Mystery of the Stove

Trip report for: [workhike] HMVDITTRAH 2019 – 4th annual How Many VOCers Does It Take To Replace A Helicopter?

Mystery of the Stove

As this was my first ever VOC trip i was more than ready for the  5:30 wake up.  I was picked up first at 6. Pickup ross 6:20, Pickup Victor 7:00. Zoomed down the sea to sky. Pit stop in Squam for Mcdonalds breakfast, and at our driver Martin’s friends house for a 7:30ish AM pesto delivery. Quick pitstop in Pemby to fill up on gas for the adventure ahead.

Our fellowship was split into 2 cars. With our first objective to rendezvous at the entrance of the road leading up to Phelix Hut.

Ross was telling us in our car that the stove was likely going to be brought up this weekend concurrently with our workhike. The mere thought of a single man carrying up the stove stirred up excitement and intrigue as we all wondered what it would look like for someone to hike up a 100+ pound stove up a mountain. I kept my eyes open in the hopes of capturing this feat.

At the Birkenhead lake turn off we were surprised with some very timely reinforcements after many people were forced to bail. Another car of three was more than welcome.The road was not too difficult for the vehicles, we maneuvered around a couple large boulders and through a few rockslides and parked by the one log bridge hoping to avoid problems with the water crossing. The hike up was pleasant, the July rains brought about a lot of plant growth, where plants such as ferns and such grew to about stomach height in some sections. One of our members had found some mushrooms called Bolete which were to become a part of our dinner.

Upon finding the stash of timber rounds we loaded up our already full packs with as much timber as we could and walked the last 20 minutes around the lake to Phelix Hut. To my chagrin the terrain turned marshy and muddy quite quickly, I regretted opting to bring my approach shoes instead of my hiking boots to march through the mud, thankfully they dried quite quickly even as we walked and passed many small streams weaving and carving channels through the path.

The wildflowers were quite beautiful, but alas I do not know any of their names, which I hope to learn in the following work hike the next coming long weekend for the stove installation.

We were quickly greeted by the resident mosquitoes who were quick to tithe us of our blood as the price to enjoy the beauty of the mountains. Receiving three bites to face in the first 30 minutes I was quick to don my rain shell and go ninja mode with my buff trying to cover as much exposed skin as possible. 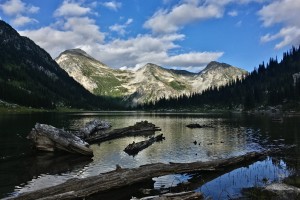 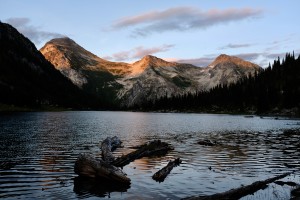 We found the cabin empty of people but found a stash of packs in the corner waiting for their owners to return from a hike or scramble. We were quick to unload our packs of our belongings and turn back to begin the hauling process. Opting to use one of the external frame packs It was imperative that I learn quickly some basic knots to attach these massive timber rounds to the frame (thanks to Victor and Nick for giving me a hand with that). With the muddy summer terrain, wet, dirty footwear was the norm.

For the first day most of us did around 5 rounds of timber carrying. It took around 45 minutes to an hour to bring a load back to the hut. 20 minute hike to the stockpile, 5ish minutes for loading and around 25-30 minutes for the hike back to the hut. Each load feeling heavier than the last. I forget the time with which we finished hauling, but dinner was the most immediate topic on all our minds. The mushrooms we found became the star of the table as Ross cooked them up with butter and salt. Team Nick’s meal included Annie’s Mac and cheese. Team Martin opted for some quinoa, salmon and garden vegetables. More than enough dessert was brought. Sometime during the washing up Martin managed to slice a deep gash on his thumb trying to crush a can of salmon with his hands to flatten it out. With Victor’s skills and combination of Nick’s first aid kit and my knife and misc tools, we managed to patch up Martin’s thumb well enough. With our appetites satiated and the washing done, we did a bit of group yoga and stretching. The next most obvious thing to do was to sing. With Nick at the guitar people joined into the choral accompaniment freely as they felt comfortable. 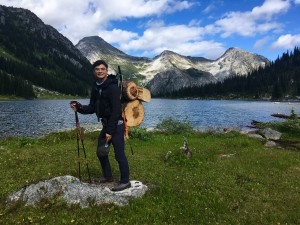 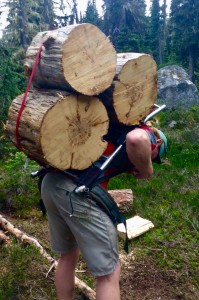 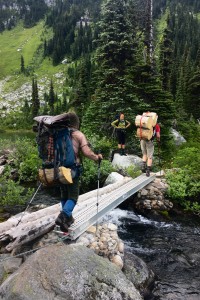 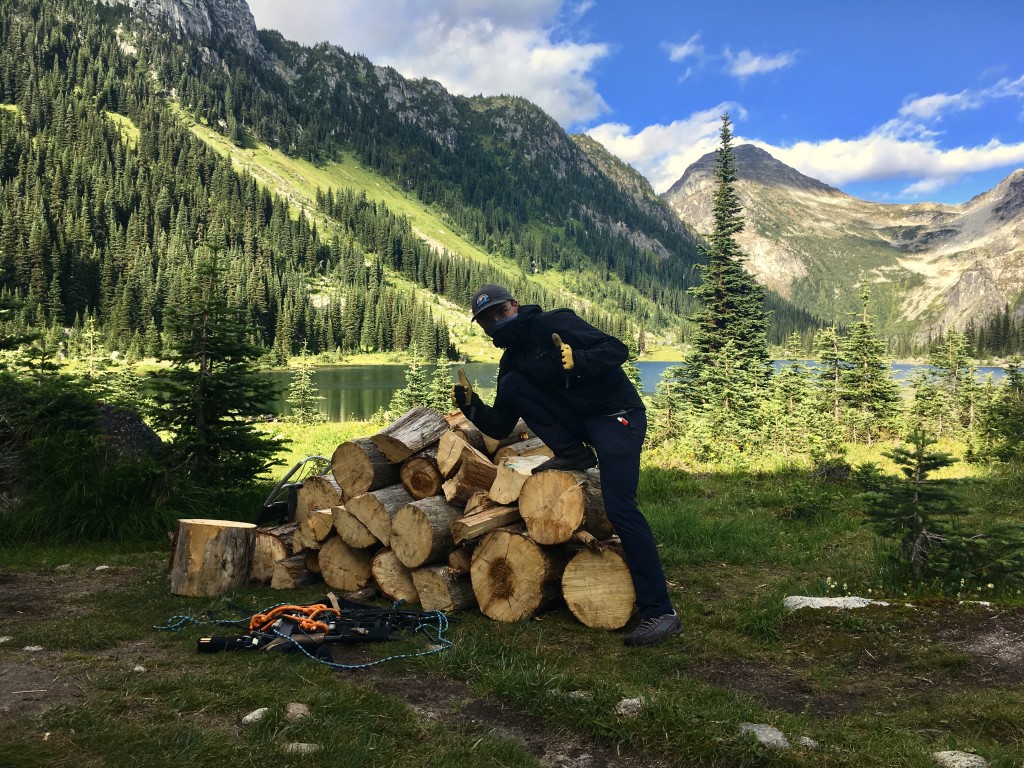 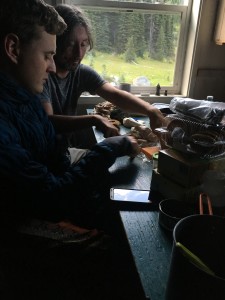 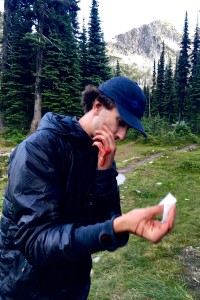 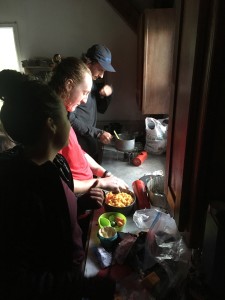 There was no sight of the stove that day, so we surmised that it would be Sunday, that the stove would be laboriously hauled to its final destination.

The sleeping was good; we shared the hut with around 4 others that night. I was the first to get out of bed at 7 AM. Hoping to get a glimpse of the mountains with marmalade morning skies I hustled out. Disappointingly the sun was already well above the mountains. The mist over the lake was a pleasant consolation prize which I didn’t expect. The mosquitoes were already out and about eager from some breakfast to be taken from a sleepy camper. Breakfast was eaten quickly and we were out by 9 for the first haul of the day. After about 2-3 loads, we stopped for lunch as we pleased with our last load finishing around 1:45 in order to give us enough time to pack up and relax a little before our hike down to the car. At around 2 a couple trail runners approached the hut telling us about a car that backed up into a ditch at the end of the road. They saw a disgruntled man along with a younger man having to walk back down the mountain. The pieces were starting to fit together but we weren’t entirely clued into the stove situation just yet.

One group left around 2  to rendezvous at the one log bridge. The other left around 3 tidying up and organizing some loose ends.

We stopped briefly to marvel at the SUV stuck in the ditch and the Land Rover that was parked beside it ready to pull it out if possible with its winch. 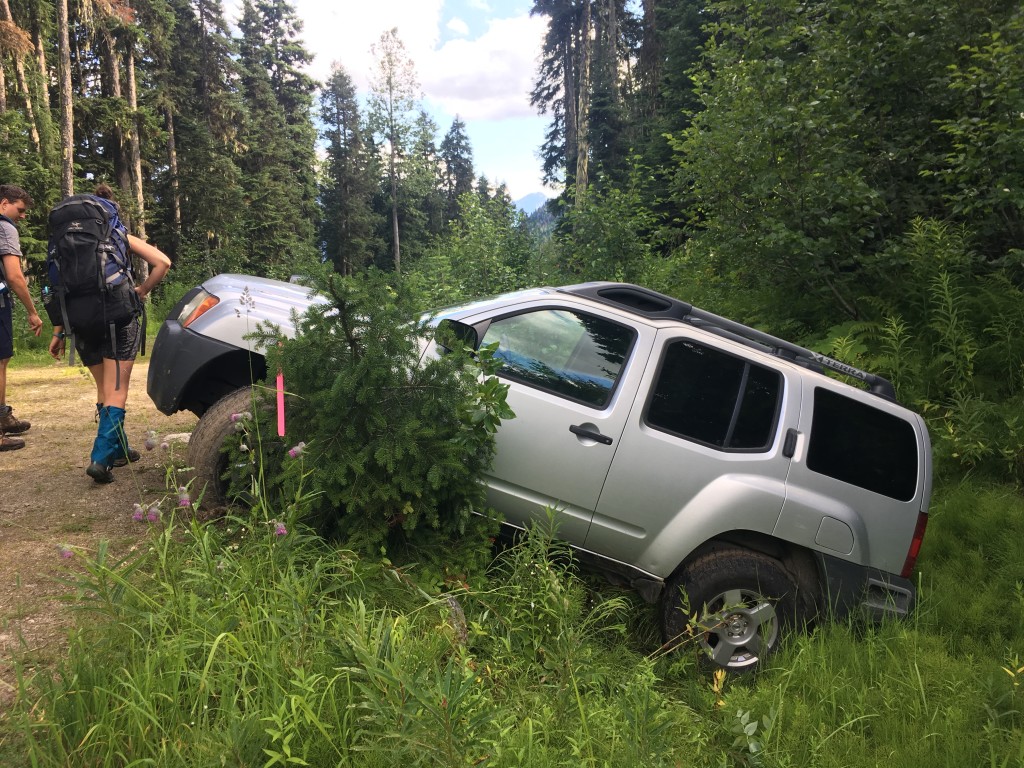 We were informed by the first group that the SUV was in fact Jeff’s car as they spotted the stove in the back, something our group failed to see. That was the last piece of the puzzle solving the mystery of the stove.

We contemplated breaking the window of the SUV if the car was left in gear, and waiting around for the trail running couple to return so we could tow it out with their Land Rover. Alas the car was not in gear and we didn’t want to damage the whole system in order to pull the car out. So we departed for Birkenhead lake for our final swim of the trip. Unfortunately, there were a lot of people, especially young families present, so in respect to them those with bathing suits opted to wear them, and those without skinny dipped in the water that was hidden from virgin eyes by the pier.

Our last stop was going to be Splitz Grill in whistler for a spot of dinner. Nothing like a few well earned treats after a hard days work.

This entry was posted in Special Reports, Trip Reports, Workhike and tagged Firewood. Bookmark the permalink.