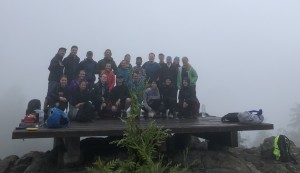 Although the meteorologists had lied again and it was not just light-showers but massive downpours in the morning, a large group of VOCers were motivated enough to meet at 6:15 am by the UBC bus loop, to start our journey. The plan was to catch the 8 am ferry to Bowen Island and then get an early start to our 15km hike up to the summit of Mt. Gardner from Snug Cove, which would entail 800m of elevation gain. 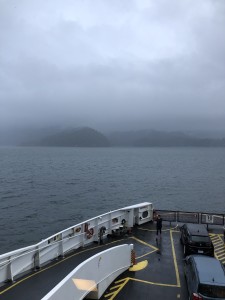 On the way to Bowen Islan

Although it was cold and wet outside, after a warm coffee and snack on the ferry we were ready for the adventure ahead!

The beginning of the hike towards the trail-head was along a main road, where you would hear the distant scream of “car!” every minute or so. However, soon the trail branched off the road and we found ourselves hiking along a lake until we hit the start of the steep ascent towards the summit.

Although there were junctions where we had not been sure which path to follow, and our larger group had split into multiple smaller hiking groups, we managed to use the little amount of cell reception we could find to communicate and plan our route ahead.

After having pulled ourselves up to the South summit through “advanced terrain” with some ropes, we all deserved a lunch break and a beautiful view… we however only got one of these as it was still extremely cloudy, and thus the view mainly depended on imagination. 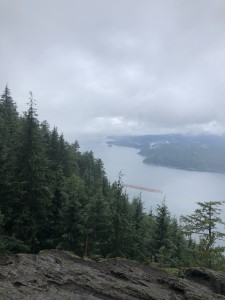 Cloudy views just before getting to the South summit

We then started our descent back down to Snug Cove, and arrived there at approximately 1 pm having just missed the last ferry by 15 minutes, with the next one only leaving at 3:15 pm. So we decided to enjoy some warm coffee, hot chocolate, ice cream and tacos on the pier, to the company of some live music. 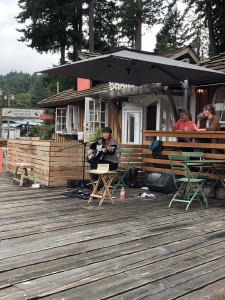 While we did not get the beautiful views of the Howe Sound we had hoped for we met some great people and new VOCers from all across the world instead, including exchange students from Sweden, Germany, and Scottland.