The Harrison Hut is my favourite hut of all time. It’s the hardest to get to, but that’s okay, since I’ve never enjoyed jammed-full huts.

Back in 2010 the largest landslide in Canadian recorded history ruined the access to the hut, and some people spent the next few years really busting their ass in a way that hasn’t been seen much since to build a 13 km new trail to the hut.

Recently the powers that be have put gates on the Lillooet South FSR to make things more of a challenge. A few of us have been to the hut since the gates went up, and it’s suffering from neglect. There’s been some discussion about what to do, so I thought it was time to do something. Back in the day, before any trail work was done, the keeners looked at topos, thrashed around in the underbrush, got turned around, went back to the topos and trashed again until a reasonable route for the trail was established. Following in their lead, I decided it was time to thrash.

The Lillooet FSR, which runs on the north side of the Lillooet, is plowed all winter and isn’t gated. It goes all the way up to where Meager Creek joins the Lillooet. In the spring and summer melting snow makes the Lillooet a raging bastard. The government hydrometry data shows that it varies from 150 to 600 cubic metres per second. People have crossed it in the winter when it’s less than 20 cubes a second. I wanted to find out if it was reasonable to cross there in the fall, because that would take care of another season. 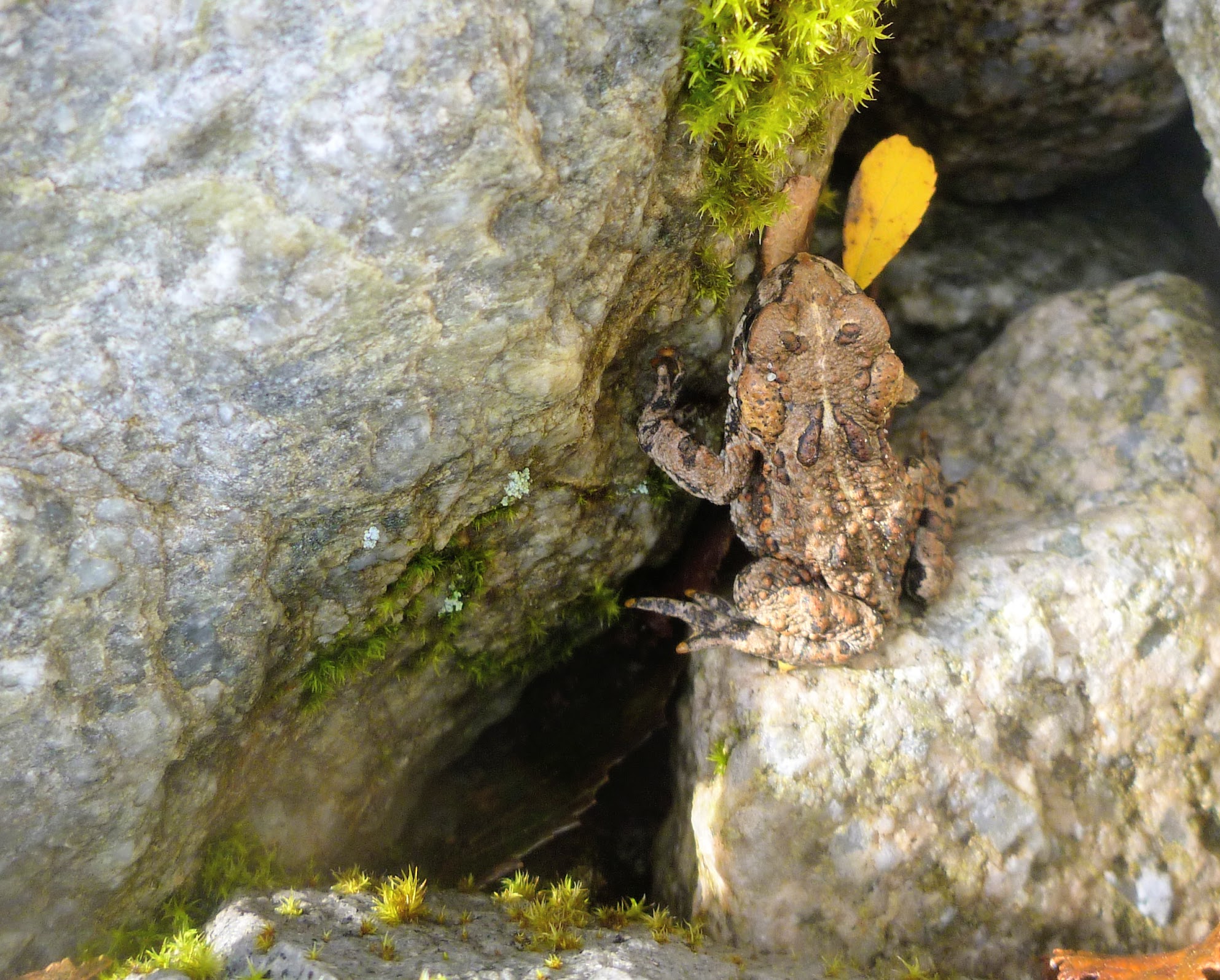 This is a frog. 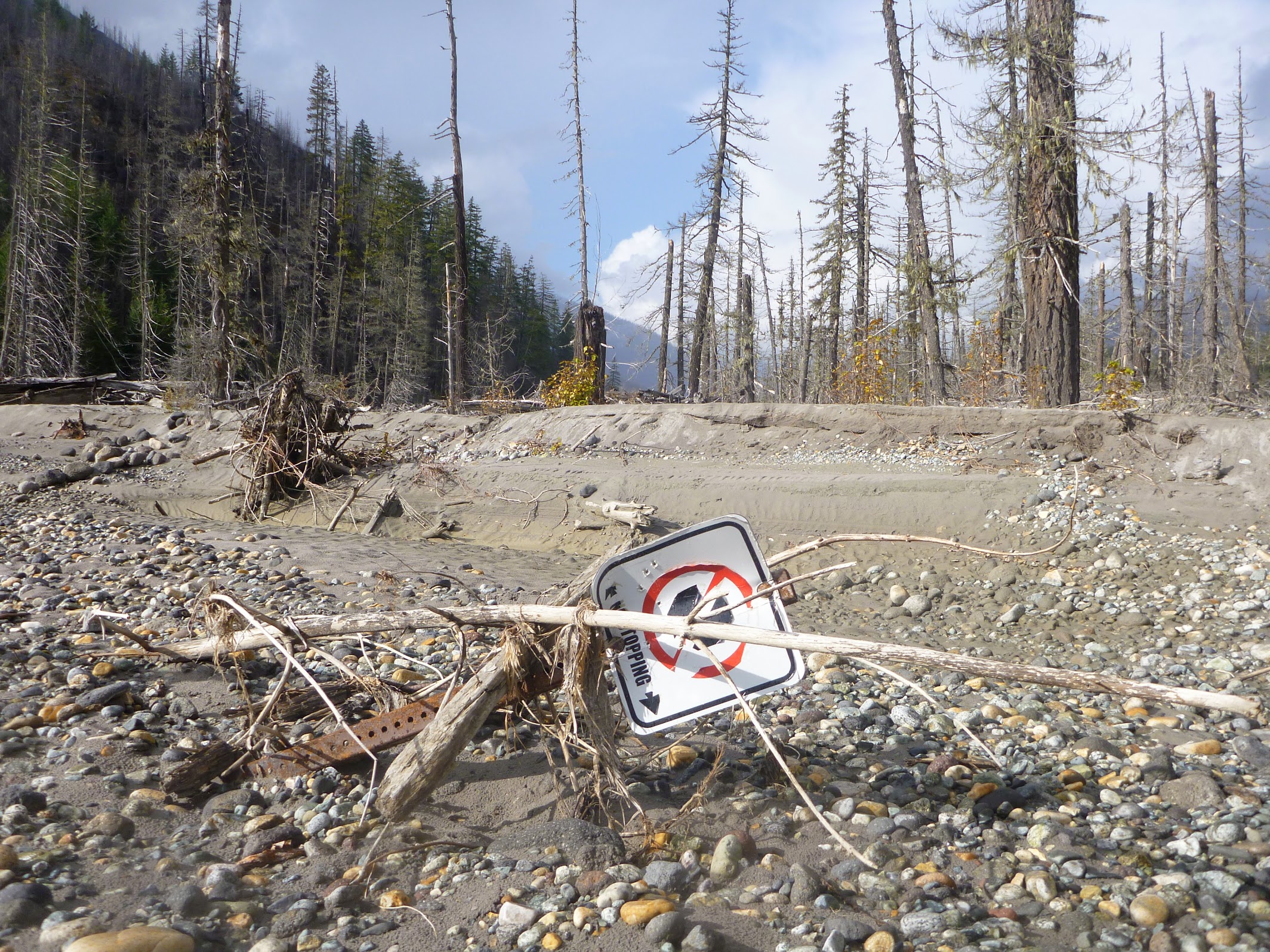 No stopping. The landslide did not stop for this sign.

The government hydrology website gave the current flow at 45 cubes per second. I’d been out skiing with Devlin on Cypress (the mountain, which is a long ways from Cypress Bowl where the ski resort is) the day before, and we got back late, so I was pretty late getting out the door. I realized I forgot my poles, so I stopped at the Turkey Sale in Whistler and got some discount poles after wiggling past all the turkeys.

When I got to the appropriate place along the Lillooet FSR, it was definitely time for strawberry yogurt. Afterwards I paced around about a kilometre up and down the river looking for a good spot to cross. I saw a frog but not a great place. About 2:00 pm I decided that I knew where the best place was, got into my undies, and gave it a go. I got my underwear wet, and the turbulence around my poles was causing a resonance phenomenon—hydroelastic flutter—that had the poles wiggling in a manner reminiscent of Elvis leg when climbing. I was having to lean hard into the current, balance was difficult, and I was a third of the way across. I decided it was too rich for my blood and backed off. I tried the second most promising place and verified that it was moderately worse. An hour later I’d tried all the other contenders and decided that nowhere reasonable was going to go, so I wandered upstream further. I’d been resisting doing so because the bank on the opposite side looked totally sketchy: steeper than the angle of repose right into the river, loose, thorny, and with the useful vegetation burnt out.

Despite the bank being awful, the fording looked like it might go. There was a big shoal in the middle, so at least there’d be an intermission. I’m not really convinced that it was any better than the first place I tried, but I’d had some time to get stupider, so I made it to the other side.

The bank went about as well as it looked like it was going to. When I got to where it rolled over, I had a good thrash around in the burnt-out spars mixed with thorns. I probably should have put some pants on, but my undies were dripping wet, so I didn’t.

I found a logging road and followed it to where the main slide came down Capricorn Creek. From where I was it would have been easy to get to the hut, but it was getting late, and if I’d done the hut and back it’d be the middle of the night when I was trying to back through the Lillooet, which I didn’t like, so I turned around. 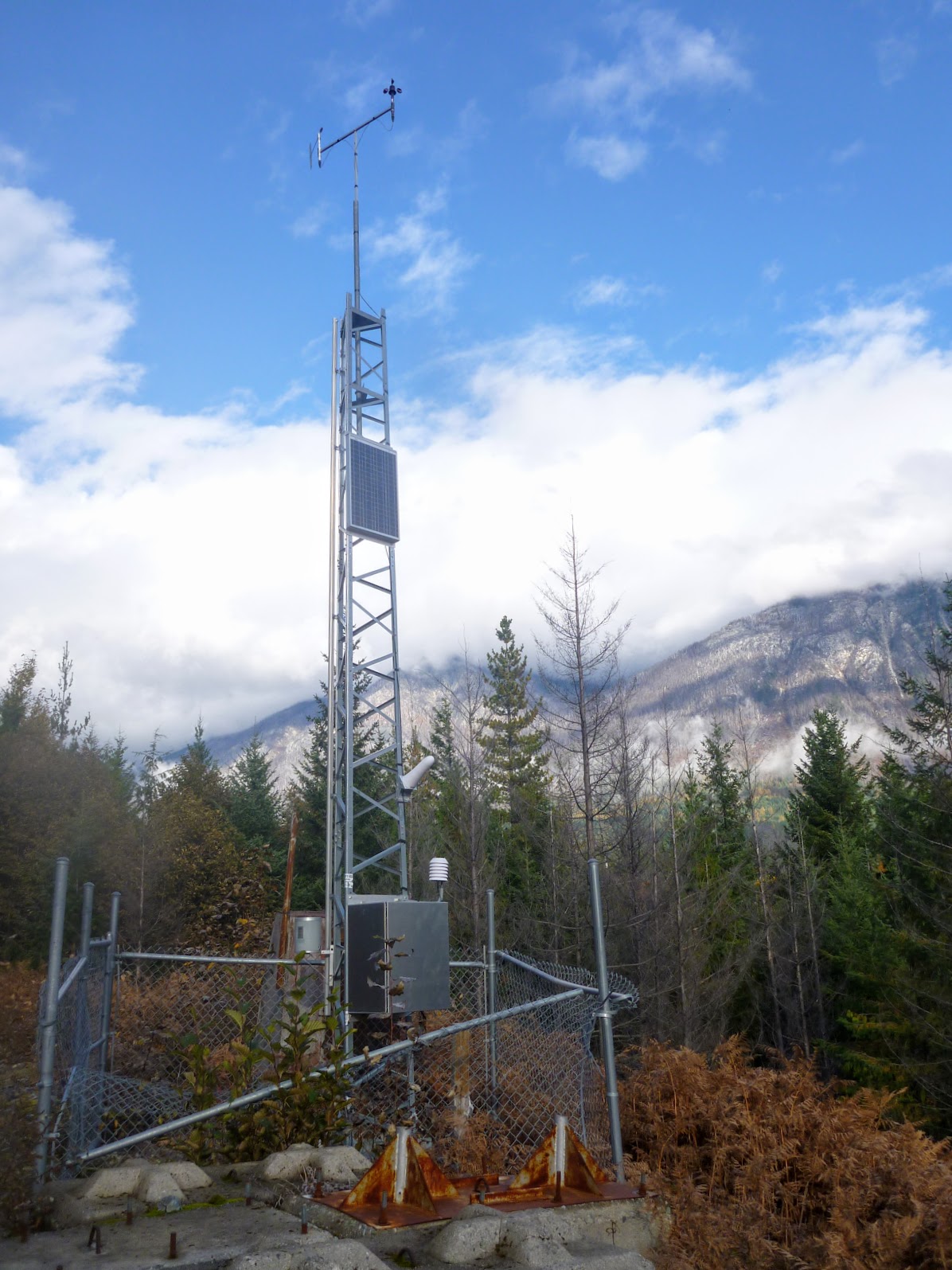 There was a weather station on the logging road. 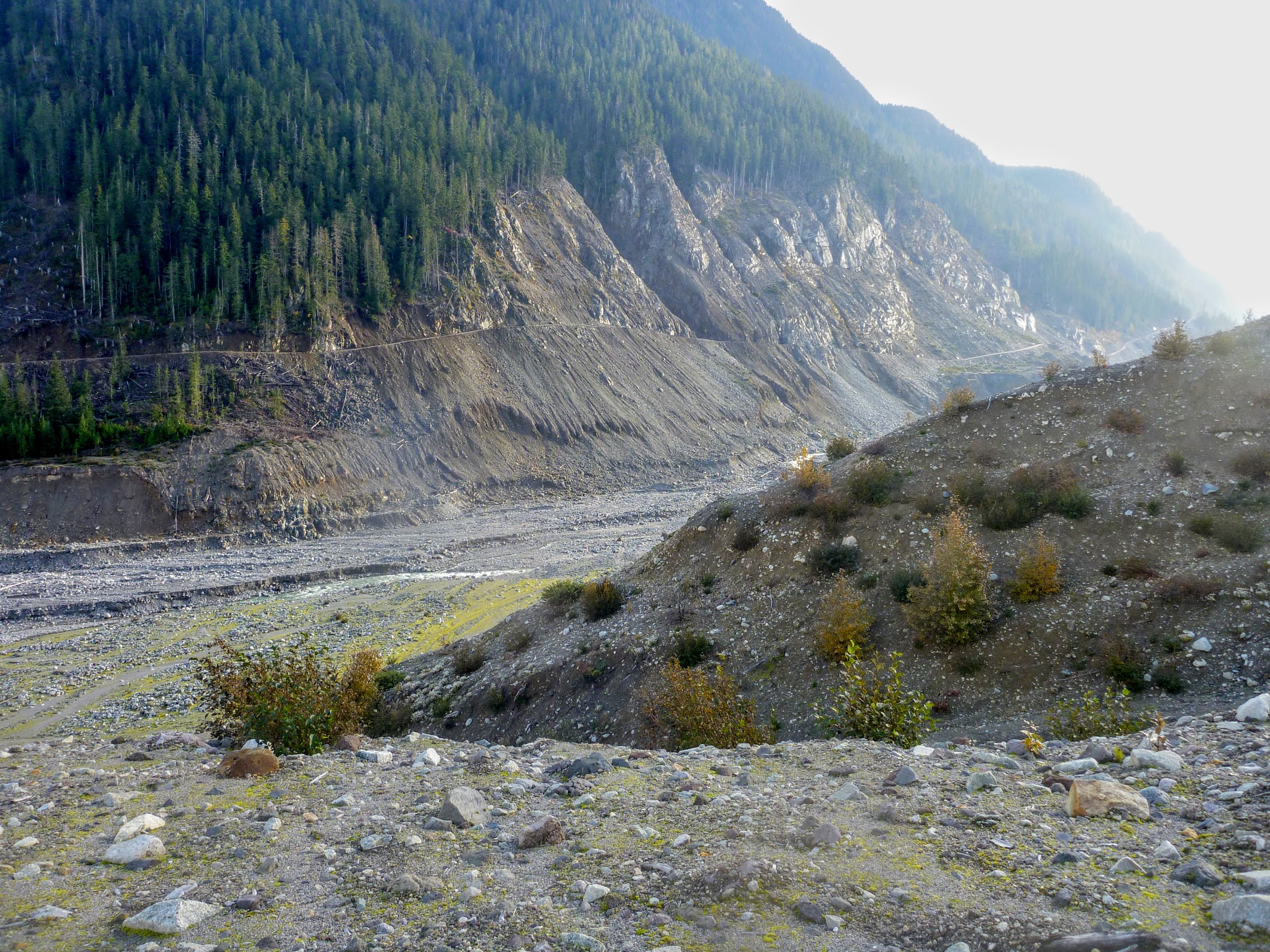 This gives a good view of where the landslide sloshed up the side of Meager Creek. It came down Capricorn Creek (on the right), crossed the Meager and made it up 300 m or so, taking all the trees and all the soil such that few new trees have started. 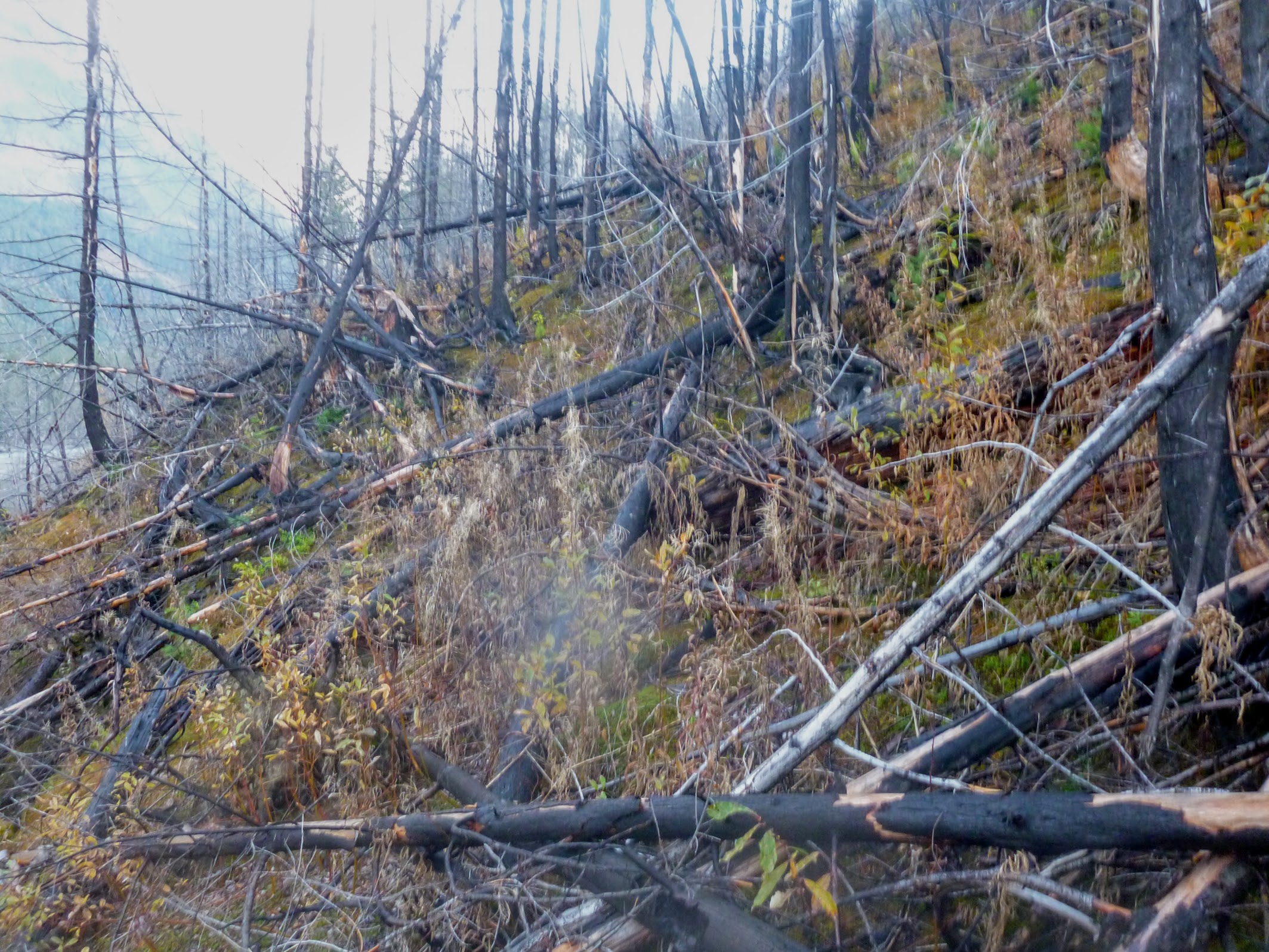 Did I learn anything? Probably. 45 cubes a second is the upper limit for me, and I’m a big fat guy, so I’m thinking it’d be a tough go for anyone under 200 lbs. Even 30 cubes, though, is probably okay for most adventurous types, as the force from the water scales as the velocity squared. The hydrometery data shows about four months below 30. If it’s not at the hairy edge, crossing just upstream of the old road, where the bank is still totally reasonable, would work just fine and eliminate hacking through the burnt area and the brambles. It’d be nice to have a year-round solution, but a third of the year is better than none of the year. 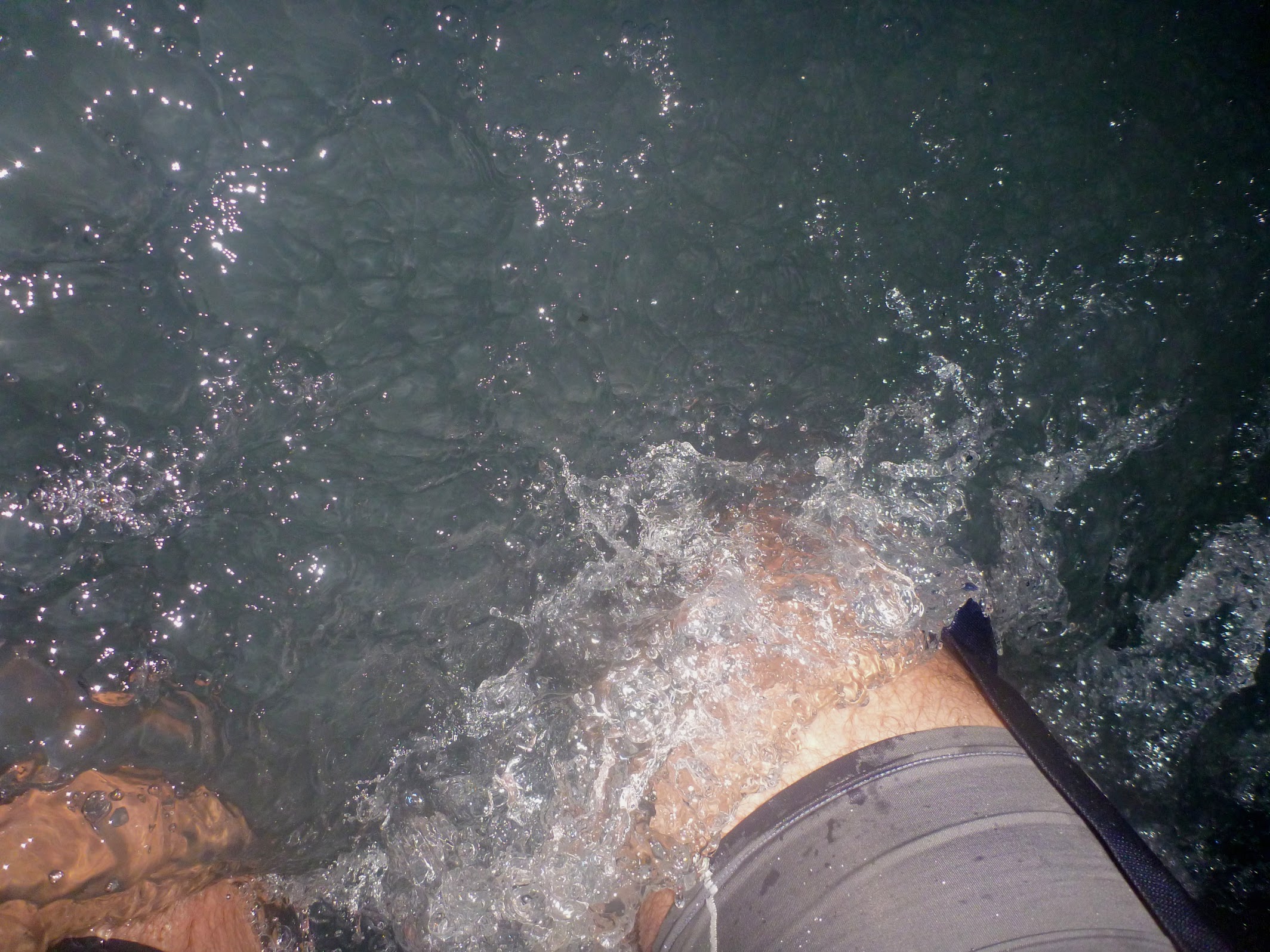 This wasn’t the deepest or fastest point of the crossing, but it’s the picture I have because I didn’t feel like farting around with my camera while my nards were flapping in the current.