Posted on March 24, 2020 by Cassandra Elphinstone

After a week at the International Tundra Experiment (ITEX) Meeting in Parma, Italy (Sept 9-14), I had a free week (Sept 15-21) before I needed to visit a lab in Vienna, Austria. For years, I had wanted to visit the Alps. This seemed like the perfect opportunity (with the exception of the fact that roughly 6 months earlier I had knee surgery and was still returning to hiking/scrambling).

Before leaving Italy, I joined the conference participants on a hike up Mount Prado and Mount Sasso del Morto near Tuscany. It was wonderful hiking with Arctic and alpine botanists. First, we took a chairlift up into the hills and then began the hike to Mount Prado.  Some of us also made a short scramble up Mount Sasso del Morto. I learned a number of new species and was surprised by how many of the alpine species resembled those that I study in the Canadian Arctic. The next day we drove back to Parma and I caught a train to Milano. For this trip, I got a Eurail Pass. From Milano, I went by train to Zurich, Landquart and finally to Davos, Switzerland. The train stations seemed right out of Harry Potter although I didn’t notice any fractional platform numbers. It was fun seeing the countryside of both Italy and Switzerland zoom by. Late in the evening, I arrived in Davos. I met my friend, Esther Frei, at the train station. Esther and I both worked at Alexandra Fiord on Ellesmere Island in the Canadian High Arctic in 2014 and 2015. We had stayed in touch at conferences. She knew how much I wanted to explore Switzerland, so she and her partner, Martin, agreed to take a week off to go hiking with me.

The next morning, we decided to start off with a shorter hike to see how my knee would hold up and give ourselves some time in the evening to plan the rest of our week together. We settled for a hike up the Hausberg (house mountain) of Davos, Büelenhorn (2800m). Each village/city in Switzerland has its own house mountain which is a prominent peak near the city. To reach the trailhead, we took a bus toward Dischma.

The mountains in Europe are filled with domestic animals. We saw a number of small huts, pastures, and cows on our hike. The views from the top were spectacular. In one direction you could see all of Davos and the beautiful blue lake it is situated on. In the other direction, mountains stretched as far as the eye could see. 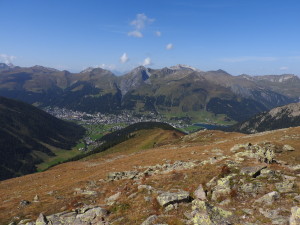 We returned a bit earlier than expected to the city and decided to visit the Swiss Federal Institute for Forest, Snow and Landscape Research. They took me to see the avalanche forecasting room, cold chambers for making fake snow, and the CT scanners for getting 3D models of the snow pack. It was clear Switzerland puts a great deal of effort into forecasting avalanches. I guess this is what you get when you combine a group of people who have lived in the mountains for so long with the tools of modern technology.

In the evening, we went to visit Christian and Sojna’s (two other ITEX members) house for an amazing cheese fondue dinner. It was a perfect end to my first day in Switzerland.

The next day, we decided to do a longer day hike. I wanted to visit one of the older ITEX sites in Switzerland called Val Bercla. We decided to do a ~15-20km traverse from Juf to Mulegns, though Val Bercla. We caught the train and then the bus to Juf, which is the highest village in Switzerland, at 2100m. Then we hiked up to a pass and down into Val Bercla under the Piz Platta. We set the ITEX site up for winter by taking down the electric fence that protects it against cows. The last time Esther and I had taken down an electric fence together was in the Canadian Arctic to protect against polar bears. In the afternoon, we hiked out to Mulegns and took the bus back to Davos. We arrived back in Davos late in the evening. 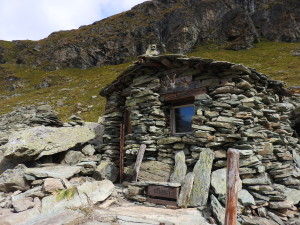 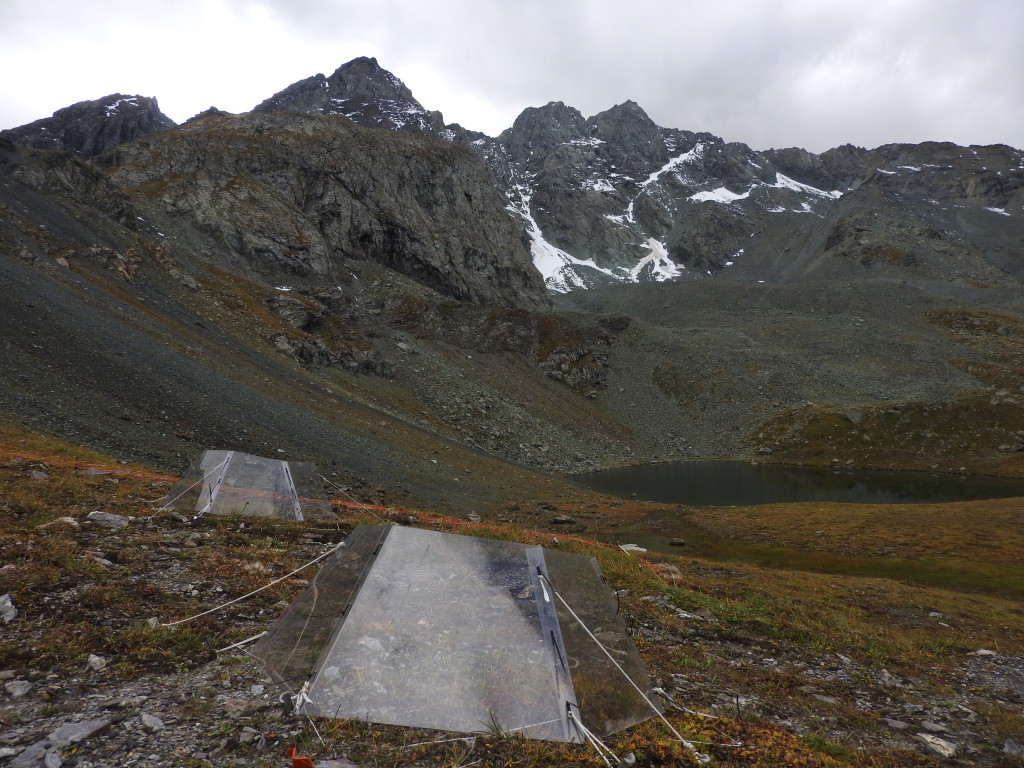 Dryas octopetala – the species I am studying for my PhD. Photo: Esther Frei

The next day we spent on the train traveling to the Canton of Valais in Switzerland. I had been in contact with Tobias Klenze (a VOCer of old) and was hoping we could find a way to meet up and do a hike together. On the train ride, we called Tobias and he decided to come meet us at the hut we were heading to that night (Loetschenpass hut, 2690 m). After nine hours of riding the train, we reached the town of Wiler. In Wiler, we saw the wooden masks and sheep skin costumes of the ‘Tschäggättä’ which are used in February to scare away winter in the area. From there, we caught a chairlift up into the mountains. 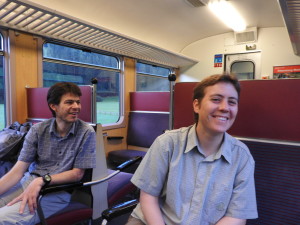 Riding the train with Esther and Martin 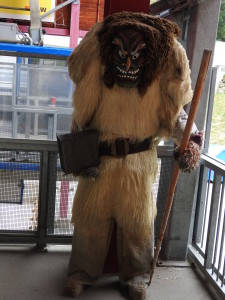 After eating a bit of food at the top of the lift, we started up the trail heading to Loetschenpass hut. It was my first overnight backpacking trip after knee surgery so we did not hike up very quickly. On our way up, we were surrounded by some spectacular views as the sun began to set. We spotted the first ibex I had ever seen and met some Valais Blacknose sheep. Oddly, a few of these sheep became excessively interested in my hat. They were apparently craving the salt that had accumulated on it from a kayaking trip in Desolation Sound I had done shortly before my trip to Europe. 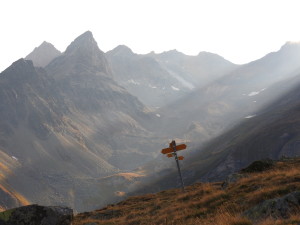 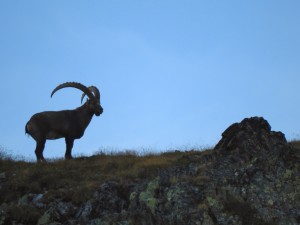 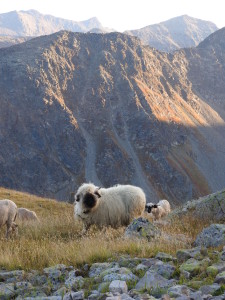 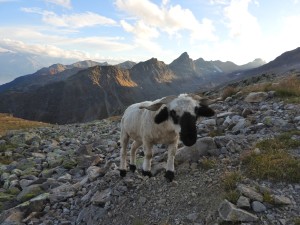 When we were nearly at the hut, we finally met up with Tobias. I had not seen him since 2015. Seeing him brought back some great memories of the Neve and Spearhead ski traverses that year. Once we reached the hut, I was amazed by how fancy it was. I had never before stayed in a European style hut. Although I had met a number of exchange students from Europe in the VOC, I was always a bit puzzled as to why they seemed to think our huts were rustic. It all became clear when I saw this hut. Once we arrived, we were served a fancy four course dinner. My -40 degree sleeping bag and sleeping mat seemed to be extreme overkill as there were complete beds with pillows and all. Everyone was given slippers for their foot size. Finally, the strange questions I often receive about whether or not the VOC huts have showers and warm meals finally had some context.

In the evening we went out and looked up at the stars. I remembered all the good times back in 2014/2015, both on Ellesmere and with the VOC. 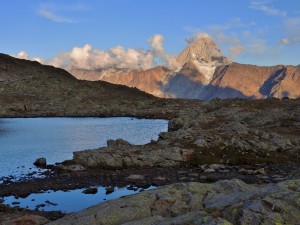 Early the next morning, after a fancy breakfast which included a freshly baked loaf of bread, we headed up the Hockenhorn (3290m). It was my first scramble after knee surgery and it felt amazing. From the summit, we could see the Eiger, Matterhorn and Mont Blanc. We scrambled down from the summit and back to the hut to pick up our packs. 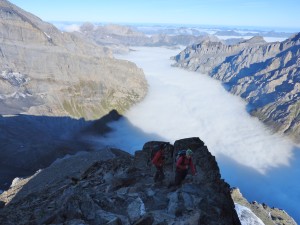 Near the hut, we ran into a whole family of ibex, including a number of very cute young ones. From there, we decided to complete another traverse and head out over the glacier (Lötschegletscher). We crossed what I believe was the Kander river to Selden. As we descended into the valley, we were enveloped in fog. It was by far the longest descent I had done since knee surgery involving about 1700m vertical. From Selden, we took a bus through some very narrow tunnels and roads to Kandersteg. Before long, we said bye to Tobias and caught the train through the tunnel to the tourist city of Zermatt. That evening, we hiked up to the mountain guest house, Hotel du Trift (2337m) in the dark as we did not want to stay in the tourist town for more than a few hours. Zermatt was beautiful and reminded me a bit of Whistler. However, we all much preferred to be in the mountains.

The next morning, we packed up our gear and set off on the Panorama hike under the north face of the Matterhorn. The views were beautiful; across the valley we could see the ski resorts and glaciated peaks. Because of a fairly early start, we met almost no one on the trails until we got lower down. We returned to the city at 2:30pm and ran to catch the train back to Davos. We decided to take the scenic route (following the Glacier Express route) (9.5 hours) and so it was very late by the time we returned to Davos. The next day was our last day together. We decided to head to the Upper Engadine. We took the train to near Saint Moritz. From there, we caught a funicular to a ridge and hiked up to the Segantini Hut, at (2,731 m). Esther had done her some of her graduate school work in the area, so she knew it very well. The landscape was gorgeous!

We returned to Davos earlier than usual in the evening to trade photos and do laundry etc. The week had flown by. Early the next morning, I found myself on a train heading to Vienna to visit a lab studying plant epigenetics in the Gregor Mendel Institute.

Each day I spent in Switzerland, I was astounded by the scenery. Each place we went blew me away more than the last. I felt like I had seen a great deal of the country in under a week: starting in Davos, then visiting Val Bercla, the Canton of Valais, Zermatt, the Matterhorn, and finally the Upper Engadine. I don’t know how the trip would have been possible without the guidance and amazing company of Esther, Martin and Tobias. Thank you!