I have been meaning to join the VOC for a few years and only recently did I finally sign up and find a trip to go on, with encouragement from Jacob Grossbard and Cass Berno among others. I was planning on Winter Longhike (attempt 2) but had to bail because I was sick. I recently befriended Haley Foladare through a Women in Computer Science groupchat and we began texting. Quickly, she organized a “chill” day trip to Red Heather Hut in Garibaldi Provincial Park on Sunday March 15, 2020. It turned out to be mostly chill and totally awesome! Almost too awesome for anyone’s first VOC trip, I was later told. 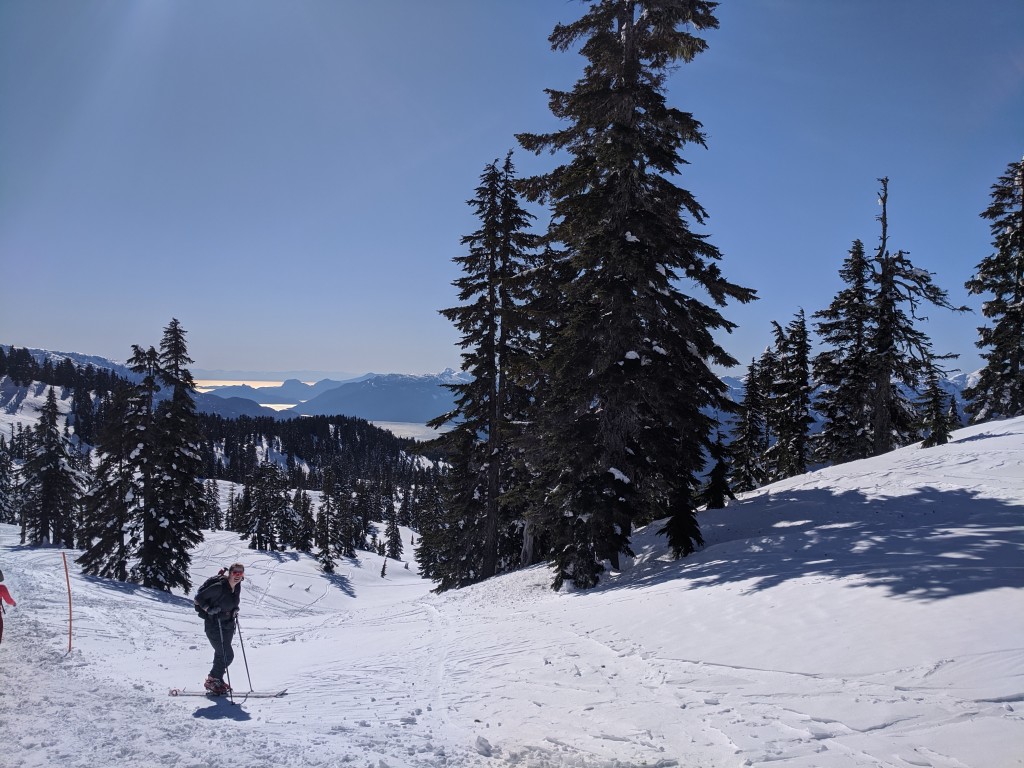 Me (Melissa Bernstein) posing on Round Mountain, with Howe Sound in the background. (Picture by Jacob Grossbard)

After a wonderful quick breakfast stop at Cloudburst Cafe in Squamish (would highly recommend), Haley, myself, and Kylie Schatz made our way up past Quest University to one of the south entrances of Garibaldi Park.

A day of firsts

Besides from being my first (relatively) organized VOC trip, this day was my first time stepping foot (or ski) in Garibaldi Provincial Park. I have lived in Vancouver for over 2 years now and I was stoked to finally see what all the hype was about!

As we climb up the gravel road, we get stopped by a park ranger who kindly asks us to put our chains on. Being the considerate helper I am, I excuse myself to go pee while Haley and Kylie struggle in the morning cold to shimmy the chains onto the wheels. When Haley starts complaining, I help out quickly and we get on our way up the icy road.

When the rest of the group gets to the upper lot, everyone is excited and ready to go! We begin our skin up the well maintained winter trail to Red Heather Hut a little after 9:00am.

We go at a casual pace, with plenty of time to drink water and enjoy each other’s company. Soon my only real negative part of the day starts to develop – blisters. With the VOC’s lovely modern collection of 1980s Tele equipment, I was enjoying a 5 star treatment of luxury textured sandpaper on the heels of my feet. Despite Jacob’s insistence on stopping to fix my red boots after 20 minutes of skinning (15 minutes of me complaining), I ignore him, tighten my boots a little bit and persist on. As I was told, some discomfort is required, especially on your first VOC outing. 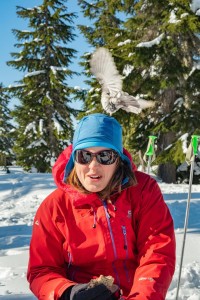 When we reach the Hut an hour and a half later, we call it lunchtime. It is beautifully sunny, so we skip the hut and enjoy our packed lunches outside.

Our lunch was relaxed except for Vin Sanity’s panic as the birds try to eat his food. We become quickly entertained with the birds as Vin tries to capture their friendly attacks on our group.

I then take the opportunity to fix my boot blister situation. I ventured to the not-so-warm-shouldv’e-just-stayed-outside-in-the-sun-Red-Heather-Hut. I thought my left foot was fine, but actually came to discover a sizable blister. My right food had three small blisters. Lovely, I thought to myself. This will be enough proof to say that my day wasn’t all rainbows and butterflies. With purple duck tape courtesy of Christina Wiesmann, I covered up my blisters, popped some ibuprofen, and slapped a smile on my face.

Are we going down yet?

At lunch time, I knew we were planning on going up a bit higher to ski some laps. Thankfully, the skin up was only another 30 minutes on low-grade tracks. Me (Melissa Bernstein) skinning above the hut, pretending she is Jessie Diggins, Olympic Cross Country skier from Minnesota, minus the gliding part.
Photo by Vin Sanity. 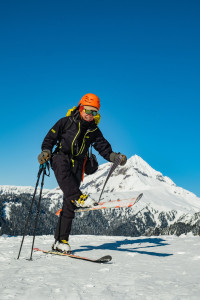 Vin Sanity being super cool and taking off his skins while standing. (Photo by Emily Kuang)

After deciding to go up “only a little higher” we make the decision to start our decent down Round Mountain, called so, I presume, because the maximum grade we ever skied on was max 15 degrees. We all admire Jacob’s ability to take his skins off while standing, but of course it’s Jacob, so no one is surprised. We do manage to get a picture of Vin doing it, though.

We go one at a time down the slope. After lots of cheering and face plants followed by laughter from the group, we all make it down to the first meeting point, about 50m down the mountain from where we started. We continue going down a little bit at a time together to the hut. 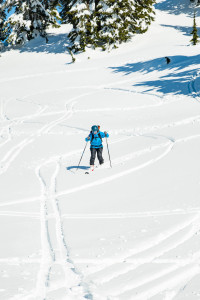 Melissa Bernstein trying her best to look cool tele skiing. Later, she realized that everyone who tele skis is cool. (Photo by Vin Sanity)

Out of everyone in the group, most have an AT ski setup. I on the other hand have a wonderful red set of the club’s tele gear. I went once before – night skiing at Seymour, learning from Jacob. Sam Shulman is in the same boat as me on tele skis, but he had never skied tele before. Sam had some trouble early on, but we told him he could just pretend he was on normal downhill skis and he was soon flying (quite literally) down the mountain. Later, he swapped with Jacob for an AT setup, and he was one very happy skier. I wasn’t going to let my seeming disadvantage hold me back from looking super cool, after all, that was my becoming my only goal of the day.

I grew up cross country skiing in Minnesota and had tried the tele motion before, but on wide, heavy skis in deep wet snow, it was a bit more difficult. I managed to get the hang of it after face planting a few times and was soon linking relatively pretty turns down the slope. Jacob complemented me – but he might have just been acting nice, cause that’s how he is. Nonetheless, I owed it to him for teaching me that night at Seymour. Of course, when he switched to Sam’s tele setup, I only complemented him once because I can’t let him develop a big ego. (He’s really good at tele skiing, but don’t tell him).

After two laps for most of us, we decided to ski down to the car. But not without a group photo first. 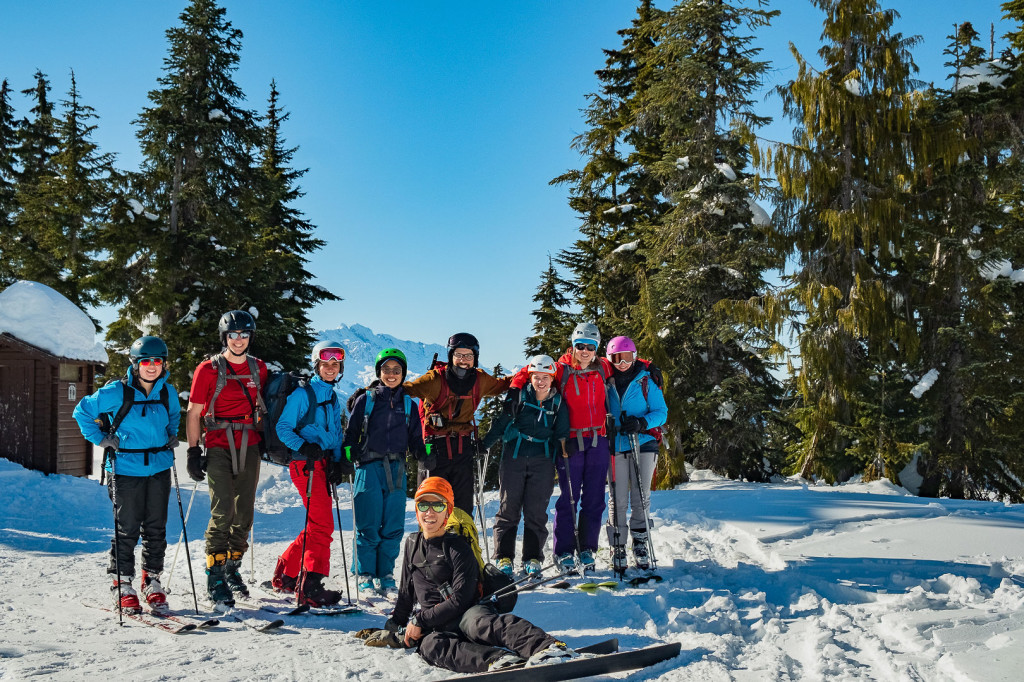 Most of us then ventured down the access road, past the hoards of mountain bikers enjoying Squamish’s extensive trails, to the Essence of India restaurant where we filled up on samosas, curries, and chai tea with too much unrefined sugar.

Soon, we were on the road again, driving along the Howe Sound which we saw from our vantage point earlier.

As the sun set and I sat in the backseat, I reflected on the day. Overall, it was an amazing day. There was no doubt. Despite from my blisters on the way up which would rate the fun designation a Type 2 according to the VOC Glossary, the sunshine, views, and wonderful company brought me to the conclusion that this trip should be rated a Type 1.5 Fun day. 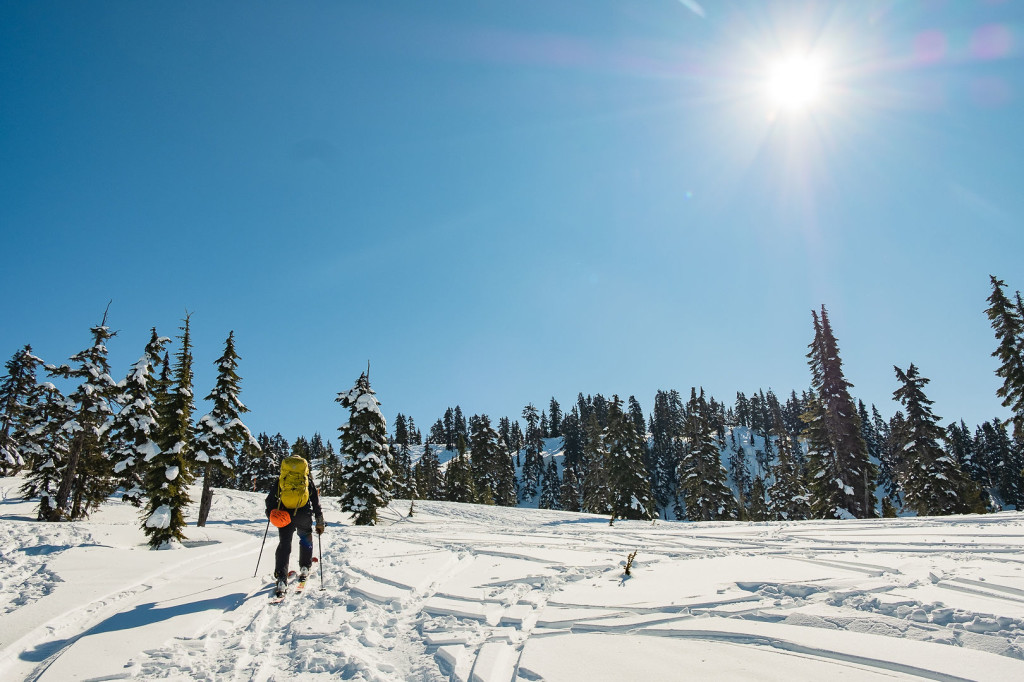 Before going on this trip, I asked my roommate what ski touring was like when he went that one time years ago. He said it was like a walk in the snow with heavy skis, and the skiing down part was an added bonus. I would agree with him for the most part. But this day was more than that for me. It was a step into an activity I had never done with a bunch of people I (mostly) had never met. I am frustrated it took me over two years to finally join the VOC trip, but I look forward to the many more adventures I’ll go on before I’m done with my time in Vancouver.

I want to extend my utmost gratitude to the whole group for being such wonderful and “chill” people to ski with on my first ski touring adventure. Additionally, I’d like to thank Jacob for teaching me the basics of tele skiing that night at Seymour so I wouldn’t make a fool out of myself when I finally went touring, and also for encouraging me to finally go on a VOC outing! Also big shoutout to Haley for organizing this trip and answering all of my questions about what to pack and wear and reassuring me that I’ll be a good enough skier for Round Mountain’s tame slopes. And last, but not least, to Vin Sanity and Emily Kuang for taking excellent photos on our trip! You both truly captured the days awesomeness. 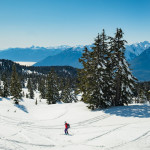 A view of Howe Sound near Squamish featuring Charlotte Nelson. Some might say this is too pretty for my first VOC trip. (Photo by Vin Sanity) Jacob Grossbard skiing casually like this is the easiest thing he’s ever done. (Photo by Vin Sanity) The low-grade slopes above Red Heather Hut on Round Mountain. (Photo by Vin Sanity) 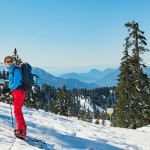 Kylie Schatz questioning her existence as she is forced to skin up on her splitboard for only a mellow grade descent. (Photo by Vin Sanity) Vin Sanity posing with so, so much style. (Photo by Emily Kuang)

Considering the recent changes to our daily lives due to the rapid spread of COVID-19, I am going to cherish this day for a long time. Being based in Vancouver, with a short commute, one can ski, bike, and swim, all in the same day. I hope we can all soon be outside enjoying our backyard like we used to.

Till next time, Melissa Bernstein