In March, before skiing became controversial, Alex R., Dave M., and I did the Wedgemount-Currie traverse. Birgit was supposed to come, but she got a second cold immediately after recovering from the cold she had the week before. It was an excellent trip with one exception, which is what this trip report is about.

Late on the second day of the trip I—or I and Dave, it’s a bit unclear—triggered a size 2 avalanche on a very hard snow surface that wasn’t obviously softened by the sun (we skied out of it and no one was hurt). I’m writing this up in case people are interested in what we learned about hard slab avalanches, although I am mostly relaying info from Avalanche Canada and from Bruce Jamieson’s videos, because I myself have no expert knowledge here.

The avalanche happened when we were traversing a short SW slope in the bowl S of Mt Currie (see annotated photo). When we started across the slope, we couldn’t see that there was some old debris below at the base of an adjacent slope. Dave was ahead, and when I saw Alex behind I started off. I punched the slope with my pole was confident the surface was too hard to be a problem. My weight, or possibly the combined weight of myself and Dave (who was nearly off the slope), caused a slight cracking sound, and then a loud bang, and then blocks started coming down from above because the avalanche had propagated well above us. The crown line was around 35 cm, and the slope angle was around 35 degrees. 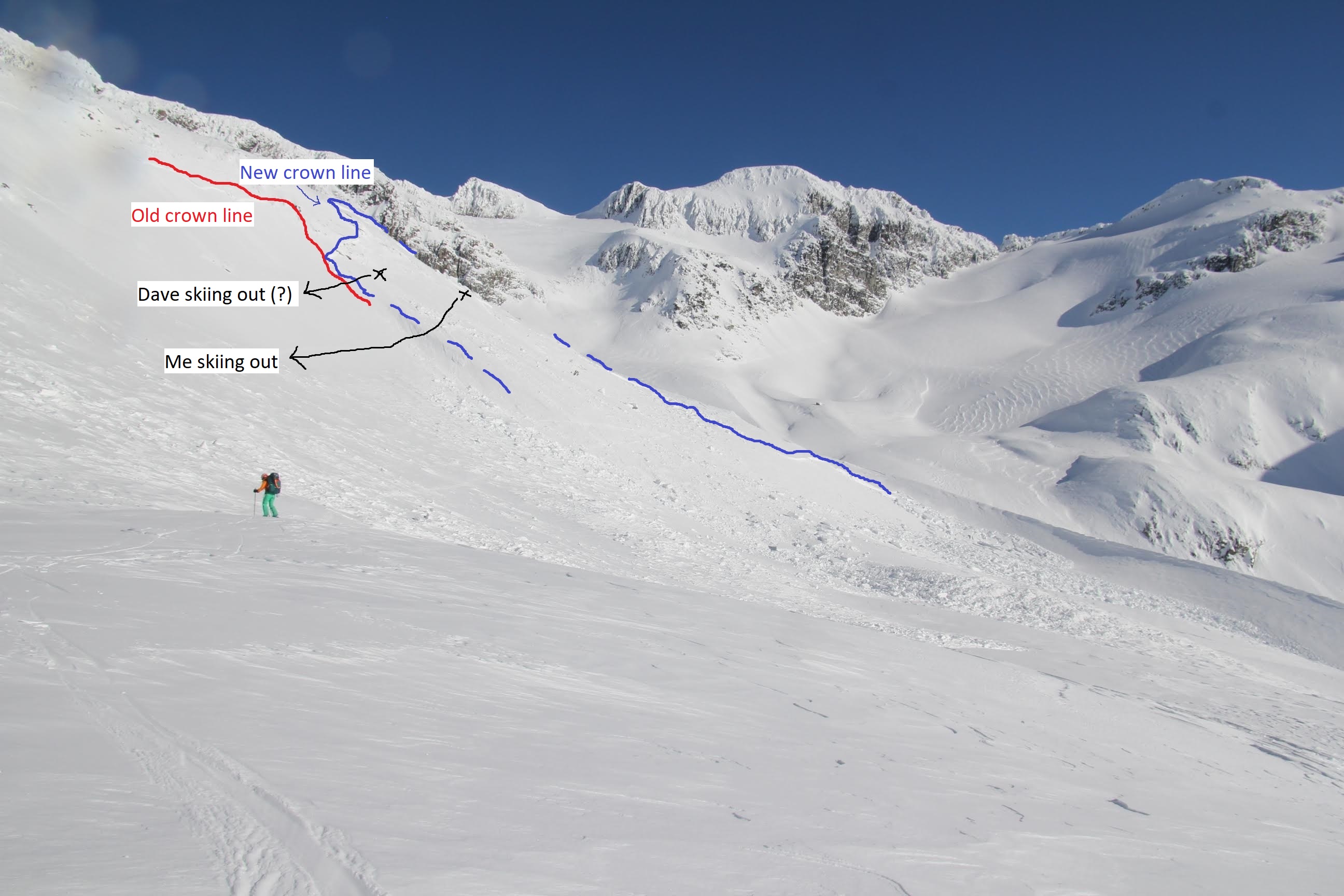 As I mentioned, the snow was very hard, like styrofoam, with no ski penetration. The hard surface wasn’t a crust over less consolidated snow—-it was hard underneath as well. I had thought (wrongly) that this sort of boilerplate was a sign of safety because it held the slab together. In fact, it turns out that hard slabs are analogous to persistent slabs: low (or moderate) probability, high consequence. A stiff, hard slab supports the weight of the skier and reduce the stress on the weak layer below (called “bridging”), and this means that hard slabs are more difficult to trigger. However, if you do manage to trigger a weak layer, the slab stiffness means that it is (i) more likely to propagate and cause an avalanche and (ii) the avalanche is likely to be larger in area. I noticed that the avalanche came down in big solid blocks, and I would speculate that being hit by them would be more dangerous than a soft slab, too. A problem with calling hard slabs low-probability-high-consequence is that the thickness of the snowpack is often variable. If you happen to ski over a thin section (i.e. short distance between your skis/mass and the weak layer), triggering the avalanche may be HIGH probability, but then it can still propagate into a big high-consequence chunky avalanche.

There were a few risk factors we might have picked up on for avalanches in general that afternoon, and we were lucky that we triggered this (relatively small) slope rather than one of the more serious slopes earlier in the day. For one thing, it had been ~-20 C the previous night, but the day of the avalanche it warmed up significantly to maybe ~-5 C. It was 4:30 PM, so the SW slope had probably been heating up in the sun for a couple hours too. We had also noticed that the snow higher up in the alpine was wind-affected and crazy variable, so it shouldn’t have been surprising that hard slabs would form in some places. As I said, what convinced me that the slope was benign was that it was that the surface did not show signs of melting—not soft or slushy. Turns out that’s probably not a good way to evaluate solar warming.

What should we have done differently in terms of decision-making? Maybe we should have weighed the risk factors in the last paragraph more carefully. Bruce Jamieson’s lab has put together a tool, called SWarm, that can help evaluate the risk from solar warming. Birgit has put together a summary of the tool, where the output is the daytime warming 10 cm down in the snowpack due to sun. The model was calibrated in Rogers Pass with drier snow, so it will tend to underestimate warming on the Coast (and there are other caveats to this model that you should look into if you want to use it!).

Our choice to zip across this slope (and other small slopes before it) as a shortcut was not the most conservative option, maybe because we were quite close to camp and eager to get there. It would have been simple, but slower, to traverse under some of these slopes on mellower terrain, although in these conditions there might have been a risk of remote-triggering an avalanche on the slopes above. There is one uncomplicated thing I should have done to reduce risk: I could have followed farther behind Dave to limit the number of people exposed to the slope at once. Alex kept much farther back, and this meant she wasn’t caught in the avalanche even though it propagated far out towards her. I and the people I ski with generally don’t space out enough in avalanche terrain, in retrospect. Finally, this was the first south-facing slope of the day. It might have been worth probing more carefully for a weak layer as we left behind the shady north aspects.

Anyway, even though this happened nearly a month ago I figured that people mostly stuck in the city might still be interested in reading about skiing (and avalanches). Captive audience… Also, I know there are some very knowledgeable people in the VOC who could correct or expand on some this.

12 Responses to Learning about avalanches