Earlier this year, my friend Liam Gilchrist and I took advantage of the first week of school closures due to COVID-19 to make our second, successful attempt at climbing the East face of mount Colonel Foster on Vancouver Island in winter. 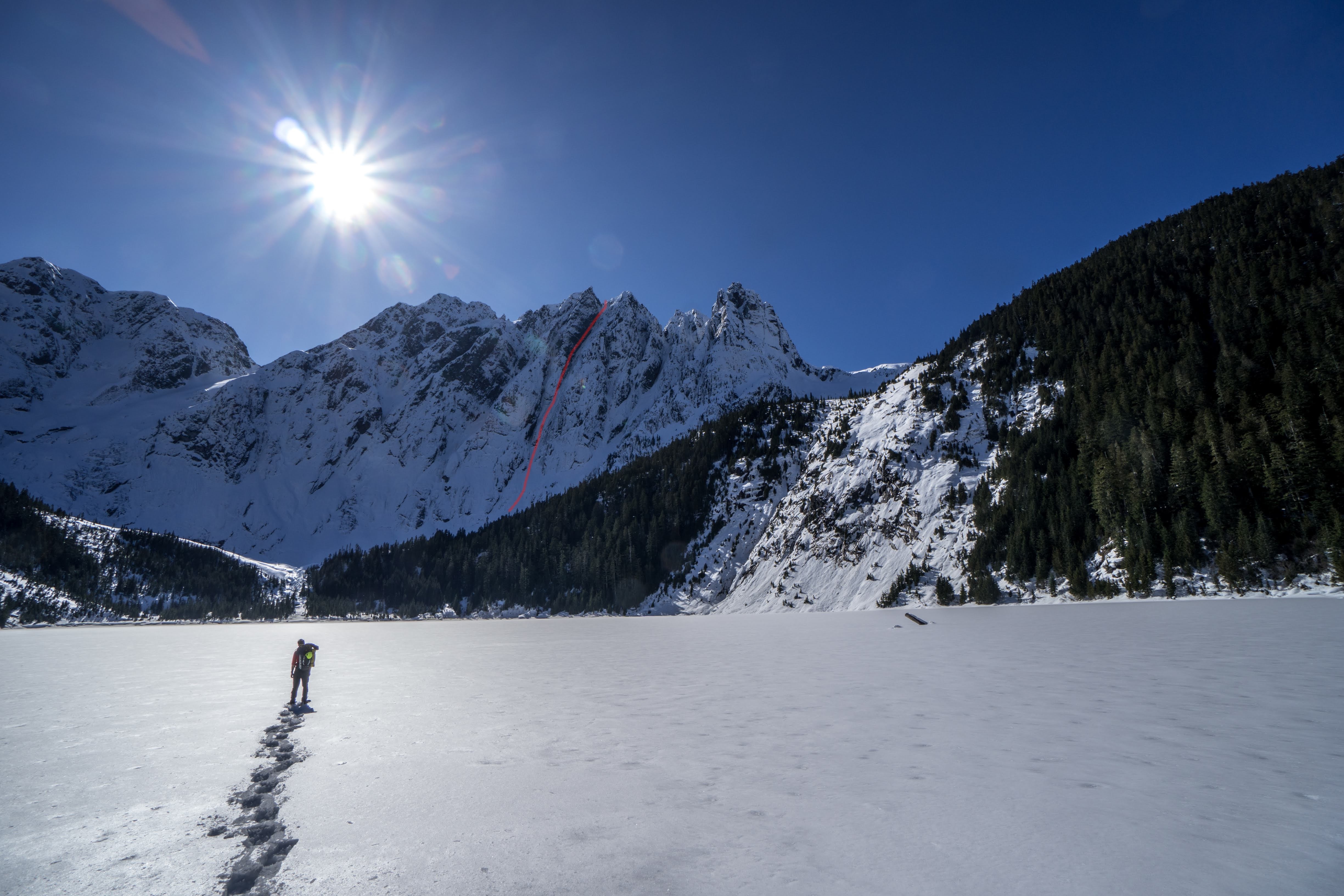 “Fuck!” I yell. We’re packing our gear in Liam’s living room in Nanimo and I’ve just broken the buckle off the rope strap on my pack. Cursing flimsy Black Diamond sewing, we jerry rig a rope strap for me out of Liam’s cordelette and turn in for the night. By noon the next day we are cursing the strenuous approach (its a pretty long walk) and the weight of our packs. Despite it being over nine hours since trying to go to sleep the night before, the sound of my alarm going off at 3am is a little harsh until I remember where I am and and a mix of excitement and nervousness washes over me. An hour later the tent is down and we are postholing across the lake towards the base of Diretissima, our route on the East face of Colonel Foster. The first few hundred meters are mostly moderate snow and ice so we rack up but keep the ropes away. So far the spindrift that turned us around earlier in the year is not to be found. Fingers Crossed. The snowfield terminates in a couple body lengths of steep snice at the base of the couloir that forms the bulk of our route. Liam suggests soloing it but I am not so confident. I start up anyways and it feels pretty reasonable so I commit. After Liam joins me at the top of the step, we cruise up some more steep snow and build a belay in a bulge of blue ice at the base of the first wi3 pitches. 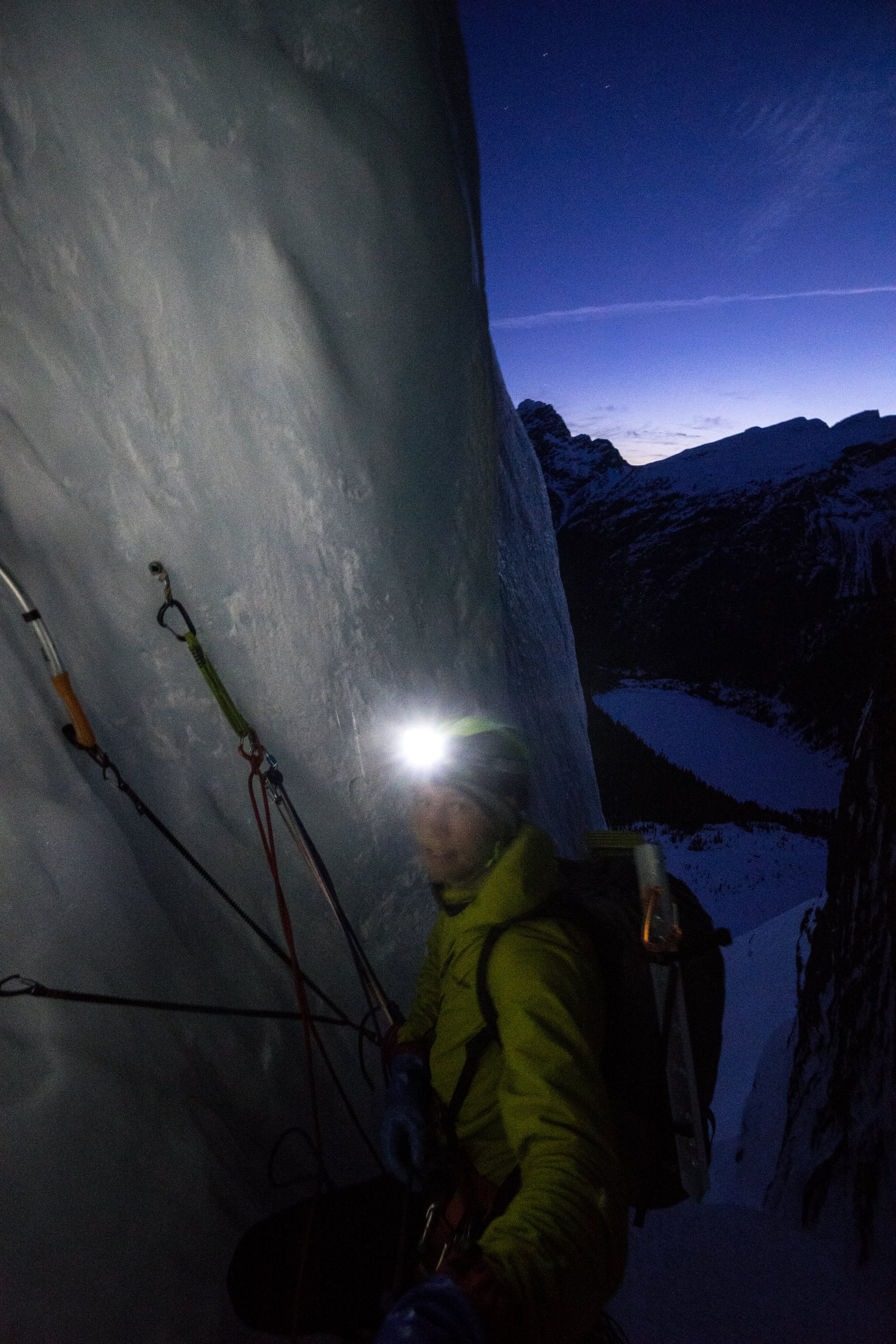 Probably our most bomber belay on route. Photo: Liam Gilchrist

After faffing with ropes, Liam takes the first lead. I tried to take a picture but my junky camera doesn’t work very well in the low light and the picture didn’t turn out. I take over and bring us to the point where we have the option of heading left into Supercouloir, a route that has been tried a few times without success but we decide to leave that adventure for another time. 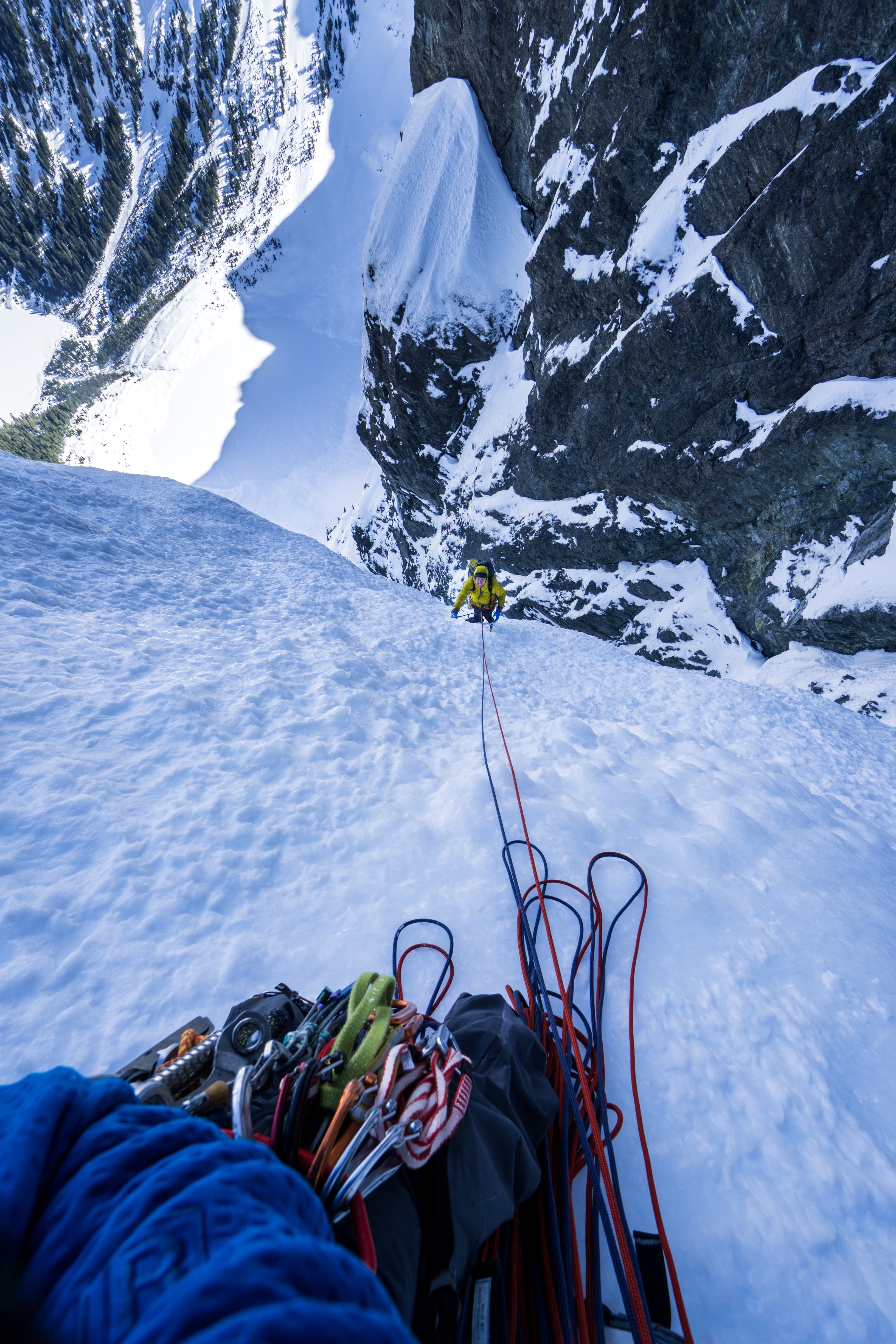 Two long simulclimbing blocks bring us close to the base of the next steep pitches, but I am disoriented by the scale of the route it and takes another full 60 meter pitch to get near the steep section. This section of the route does not contain much good ice and I folllow the pitch to find Liam belaying me off of a buried snow picket. Two more pitches bring us into easier terrain again and Liam remarks to me that wi3 isn’t so easy after over ten hours of climbing. We also concluded that it was probably too warm and that we got out of the tight lower couloir just fast enuogh. 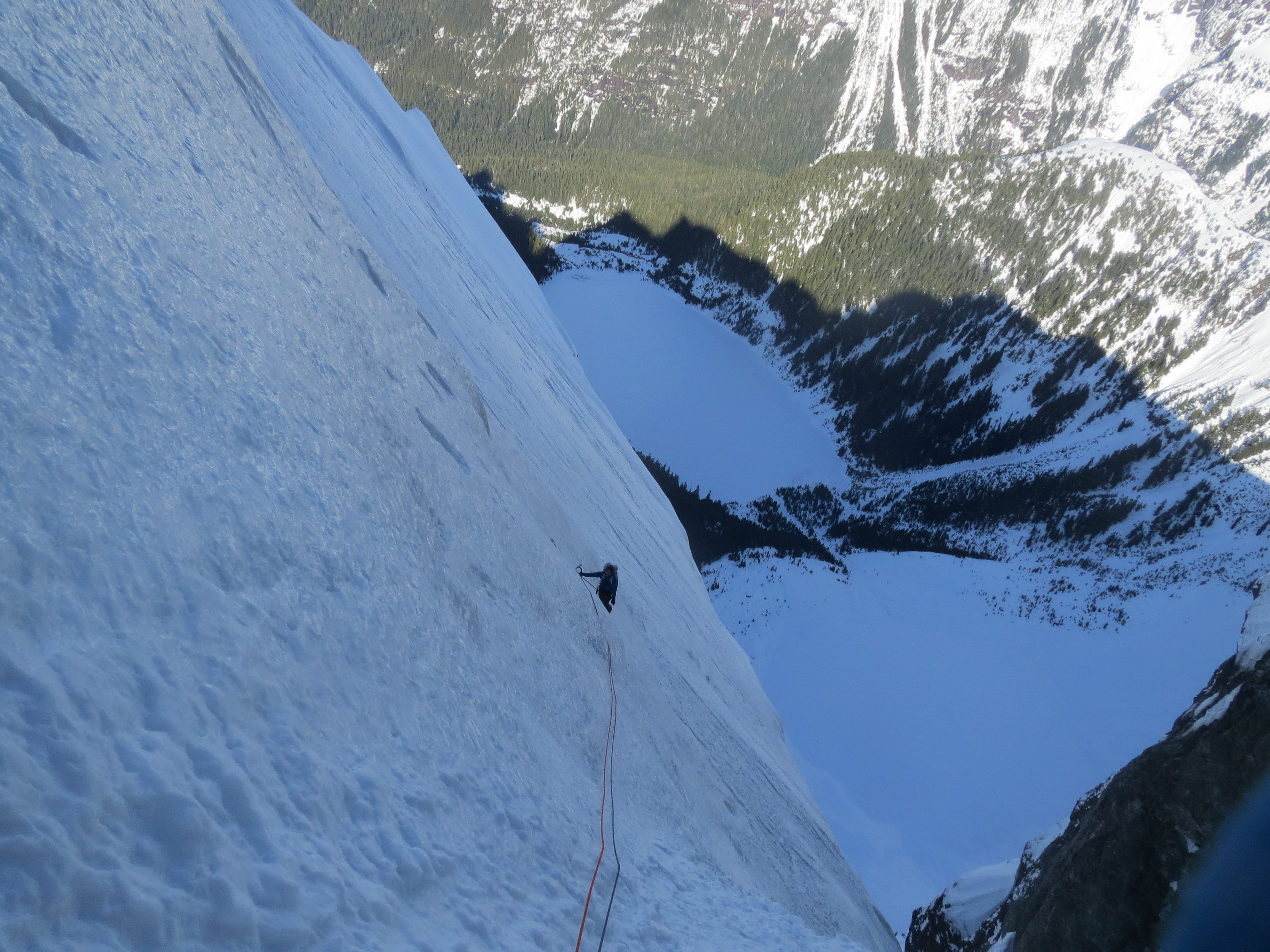 Another simul block and a few pitches brought us close enough to the top that we felt like we would pull over the edge at any moment but difficult sections still separated us from our goal. As the sun continues to drop towards the sea on the far side of the mountain, Liam leads a short step of steep, crumbling ice and snow. At the belay we rack over and I resolve to take us to the top in one long simul block. After a few ropelengths, I hesitate where the route leaves the gut of the couloir and goes straight up the snow flutings to our right. I can tell that the snow will be unprotectable and it is about 50 meters to the summit ridge. But it isn’t steep and I said I’d take us to the top so I bottom out an ice screw in the blob of shitty ice in the back of the fluting in front of me and start climbing. The snow starts off supportive but turns powdery about ten meters from the top. I switch my umbilicals from the handles of my ice tools to the heads and stab them into the snow. I spread my weight out into as much area as I can and start to balance, dig and swim my way upwards. Liam yells up “what’s going on up there?” as snow I excavate is channeled onto him by the shape of the snow fluting. I yell back “sorry, you’ll see when you get here” and keep climbing. Pulling over the summit ridge into the setting sun and bringing Liam up feels like a gigantic weight lifting off my shoulders. 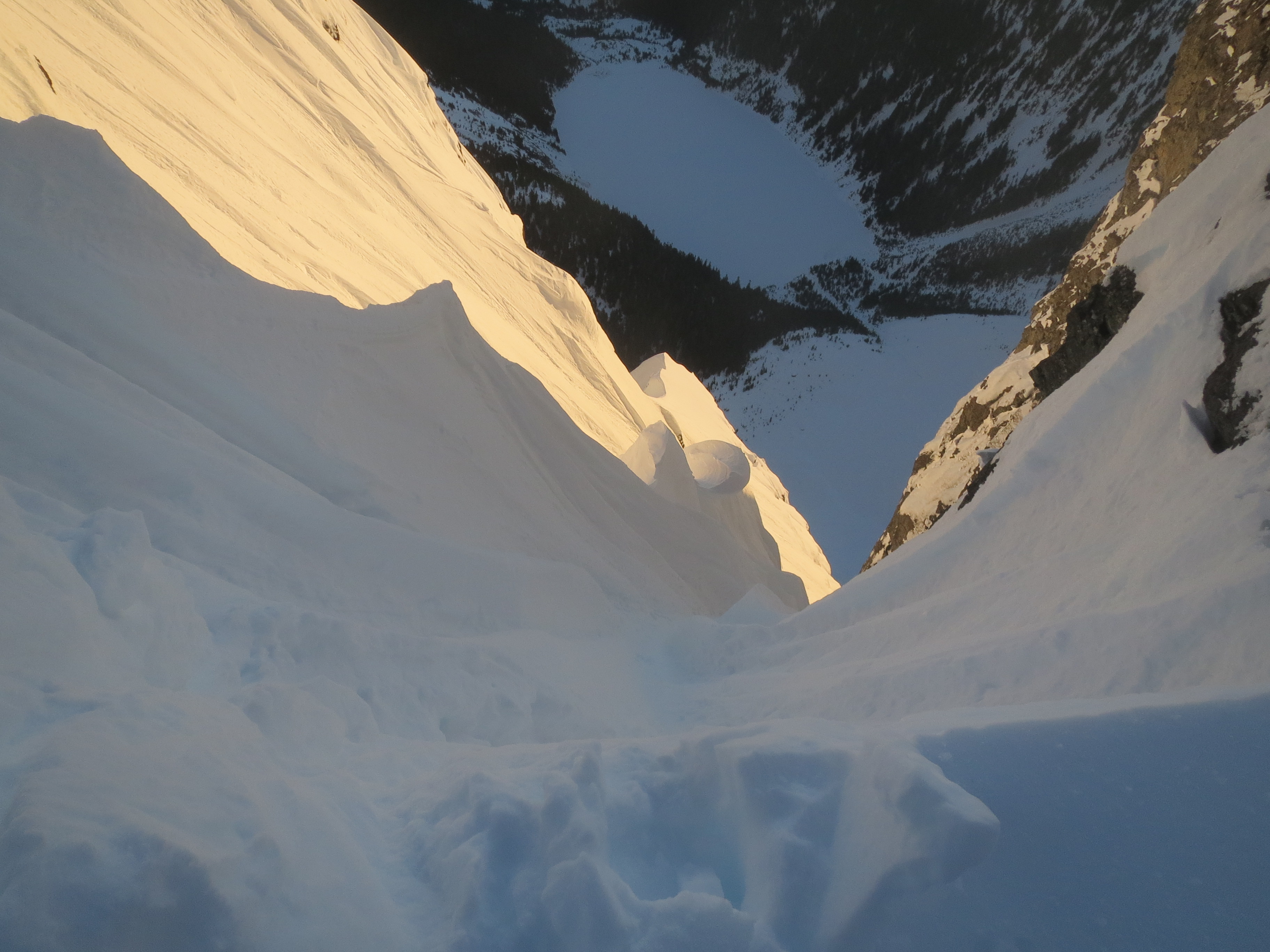 It was 7 pm, we were both pretty gassed and the sun was going down so we dug a ledge and set up our tent for the night. We got up sort of late the next morning and nervously started climbing along the ridge, anxious to get underway and get off the mountain.

We are pretty sure that Diretissima has been climbed four times before our ascent: the first ascent by Joe Bajan and Ross Nichol in 1978, by Rob Wood and John Kelson in 1989, by Joe Bajan and Steve Risse in 1989 and by Hunter Lee and Mike Shives in 2014. Joe Bajan and Ross Nichol descended by rappelling the West Face from the point where Diretissima tops out the East face. For this endeavor, they carried a drill up the route and installed roughly ten single-bolt anchors down the West face. We originally thought Joe Bajan and Steve Risse used the bolts again in 1989 but have since learned that they did not and we are not entirely sure how they descended. We are also not entirely sure how Rob Wood and John Kelson descended. We know that Hunter Lee and Mike Shives descended by traversing South along the summit ridge and downclimbing a gully on the West face, then hiking around the South summit to get back to the lake at the base of the East face. Variations to this option are the standard way off the peak in the summer but it prior to our ascent, Hunter had told Liam that he thought a section of the summit ridge that is climbed as a 5.6 slab in the summer could be problematic in bad snow conditions, so we were somewhat worried about our odds of success.

With only four pitons, three cams, half a set of nuts and little good ice to make V-Threads we didn’t really like our odds of successfully rappelling the West face so we intended to traverse the summit ridge. 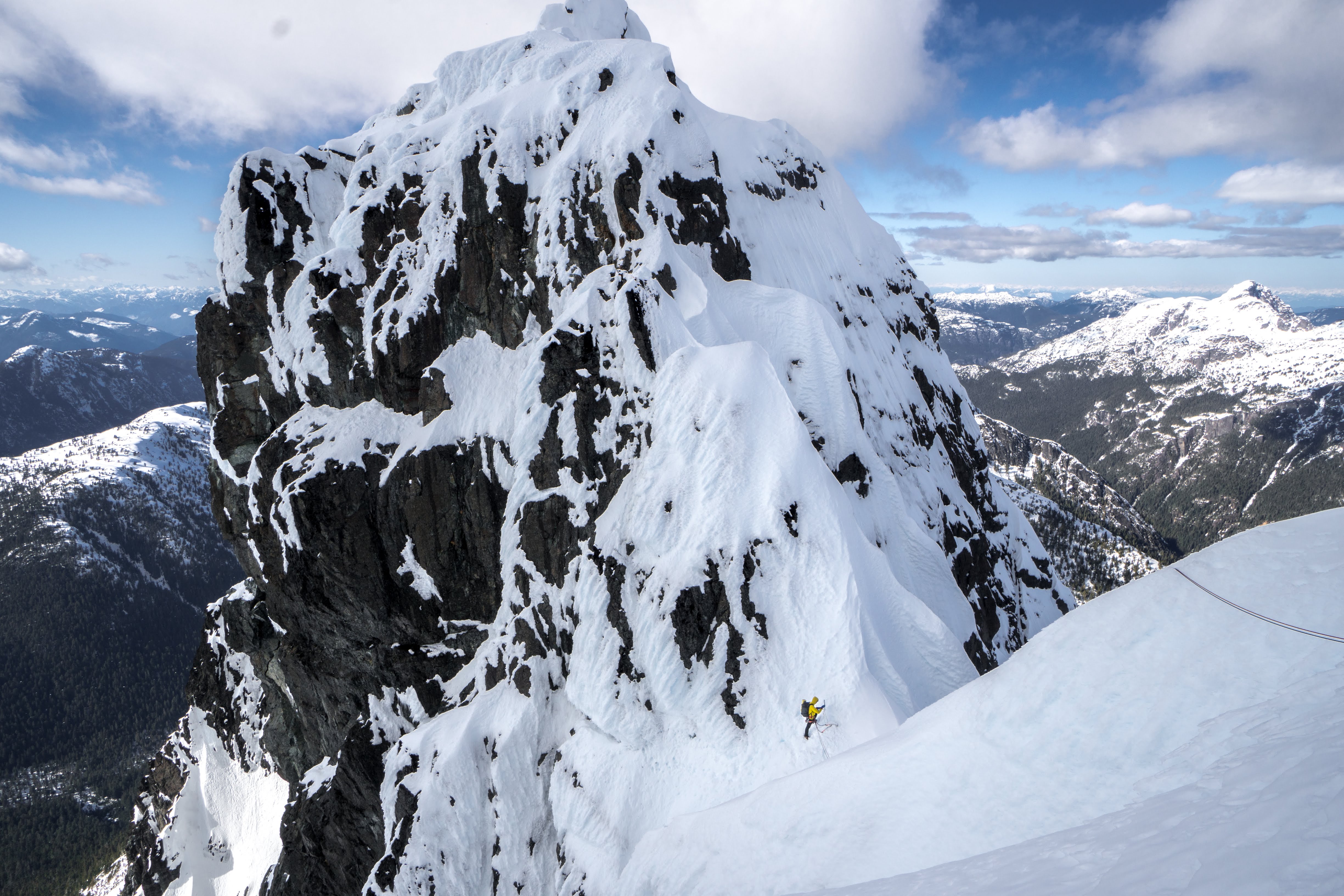 In this photo I’m standing at the bottom of the slab pitch (its 5.6 in the summer) that Hunter thought could be problematic in bad snow conditions. Photo: Liam Gilchrist

After I wasted an hour in a squeeze chimney full of snow trying to force my way up a direct line to the summit we found an easier way and I belayed Liam from below while he tagged the summit. Cursing my error we decided we needed to get going, put the ropes away and started following a narrow sloping ledge south. Even though my crampons have anti-balling plates I had to stop frequently to clear them of the wet, sticky sun-warmed snow. Liam on the knife edge

Two rappels and some crumbly snow climbing led mostly by Liam brought us to the base of the slab that we were worried about and we were very relieved to find it in good condition. After a few pitches of nerve-wracking snow climbing on the knife edge ridge we reach the col at top of the descent gully and I excavate a boulder from the snow to rappel off of. As we put the ropes away for the last time we were acutely aware of how late in the day it was. Nothing for it, we started down the gully and reached the base fairly quickly, took our harnesses off and started our long walk home. Me feeling pretty stoked to put the ropes away. Photo: Liam Gilchrist

Sun exposure had turned the snow at the base of the West face into total mush and we sank up to our thighs at times as we postholed around the South summit. We reached the col above the lake as the sun went down so we got our headlamps out and started picking our way down to the lake in the dying light. We finished the soul-destroying breakable crust posthole back to our cache (snowshoes and Liam’s approach pack) at 9 pm and promptly flopped down to take our harnesses off and pick through the remnants of our food. We had planned on a three day trip and I really didn’t want to spend another night shivering in my soaked sleeping bag so I pushed to walk out that night but Liam wanted to camp. I relented at 11 pm once we had crossed landslide lake and descended to the last creek crossing as I began realize how heinous it would actually be to continue through the denser bush in the dark. In the morning we shared a clif bar and walked out. When we got to the road we piled into Liam’s car and drove to Campbell River in search of fast-food.

On the ferry home I pondered our choices to embark on such a strenuous trip under COVID-19 and concluded that I was fine with our decision but that a lot of people certainly wouldn’t agree.

4 Responses to Colonel Foster in Winter