This trip report is ancient history, from early-September 2018. I wrote it but for some reason never posted it anywhere. The trip report feed has been pretty quiet lately for obvious reasons, so here’s some light reading of a coupl’a Jerry’s doing some rockclimbing, to get you through these dark days. Stay healthy stay stoked.

The Bugaboos are a fickle place. It had been on my to-do list for a long long time – and so finally, in the first week of September after I graduated from all this university nonsense, Justin Krawetz and I were due to head out there and climb some stellar alpine granite in the sunshine. Unfortunately, meteorological cycles didn’t give a damn about my plans – as we approached our departure date, the Bugaboos were forecasted 55cm of snow and 80km/h winds. A change of plans was in order, so we set our sights on some steep walls in Valhalla Provincial Park. I contemplated our potential objectives and stoke grew over the course of the long drive out to pick up Justin in Princeton, BC. Upon arrival in the small mining town, some new information was brought to our attention; the Valhalla Provincial Park trailhead was, in fact, literally on fire. I would consider these conditions equally undesirable to those of the Bugaboos. Some more trip planning was in order. After a couple hours of not-so-careful consideration, ‘somewhere in the Rockies’ is what we settled on – the rest of our research and trip planning was to be done on mobile devices in the car over the course of the subsequent 7 hour drive to Canmore, AB.

Upon determining that this would no longer be a serious backcountry trip, we proceeded to do our trip grocery shopping at the Costco in Kelowna, and pack my car to the brim with bulk quantities of muffins, veggie straws, and fruit juices. Prime fuel for the modern alpinist.

We arrived in Canmore around 11pm with no plans of where to stay, so we drove a short distance out of town toward Ha-Ling peak in preparation for a climb the next day. En route, another wrench was thrown into our plans, as we passed numerous construction notices informing us that the entire mountain was closed off due to road construction and rock-scaling. Again defeated, we both passed out in the front seats of the car at a roadside pullout, deferring our decision making process until the next morning

So, the following day, instead of sending gnar up the face of Ha-Ling, we faffed around and did some touristing around Lake Louise, which was rewarding nonetheless, and the day was topped off with some steep sport climbing at the back end of the lake. That evening, we considered our camping options; having no desire to pay $3 million for a campsite, we instead opted for a Rockies dirtbag climber’s rite of passage – spending the night sleeping in the car in the Save-on-Foods parking lot. It turns out Justin forgot our tent poles anyway.

The next day we hiked up to Mt Yamnuska to climb the Kahl Wall (10b), a moderate and desirably exposed route up the centre of the limestone face. This being our first time to the Rockies, we were unfamiliar with the quality of rock and quickly realized it’s dissimilarities with the granite of Squamish, primarily due to it’s propensity to fall apart in your hand when you apply any weight to it. Interesting. I particularly enjoyed arriving at Justin’s belay at the top of pitch 6 and hand-removing a block on which a cam in his 4-piece anchor rested. Overall the route was rad, steep, and thoroughly enjoyable, but nevertheless we went on to climb 5.7 to 5.9 for the remainder of the trip, because we’re lazy and loose rock is sp00ky. 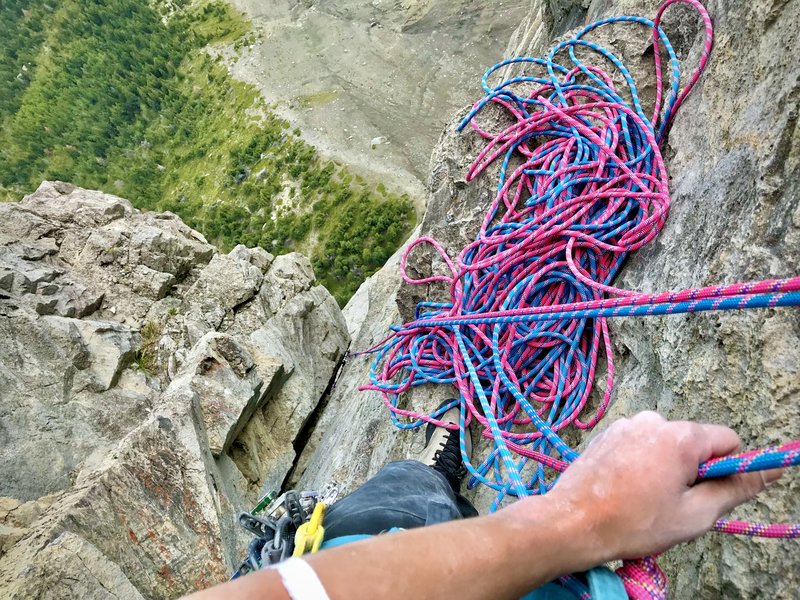 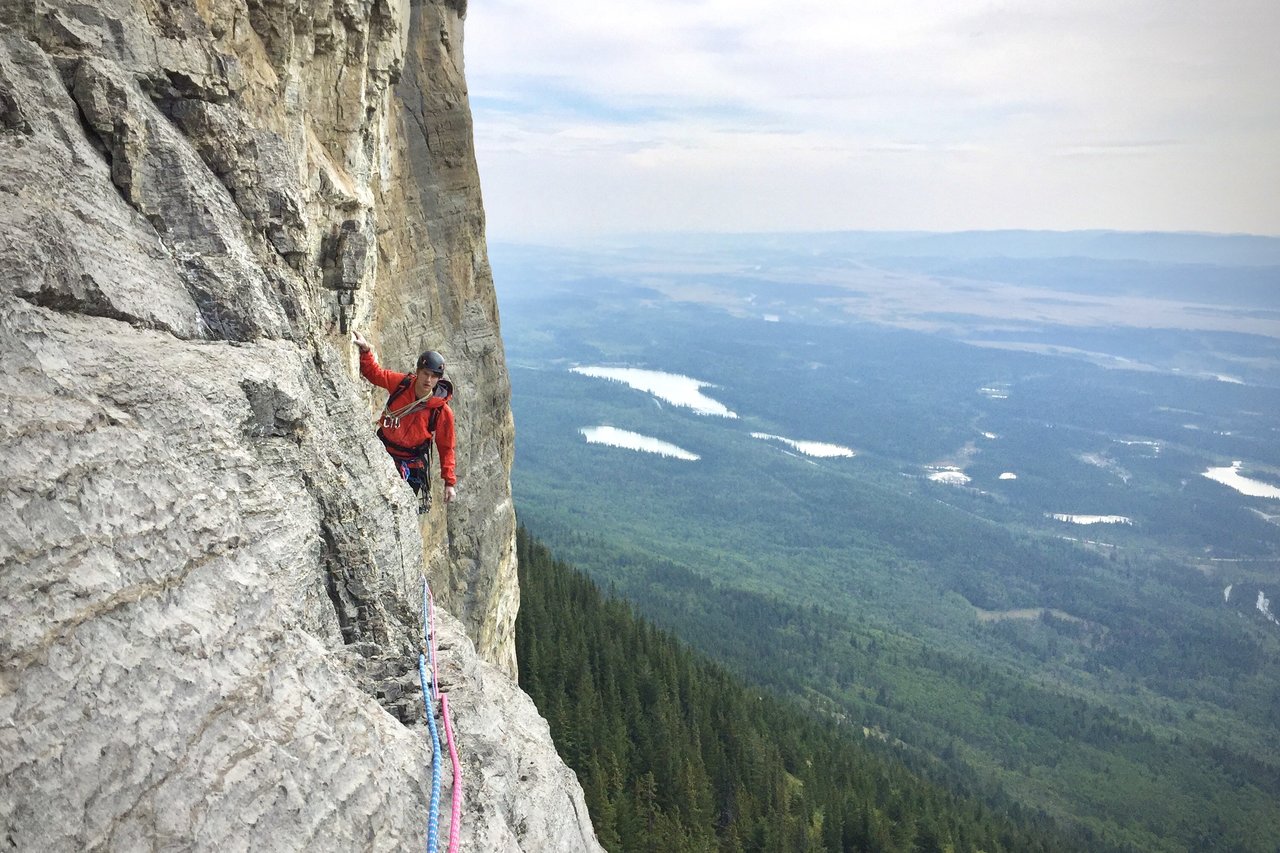 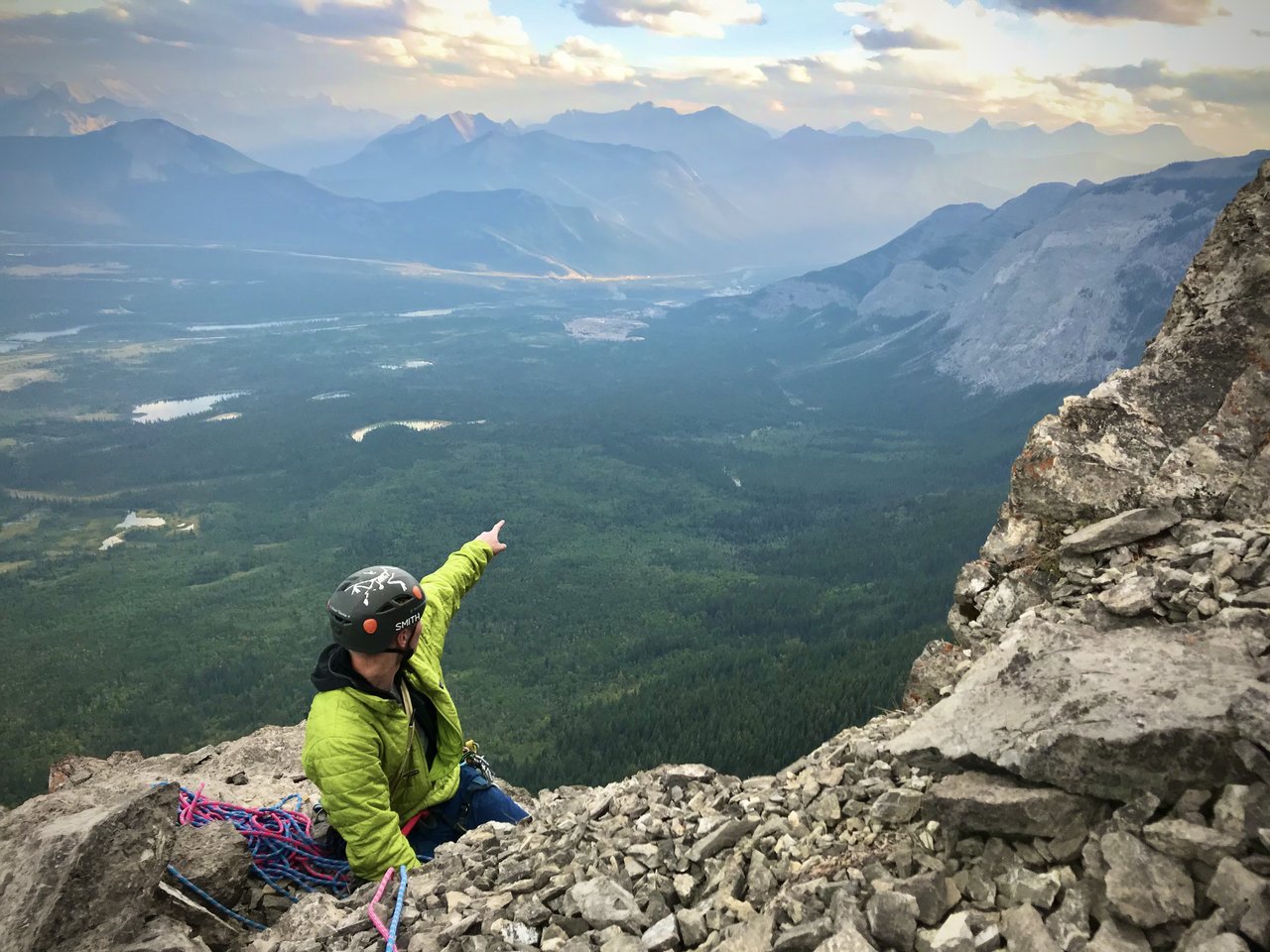 Justin pointing to where he forgot our tent poles

And on the third day we climbed the choose-your-own-adventure South Face of Eisenhower Tower. And it was good. Mostly scrambling 4th class to low 5th, pitching up to 5.7 terrain in the upper reaches – an excellent day covering a lot of ground. 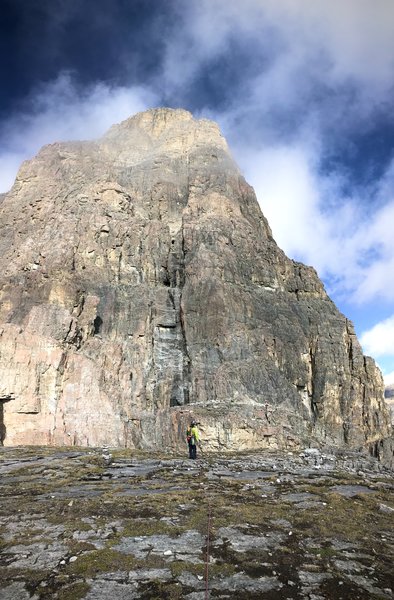 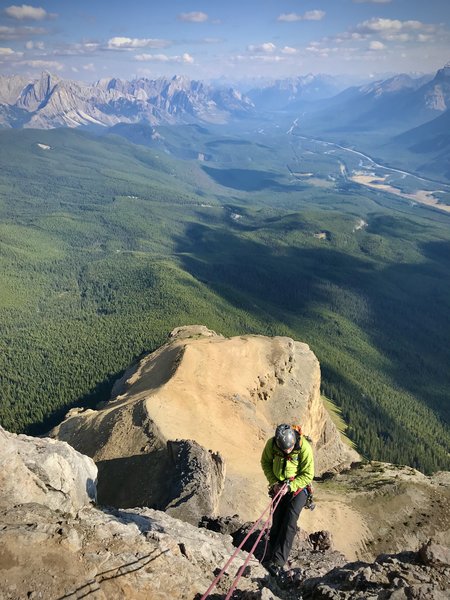 For the following day, we decided that we would wake up at 5am so that we could beat the tourists and get a parking space at Moraine Lake to climb the Grand Sentinel. This did not happen. My alarm went off at 5am and I stumbled out the car; it was like, -10 °C which is way cold, so I curled back up in the front seat of the car and remained in that state until 10am. Now staying at an overpriced campground, we took advantage of our failure to launch that morning and instead cooked and enjoyed a good breakfast. After packing up, throwing together our gear, driving over to an overflow lot and taking the shuttle bus, it was 1pm before we arrived at Moraine Lake. This was a classic example of the Modified Alpine Start. We ran up the Sentinel Pass trail in good time, and were racking up at the base of the quartzite spire’s South face in under 2 hours. From the mid-afternoon onward, the route is generally shaded by a ridge to the southwest, but serendipitously we caught the perfect hour long window between 3:30p-4:30p as the sun passed between the towers on adjacent the ridgeline. With a temperature differential of over 10 degrees between the shade and sunlight, we were highly appreciative to be blessed with the extra vitamin-D. 4 pitches of fun climbing up the Sentinel’s south face led us to the top of the rad and unlikely feature, just as the sun dipped below the ridgeline and the Pass was again shrouded in darkness. We rappelled, made remarks of features phallic nature, and ran back down to the car, just in time to catch the sunset at Moraine Lake. A good day was had by all. 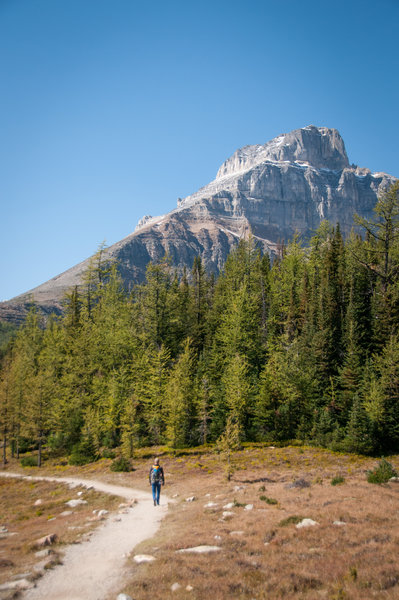 The tourists walk to Sentinel Pass. Because we are tourists 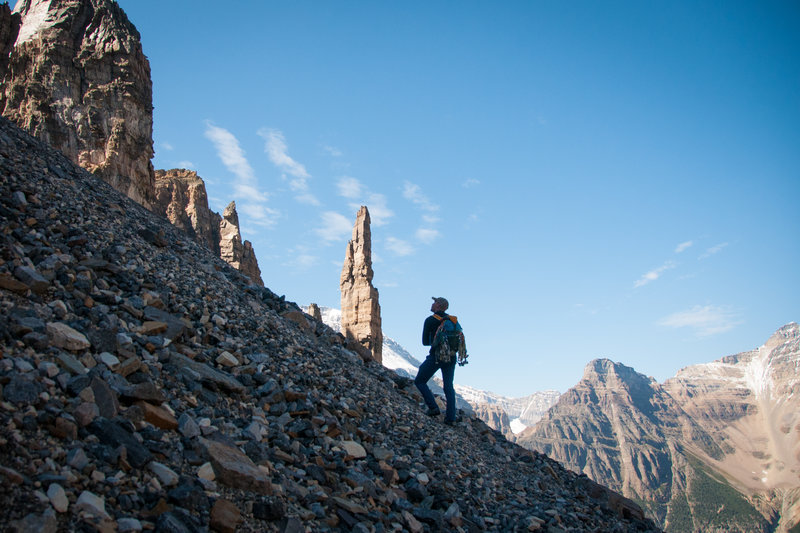 Justin looks around at things 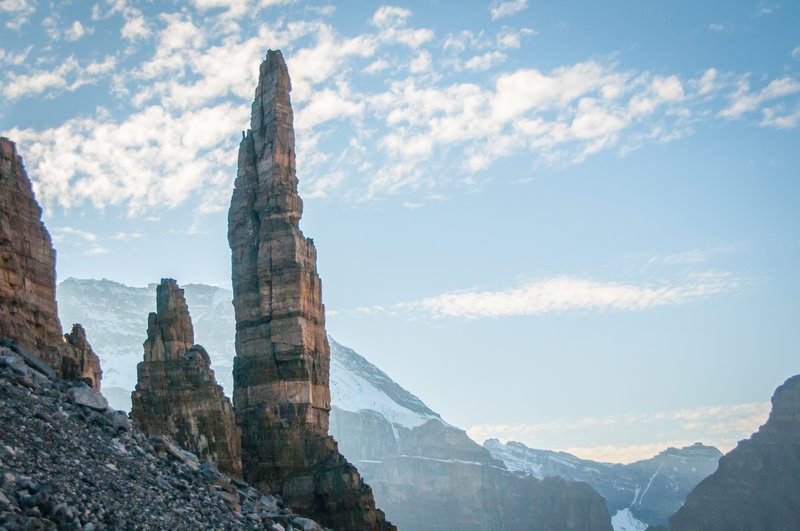 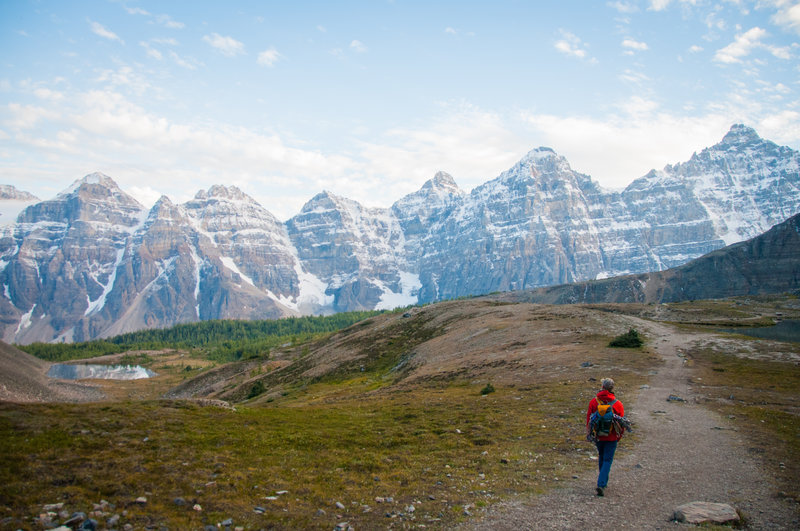 Justin continues to look around at things

The next morning, we returned to Moraine Lake to climb the McKay route up the Tower of Babel. This time we actually arrived at 5am, but then slept in the car until 11am. Early morning initiative was nowhere to be found, but the Modified Alpine Start was alive and well. Nevertheless, we embarked around midday and climbed 7 pitches of highly enjoyable 5.8 terrain, with occasional vistas of azure spilling around the corner from the lake below. To top it off, we got to spend our last night of the trip once again sleeping in the car at the Canmore Save-on-Foods. Yay! 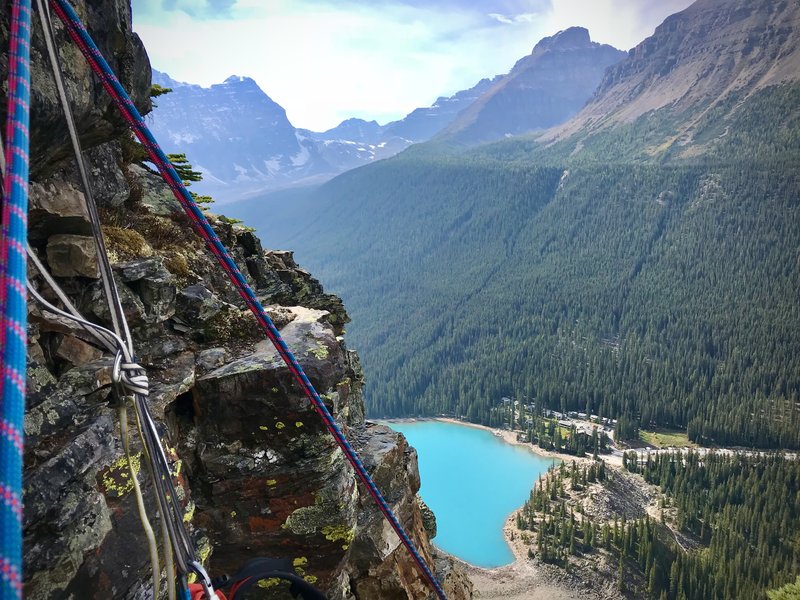 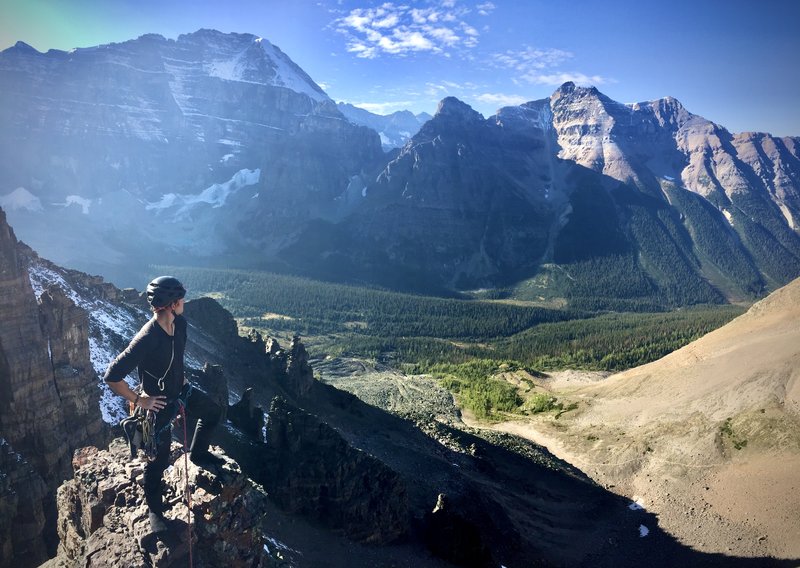 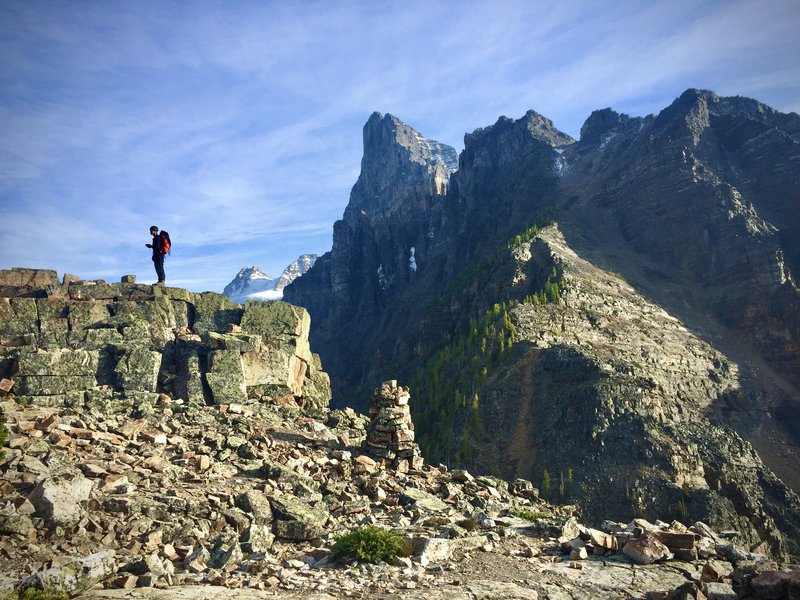 Looking up directions to Save-On

On the final day, we hopped some fences and went for a little scramble to reach the base of our final objective for the trip; Escargot Corner, high on Mt Norquay. Simul-climbing, stems, smears and liebacks – a stellar alpine route with a little bit of everything. 12/10 would recommend. True to it’s alpine locale, heavy winds whipped and tangled our twin ropes around as we climbed 8 pitches of cruiser 5.7. Good gear and the wild position made for an excellent end to the trip. 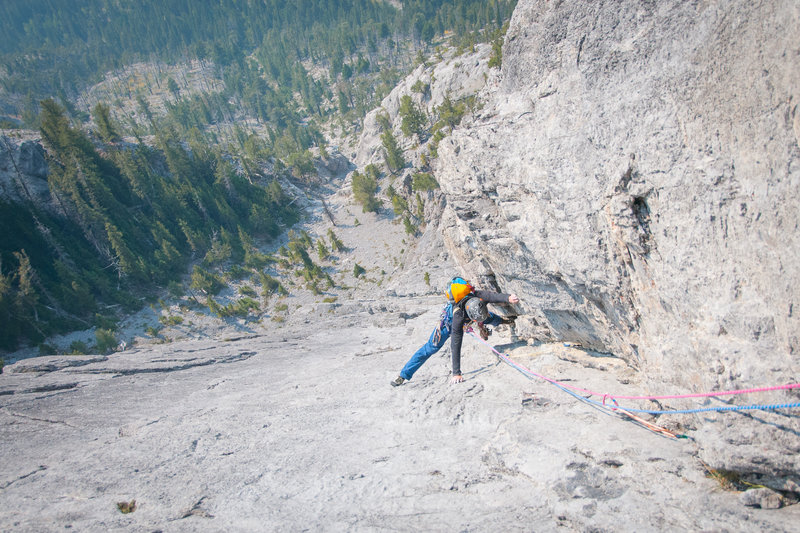 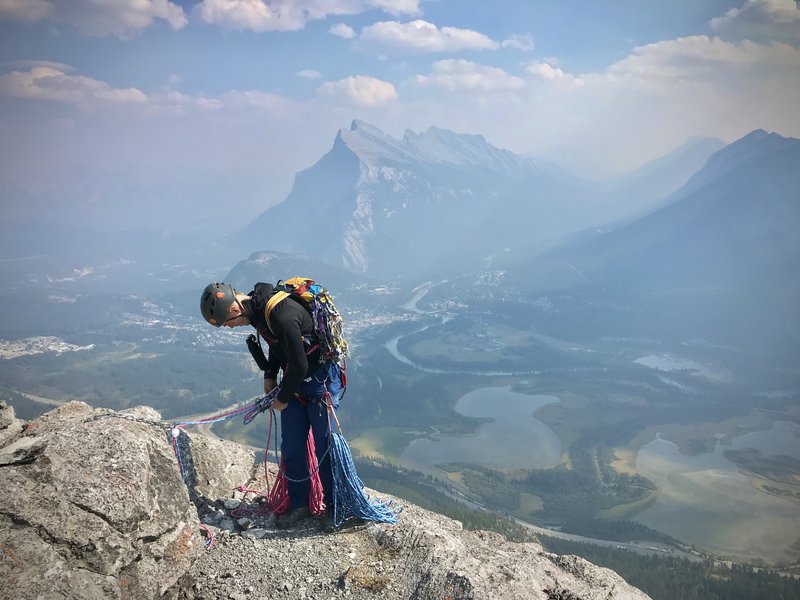 On the drive back west, we remarked at how rad, successful and productive our last-minute trip to the Rockies had turned out to be, despite the changes of plans (or lack thereof) and our own laziness. Next time, I look forward to showing up in the Rockies with a real plan, tent poles, and perhaps even a greater inclination to spend a few nights away from the Save-On parking lot. I’d also like to avoid another $200 speeding ticket. 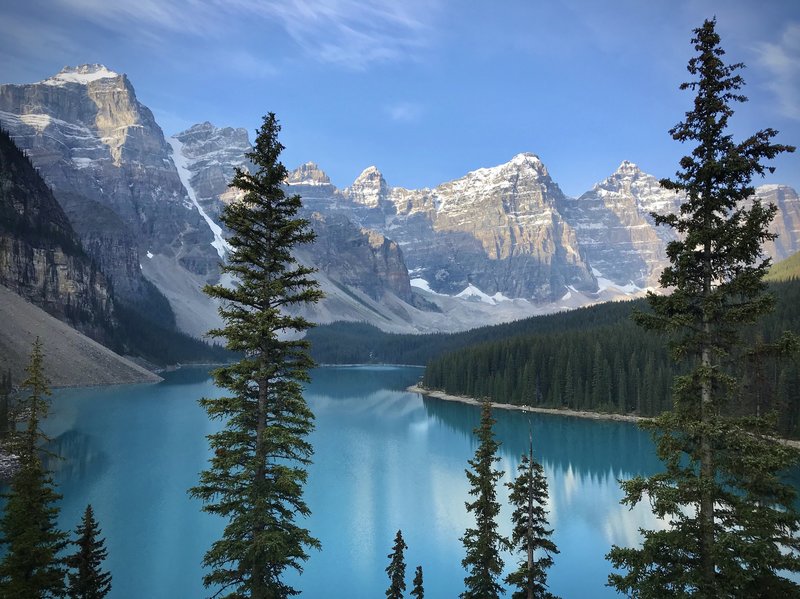