Me-”My car is much happier  without the hobo mattresses inside” Alana: “That’s a quote of the day…”

In late April a couple friends and I went for a drizzly day paddle up Fraser river. Generally not top destination for either of us, but it is the closest body of water as Alana and her husband Matt live in New West and I reside in Port Coquitlam, but we had limited time and the murky waters would have to do.

After working our way upstream for a few kms we came upon an island that looked like it had something of a beach. Even from far, or for that matter from mobile Google Earth we saw the mess ashore.  As we landed and made our way over the gooey slippery low tide muck, it only got worse. In front and all around us were abandoned remains of a large squatter camp that had approximately 5 tent sites, a communal area and their own garbage dump with random garbage strewn about. We left shortly after, with mixed feelings of disgust and incomprehension. Later that night I had an idea. “It would be a nice little island if someone managed to get it cleaned up”. I thought of who and how and the massive mess that it was. I contacted the organization Fraser Riverkeeper who has been involved in other clean up events I have participated in. They got back to me promptly that they would look into what they can do, and in the meantime I made another trip to survey and roughly quantify the mess. My estimate was that it would take about 6 labor hours to sort and bag the junk and 12-16 canoe loads to ferry it over. The task at hand looked overwhelming but just maybe doable, not unlike some mountains I have been up over the years. 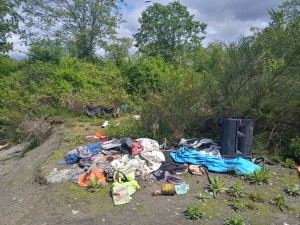 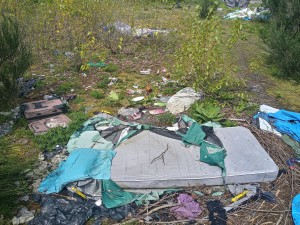 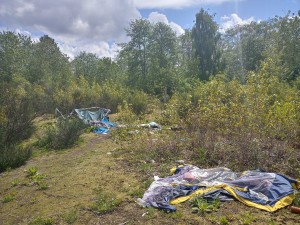 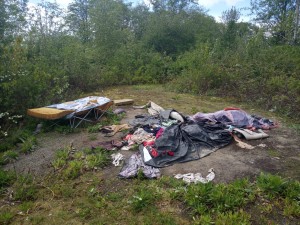 I relayed the news to Fraser Riverkeeper who told me they unfortunately are unable to organize a clean up effort and suggested I contact RAPP-Report All Poachers and Polluters. Which I did, albeit with little faith. Next step was a post on West Coast Paddler, a local paddling forum which I used to frequent. The idea was received enthusiastically by Mick Allen who suggested he has a friend with a power boat who may be able to help and if nothing else we should chip away at it over a period of time. I am generally not the type to step back and let someone else do it so I thought of a way I could contribute. As an avid sea kayaker, canoes are generally not my thing but the job called for a canoe as access between log booms was too narrow for a powerboat and shuttling the stuff by kayak would take years. After a few false starts I ended up with a Sportspal 12 from FB Marketplace. It is a boat comically short and wide but also super lightweight.  Next day after work I put into water at Don Roberts park and hoped that my $120 canoe of unknown but very fine vintage will be sufficiently watertight. I took over from Mick who spent a few hours helping sort out the mess and was fairly certain it would turn into a long term project. 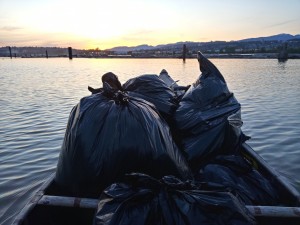 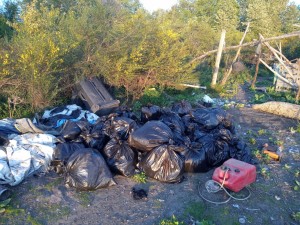 That first evening I spent a couple hours bagging the garbage, of which there were many locations and layers within layers- I actually found a perfectly good fuel tank for an outboard engine buried under layers of half rotten blankets ,sweaters and boots. Two trips at the end of the session showed that the little canoe can actually carry an impressive amount of junk for it’s 11.5 ft length, and the place was already looking much better with some land area cleared.

Next session was on Saturday morning and Alana joined me in sorting and bagging. Also we discovered that the island is home to many little garter snakes which were quite friendly,in part because it was early morning and they haven’t warmed up yet. With vast majority of the stuff bagged and tent sites cleared, we made two more runs and felt pretty good about progress. Afterwards the mattresses were deposited into my car to be taken to my work dumpster. Needless to say, my little hatchback did not smell like roses. 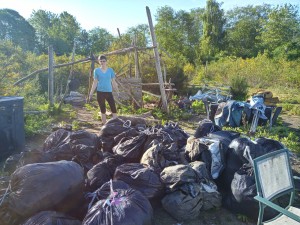 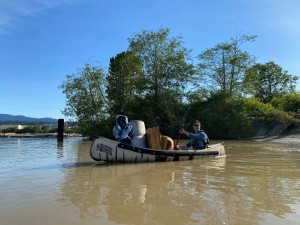 Wanting to capitalize on the good weather and favorable tides, I was keen on a big push on Sunday to get most of it over with. With something like 40 bags of garbage plus much random junk ready to be ferried, I asked around for help from anyone with a vehicle larger than my Micra. I got an offer from a friend and from a couple of paddlers from the forum named Doug and Lila who had a pickup with a canopy and were keen to help out. With an early start, by 9 AM I managed to make the short crossing 5 times and on the 6th was greeted by Dough and Lila who helped unload my boat before the last run of the day. Mick also joined the effort on the island and we dismantled the log structure that the bums put up and what garbage was left became one fairly tidy pile of loose items with all the bagged stuff gone. After the 7th run the truck was full to the top and river current started gaining speed slowly again.It felt like a good time to call it a day. Doug and Lila volunteered to take it all to the transfer station for which I am eternally grateful and so is my car. 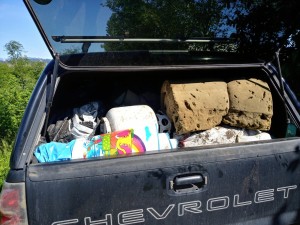 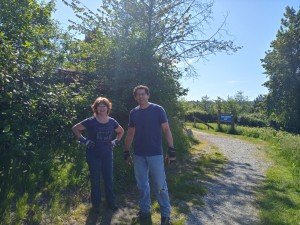 It was a fun team effort that felt no less rewarding than any of the peaks I’ve climbed, perhaps more so. The short crossing and the fact it was practically in my backyard definitely helped. As turned out, once started it’s a job that went a lot quicker than anybody anticipated. Sometimes all it takes is a few paddlers and a little canoe. 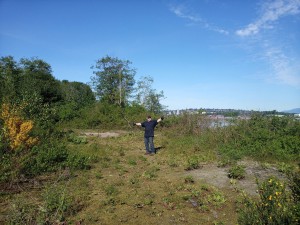 P.S. Partway through this I heard back from RAPP. They told me to contact the city. As the island straddles the border between Surrey and Coquitlam, I decided to just carry on with what we started for the very real concern that I would die of old age before they do something productive.

7 Responses to Paddlers vs Squatters- A Garbage Wars Story.