Mt. Archibald and the Deadly Poison False Cilantro, May 15, 2020

My son, Devlin, and I hastily decided to do Cheam—-we hadn’t been before, and since I had a day off and Devlin had a pro-D day, we had a good chance of not seeing anyone, and even if we did it’d be a piece of cake to stay many metres away. Cheam is also a good destination for Covid times because you can get there and back on half a tank of gas and thus not have to get out of the car where people exist.

With school not being in person, Devlin has gotten used to going to bed and getting up late, so I wasn’t under any illusion about getting even a vaguely early start. I’d also been preoccupied with Coconut, the heftier of our two guinea pigs. She’d developed some sort of heinous infection and had blood in her pee. The week before, I’d taken her to the vet and got liquid medicine that I had to squirt into her mouth with a little syringe, twice a day for twenty days. Although it had gotten rid of all the symptoms of the infection, Coconut wasn’t eating properly, was nervously gnawing everything in a way she doesn’t normally, and was showing signs of digestive turmoil.

I tried to get Devlin up at 8:00 AM, and he told me that he had a terrible night and hadn’t slept a wink, so he wanted another hour.

I fretted over Coconut for a while, forced her to drink another round of her meds, and decided to book another appointment with the vet and got one for 9:00 the next morning. After that was done, my wife, Iva, was up. She claimed that she’d found a cilantro plant growing in the back yard and had brought it in. I disputed that it was cilantro, and she got me to taste it. It was pretty awful—-I told her it was definitely deadly poison false cilantro—-but for some dumb reason I swallowed it. 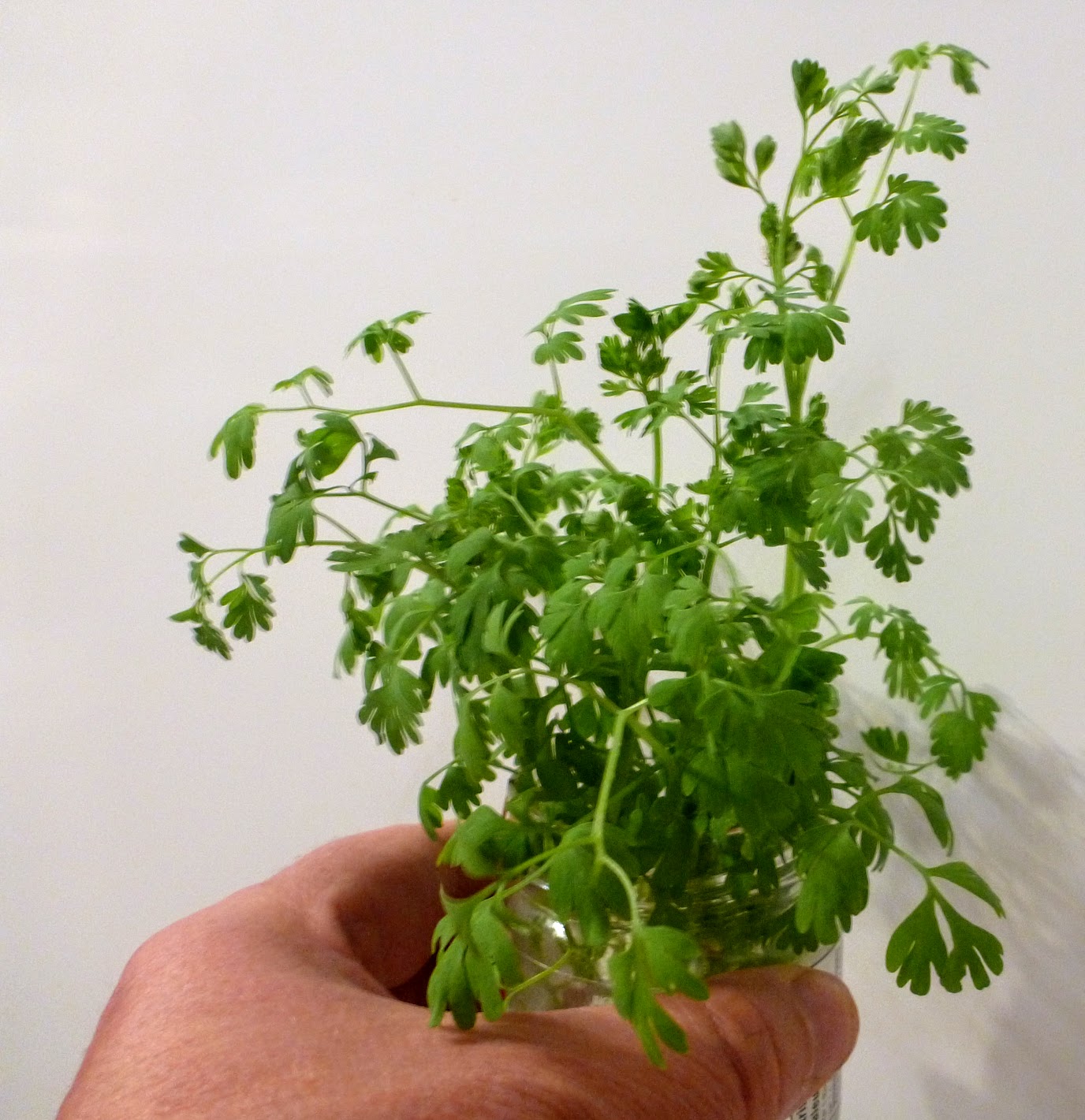 I lay down for a bit, waiting for Devlin’s hour to be up, and then nodded off myself. When I woke up Devlin was willing to get moving too, and we were getting out the door just after 11:00. Gadzooks.

As I was trying to leave, Iva got all agitated because she’d found pictures of poison hemlock that looked similar to the deadly poison false cilantro. Poison hemlock has no antidote and can kill in small quantities. Apparently symptoms appear thirty minutes to a few hours after ingestion and include burning in the digestive tract. I really didn’t have much, and poison plants are well described on the internet, but useless plants are not, so I figured it was probably just a useless plant and went on my way. I regretted insisting that it was deadly poison false cilantro.

Before I got out of Vancouver my tongue started tingling, and my esophagus started burning to some degree, but not a huge amount. For the first time I believed that I might have actually been poisoned for real and sort of regretted that I didn’t take a look at the picture of the poison hemlock to decide if it really looked like the deadly poison false cilantro, or if it was just Iva’s catastrophizing that caused her to misidentify. I wasn’t particularly concerned, though.

By the time we got to Chilliwack, I was still feeling it, but definitely less than before, so I decided I definitely didn’t care what kind of poison plant it was because I wasn’t that poisoned.

We got most of the way up the logging road to Cheam and stopped in the snow. I hadn’t bothered to get any sort of navigation info, because there was always a more immediate concern. Cloud was fairly low when we arrived, and I had a slight tinge of regret. As we skinned up the logging road, Devlin was going on about Minecraft stuff and was giving me grief for not packing an Ender Pearl, which apparently transports you to wherever you throw the Ender Pearl. He pointed out that an we could throw the Ender Pearl to the car when we were hooped. 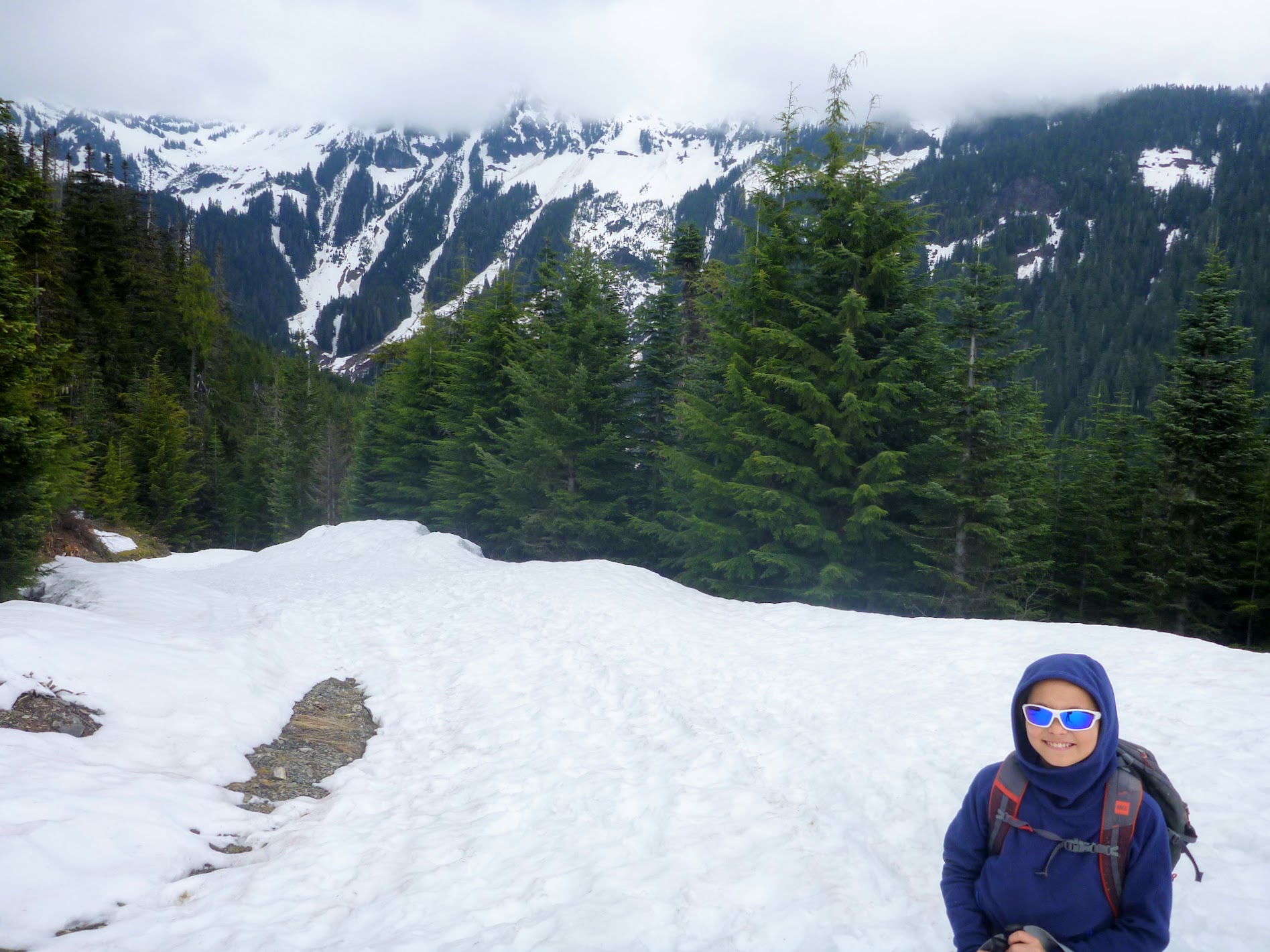 Lots of discussion of Ender Pearls

“Why would we want something like that. It’s not as if we ever end up in the middle of some terrible bushwhack in the dark.”

That got me a serious eye roll, which entertained me. My being entertained did not entertain Devlin.

Devlin decided that he was tired and lazy fairly early on, so we decided to head up to the Cheam ridge but head west from there to get to Mt. Archibald. It was a bit shorter and a bit closer, and was just below the clouds, instead of being in them.

We got a couple good views of Chilliwack between the clouds, but they were fleeting enough I never got the camera out in time. Devlin decided that Mt. Archibald sucked. We summitted easily enough; non-technical skinning, except the last couple metres needed skis off and a couple trivial coniferous moves. 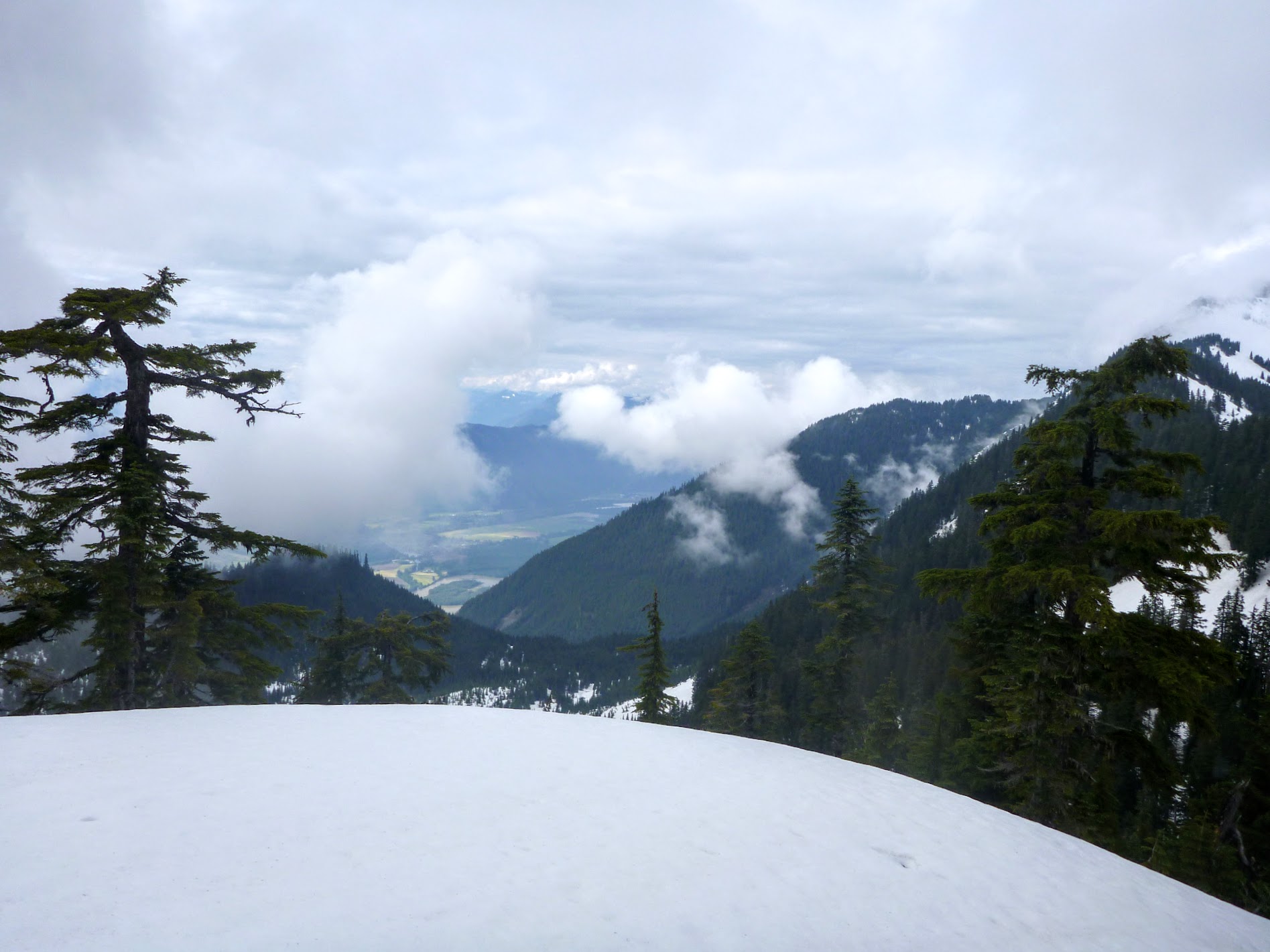 The best sort-of photo of Chiliwack I got. 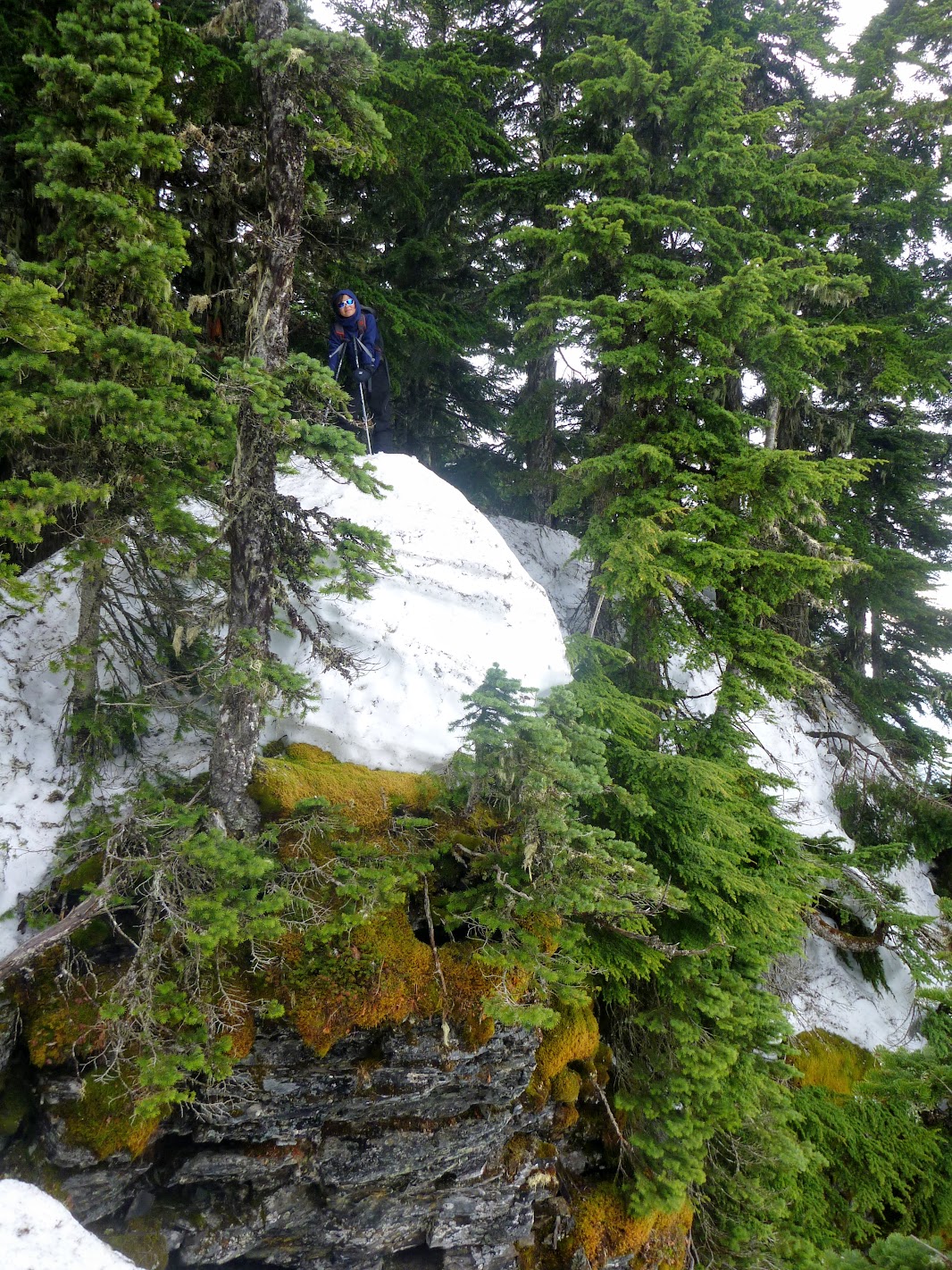 Because I was supposed to make supper, and it was a really late start, I wanted to ski down in a hurry. I could see the valley with logging roads to left—-we’d ski down that way and connect up with the logging road. In retrospect I probably should have at least looked at compass or the GPS, but in the name of efficiency, I didn’t. 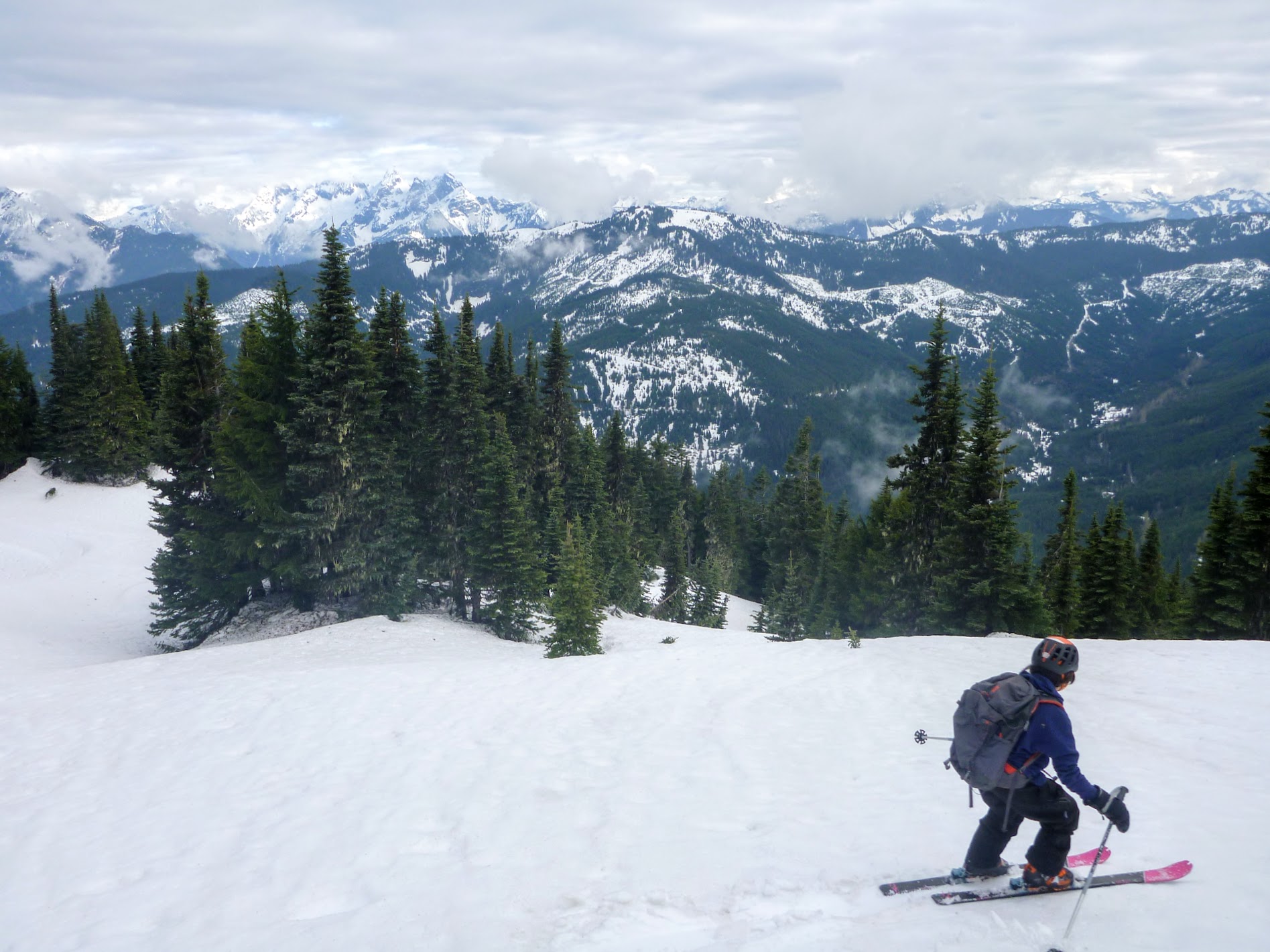 Starting to head down. 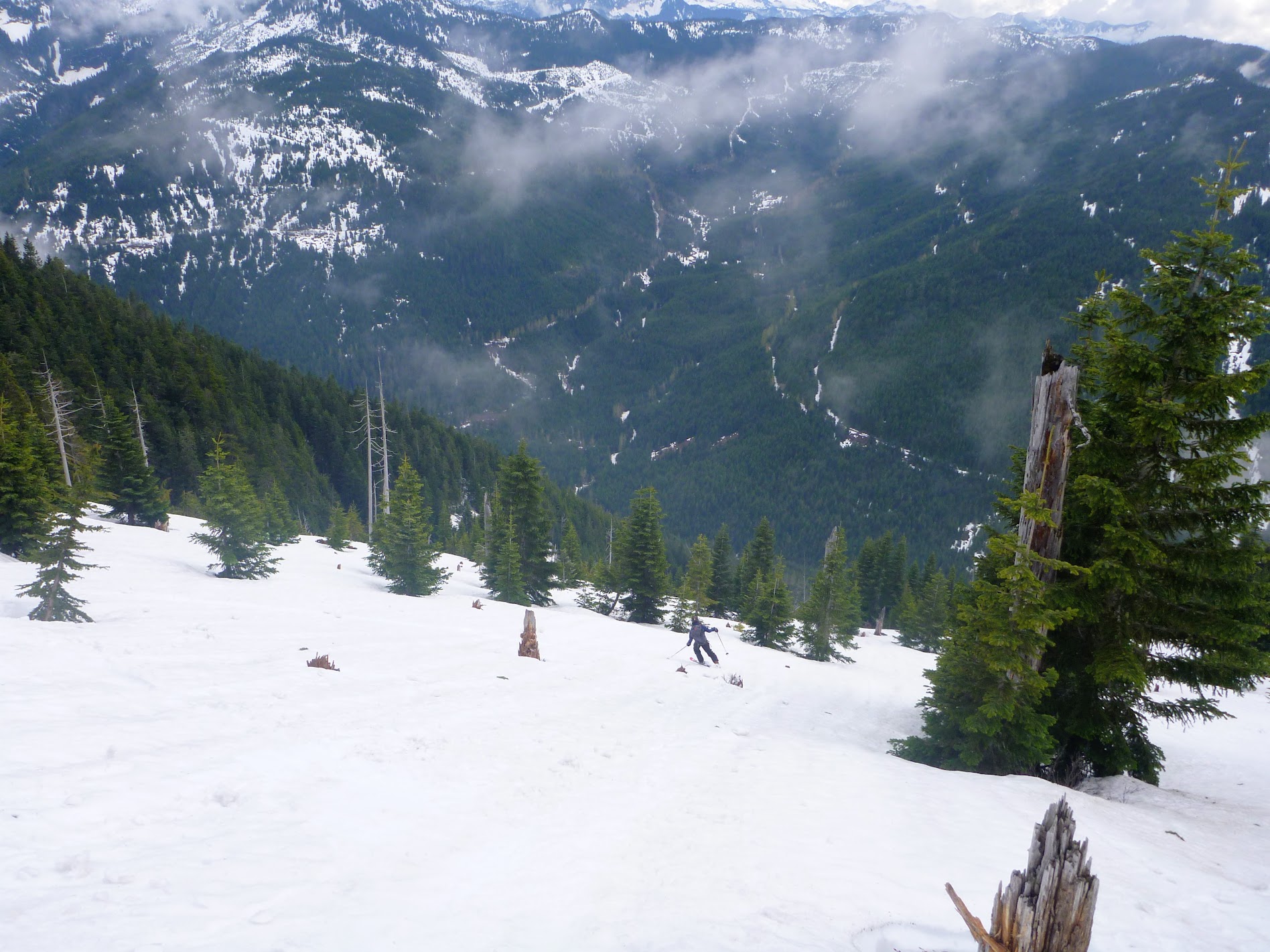 Further down, just before we realized we were screwed.

We had some good turns on stuff that was steep enough to be reasonably fun and then broke through some clouds and saw Chilliwack, which was not a welcome sight. We stopped and actually looked at where we were and quickly realized that we’d aimed at the wrong valley. We were half way down and going mostly away from the car. We tried skiing hard left to circle around, but we kept getting blocked by melted-out patches and little cliffs, so we kept getting forced to lose elevation faster than we wanted to, and it was clear that if things kept on as they were, we’d be at the valley bottom with a bushwhack in all directions, and it’d be dark. This didn’t bode well for me making supper.

We put the skins back on and attempted to contour around back to above the car. There was a lot of skis off and skis on again, and a few creek crossings.

I was really starting to regret not putting in any navigation data, especially since Garmin didn’t include the logging roads. We could see where we were, but it wasn’t clear if there was logging road beneath us. After it was thoroughly dark, it seemed like going down was at least something different than contouring. We quickly ran out of snow and dropped about 600 m carrying skis through second-growth junk.

Devlin found a bottle of Windex and decided that it probably meant the road was near, because no one would carry Windex that far from the road. He was thankfully right. We were on a smaller road than the one we drove up on, but we figured that it probably connected up to the main line where all the snowmobile signage was. After a few kilometres, that proved to be true. On one hand, it was great that we for sure knew we were on the right road, but we also knew that we had driven a fair ways past there, so we still had a few kilometres to walk.

We got to the car and drove out along the Chilliwack River Road. There were countless instances of lots of cars all piled together, with a bunch of people around a bonfire on the shoulder of the road, passing beers back and forth. There were day-use-only signs everywhere but also lots of campers and tents. We saw the red and blue of police cars in the distance and thought that the police were busting up the Covid parties, but when we go to where they were, it turned out they were just responding to one of the party-goers having T-boned another vehicle. Good times.

When we got back into cell range, somewhere around 12:45 AM, Devlin called home and requested that some fish sticks get thrown in the oven. I felt the guilt but appreciated Iva not complaining about making fish sticks and also appreciated that Devlin was on his A-game for all the time that things were suboptimal. Maybe the reason I like to get us into pickles is that he knows how to complain when things are easy, but when it’s a gong show he can show some real toughness.

After that I did some online plant identification and decided that the deadly poison false cilantro was for sure neither poison hemlock nor cilantro. I did find something that looked very similar on some gardening forum where someone was trying do determine if it was their cilantro finally germinating and the people on the forum suggested all sorts of things it clearly wasn’t and then decided it was a weed, which was annoying.

I regretted the 9:00 AM choice for Coconut’s return to the vet.

Coconut got a thermometer up her rump, which she did not appreciate. The ticket for normalizing her gut was apparently getting her to eat 5 mL of Critical Care four times a day. Critical Care is this green powder that you mix up with water to form this stuff that smells and looks like what you’d get if you mixed silage with a bit of blackstrap molasses and threw it in the blender to make a nasty smoothie. The vet enlarged the opening in a 5 mL syringe and told us to just get it into Coconut’s mouth. What’s fairly telling is that it took him all of a couple seconds to sneak the medicine into her mouth last time we were there, but it took us the better portion of an hour to ram the Critical Care into the poor creature. 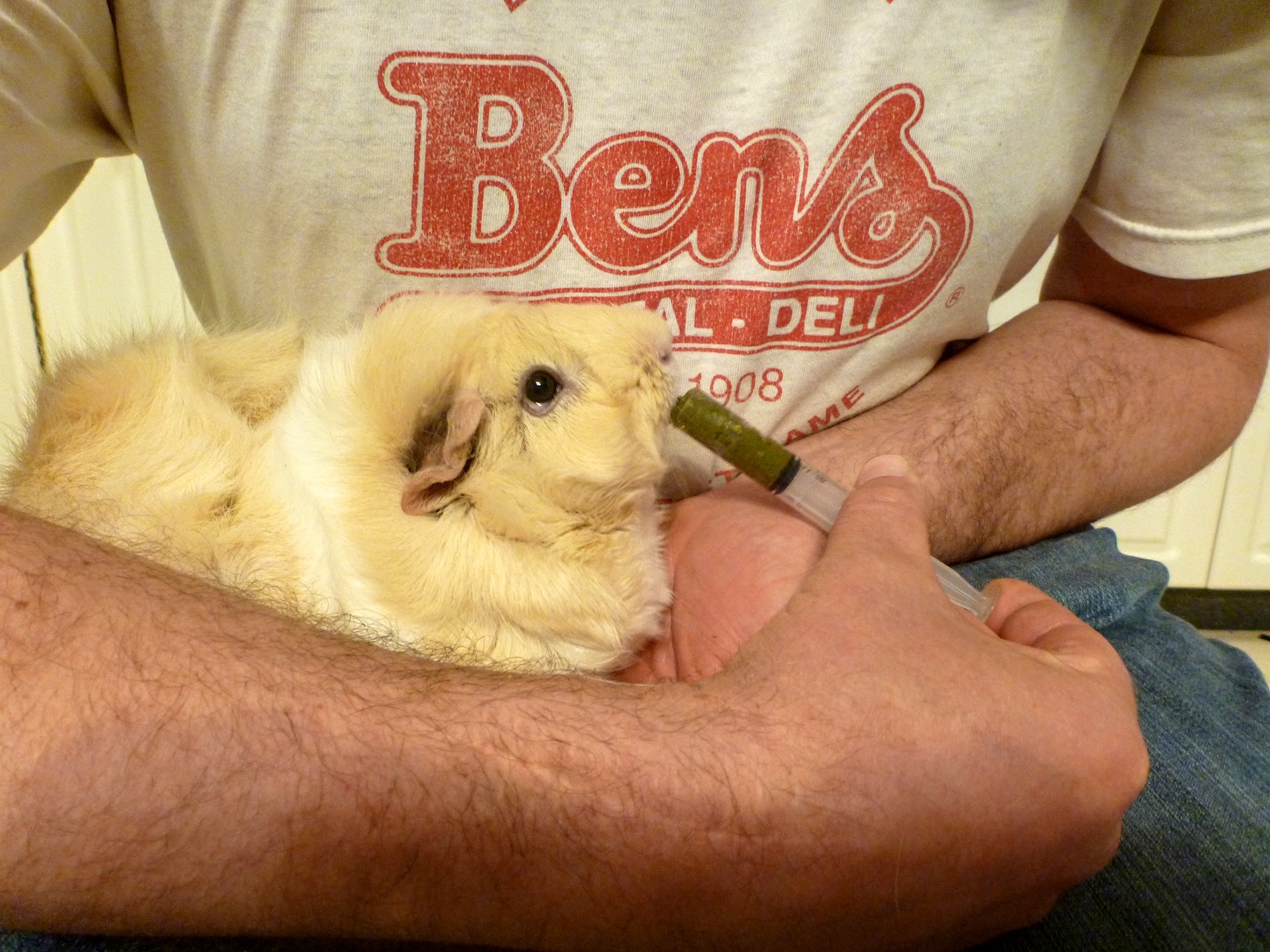 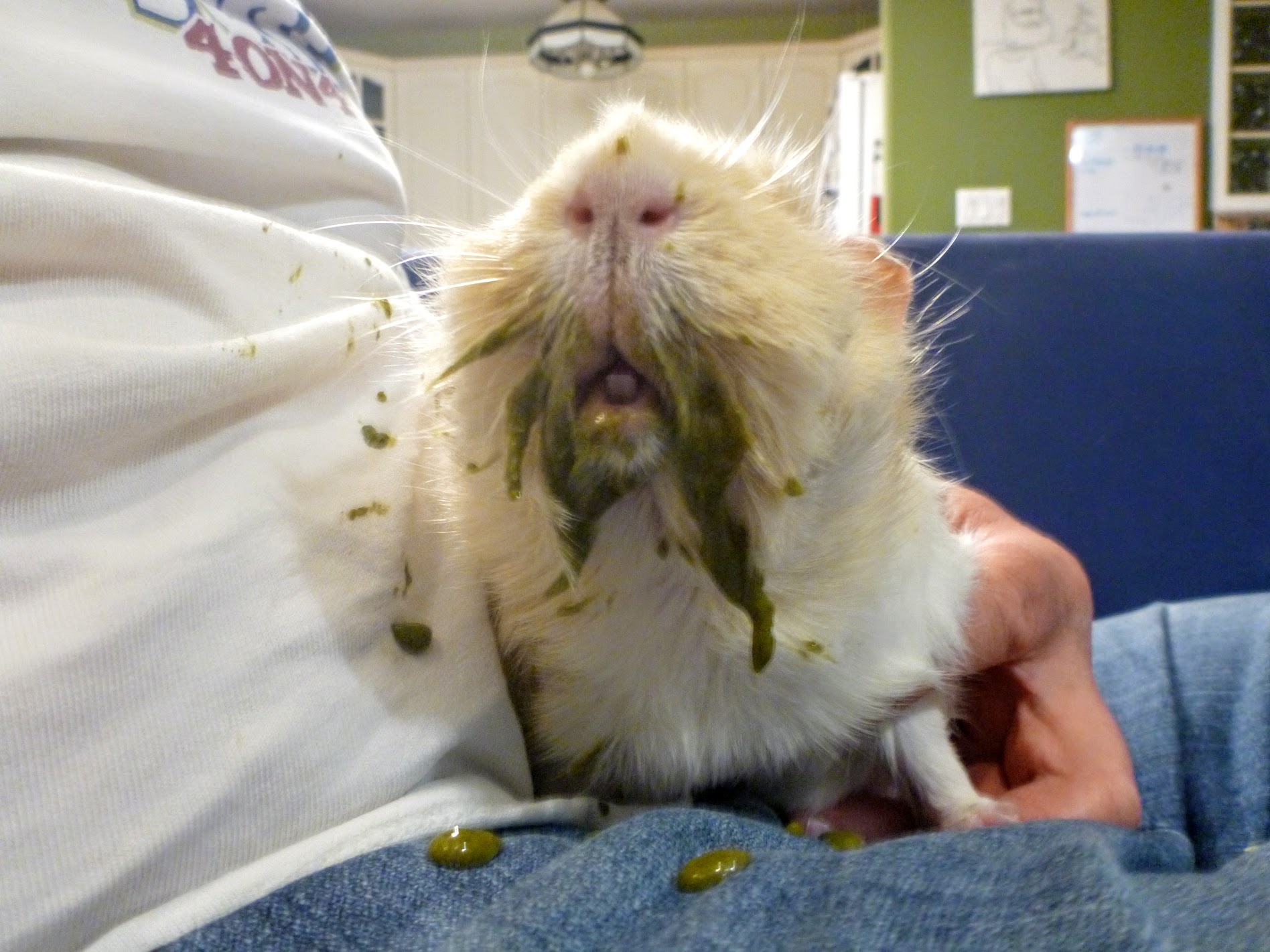 I’m happy to report that after a week of attacking Coconut with the Critical Care and feeling like a jerk, she’s really starting to act normal again. As terrible as the process is, she’s going to be okay. 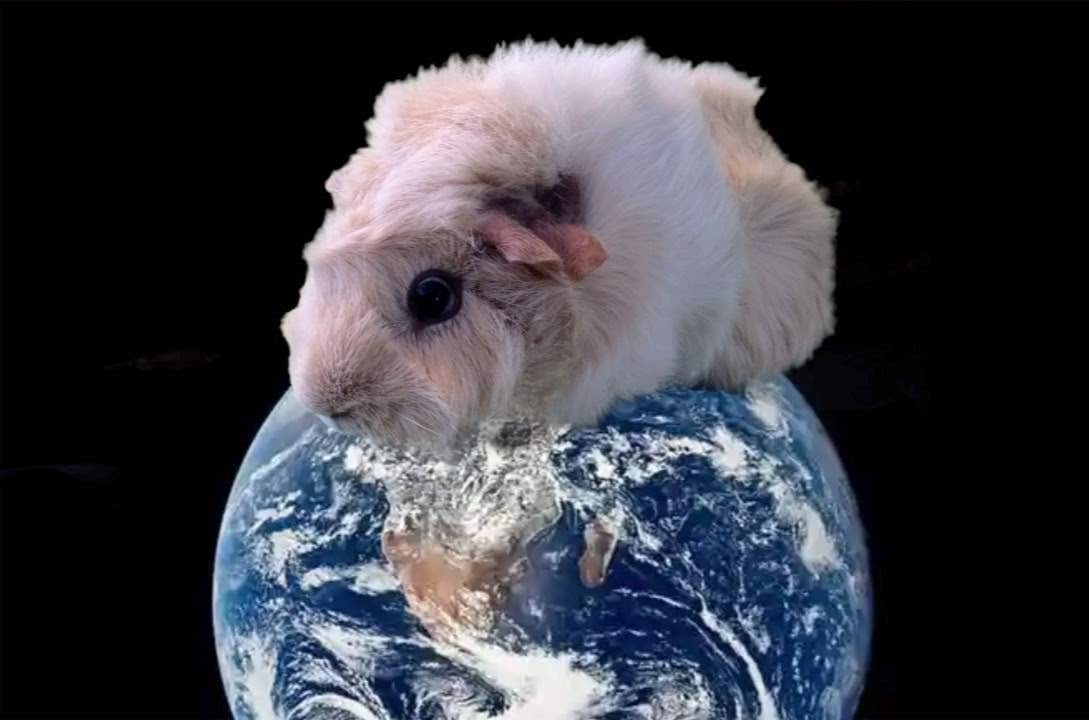 Coconut feeling on top of the world. (photo-illustration by Devlin)

9 Responses to Mt. Archibald and the Deadly Poison False Cilantro, May 15, 2020