Kayak Loop on the Sunshine Coast

For a number of years I have wanted to complete the “Sunshine Coast Kayak Loop” trip, and finally, after my third attempt at organizing the trip, I finally completed it. The trip definitely made for a lot of great memories and stories.

Quinn Ramsay and I, Alex Wharton, are now the third group of people that I know who have completed the loop. I think the previous two groups had an easier time at Sechelt Rapids (Skookumchuck Narrows) than we did. But, the loop is very doable as long as one is cautious at Sechelt Rapids. Read on to hear about our adventure!

The loop consists of paddling north from Sechelt through Georgia Straight past Pender Harbour, then through Agamemnon Channel, and then, finally, through Sechelt Inlet, beginning with Skookumchuck Narrows and Sechelt Rapids. Sechelt Rapids is an area in northern Sechelt Inlet in which the water entering and exiting the inlet is forced into a very shallow and narrow channel. Very sadly, over the years, people have died crossing through Sechelt Rapids. Sechelt Rapids is known around the world as a world class white water kayaking destination. Although it is safe to cross Sechelt Rapids at slack tide, the rapids can be dangerous at high waters and could potentially be fatal for kayakers of our experience to cross at maximum currents. Quinn and I organized our trip such that we would cross Sechelt Rapids on our third and final day. 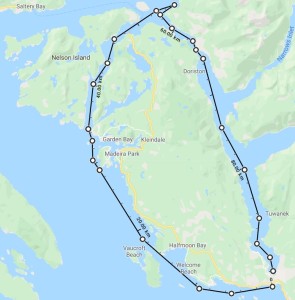 We started the trip with kayak self rescue practice. Given the high likelihood of rough conditions, especially in Malaspina Strait, we had wanted to practice self rescues the week prior, but we didn’t manage to. The water off of Sechelt was reasonably rough, and that made self rescues challenging and more realistic. We eventually succeeded in our self rescues and were ready to embark on our voyage.
As we were planning the trip, we agreed that there was a fairly high likelihood of us, given the potential for inclement wave, current and wind conditions, not to be able to complete the trip and having to abandon the trip part way through. We had arranged that, should we need an emergency pickup, we could be picked up along the coast between Sechelt and Pender Harbour, in Earls Bay or in Egmont. We thought that likely Egmont was where our highest chance of requiring a pickup was should Sechelt Rapids in Skookumchuck Narrows be too dangerous to cross.

Our paddle towards Beaver Island began with smooth ocean conditions. The wind was in our favour, and, after a few hours of paddling, before we knew it, we were approaching Merry Island and Thormanby Island. As we passed by Thormanby Island, we saw a huge group of seals sun tanning on the rocks. We were careful not to get too close to the seals in order not to frighten them from the rocks into the ocean, which disturbs their needed rest time. We stopped in Smuggler Cove for lunch and noted our fast progress after a late start due to our unscheduled self rescue practice. We also thanked the wind for blowing in the direction that we were heading. Last year I led a VOC kayak trip from Sechelt to Thormanby Island, and on that trip I remember at times not being able to make any forward paddling progress due to the wind blowing against us. In addition, from spending time around Halfmoon Bay over the years, I know that some areas in and around Halfmoon Bay can get too rough to make forward progress in a kayak. That day, we were very grateful for the wind blowing northwest, in the direction we were paddling. After lunch we enjoyed another few hours of paddling to our campsite at Francis Point Provincial Park. That evening we enjoyed a magnificent sunset as we were preparing for bed. 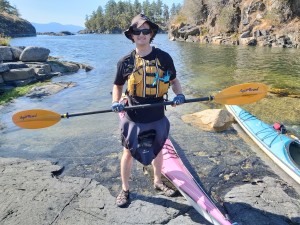 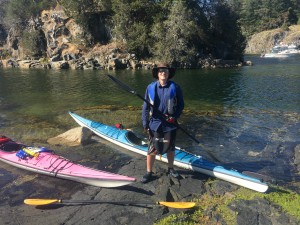 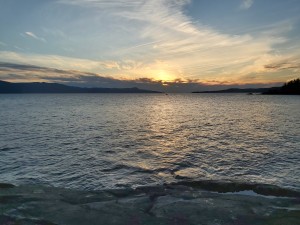 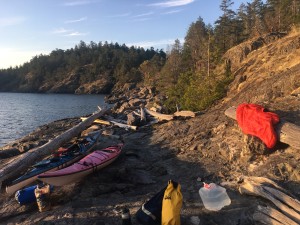 We didn’t know exactly what to expect in Agamemnon Channel, on our second day. We could only imagine that Agamemnon Channel would be calm and wind and wave free, but as neither of us had ever kayaked in Agamemnon Channel, we didn’t know exactly what to expect. We left our campsite a little later than we had planned and were immediately met by large, steep breaking waves. We repeatedly, momentarily, lost sight of one another as we bobbed up and down in the swells. Kayaking through the swells past Pender Harbour and to the entrance of Agamemnon Channel was a little bit frightening, and we were glad that we had practiced self rescues the day before. Had the swells been any larger, I think there would have been a reasonable risk of one of us capsizing and us having to wait on the shore until the waves diminished. We battled through the swells, and as we entered Agamemnon Channel, the swells became smaller and eventually turned into chop before eventually turning into very calm conditions. We stopped for lunch midway into Agamemnon Channel, and as we were eating lunch we heard and saw a baby seal swimming close to our lunch spot in distress. We suspected that the baby seal was searching for its mom, and we hoped that the mom had simply left for a few hours to hunt for fish. Nonetheless, we still felt quite sorry for the baby seal. After lunch we paddled a little farther to exit Agamemnon Channel and, given that we had some extra time before sunset, we paddled around Captain Island and slightly up Jervis Inlet. We spent the night at Little Killam Bay, and before going to bed reiterated our plans for crossing Sechelt Rapids the next day. We enjoyed a pleasant night that never seemed to become truly dark given the extraordinarily bright moon. 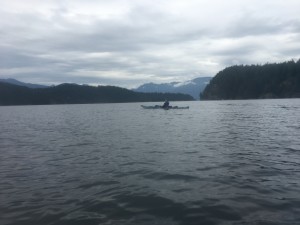 We woke excited and nervous about crossing Sechelt Rapids and our long paddle back to Sechelt afterwards. As we approached Sechelt Rapids, we reminded ourselves yet again of our plan to arrive at the rapids a little before 11:20 am, the predicted time of the maximum current, to view the peak of the rapids from shore and then to cross the rapids at about 2:05 pm, the predicted time of slack tide. The rapids vary in strength throughout the month depending on the range of the tides on any given day. The tides were extreme and the rapids were predicted to reach more than twenty knots per hour on the day that we crossed. In addition, we reminded ourselves that slack tide could potentially be up to about half an hour before or after the predicted time of slack tide and that we should try to watch the rapids and cross them when we thought the minimum currents were flowing, not necessarily at exactly 2:05. We had originally planned on leaving our kayaks at Secret Bay and then walking to the Sechelt Rapids viewing platform, but upon landing on a beach near the rapids and talking with some locals, we learned that we had already passed Secret Bay and that it was not feasible to leave our kayaks at Secret Bay, walk to the rapids, wait until slack tide, walk back to Secret Bay and then paddle through the rapids; the walking distance alone between Secret Bay and the rapids was about an hour each way. The locals pointed us towards the best beach to watch the rapids from given that there was no path to the official viewing center from where we were and also reminded us of the dangers of the rapids emphasizing that over the years boaters had passed away crossing the rapids. The locals also reiterated that we should be extremely careful and that it would be possible that they would be the ones initiating a rescue call should we require one. 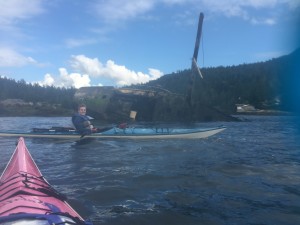 Note: Read the final paragraphs of the trip report for the true reason why we thought slack tide was an hour earlier than it actually was (daylight savings time)! 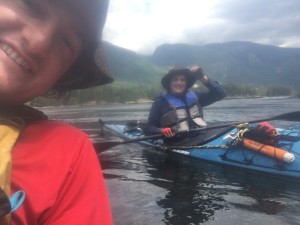 Alex and Quinn in a calm bay in Sechelt Rapids 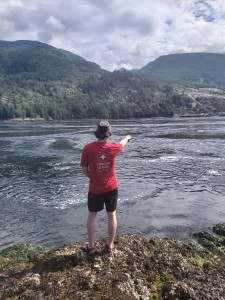 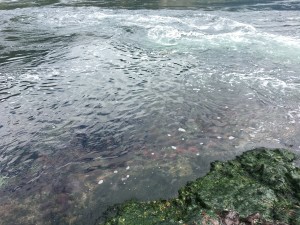 As our adrenaline slowed, we made slow progress into Sechelt Inlet for the first several kilometers as we fought wind and waves pushing us back towards Skookumchuck Narrows. Eventually, the wind and waves subsided and our pace increased. We were slightly worried that we wouldn’t be able to paddle all the way back to Sechelt that day, but the moon was once again very bright and, along with our headlamps, helped us paddle the final section of the inlet in the dark. As night fell thousands and thousands of jellyfish rose to the surface of the water, making the idea of swimming at the end of our trip suddenly far less appealing. Finally, we reached Sechelt, tired and sore, but mostly very happy to complete what had been a very grueling three days of paddling! Alex navigating the final kilometres of Sechelt Inlet via moonlight

Our advice to anyone in the future wanting to cross Sechelt Rapids is to wait to cross the rapids until one cannot tell which way the current in the rapids is flowing; that is when the rapids are the weakest. From our experience of this trip, slack tide could be, in our experience, anywhere from an hour before or an hour after the predicted slack tide time. We didn’t think that the predicted slack tide time could be as far off as it was, and therefore we made the mistake of rushing into the rapids before they were at their true slack tide. But, after finishing our trip and examining more current and tide tables, we realized that the current table that we had retrieved the Sechelt Rapids currents from did not adjust the times of minimum, slack and maximum currents to account for daylight savings time. Therefore, all currents between March 8 and November 1 actually take place an hour later than the time that we thought they would. Therefore, one should ensure that one’s current table accounts for daylight savings time if one’s trip takes place during that time of the year! We also happened to pass over the rapids during a period between a quite extreme outflow current and a quite extreme inflow current. Thankfully, we safely crossed the rapids, but we would advise anyone considering this trip to make sure one’s current table accounts for daylight savings time and also, if possible, to cross the rapids in times of the month when the tides are less extreme.

We would definitely recommend this trip to other kayakers, but I think we would, just as we were aware, caution people that in inclement weather completing this trip would be very difficult and that one should be very careful crossing Sechelt Rapids.

Camping in Little Killam Bay reinforced to me wanting to paddle farther up Jervis Inlet into Princess Louisa Inlet, and I really hope that someday I will be able to complete that trip too!

This entry was posted in Paddle, Trip Reports. Bookmark the permalink.