Kayaking To And Hiking Up Anvil Island

“Anvil Island? It’s so hard to access!” That’s why most Vancouverites have never been on the summit of Anvil Island; but, who could stop a motivated VOC crew on warm and sunny summer day?

To begin the trip, we, a group of six ambitious VOCers equipped for both water and land travel, met at Porteau Cove. Philippe Le Billion, Sarah Pudritz and I, Alex Wharton, each brought our own kayaks, Karen Yuen borrowed a kayak, and Busra Turgu and Ellie Thieu opted for the VOC’s foldable ORU kayak. Busra and Ellie assembled their foldable kayak (something which really impressed the rest of us!), while the remaining four of us packed our kayaks for the day. We were ready to start paddling!

We were expecting the paddle to Anvil Island to take about two hours, but the paddle took much longer than we had originally expected it to. We went to the wrong end of the island, as the dock turned out to be close to the southern point of Anvil Island, not the northern point, and also the ORU kayak couldn’t match the speed of the fiberglass kayaks. We therefore arrived at the start of the trail several hours later than we had anticipated. I towed Busra and Ellie in the ORU kayak for the final few kilometers of the journey to Anvil Island, and, eventually, we arrived – tired, wet and excited for the hike to the summit! 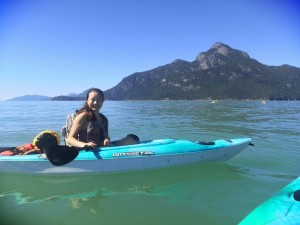 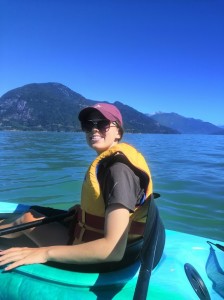 The two trails that lead to the island’s summit pass through private property. One owner generally does not allow visitors on his property. The other trail passes through a Christian Summer Bible Camp. This summer the camp has had to suspend all summer activities due to the ongoing pandemic (COVID for those of you who read this trip report years later) and is very kindly allowing hikers to cross its property. Before the trip, I contacted the camp and was given permission to hike to the summit with a group of VOCers. They asked for a voluntary recommended donation of twenty-five dollars per person.

Upon reaching the beach at Anvil Island, Busra and Ellie announced that they were too tired to climb and would prefer to wait at the beach while the rest of us completed the hike. Philippe, Sarah, Karen and I left the beach, crossed through the camp’s private property, and embarked on the trail to the island’s summit. We trekked upwards for several kilometers. Suddenly Philippe, Sarah and I noticed, anxiously, that Karen was out of sight and earshot. Thankfully, after a few minutes of searching for Karen’s cell number, Karen emerged, limping, from behind a corner in the trail. Karen had hurt her knee and ankle, and therefore her hiking speed had been impeded. The four of us continued on, and eventually Karen decided to wait for the three of us at a lake about two thirds of the way up the trail to the summit. Philippe, Sarah and I continued on and, upon reaching the summit, we were awestruck by the views that it offered. We could see Black Tusk and Garibaldi to the north, the Howe Sound mountains to the east, the Sunshine Coast mountains to the west and Vancouver, the Gulf Islands, Vancouver Island and, way in the distance, Olympic Peninsula to the south. We imagined how beautiful it would have been to camp at the summit and appreciate the sunset and sunrise. 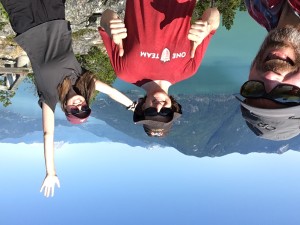 Philippe, Alex and Sarah at the summit

Philippe, Sarah and I descended to the lake where we had left Karen. At the lake we used my SteriPen to sterilize water, and Philippe and I enjoyed a very refreshing swim. Karen’s ankle and knee continued to bother her on the descent, but, eventually, we all reached the beach.

After another refreshing (a little less this time due to the salt in the water though!) swim, the six of us climbed back into our kayaks and enjoyed a very pleasant paddle back to Porteau Cove. We reached Porteau Cove just as the sun was setting over Howe Sound. 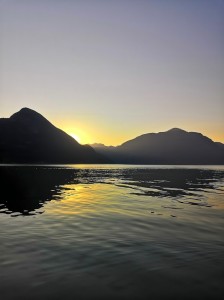 This trip definitely made for a very fun day, and perhaps sometime in the future there will have to be a VOC trip to camp overnight on the summit of Anvil Island!

This entry was posted in Hike, Paddle, Trip Reports. Bookmark the permalink.

2 Responses to Kayaking To And Hiking Up Anvil Island