Posted on October 2, 2020 by Nick Hindley
Trip Date: July 9-13, 2020
Trip Participants: Nick Hindley, Nick Brown, Daniel Alacoque
In-keeping with my general theme of posting trip reports significantly after the fact; here is write up of our trip into Cathedral Provincial Park in mid-July 2020.
Day 1:
After being rained out from everywhere else on the Coast during the mid-portion of 2020’s rainy coastal Summer, we sought the refuge of interior BC’s drier climate. It wasn’t our first choice, in fact it wasn’t even our fifth choice, but nevertheless the raingods determined our fate and we quested up Ashnola FSR to the trailhead for the ‘climber’s side’ of Cathedral Provincial Park. The road was in good shape, the trail; less-so. Still in similar condition as it was after the burn in 2018, the trail is now becoming increasingly overgrown in the marsh and burn areas. The abundant deadfall likes to throw you off track. A chainsaw would do wonders here for decreasing approach time and helping to mark the line of least resistance through the deadfall. Nevertheless, the approach was mostly painless and took 4.5hrs car-to-camp. We hiked into the idyllic meadow camp site in the early evening, directly under the S face of Grimface Mountain. Don’t give up on the hike too early because of your wet feet, instead, keep hiking until you find the big boulder camp site – you’ll know it when you see it. 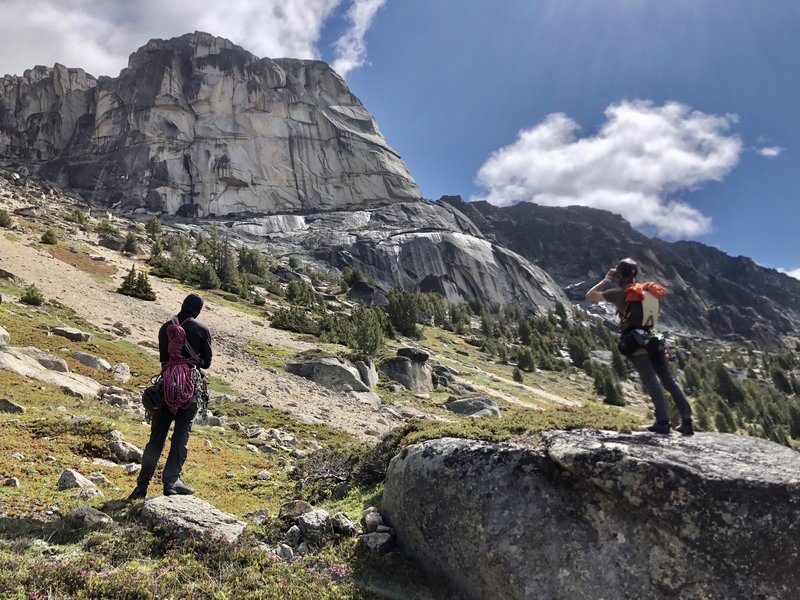 Day 2:
From camp we had spied a prospective ‘new’ line (ie. couldn’t find any existing beta on it) on the S face of Grimface and decided to investigate. The line started out with a boulder problem on friable rock, leading into a left slanting off-width groove. After I bailed off the lead, Daniel took the reigns and punched through the high bouldery section, to gain the OW. After much grunting and thrutching and expressions of anguish, Daniel succumbed to the OW as it spit him out – he ripped a flared piece of gear and inverted, with his leg hung up on one of our half ropes. He was donzo and lowered off, allowing Nick B to jump onto the sharp end. Nick embarked on a similar thrutching mission and eventually pulled out through the friable, flared OW and up to a bulge behind-which he found a sneaky bail bolt. We understood why the previous party had decided to bail at this point; the friable rock of the S Face was not conducive to enjoyable climbing nor solid gear, so we decided to utilize the bailer and be on our way. 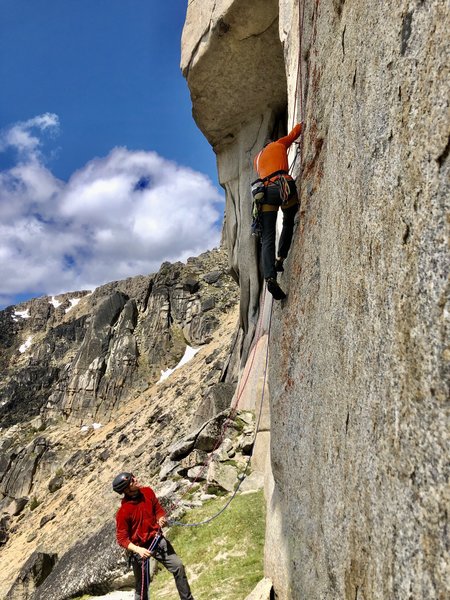 Nick B on the bouldery start. Photo: Daniel Alacoque.

After our OW escapades, we opted to check out the routes on Grimface’s N Face. Long story short; snow obscured the base of the route, which vexed us greatly. We are not sure if we did manage to start up on our intended route, but we are sure that the loose, vegetated terrain that Nick B ended up in, was not of a desirable character. An hour and a half of veggie climbing ensued. Meanwhile I slept under a boulder as Dan and Nick fandangled their descent. 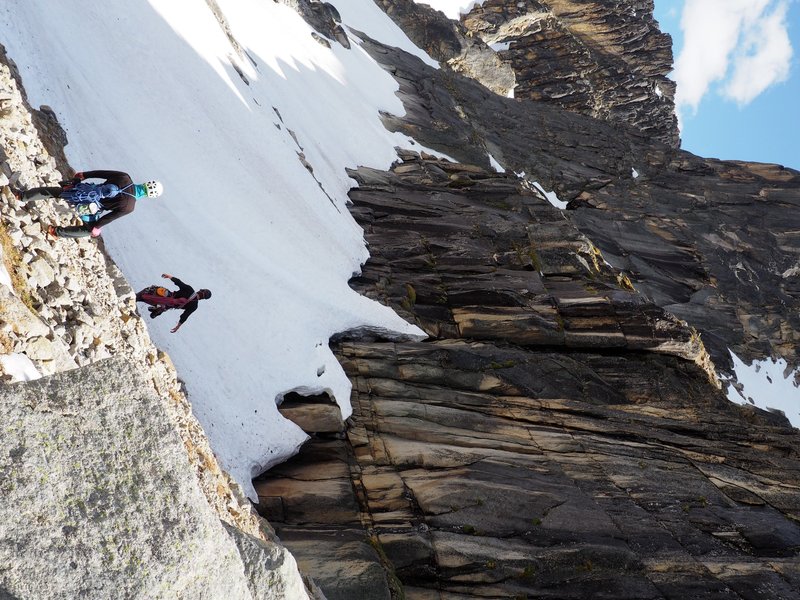 Exploring the N side of Grimface. Photo: Nick Brown

Day 3:
A day of great redemption! …After our faff and failure to launch the day prior. We set out to climb the Sentinel Direct (10c) on the Deacon’s N Face. Finding the base of this route was easy and the climbing was superb. Splitter jams and fun features led us through eight pitches top-quality alpine climbing, before topping out with a loose but enjoyable scramble to the summit. We had some time to spare, so prolonged our descent by continuing along the Deacon’s ridge line, into the Matriarch-Macabre-Grimface traverse. 11 hours after leaving camp we arrived at the Grimface col, and ceremoniously chossaded our way back down to the meadow, where we cracked two of our tightly rationed tall boys to celebrate. 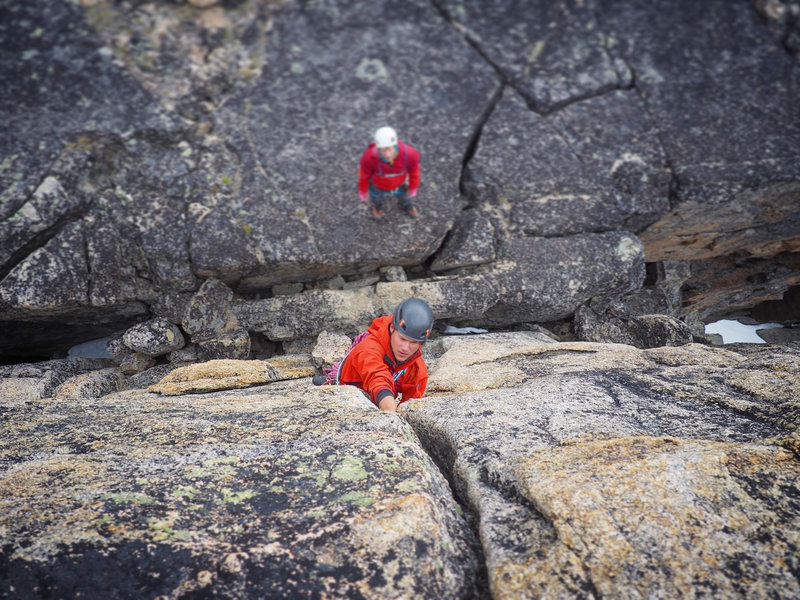 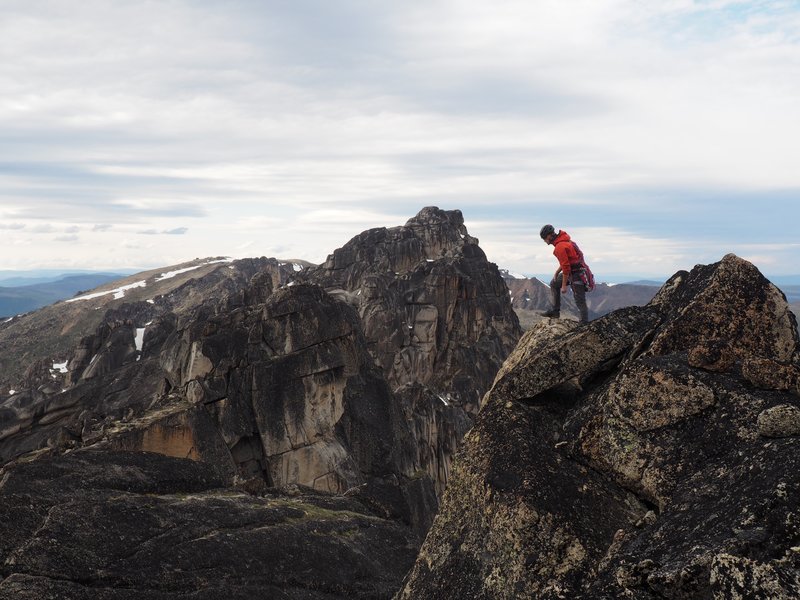 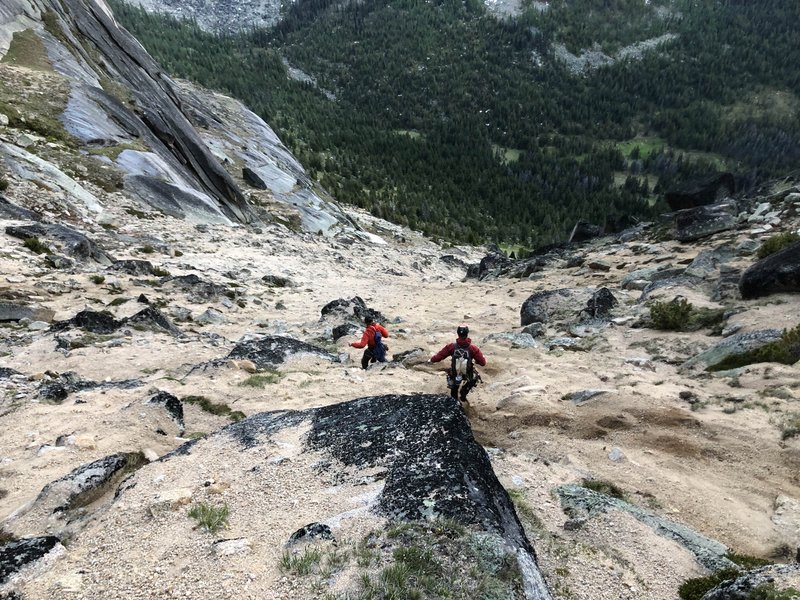 Day 4:
Rain and hail kept us in the tents until the afternoon. Things cleared up in the early afternoon, so we left camp around 1530 and made our way up to the ‘cubby hole’ (SW cleft) of Grimface, to jump on a four-ish pitch route of sorts. We found n appealing looking line that began with a traverse under a roof into a corner of perfect – but steep – hands. Nick B led the first pitch, which we agreed to be graded around 10b (but sharp!). Daniel led p2, which was also 10b/c, with some bold moves and exciting gear spacing. Finally, we got funnelled into the SW Chimney, which was 2 pitches of wet, friable squeezing. I did my best to link the two pitches and punch through to the top – to no avail. After 30 meters, the rope drag became horrendous, and I was hauling up half a dozen meters of slack at a time, between ironically thin gear on loose, exfoliating rock. Temps dropped and winds picked up magnificently in the late afternoon; Venturi transformed the chimney into a frigid wind tunnel – I was toasty warm thrutching up through the chimney, but down at the belay Nick B and Daniel were in full alpine-cuddle mode trying to keep warm. At long last, 10 meters from the top, I reached the end of our 60m rope. All out of useful gear, I redirected the rope over a chock stone and plonked myself deep in the back of the chimney to give a body belay. The other two climbed fast, trying to thaw their digits. Nick B climbed straight on through the belay, and scrambled the last 10m or so to get us to the top. An unexpectedly high value alpine afternoon! We couldn’t find any beta on the first two pitches that we climbed that day; but they were too clean, too obvious, and too good not to have been climbed before. I’m curious if anyone has any info on the route though. 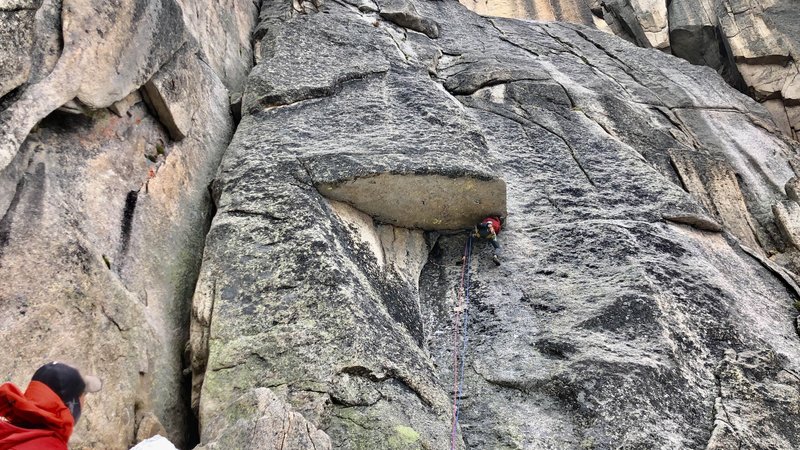 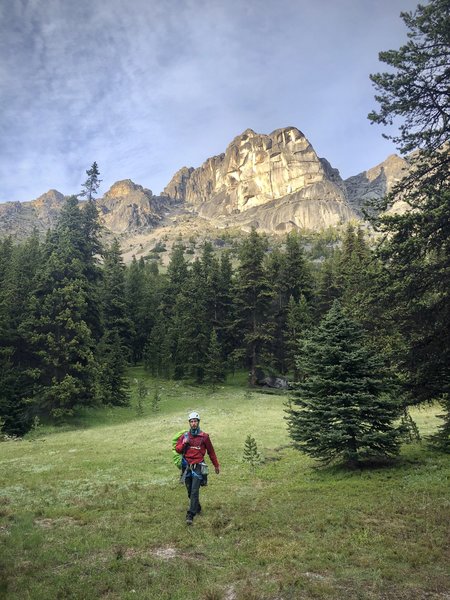 A ceremonious arrival back to camp. Photo: Nick Hindley.

Day 5:
Business time. We woke up around 0600 and hiked the familiar route back over to The Deacon, this time with aspirations to climb The Heretic; a stout 7p 11b up the centre of the N Face. This is a full value, hard alpine route. The second pitch was among the most hard-hitting. It was Dans lead, he quested up and out from the lower angle terrain onto a vertical face; delicate slab followed by non-intuitive moves, runouts and stemming on edges over thin gear. The line was not obvious and Dan spent a solid hour on lead exploring his options from tenuous finger locks. Back at the belay Nick B and I were on edge, as we perched on a suspiciously loose belay ledge and listened to Dan’s battle cries; eventually the moment finally came. “Fuuuuck!! No! No! No!” – Dan had time for three “No!’s” while airborne, taking a 25 foot whipper on a now-welded nut. Definitely the finest alpine whip I’ve seen to date. After a short rest he got back on route, and eventually found a meandering path to the (loose) belay flake that marked the end of the pitch. Meanwhile, back at the belay, Nick and I surprisingly dislodged our suspect belay ledge, and a mini-fridge sized boulder calved out from underneath us, detonating down on the snowfield 50 meters below. 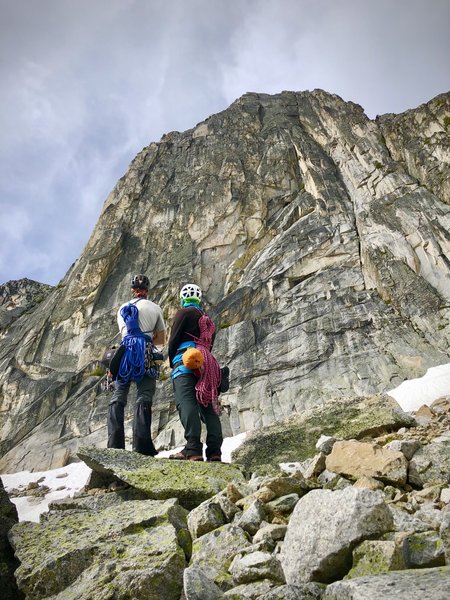 Next, Nick Brown took the sharp end and flashed the strenuous 11b layback corner in impeccable style, while Dan and I struggled to keep our eyes from watering as lichen rained down from above. The next pitch was a self-proclaimed beautiful splitter, 5.9 hand crack. The climbing was deceivingly challenging, thin, and meandering – we all agreed that this was no (wo)man’s 5.9. But we are confident that we were on-route, as the other options were even less desirable. Nevertheless, the sand-bagged climbing was adventurous, challenging, and enjoyable. I led the final three pitches; mentally and physically drained at this point, the loose 5.9 kicked my ass and took way longer than it should have. Fortunately the succeeding pitch was a short and enjoyable 10a with refreshingly little loose rock, or sp00ky moves. Finally we scrambled the final 5.6 pitch and climbed through familiar terrain to the summit of The Deacon. This was most likely the hardest day of climbing I’ve done, and it ranks high among my proudest routes. I’d highly recommend it to anyone with the right appetite for hard alpine climbing.
We raced back down to camp from the Deacon’s summit. All out of food and beer, this would be our our final day in Cathedral, so we packed up in a hurry and raced the nightfall as we schlepped back 14km through the swamp and deadfall back to the trailhead. Meticulous route finding allowed us to make good time on the way back – 3.5 hours camp-to-car; a high output 14.5 hour day all in all.
————
A note on The Heretic (7 pitches, 5.11b)
We found the ‘easier’ climbing to be generally much harder than the guidebook breakdown indicated. The author put up the FA, so the discrepancies seem very odd. We are quite confident that we were on-route though. Below are the author-given grades of each pitch, with a short description of our thoughts on it.
10a – Cool undercling traverse, a couple solid 10b moves in there though
10c – A mega-pitch; sustained and creative climbing. Often thin, we placed a full set off ball nuts. There’s now a welded nut mid-pitch thanks to Dan’s 25ft whipper. Stiff 10d at least. Also, the belay flake is a bit loose, climb higher for good gear.
11b – Pumpy, thin layback. Fair for the grade.
5.9, 5.9 – Here’s where we thought it got pretty wonky. These pitches were 60m of quite strenuous climbing. Good jams quickly turned into inconsistent fingers, laybacking and stemming over sparse and thin gear. I can’t really see this being 5.9 for anybody, more like 10b or c we thought.
10a – Short, fair 10a
5.6 – Worth linking with the pitch prior
Curious to hear anyone else’s thoughts if you’ve also climbed the route. It’s a wild time!
————
TL;DR – Here is an abridged version of this trip report, which I had written for a post on the social medias anyway.
Spent the last 5 days in Cathedral Provincial Park. A bit far from the South Coast, but a great option for anyone seeking drier climate to escape this rainy coastal summer. The approach is a long schlepp, but well worthwhile if you can afford to spend a few days out there.
Day 1: Afternoon hike in 14km to the meadow camp below Grimface. Trail is still in the same condition it was after the burn in 2018; trail becoming overgrown in burn areas, abundant deadfall. 4.5hrs car-to-camp.
Day 2: We did little of value.
Day 3: Link-up of the Sentinel Direct on The Deacon, to the Matriarch-Macabre-Grimface traverse. A fine 11.5hr outing. The Sentinel Direct (10c) is a sweet route with pitches of splitter hand jams, fun features, and relatively easy route finding.
Day 4: Rain and hail kept us in the tents until the afternoon. Things cleared up later in the day so we left camp at 1530. Climbed 2 awesome pitches in the ‘cubby hole’ (SW cleft) on Grimface [See photos for more info], then linking into the SW Chimney route for a final 2 pitches.
Day 5: We climbed The Heretic (11b) on The Deacon; a full value, hard alpine route. Heavily sandbagged as per the grades given in Herrington’s Cascades guidebook… More details below. Then we did the 14km hike out later that day; meticulous route finding helped us save some time on the way out. 14.5hr day. 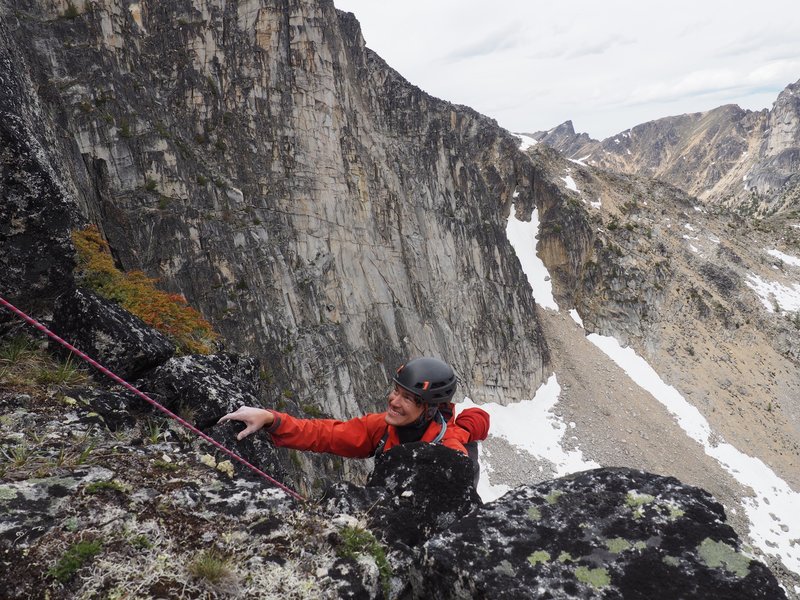 Cheesing at the top-out of pitch 4(?) on The Sentinel Direct. Photo: Nick Brown.