The Anderson River Group is one of SW BC’s many, many hidden gems. The access FSR is just a little over 2 hours from Vancouver, and the approach theoretically only takes half the day – depending on how far you can drive, and how fervently you can thwack. Therein lies the challenge.

Our mode of transport was Nick Brown’s Honda CRV. We were going to have to account for it’s meager clearance with either some tactful driving, or wreckless abandon. Nick B had a preference towards the former. Water bars started around 6km up Anderson River (Cattermole) Main, and continued to worsen until a final creek crossing at around the 10km mark. After spending some time navigating these obstacles and putting a couple fresh dents in the catalytic converters, we arrived at a cluster of 3 ~8” diameter alders across the road. We still had a long way to go, and throwing our packs on here would add an additional 6km to our hike. So we began stripping branches from the downed trees, and clearing as much debris from the road as possible. We rigged up a tensionless hitch to the first two trees, using my 100m Mammut 10mm static, then tripled it up to dissipate the load across three strands. We then hooked it up to the CRV and gave her a tug. After some initial resistance, the fallen trees gave way with a *snap* at the base, and sprung across the road out of the way. Back in business.

For the next few kms the road was in reasonable shape, with frequent but manageable washouts, and the occasional large washout (@ ~10.5km, ~12km) which are navigable for now due to the wide shoulder, but are unlikely to last more than a couple seasons longer. Around 13.5km the road narrows over a cliff, and is rife with fresh rockfall. Daniel and I became the designated road clearing technicians; ie Dan joggged ahead and flung rocks off the road while I drank a few beers sitting on the CRVs roof as we plodded up the FSR. We reached the definitive end of the driveable road 0.2km after the Y-junction with Anderson Middle Main. 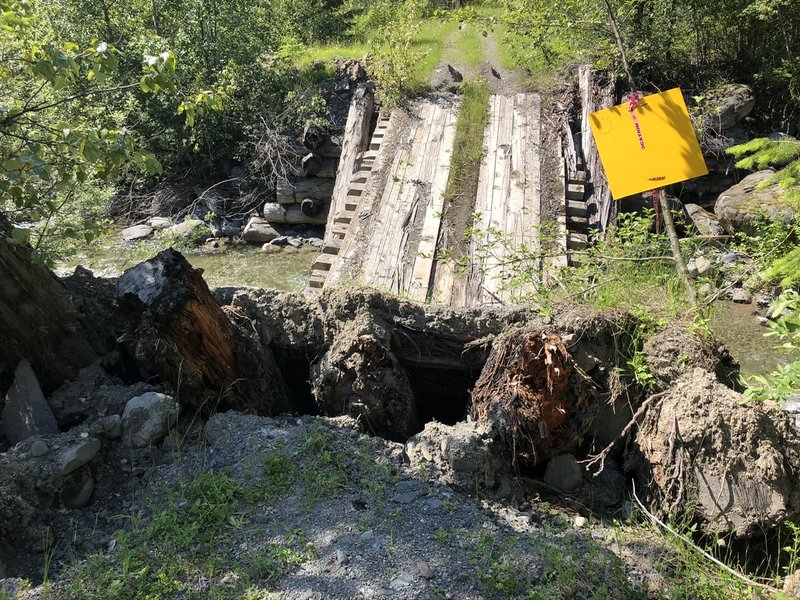 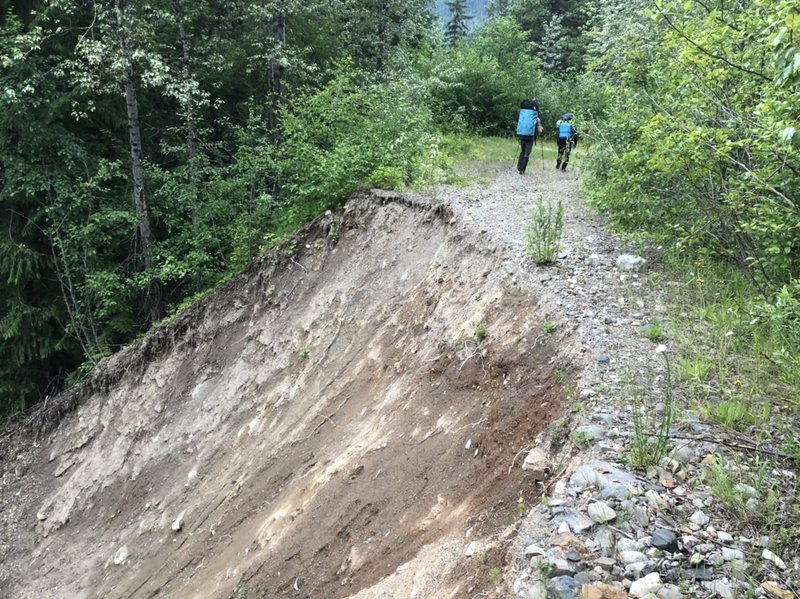 It was 1530 when we left the vehicle behind, and from here it was a 6km, uneventful logging road hike. We hauled in 5 days of supplies, and enough equipment and aid gear to keep our options open for a potential multiday bid or a new route attempt. Our packs were heavy, and we took shifts carrying the frumpy 125L haul bag. After only about an hour and a half, we reached the Steinbok branch that veers into the Valley. This marked the start of the thwackin’. For the next hour or so, we pushed and crawled through dense, relentless alder tunnels, with only occasional respite. It is on one of these instances that we caught our first glimpse of the mighty prow of Steinbok towering above – an impressive sight. We continued on Steinbok branch, beyond the N-600 turnoff, until we were more or less a straight shot east of Les Cornes. We battled uphill through every manner of thwack – brittle thickets, swampy marsh, and overgrown clearcuts – until we eventually gained the toe of the old growth, giving rise to speedy and pleasant travel. As night fell and we donned headlamps, we scrambled up the talus and yarded through, under, and over the dense subalpine firs. Finally arriving to the base of Les Cornes around 2100. 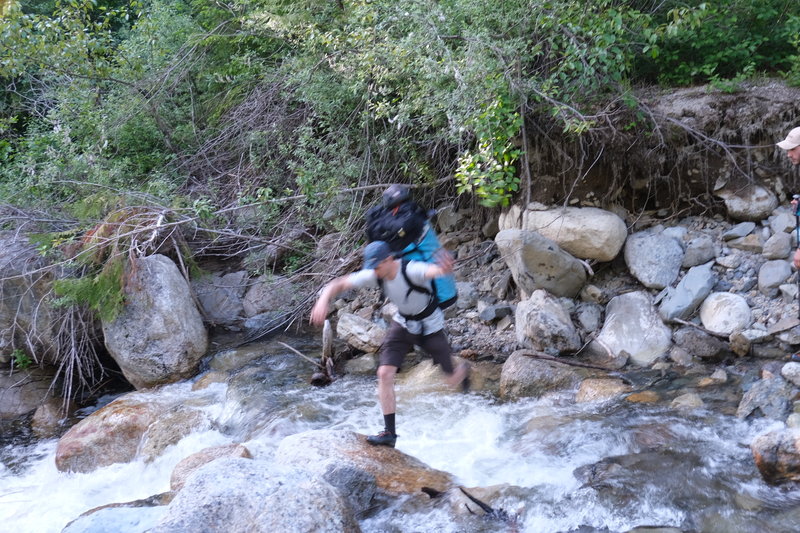 River hoppin’. Astoundingly, there was actually a drivable road here as recently as 2016. 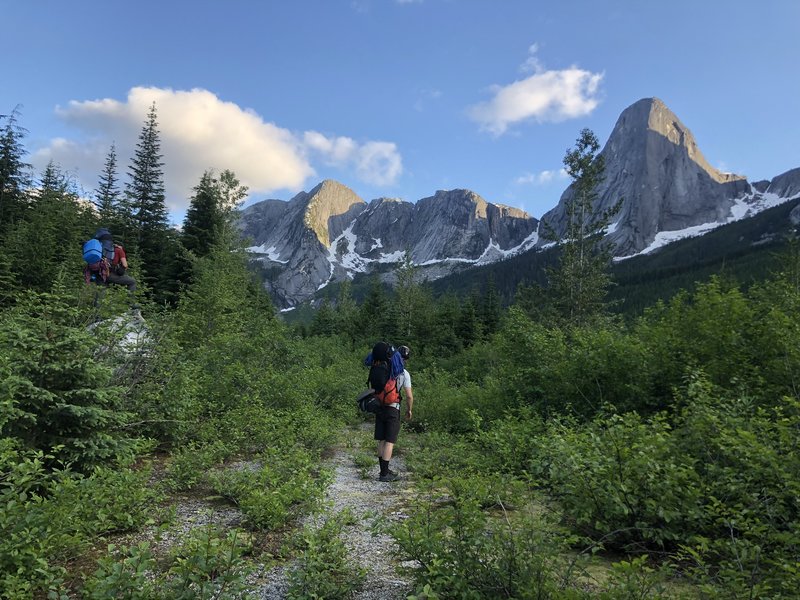 Why does nobody talk about this? Photo: Daniel Alacoque.

The bivy options were terrible. Icy snow and loose, poorly sorted talus surrounded the base of the wall. With little desire to start carving a tent platform in the snow using nut tools and pot lids, Nick B and Dan claimed the only flat-ish spot to be found and began fashioning a talus platform which they lined with fir bows for comfort. Meanwhile I opted for a long hanging hammock amongst the firs – weary of stringing it too high and putting myself the line of fire for detritus calving off from the wall above. 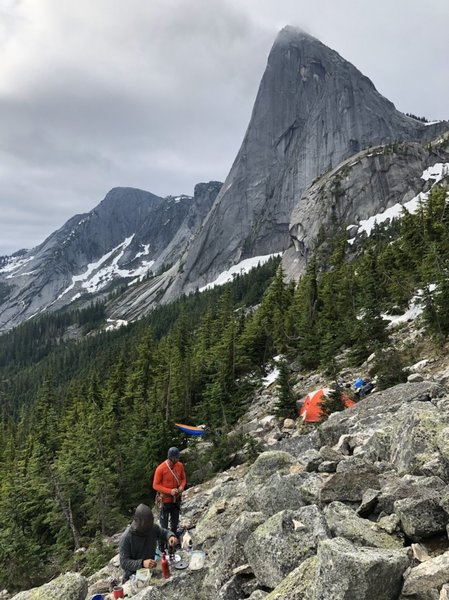 A base camp of sorts.

The next morning we set out from our camp at 0900, and made the 1 hour approach to the base of our route; Springbok Arete (11a) on Les Cornes. We opted for the ‘Sprung Cock Erect’ variation, which adds 3 stellar pitches of 10b and c to the start. Snow buried the base of the route, so we avoided the lowest crux and jumped straight into the fingercrack to start out this excellent variation. The third pitch is especially memorable; with a few wild exposed moves off the belay, into a fine splitter. Daniel’s link-up of pitches 7 and 8 was an impressive feat, as he topped out pitch 8 – a burly 10+ offwidth – towing 50 meters of meandering rope drag below him. As if 10+ offwidth wasn’t enough. The following 5.8 traverse pitch is very fun, and a good opportunity to recuperate before the upcoming 11a. With a big reach up to a crucial fingerlock, we each fired through the 11a with gritted teeth followed by wide grins. Another superb pitch. We finished the route with a link up of pitches 11 and 12, for a full 60m of 5.9 and a short scramble at the end. We traversed the exposed ‘au cheval’ around 1930, and began our descent, which went off without a hitch. Once we reached the snow, we found a couple anchors along skiers right which we rapped from, to avoid an icy skitter down into the ‘schrund of sorts below. In summary, we were on route for about 8.5 hours, and linked/simul-ed pitches 4+5, 7+8, 11+12. The descent back to camp took us roughly 3 hours; including the 1hr approach it made for a 12.5 hour outing camp-to-camp. 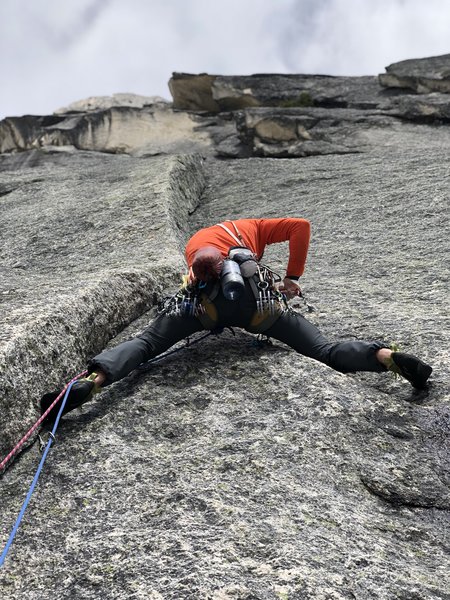 Nick Brown spreadin’ em on the first pitch of the SCE variation. 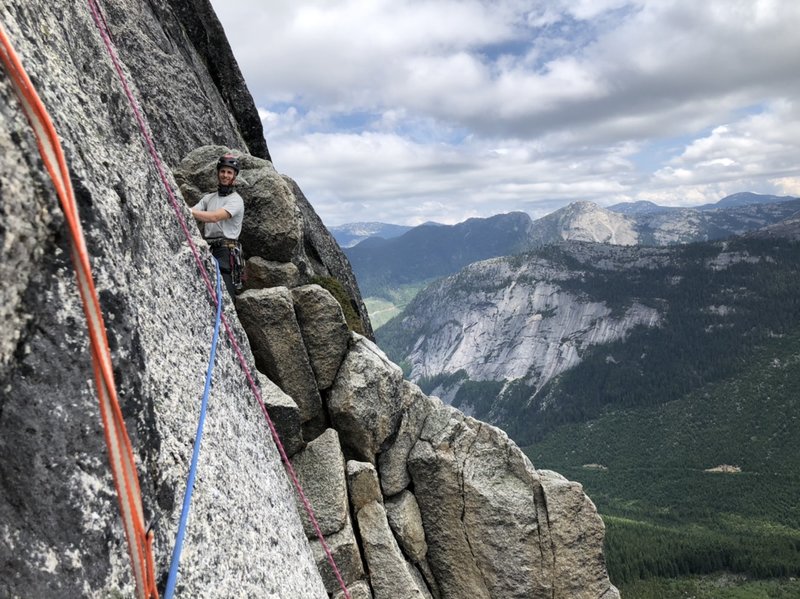 Cheesin for a reason; Nick Brown following the traverse atop pitch 3 (10c). 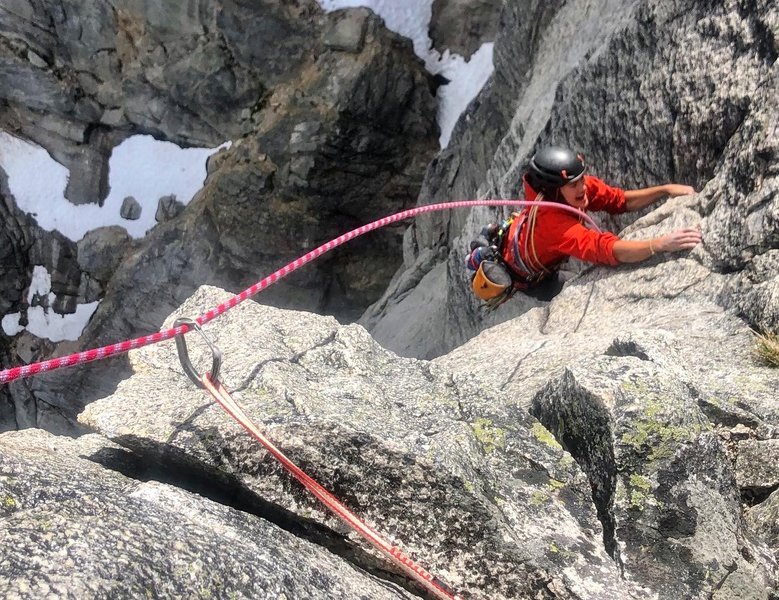 Final moves to the belay on pitch 10, 11a. Photo: Daniel Alacoque. 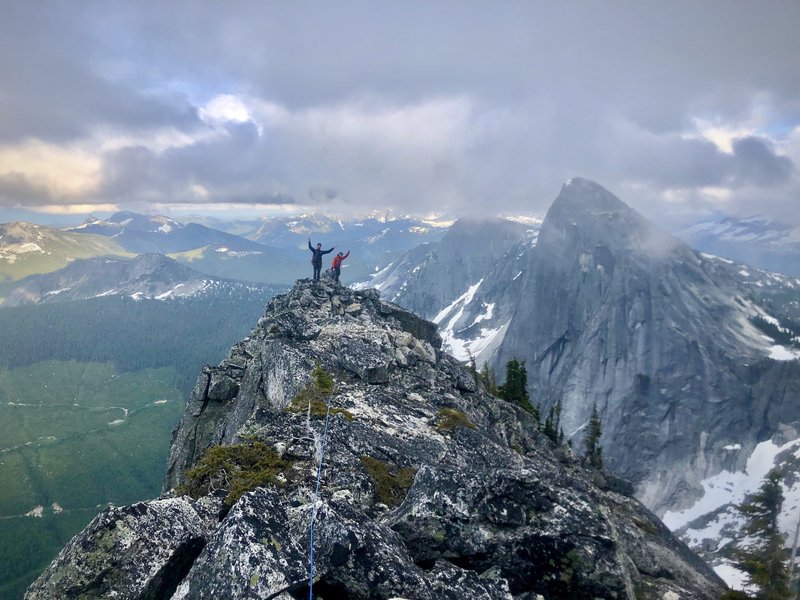 Top out of Springbok Arete. Steinbok towering in the background.

The next day, the rains that we had feared may arrive came to fruition. An InReach weather forecast shutdown our optimism and cemented our decision to bail out of there. We packed up our gear and food – much of which had not even been touched – and began the thwack back to the car. While it was a bummer to have hauled all the extra gear in there only to be rained out after 2 days, it came as no surprise. We were nevertheless stoked to have gotten in a very solid day of climbing on a quality route. On descent we shaved about an about an hour a half off of our approach time, being now familiar with the route and avoiding the worst of the thwack. We arrived back at the car in good time, leaving enough daylight to drive back into Hope for some diner chow and plan the next leg of our trip.

As you may have gathered, the access to the Anderson River Group is deteriorating. Rapidly. Back in the 90’s, logging roads took you pretty much straight to the base of the walls. As recently as 4 years ago, it was still possible to drive to N-600 branch (see: Steph Abegg TR). Now, this gem is guarded by deteriorating logging roads and tumultuous bushwhacking, slowly but surely fading deeper into obscurity. Another year or two will likely knock the road access back another 10km down the FSR. I’d encourage you to get in there while you still can, it is truly one of the more unique and aesthetic valley’s I’ve seen in BC – and as far as I know is not protected in any way. This place would benefit hugely from renewed access. The potential for new route development is widespread. Skiing potential is there, but yet to be confirmed. Did someone say VOC cabin..? 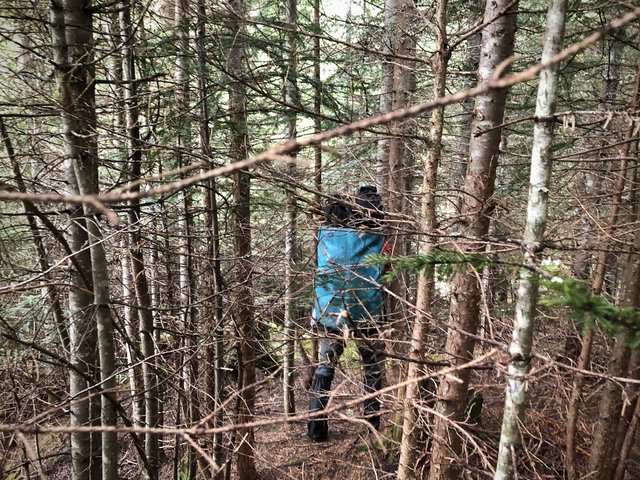