Long ago Shuyu offered to organize a firewood trip to Phelix Hut, then it appeared we were going to Harrison instead, but the Harrison Permit wasn’t ready, so it was Phelix. Shuyu and I decided to drive up Friday night so as to avoid getting up painfully early to drive up Saturday, and at that point the other two “Interested” people decided that instead of coming with us, they would get up painfully early and investigate the larches in Manning. At the last minute we got Celine. The plan was to cut up some trees which were across the trail, Shuyu wanted to learn to operate the chain saw, and we needed to cut off the lock on the donation box. Celine wanted to see the hut.

The drive up was uneventful except Celine doesn’t like Pemberton MacDonalds.  I think she would starve to death if the only other option was MacDdonalds.  We got to the trail head after dark. We thought it might be a good idea to put up our tents on the creek side of the concrete barrier, but this was a mistake, because the creek was very loud.  There was only one other car there but another arrived around 11pm with two people who slept in their car.  The moon was very bright so it didn’t really get dark.  I was getting back muscle spasms so I knew the trip would not be easy for me. Shuyu performed some excellent massage on me and this helped. We decided to not spend the night at the hut because we could avoid carrying sleeping stuff and cooking stuff.  I found the trip to the hut really hard because of my sore back, little sleep, and I was dizzy and short of oxygen.  The other two waited for me often and Shuyu even carried my pack for a short distance.  Celine got bored with waiting and went up to the hut to meditate. About 400m from the hut Shuyu and I stopped to play with the chain saw. It started OK and the two of us ran it for about an hour and cleared the four trees and made 2-3 days worth of firewood. 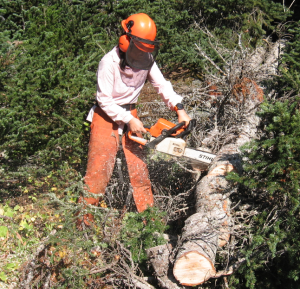 Shuyu and the Chain Saw

At this point the saw didn’t want to cut any more; I think the chain brake was on. Shuyu wanted to cut some more, but my back wasn’t happy, and the saw didn’t want to run.  We went to the hut and I quickly ground off the old combination lock on the donation box while Celine  and Shuyu hauled the firewood that we had created. 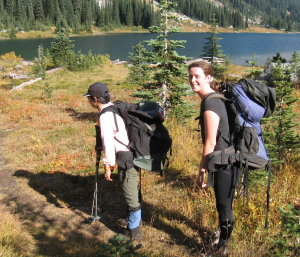 The angle grinder is a wonderful machine and it cut off the lock like a knife through butter, emitting a lot of wonderful sparks.  If I wanted to steal a lot of bikes, I would certainly get an angle grinder.  We emptied the cash box and brought down lots of money.  We gave the grinder to Celine to carry, and I carried the lunch, which was pretty well all gone by then.  Shuyu offered to drive home Saturday night and we stopped at Splitz in Whistler, avoiding Macdonalds.

The discussion about whether the club should buy a new chain saw, continues.  Light weight is good because we carry it more than we use it. Maybe it would be better to just rent, and then use the saw for many hours per trip, with maybe three operators.  If there was a club exec position called chain saw mechanic, that might be another solution.  Anyway the huts seem to provide a nice revenue stream for the Club, which we need in the time of the Covid.

One Response to Phelix Hut Oct 2-3