Why are we doing this? The Authorities removed the bridge across Roe Creek, which we used to get to our hut. Fine, we said, we can build a footbridge. But Powder Mountain Cat Skiing wants a new bridge for their customers. The First Nations people don’t like Powder Mountain because they believe there are spirits/ghosts in the mountains around Cypress that are disturbed by the noise from the motorized traffic. Meanwhile we would like access to our Brew Hut. Tom and Cassandra explored various alternate routes and decided that the route from Brandywine was the bushiest, and ugliest. 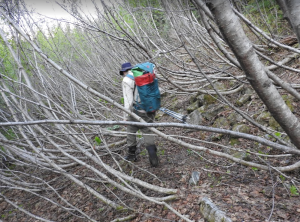 But Carla and I took the kids up there once or twice about twenty years ago, and we did OK. I figured that about twenty hours with various power tools might make the old route good again. 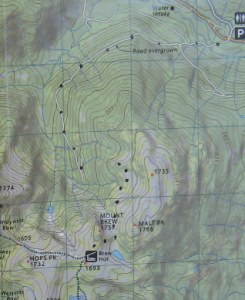 Planning Friday evening for a weekend trip is not ideal. The weather forecast was atrocious, with only some argument about whether Saturday would be worse than Sunday. Some people had to work Saturday. Some people wanted to ski Sunday. Not knowing who was coming made it somewhat more difficult to decide what tools to bring. After the repair place closed, I determined that the brush saw would not start for me and then Shuyu decided that if there was no brush saw, she would go running 35k along the Baden Powell trail instead of coming on our trip. We planned to do car camping and the nice thing about car camping is that you can bring everything, spare dry clothes, spare food, spare tools, guitars, deck chairs, tarps, but I’m getting a bit ahead of the story. Cassandra said to bring the brush saw to her place and she could maybe get it going, so Saturday morning, not too early Cassandra got it going. She persuaded Ross to come, and we were on the road. It rained very hard for the drive, but we didn’t get lost on the roads and by the time we were parked it was only sprinkling on us.

The three of us set about to do work, and we spent the first hour trying to get the brush saw working. We decided that the loppers were faster and less complicated. We saw a challenging log for the chain saw but decided to leave it until we could tell that the trail was going to work. We crossed a small stream then a larger stream, then we discovered the remains of the road which we were trying to follow.

I got hungry and returned to the car. Other cars began to arrive and we started stringing up tarps. Some guitar playing happened, and Tom arrived with firewood. I decided to sleep in the Jeep to save wear on my tent, so I did that. I guess the others went to sleep eventually. During the night the sound of rain on the Jeep roof was very loud. 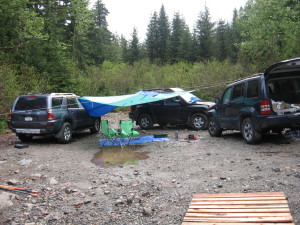 Sunday morning so many cars had arrived that we were short of tools. Cassandra and I cut a path through the challenging log with the chain saw. Shuyu arrived and she and Cassandra headed for the hut, but did not make it. I went up the trail a bit to throw dead trees off the road and I noticed back at the cars a couple of motorcycles had arrived, not ours. I decided that my best job might be “guard” as our cars were mostly unlocked and several tents and deck chairs were available if somebody wanted to steal them. Lucy and Alberto went skiing.

Chain Saw Envy Around noon Piotr and Kirsten arrived with a battery powered chain saw. We were very impressed. No two-stroke gas to leak into the Jeep. No fiddling with the screws to get the mixture right or to get it to idle without shutting itself off. No pulling on the starter cord until your arm falls off. Just squeeze the trigger and away it goes. Apparently it runs for 45 minutes and then you send somebody back to the car to get another battery. Cheap? Sorry, not cheap. I think it is unreasonable to expect that mere university students can learn to be chain saw mechanics. Just think of the reduced carbon footprint! Come on AMS, throw money at us for an electric chain saw!

We did just over one kilometre. There is still a couple more kilometres to do but it looks like it might be an OK route, at least for the summer.

This was not really a VOC trip. We did not advertise it. So only people who heard of it, went. We hope that we can get a couple of real VOC trips going to finish the job, complete with rides and some people who aren’t as tough but think they might like working on the project. We will need cars, less Covid, and more planning, and we should do it before the Authorities shut us down because of forest fire danger.

The bridge across Brandywine Creek is rotten but should work as a footbridge for a few years, and by then the Roe Creek route may be going again, or we can build a footbridge. 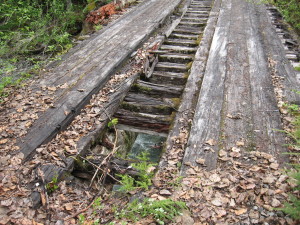 This route is especially handy for people who want to do the Alcoholic Traverse, as this puts you somewhat near where you left the car so you don’t need to park cars at both ends of the traverse.