Petition to bring back Pinterest hand heart summer hike pics for the new addition to your Instagram feed: Joffre Lake #4

Let’s start with the trailhead (1215m). It’s a little tricky to spot if you’ve never been there before, as it’s a thin gravel pullout along side the Duffey Lake Rd (Hwy 99). I had read online that it was ~40.5km on the odometer from the Petro-Canada in Pemberton, so after we passed the Joffre Lakes parking lot and the green gravel shed, we began looking out for it. As we passed 37.4km, Alec mentioned that that kind of looks like it. I continued driving. That’s when Alec produced his first belated-revelation of three over the trip, #1: he had actually done the hike to the hut before! So eventually we turn around, though now a cinnamon-bear was ambling along the road, so we chatted with it a bit. On the return trip we reset the odometer and noted the following, TH from gravel shed, 3.7km; from Joffre Lakes Parking, 7.6; from the Duffey Lake Rd gate, 20.4. Of course you can also use a GPS map

Note: Older guidebooks like Kevin McLane’s Alpine Select and Matt Gunn’s Scrambles in SWBC approach the trail via the Cerise Creek Main FSR (accessed at Van Horlick Creek). This logging road was apparently decommissioned in 2008, so no longer drivable because of large trenches and a removed bridge.

The trail descends through swampy grass to Cayoosh Creek. The original bridge was washed away in the landslide, and only a cable strung between two trees remains. There is a new log bridge with planking and a handline 50m upstream. A large wooden sign indicates the summer trail on the far side. The trail stays on the West side of Cerise Creek, and is well marked by reflective diamonds through the forest (freshly cleared of downed logs) and bushy logging road. Then onto the landslide, which is marked with orange Pac-Man dots. The force of the landslide was really very astonishing. On the far side, two or three marked trees in, the trail forks. The lower ‘Glacier Trail’ is the obvious one, while the Hut Trail ascends a little bit more steeply, but is something like 800m shorter. 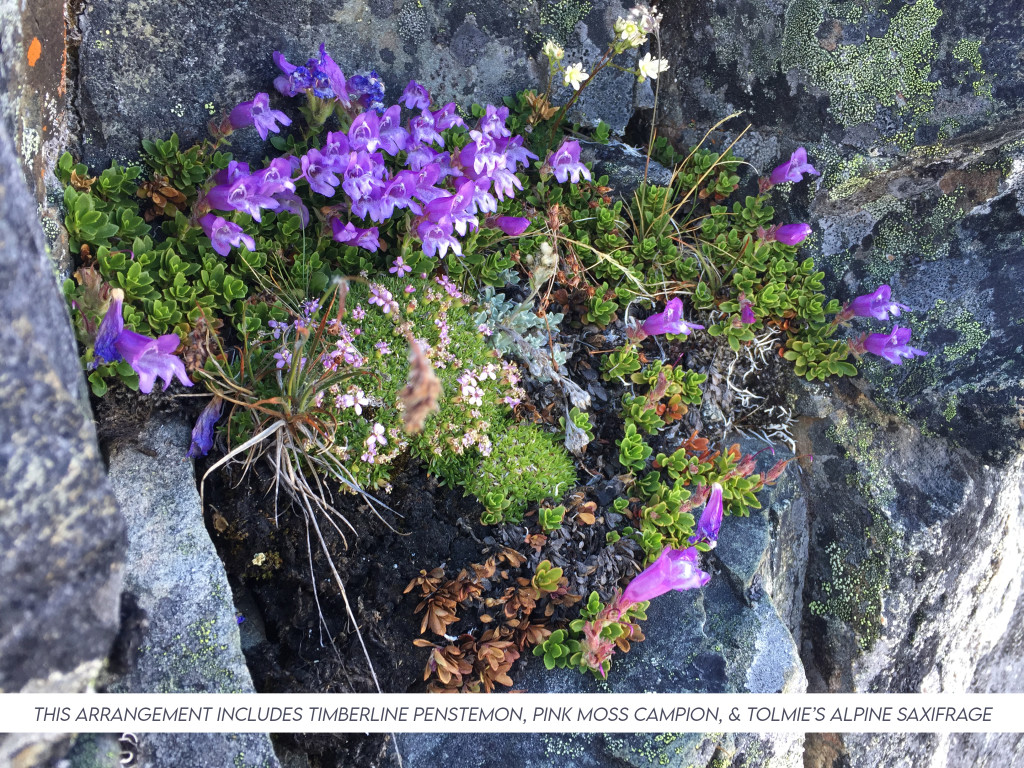 Over lunch at the Keith Flavelle Hut we browsed the log book. Revelation #2: Alec’s family is longtime family friends with the Flavelle family. From here we followed the Matt Gunn route up the South-East face of Joffre Peak. It is a fourth class scramble with careful route-finding, an ice-axe and helmet is recommended. The ascent took roughly four hours from the hut. To avoid spending time on Anniversary Glacier, we went up a snow gully starting at 2100m, 45°. We kicked steps heading up, but chose to wear crampons on the way down. From the top of the first gully, we skirted the very edge of the glacier and ascended on rock to the right of another snow gully. At the top of this was a rope we assumed was a friendly hand-line, but it led up steeply, and it turned out the best scrambling tended climber’s left and up. From the right of a large (permanent) snow patch, a four meter wide ramp leads out again to the east ridge, which is great scrambling. There is a rappel station above the supposed crux (exposed but solid rock) which we didn’t use (three sun-bleached slings & aluminum ring). From here the grade is easy, but traversing across the top of the Aussie Couloir (to avoid the sub-summit) was our least favourite part because there was so much loose rock, and a summer slide wouldn’t be quite so fun as a winter descent. The peak is top-rate, enormous views of the Duffey Lake area peaks, then farther off, the Whistler-Blackcomb area, and maybe even a guess of Baker off to the South. Lytton was 60km to the East over Stein Valley, and Environment Canada had forecasted the smoke symbol for Pemberton

, but we had lovely clarity.

It ended up feeling like a pretty big day. On the way down we met up with a mountain goat loosing its coat at Motel 66 (apparently named for its elevation of 6600 feet). Back at the hut we did a lap of the small lake, and settled in for the night. Revelation #3: Joffre Peak was the site of the fatal VOC accident January 2015, involving Stephanie Grothe, Elena Cernicka, Neil Mackenzie. The hut has an open-plan loft and is by donation. It is well worth it, it seems from the log-book that it really only gets super crowded during the ski season – we had it to ourselves. There are bugs at dusk and dawn, but never overwhelming, and somehow the cabin seemed to remain bug free. We had a relaxed morning with a game of chess, then headed home with a quick climb at the Electric Edge crag near Pemberton. 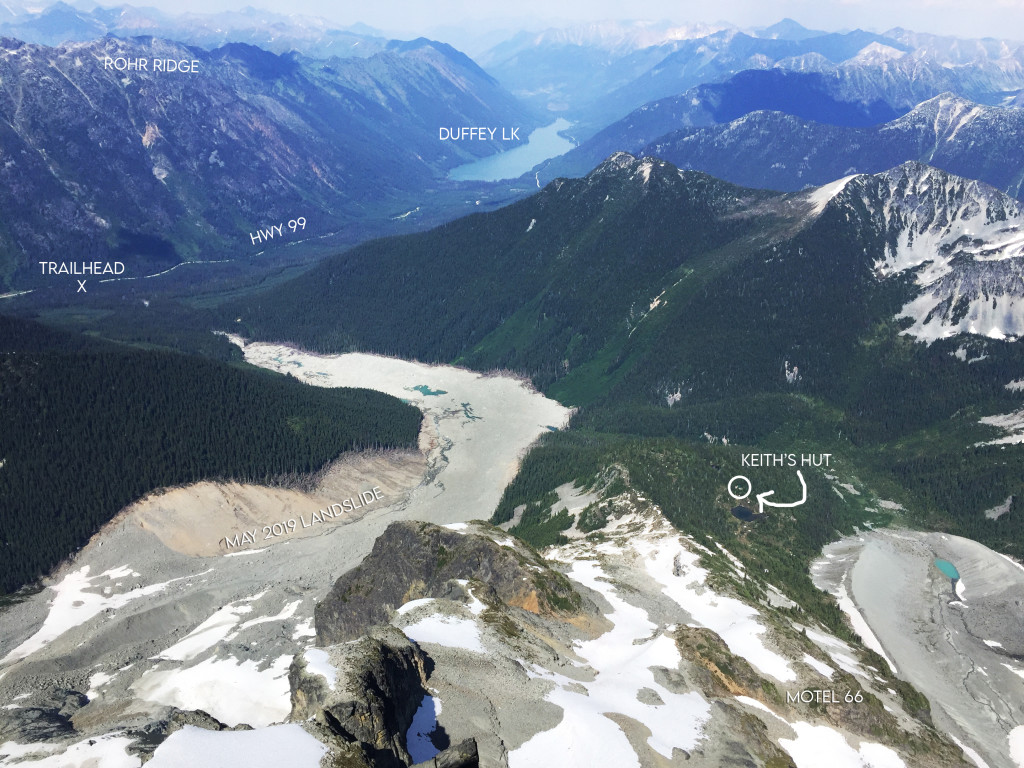 This entry was posted in Climb, Hike, Trip Reports. Bookmark the permalink.