The June 2021 heatwave impressed on me the urgency of doing some view-intensive trips before the summer smog season begins in earnest. Melissa’s trip to Manning Park’s Skyline Trail advertised some fantastic views, and this advertising turned out to be widely effective. Saturday morning found 25 VOCers piling out of cars at Lightning Lake Trailhead. 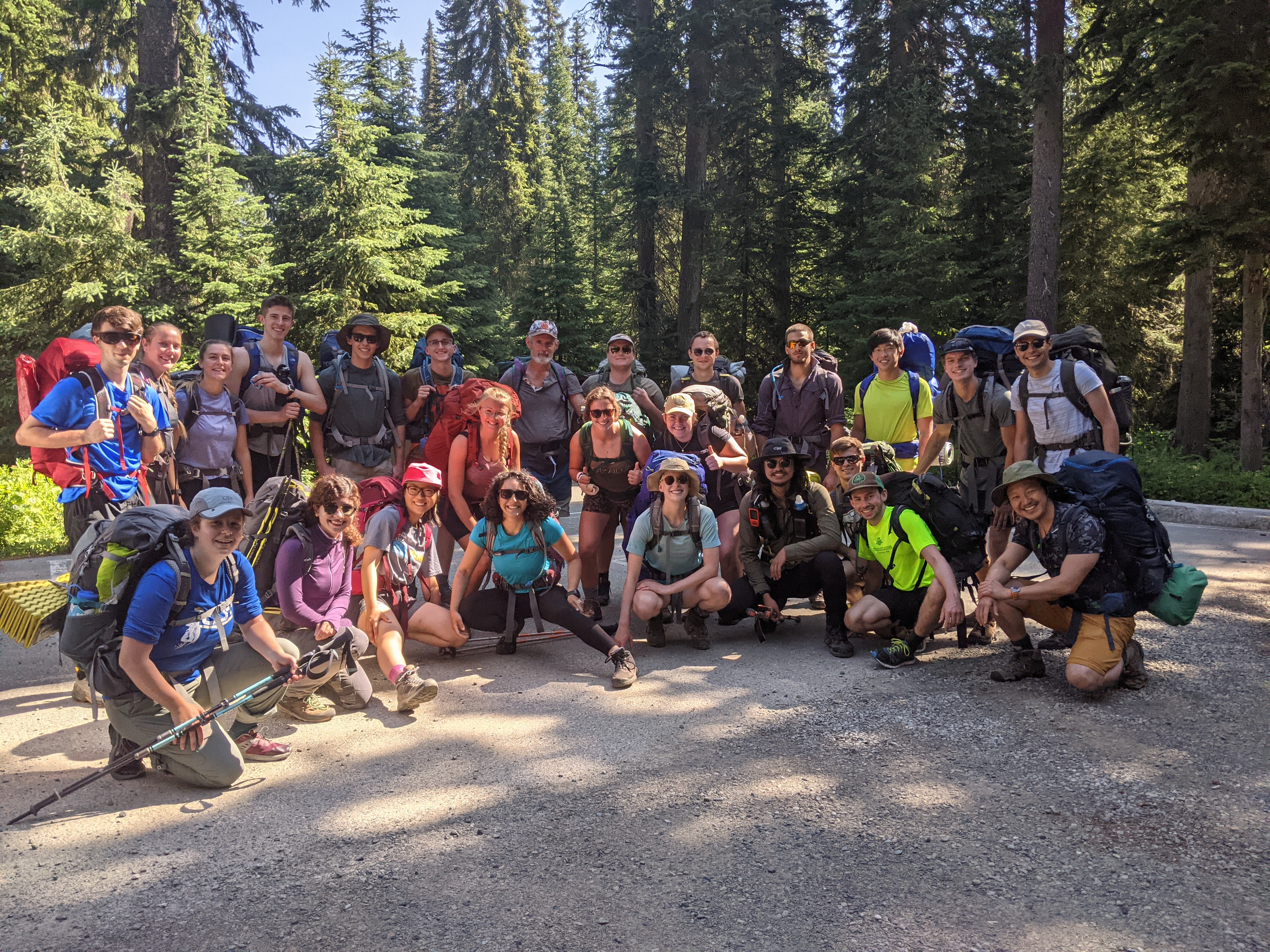 Melissa’s plan was simple: hike the Skyline Trail ~20 km to Mowich Camp, then hike back the next day. From the trailhead, we proceeded up a long, gradual hill into the alpine. The smoothly-graded trail felt like a luxury compared to the endless tree root staircases of the North Shore. Our initially enormous posse of hikers quickly splintered into a few separate groups, and these groups would continue to split, reunite, leapfrog and swap members as the day wore on. 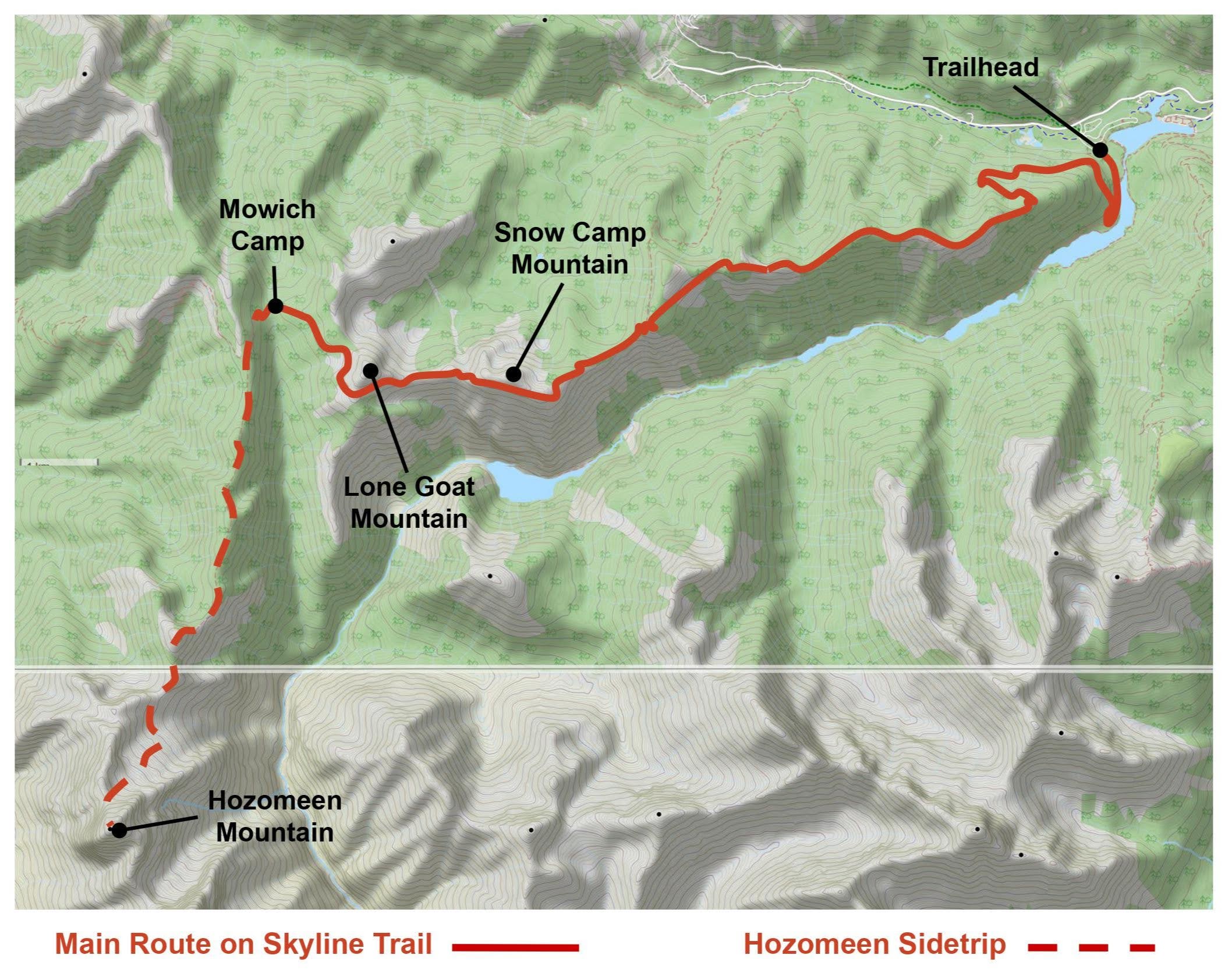 The Skyline trail really is a beautiful place. Once above the treeline, we almost always had 180 or 360 degree views of the surrounding ridges. We walked through lush, grassy meadows full of blooming paintbrush, lupine, tiger lilly, penstemon, valerian, and others I couldn’t name. We could look down steep hillsides to the lakes along lightning creek 700 m below us. 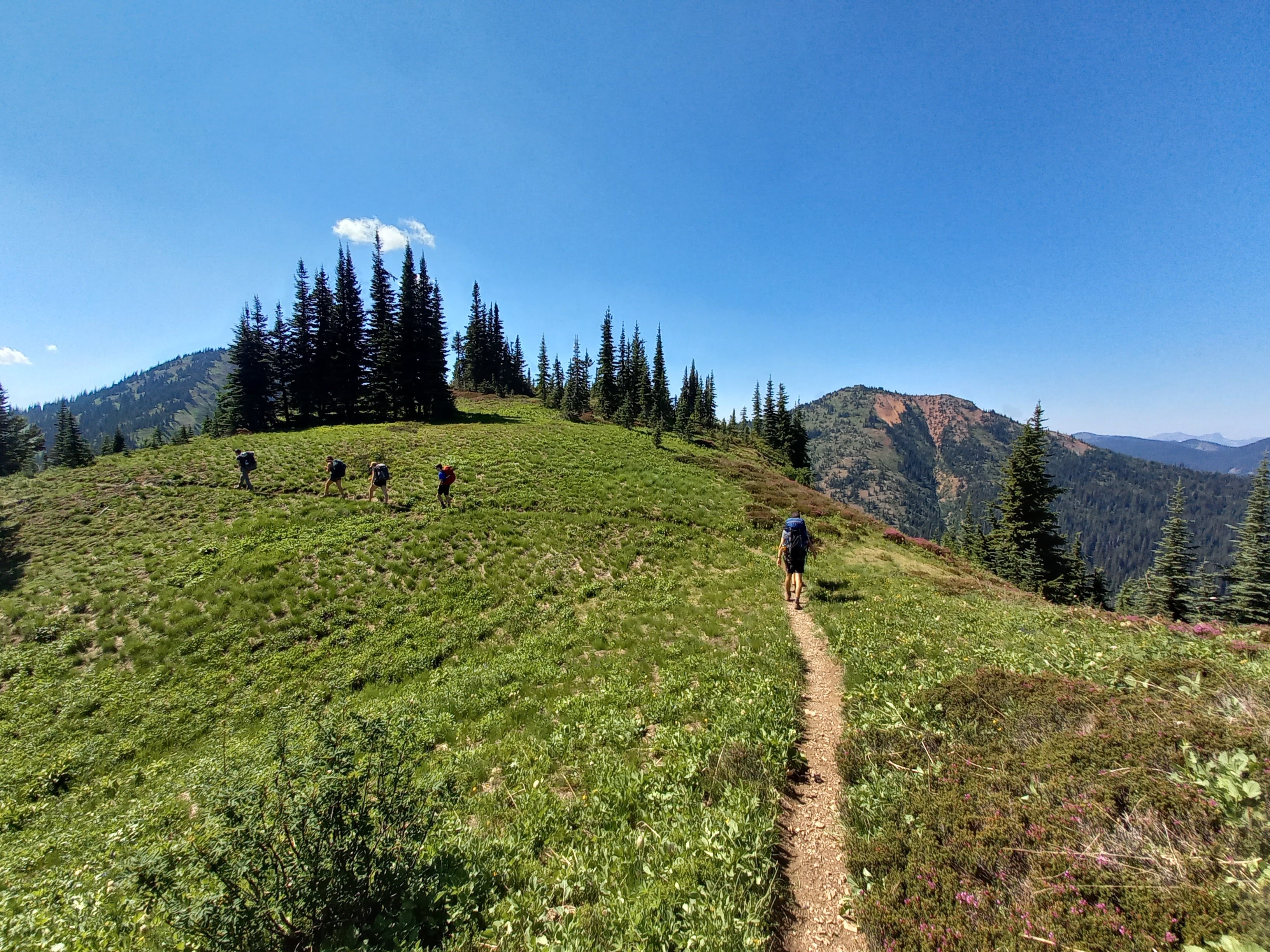 Typical alpine terrain on the Skyline Trail. PC Hassan B. 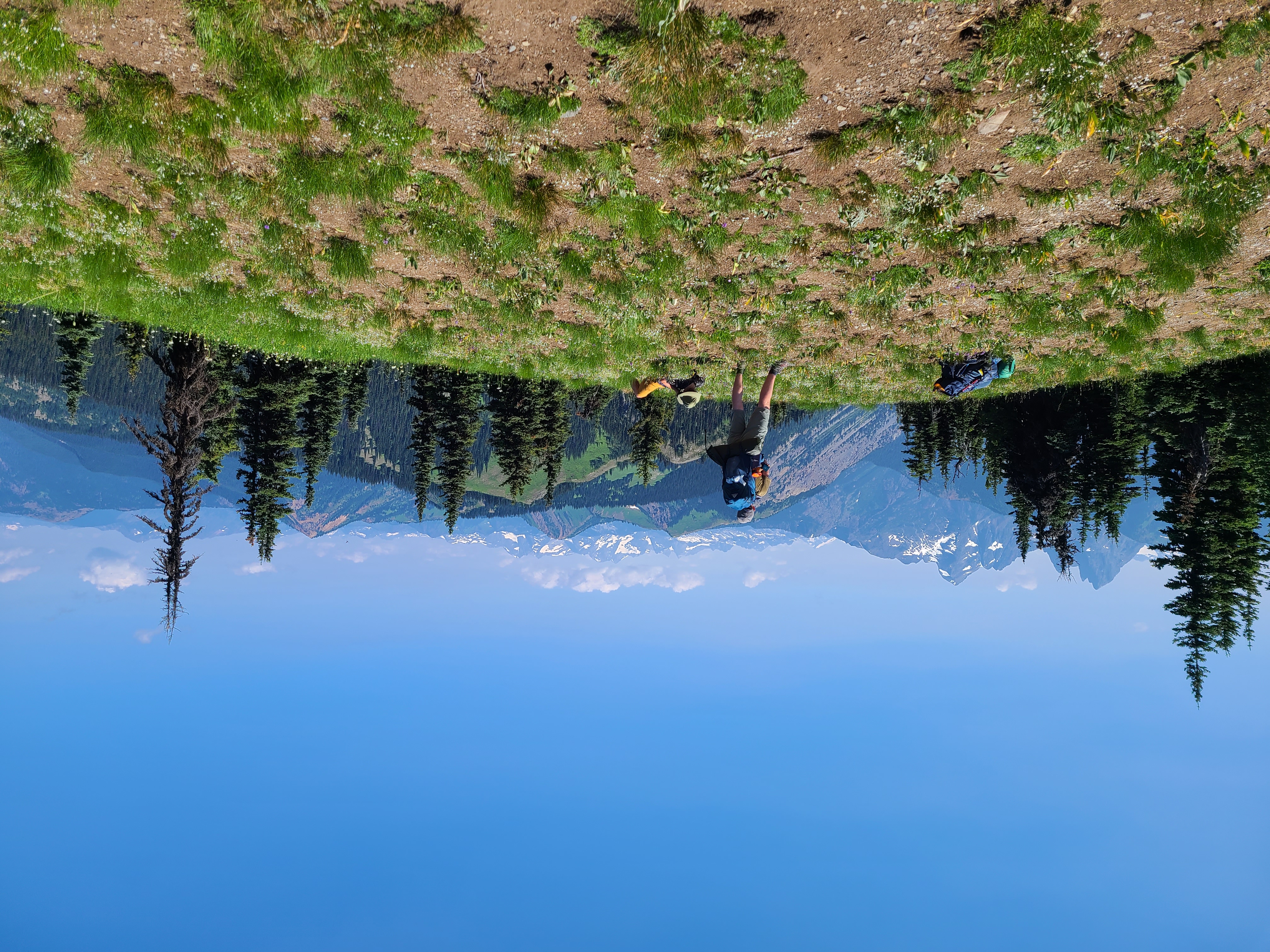 The western half of the Skyline Trial contours around Snow Camp Mountain, followed by Lone Goat Mountain. There are ~200 m trails leading to the top of each mountain, and many of us took these trails to the summits. We did in fact find one unimpressive snowpatch near the top of Snow Camp, but the summit of Lone Goat was disappointingly goat-free. 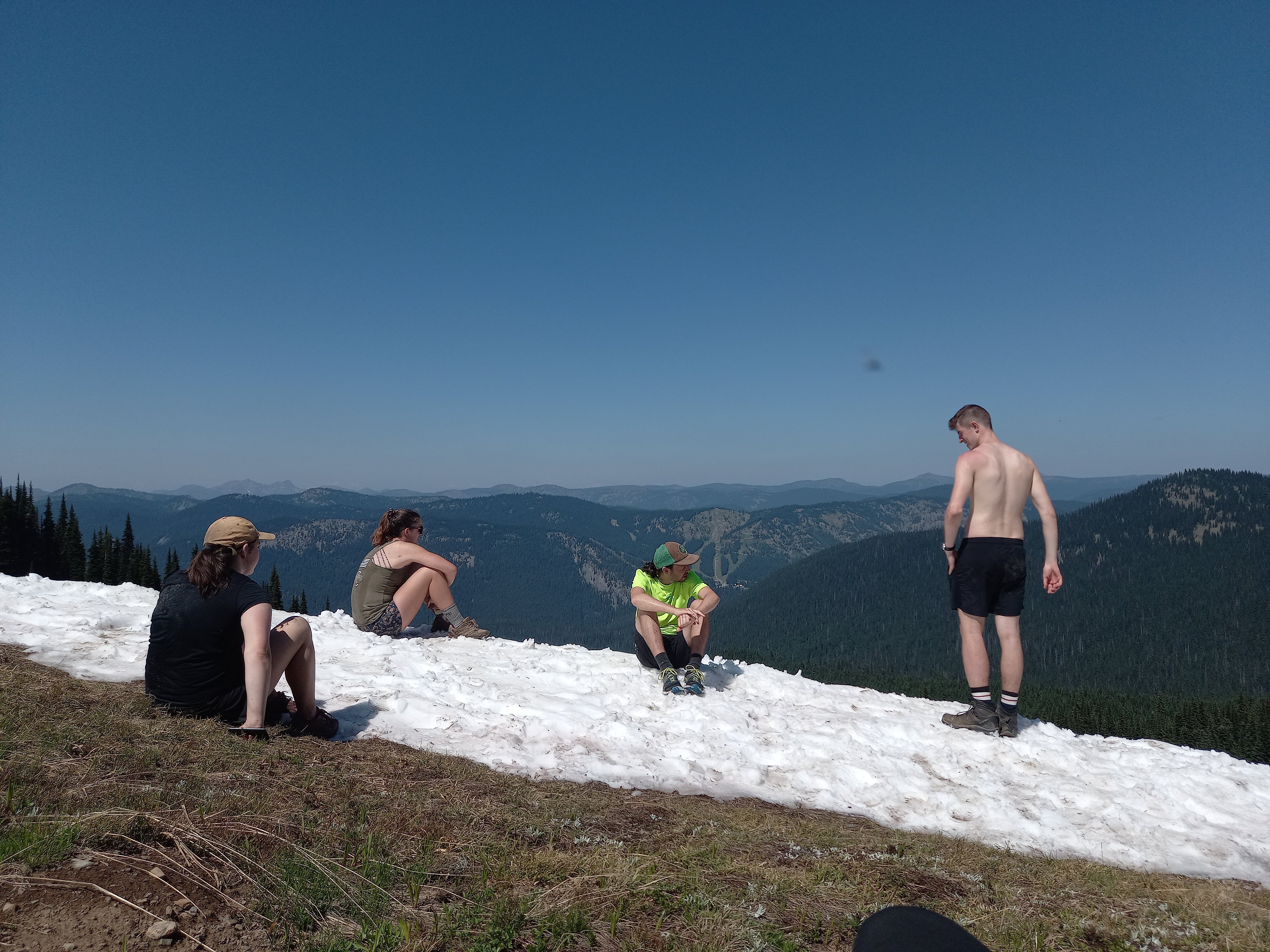 We rolled into Mowich Camp and set up tents in a dense but manageable cloud of mosquitoes and midges. While packing up our tents the next morning, some of the campsite’s other visitors told me that they would describe our arrival as “the worst flashmob in history”. They were clearly annoyed at the size of our crowd, so I apologized profusely and attempted unsuccessfully to give them some food as a peace offering. 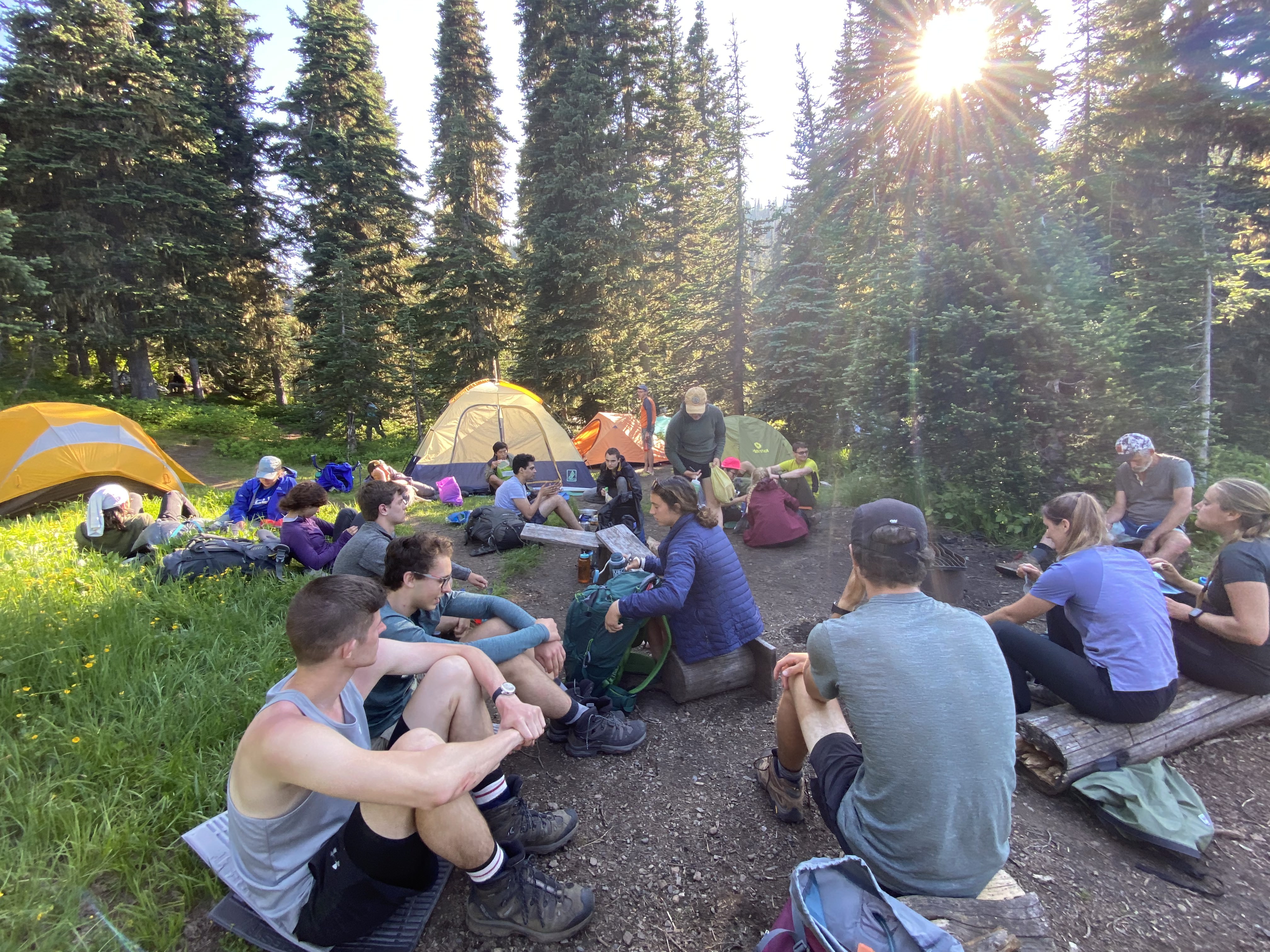 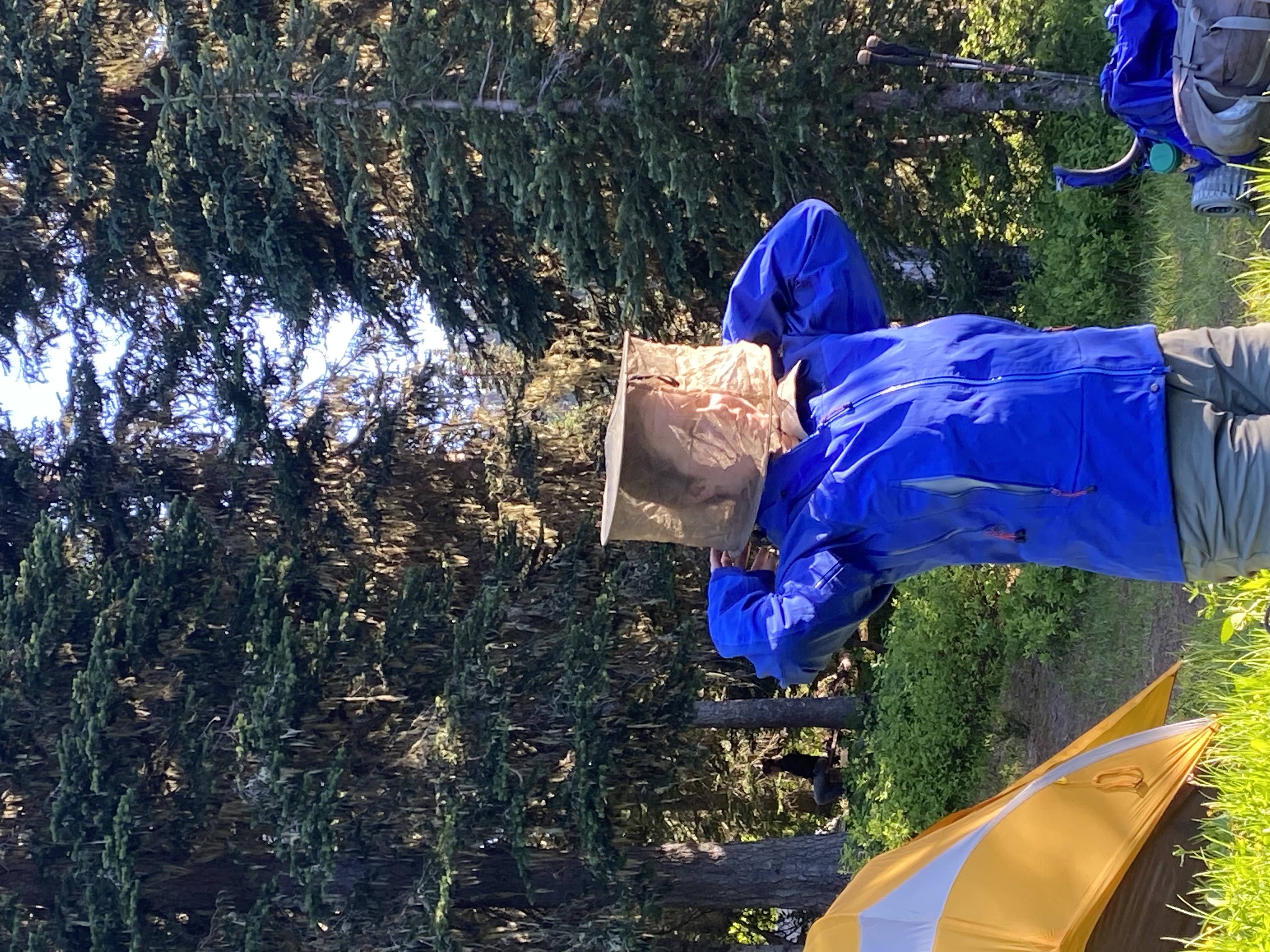 The only fashionable way to repel mosquitoes. PC Settare S.

After dinner, a group of us walked ~200m up to the ridge west of our camp to watch the sunset. The view was inspiring enough that many of us were convinced to get up for sunrise the next morning as well. 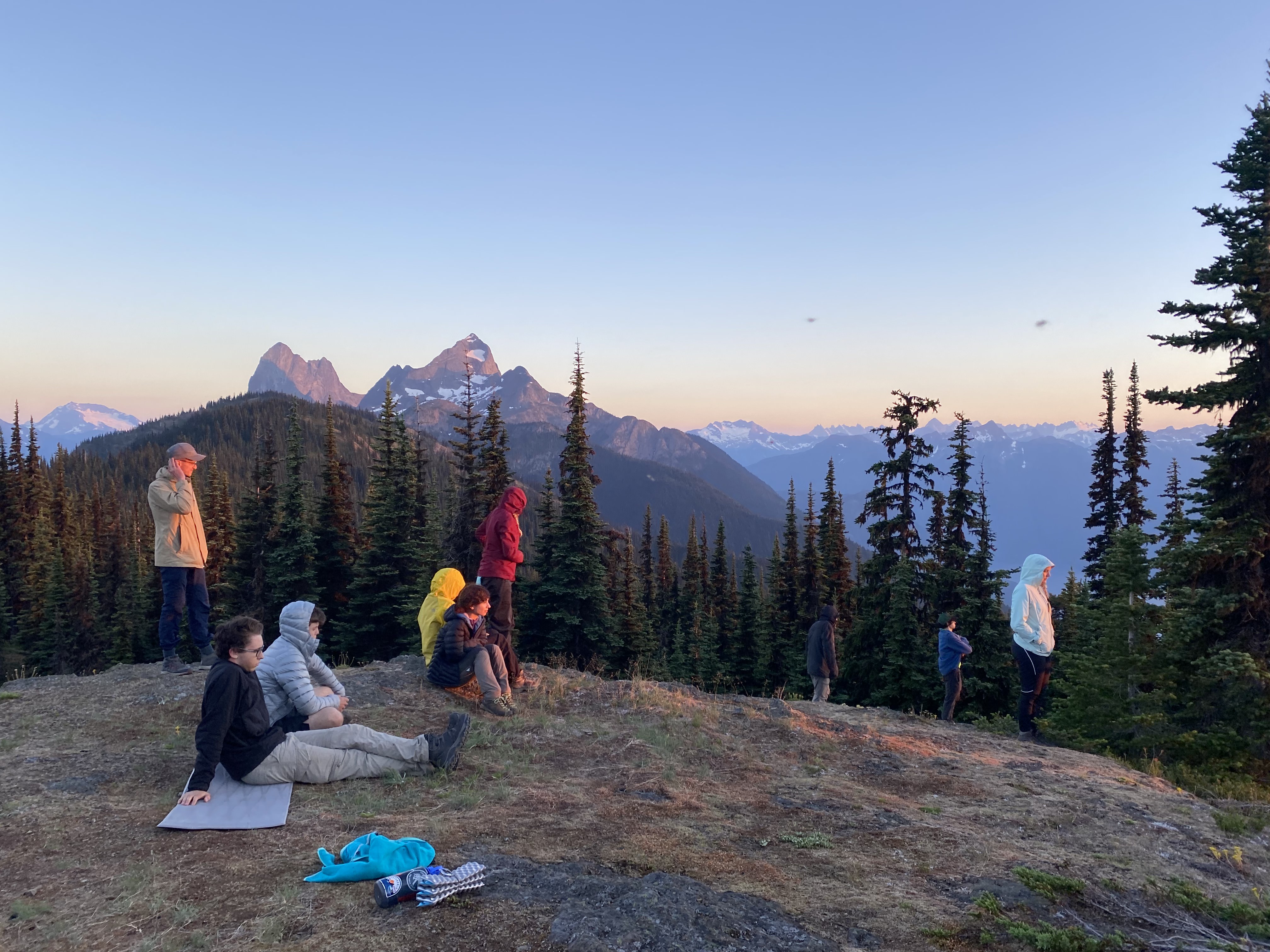 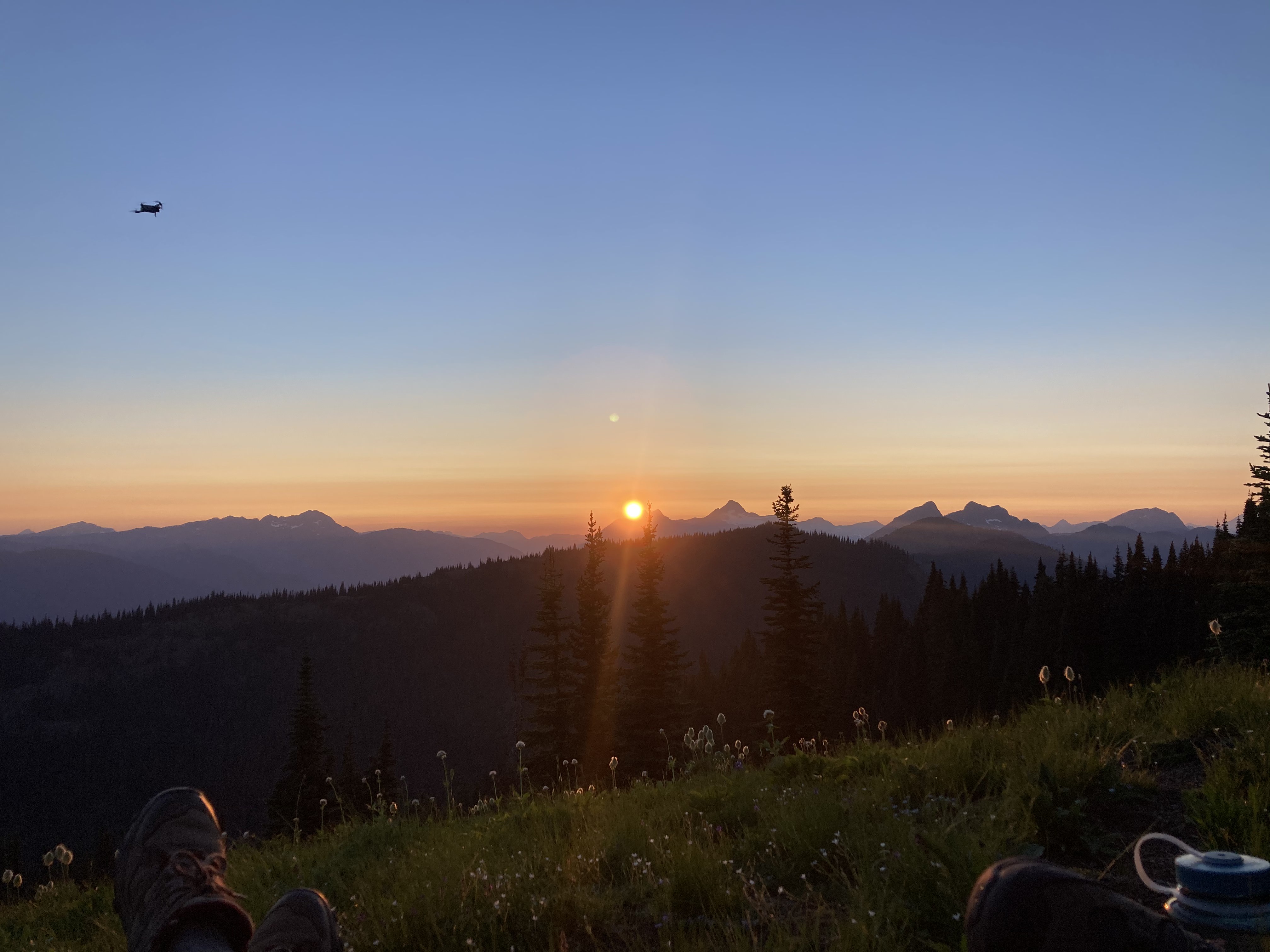 At 4:30 am Sunday morning, two small subgroups of VOCers left camp in search of sunrise views. I was grouped with Taras, Roger, and Hassan, all of whom had agreed on an out-and-back trip to the US border. We hiked south along the bumpy Hozomeen ridge until a particularly prominent bump just before the border. At this point it was 5:45 and we had promised to be back at camp by 9:30. There was still enough time (if I hurried) to make a summit attempt on Hozomeen Mountain.

While Roger, Hassan, and Taras stopped for breakfeast, I hiked/jogged across the border to the lowpoint of the ridge. I followed a couple of cairns leading off the left side of the ridge, and ‘shwhacked horizontally through ~5 min of forest to an open heather meadow. I then ascended ~400 m of heather and slab to the col at the base of the north ridge headwall. Approximate route from the US border to the summit of Hozomeen Mtn. 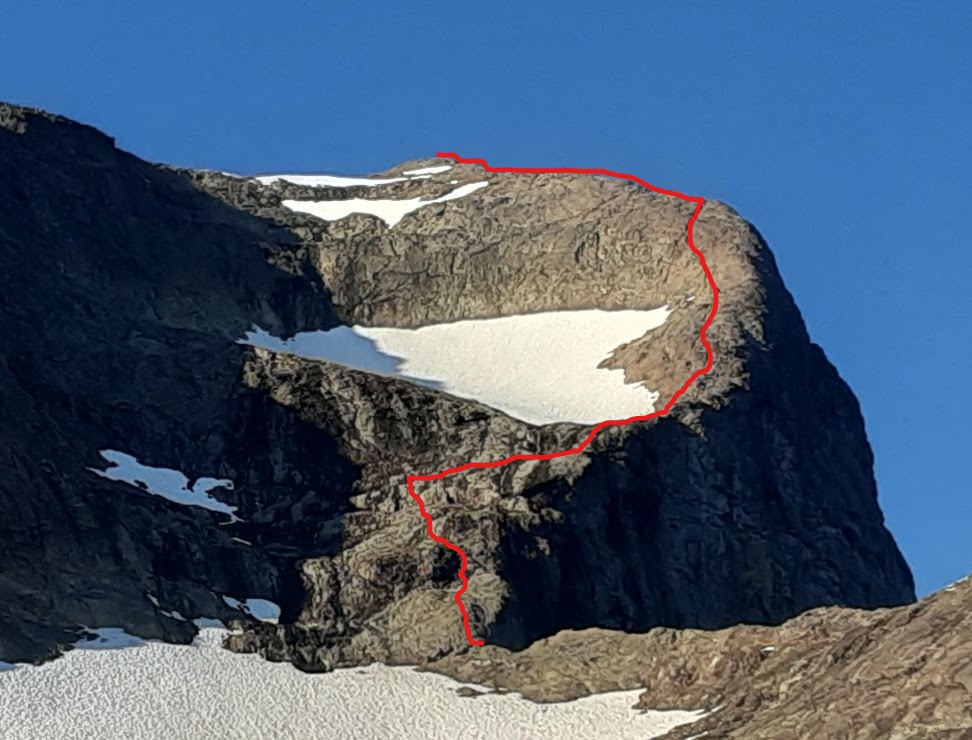 The 250 m scramble up the headwall is class 4. Loose rock and gravel-covered slabs made progress a bit slower. Once I was level with the snowfield in the centre of the face, I found a chimney system which allowed me to ascend the East side of the North ridge to the top of the wall. From there it was a 5 min walk to the top, where views included Ross Lake 2000 m below and Mt Baker on the Southwestern horizon. The summit register had only 6 entries from the past 3 years, which was less than I expected.

I retraced my steps on the way back, except for a few detours to boot-ski on snowfields. I met my three comrades back at the border at 7:45, and we motored the 7 km back to camp. US border monument. PC Hassan B.

The larger part of Sunday was spent with the full group reversing our hike from the day before. The sun was out again, making for awesome views but also a lot of grunting and sweating on the uphills. Most of us were feeling tired compared to the hike in, but we were motivated by the prospect of an afternoon swim in Lightning Lake at the end of the hike.

The lake was the perfect temperature: refreshing but not hypothermia-inducing. I spent the car ride back to Vancouver getting an introductory education in contemporary European music (thanks Taras and Benedict). Special thanks to Melissa for the great trip idea, for keeping track of 26 people + 10 tents + 6 cars, and for letting me add some extra scrambling to the agenda.