Double Whammy in the Joffre Range

I had always thought that the individual awarded the duty of writing the trip report was one who filled either of the following criteria: 1) newest member of the club 2) had never written a trip report before. Alas, my plan to not have to write the report was foiled when both my trip partners unfairly teamed up on me, citing that it was the youngest individual who shall write the report.

As a North Vancouver resident who frequents as a driver for VOC trips, it was a pleasant surprise to be able to pick up both my trip partners from the North Shore. We were on the road by 7:30am and made great time, arriving in Pemberton by 9:30am. We were slightly worried that we might get stuck in traffic due to the Pemberton Music Festival, but there ended up not being as many cars on the road as there were shirtless, flower-wearing festival-goers. We arrived at the trailhead just after 10:00am and were ready to roll.

The Joffre Range is home to many alpine mountains in very close proximity to each other. Some of these mountains include Vantage, Joffre, Matier, Hartzell, Spetch, and Slalok. There is also Keith’s hut, located near the base of the Anniversary Glacier, which makes for great accommodation. The great thing about this area is that it has such easy access. It is highway the entire way from Vancouver to the trailhead, so tiny little 2WD cars with absolutely no clearance (like mine) can easily make the trip.

As we started on the trail up to Keith’s hut, the sun was burning down on us with the heat of a thousand… suns(??). It was incredibly hot this weekend and we hoped it would be much cooler up in the alpine. The first portion of the trail crosses a few creeks and passes through some meadows. Coming through the meadows you get to see views of the Anniversary Glacier and its surrounding mountains. It is quite the pleasant hike. The second portion of the trail turns steeply upwards and promptly takes you to Keith’s Hut. 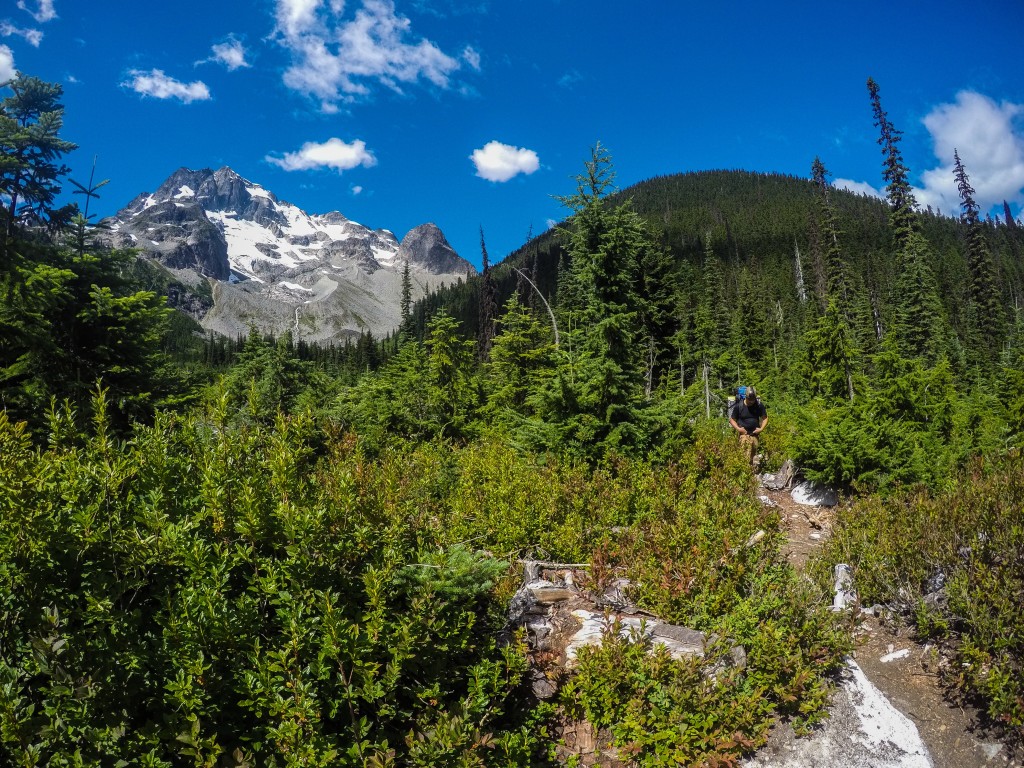 Ben passing through meadows with Joffre Peak in the background 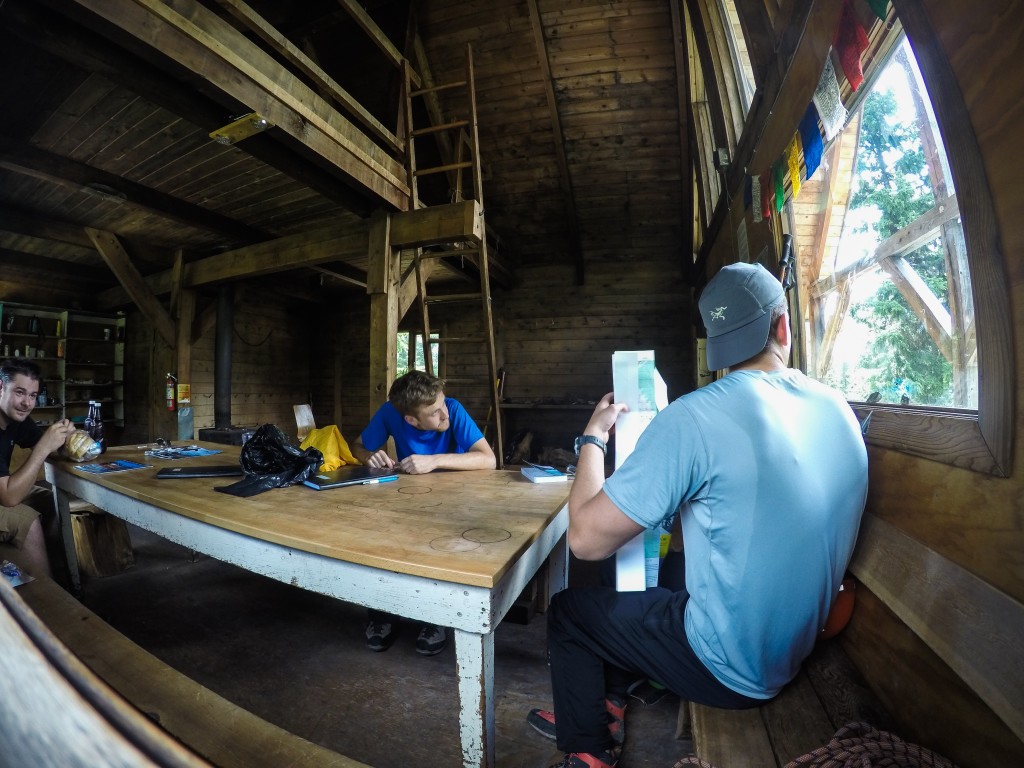 Scoping out our objectives for the weekend from Keith’s Hut

We took a small break at the hut to eat some food and read through the logbooks. It was apparent from the recent entries that a single mouse had been causing havoc for those staying overnight at the hut. The aforementioned mouse then made a surprise entrance as it made its way down the ladder from the upper floor and scurried through a small gap in the hut door. It seemed harmless enough.

We continued on a little higher about an hour further from the hut to a place called Motel 66 (due to it being located at 6600 feet elevation). By this time, it was about 2:00pm. After some discussion, Dave and I decided to go climb Joffre Peak via the fourth class route while Ben chose to explore around the campsite in order to save his energy for the next day. 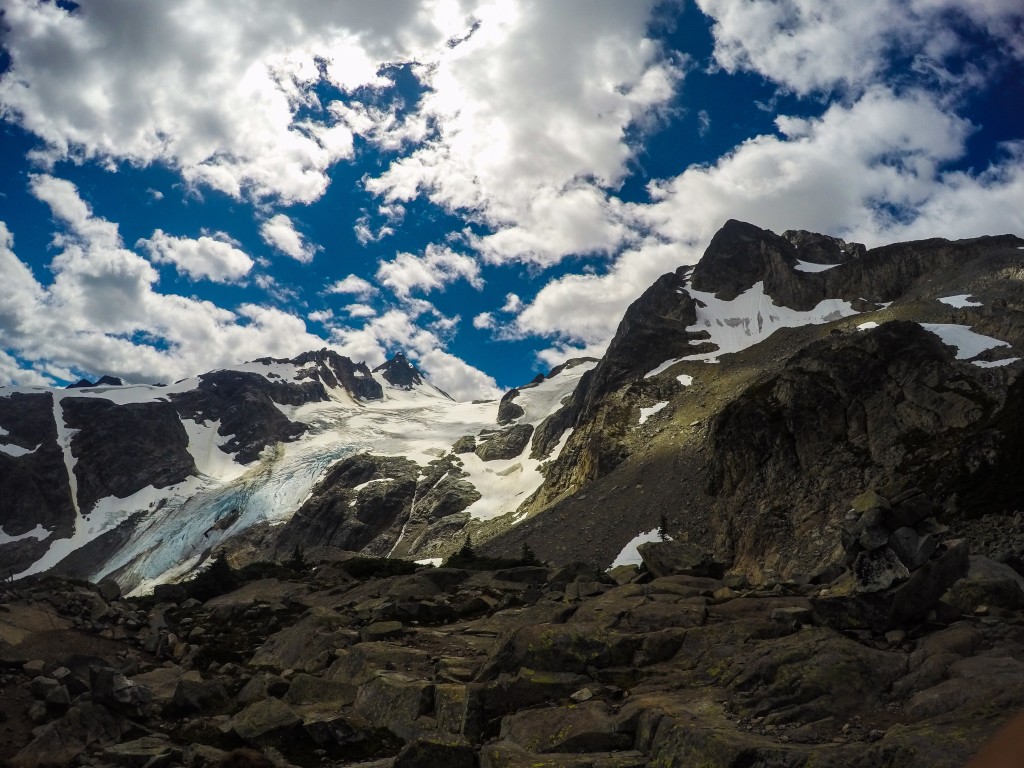 For the first portion of this climb, you can either decide to head up a narrow, steep snow ramp, or you can scramble up the rock beside the snow ramp. We decided to take the route along the rock. This portion involved very loose rock that required careful foot placements. Once at the top of the snow ramp, the rock quality gets much better. Route finding seemed to be the most difficult aspect of this climb. We scrambled along exposed ledges and through small chimneys that lead up to the east summit. A short ridge scramble later and we were on the true summit. 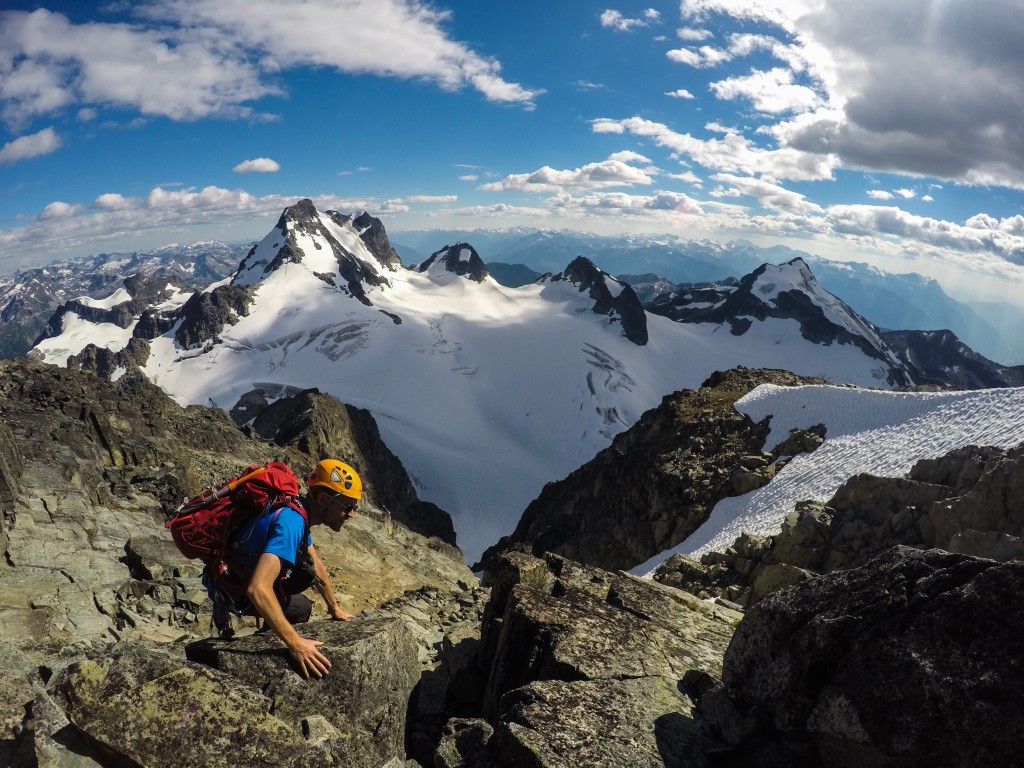 Dave scrambling near the top of Joffre Peak 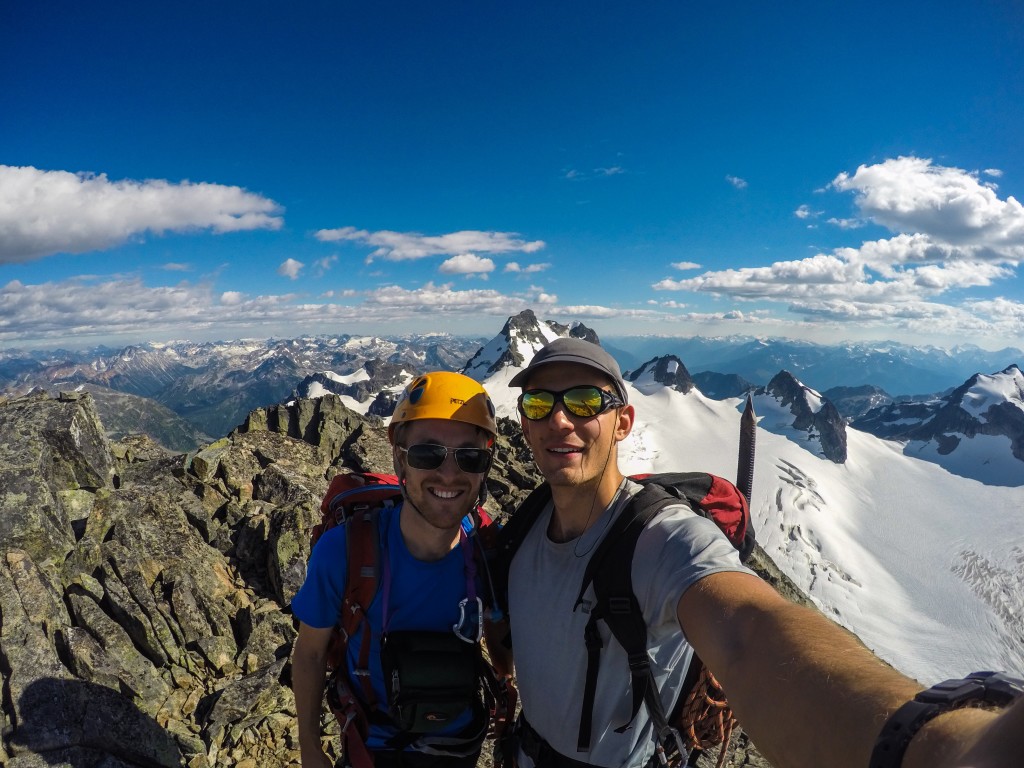 Summit selfie from atop Joffre Peak

After enjoying the views from up top, we made our way down and back to camp by 8:00pm. Dinner tasted especially good that night.

The next morning, we woke up at 5:00am in order to get a 6:00am start on the glacier. Our goal for today was the northeast spur route on Mount Matier. The glacier was in great condition for crossing. Some crevasses were still hidden under the snow, but the snow bridges seemed solid enough. We didn’t even need to put crampons on, as Dave showcased his excellent step-kicking skills. I now dub thee Dave “Step Master 9000” Manning. 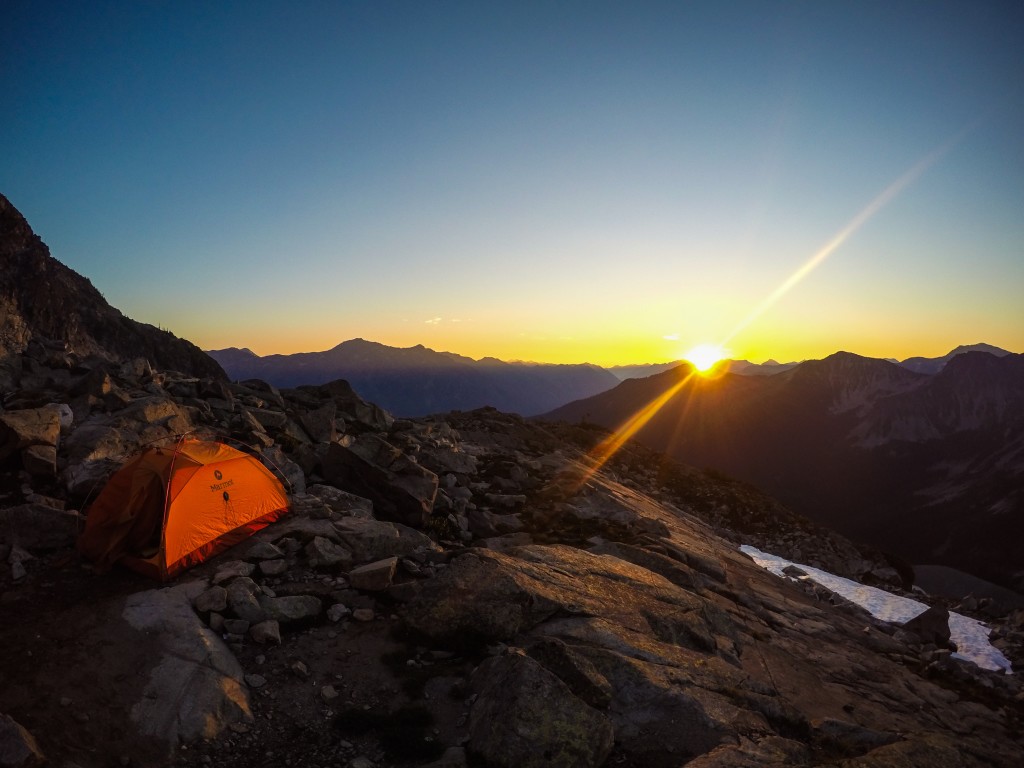 Sunrise from our camp spot

From the Matier-Joffre col, the base of the climb is only a few minutes away. Here we met up with a group of four from Montreal. They were going up the same route as us. We later found out that two of their members (possibly three, I can’t entirely remember) had never been on a glacier before. The leader of that group must have been quite confident. 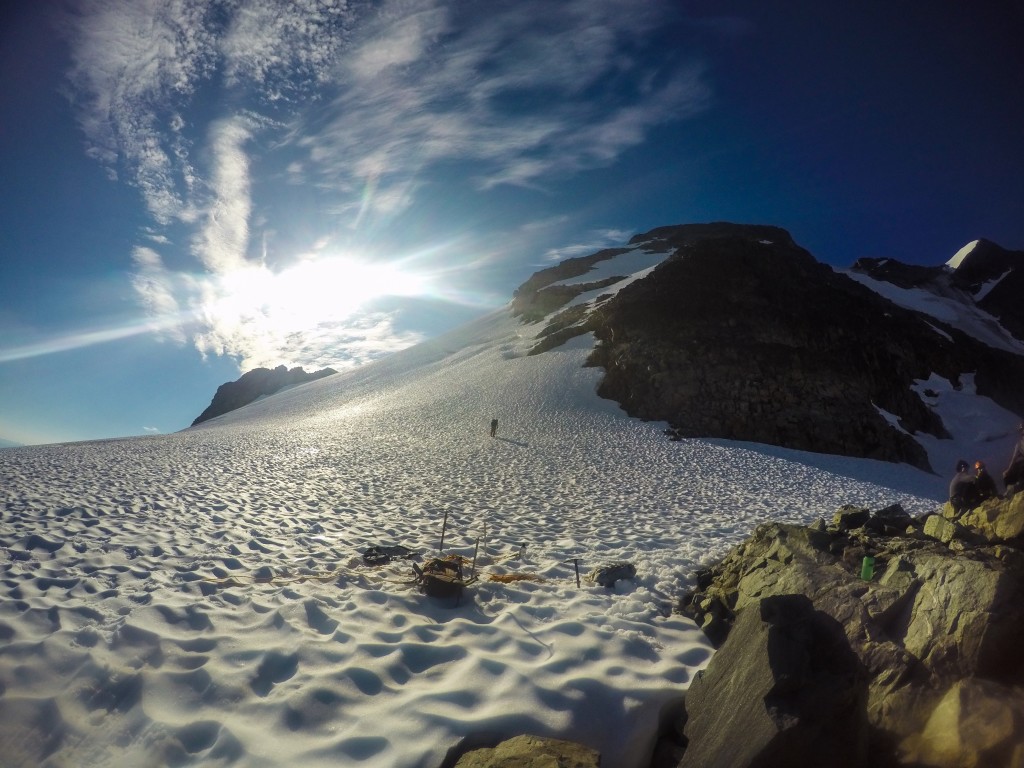 Ben getting a head start up Matier

This route up Matier passed over some very loose rock, then up a steep snow slope onto a rocky ridge. We left our rope at the base of the climb as the snow was quite soft and would not have been very reliable for placing protection. Self-arresting was also quite hard to perform as our ice axes were not biti ng very well in to the soft snow.

Once on the loose rock, Ben made a decision to turn back as he did not feel comfortable with the rock slipping from under his feet. I applaud the decision he made, because once you start pushing outside of your comfort zone, there seems to be a higher chance that something will go wrong. Dave and I watched to make sure Ben safely down climbed, and then continued upwards. Dave proceeded to solidify the meaning behind his Step Master 9000 name as he kicked immaculate steps in to the steep snow slope. The Montreal group behind us were surely grateful.

Once on the ridge, we were a short walk from the summit. The rocky ridge was simple and straight forward. The views from atop Matier were fantastic as you could see far in all directions. We took our time down climbing the snow slope, and then quickly got off the glacier before the sun started to heat up the snow bridges too much. 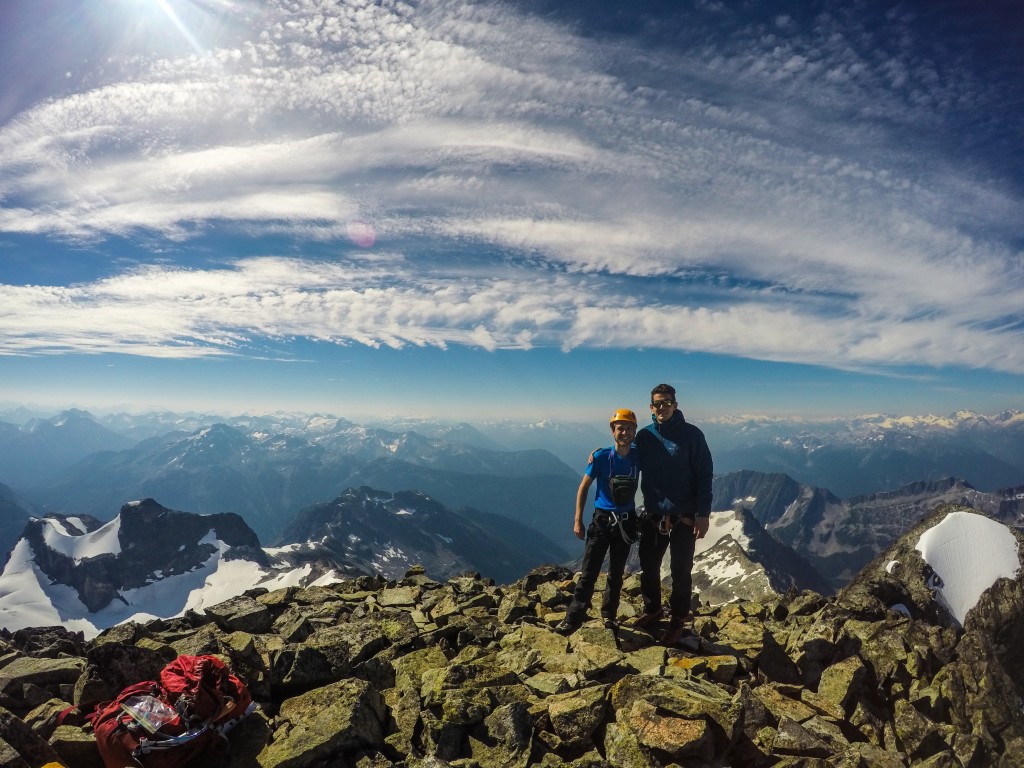 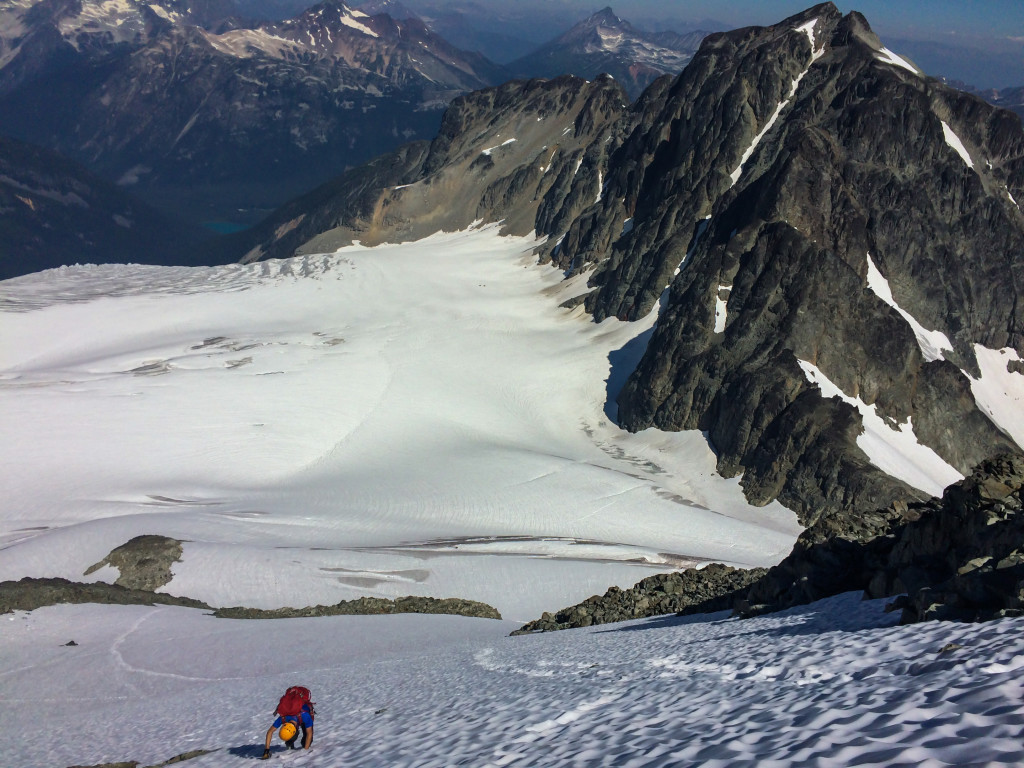 Dave down climbing with Joffre in the background.

We packed up and quickly made our way back to the car. Everyone seemed quite happy with how the weekend went. We were back on the north shore by 7:00pm just in time for dinner. Thanks Dave and Ben for coming along! I sure had a fantastic time.

You can find more photos here. 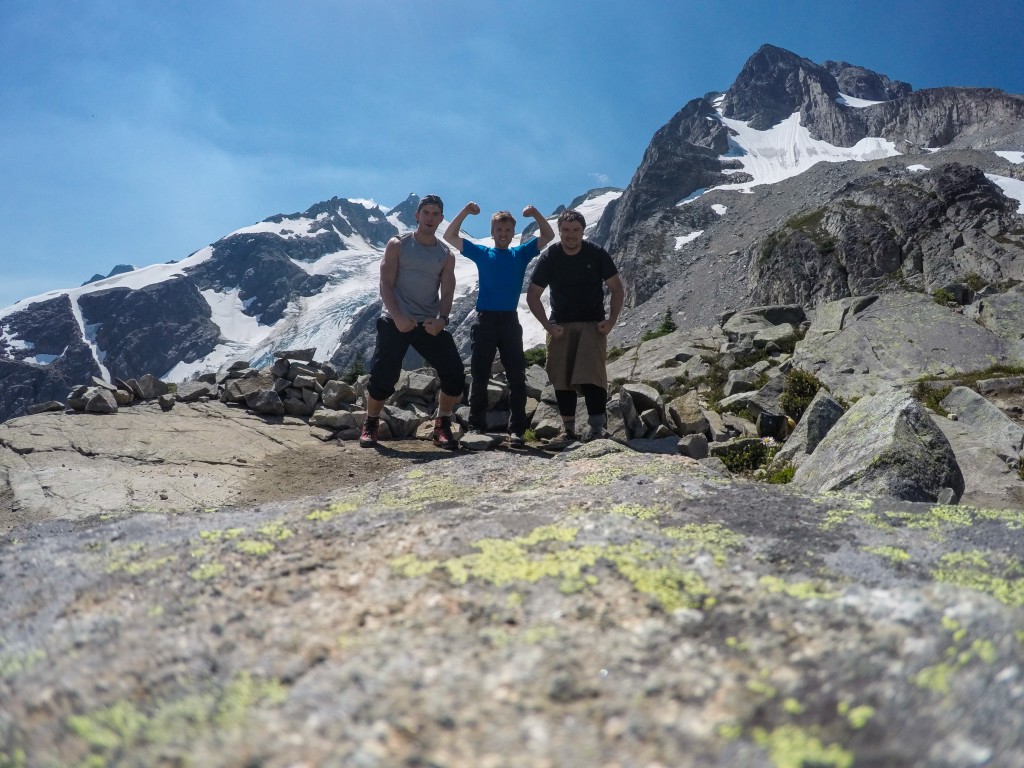 Thanks for a great weekend guys!