Norvan Falls (and so do we)

It was a wet and dreary morning, just what one would expect when hiking in Vancouver.

The crew consisting of Lucy, Diego, and myself decided to get a moderately-early start, and be at the trailhead for 8am. The plan was to hike to Norvan Falls, followed by Coliseum, overall a pretty decent 10 hour hike.

We opted to park 30 minutes away, because free parking, am I right? The added distance was definitely worth it.

Arriving at Lynn Headquarters relatively on schedule, we began our trek to the Norvan Falls trail. It started off pretty flat and easy, following the river to the left. 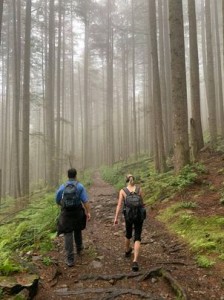 The fog added a much needed spooky aesthetic to an otherwise cheery walk in the woods.

We enjoyed our nice flat hike through Lynn Canyon and made it to Norvan Falls incident-free. We opted to admire the falls from a distance, as it was definitely a little cold for a swim (or so we think). We walked and wandered along the river for a bit, which gave me plenty of time to admire how squishy the ground was. If you’re wondering, it was quite squishy. 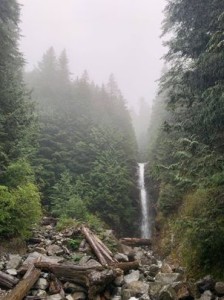 It was a very nice waterfall

Of course, it wasn’t too long before we decided to attempt a river crossing. It looked simple enough at first glance, but you know what they say, looks can be deceiving.

The talented Lucy made it across by hopping rocks without incident. Next was me, and I opted to take one shoe off to avoid the jump that may have been slightly too long for my little legs and slippery running shoes. Diego decided to go all in, taking off his boots and fording across. 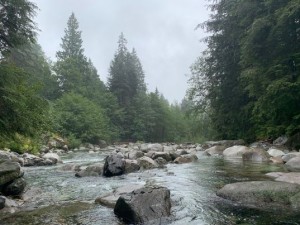 “A towel, is about the most massively useful thing an interstellar hitchhiker can have. Partly it has great practical value.” – Douglas Adams

Not wanting to risk slipping on the rocks, I took my other shoe off so I could walk across. Being too lazy to simply carry my shoes, I had the genius idea to throw them across the river. Well, let’s just say it’s been a while since I’ve practiced my throwing skills…

Next thing I know, my shoe and sock are floating away down the river. Not wanting to lose my shoe, I attempted to speed walk through the water and retrieve it before it was gone for good. Two wipeouts and a lot of colourful language later, I was soaking wet on the other side of the river with my shoe.

I would also like to note that I was not the only one that thought of throwing things across the river. Tip to future hikers: clothes do not like to be thrown.

I’m not exactly sure what happened to the other two during the crossing, but Diego emerged half-soaked and Lucy definitely got one leg wet. All in all, an eventful crossing. Luckily, nothing important was lost, just one sock and our sense of dignity. 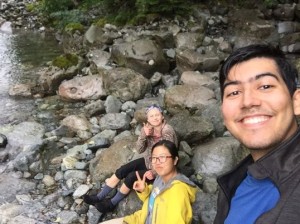 We ate our lunch by the river. It was delicious, if only a little soggy around the edges.

We continued our trek, and we arrived at the Coliseum turn off. Though we did contemplate turning around, given the eventful and rather long detour earlier, in the everlasting spirit of the outdoors, we began our ascent with high hopes.

Coliseum mountain, let it be said, is a tough cookie. It made it all the more fun to press on, though. After the initial grueling climb, it slowly got more scrambly, numerous tree root sections making for some welcome variety.

Unfortunately, we would not summit today. Though the fresh air can be intoxicating at times, and it may be hard to turn back, sometimes it can be prudent to reevaluate the situation. In this case being a sore foot and two and a half slightly damp people.

I wish I could say the descent was uneventful, but let’s just say we got our hands dirty. Once back on the Norvan trail, the hike back was short work, besides the fact that it was very long. Nonetheless, we made it in one piece, and what’s more, had mostly dried off by then.

Overall, not a bad trip, just a very wet one. We learned a lot, such as various forms of how not to cross a river. And although we didn’t get those nice mountaintop views, perhaps the real treasure was the friends we made along the way.

Thanks to Lucy for organizing this trip, and shout out to Diego for adding a splash of accidental comedy to this trip.

One Response to Norvan Falls (and so do we)