Since our bike touring trips earlier this summer, Youtube’s algorithm has bombarded me with bikepacking videos. A common theme of discussion often comes up: What is bikepacking? This led me to ask even more questions: What is the difference between bikepacking and bike touring? Do you have to go off-road for it to count as bikepacking? Can I just take my panniers, or do I need those fancy seat packs? So, I set out to find answers.

After browsing bikepacking.com to find a “certified” bikepacking trip, I settled on the Englishman River Overnighter. The route is described as follows:

“The Englishman River Overnighter is a 32-mile out and back from Parksville, British Columbia, to Englishman River Falls Provincial Park. Situated on unceded K’ómoks First Nation lands, the route takes you from the Strait of Georgia towards the Beaufort Range—following a mix of multi-use pathways and rooty singletrack through lush rainforests and vibrant estuaries for an incredibly rewarding adventure.”

Joining me on this adventure was Vincent, Fernando, Paul, Luke, Henry, Issac, and Jake. Some of us have been bike camping before, but not off-road, while others have biked trails but not camped, so really this was a first bikepacking trip for all of us.

The morning started moist and cloudy, typical Vancouver weather. One by one, we arrived at the south end of Burrard Bridge, slightly later than the planned 8am start. Everyone brought all kinds of bikes and packs. Some had panniers, some had strapped bags onto their bikes. There were hardtails, gravel, hybrids, and even a road bike. But most shockingly, Jake pulled up with just a backpack and his full-suspension mountain bike—something we all doubted would be comfortable for the +100km journey. 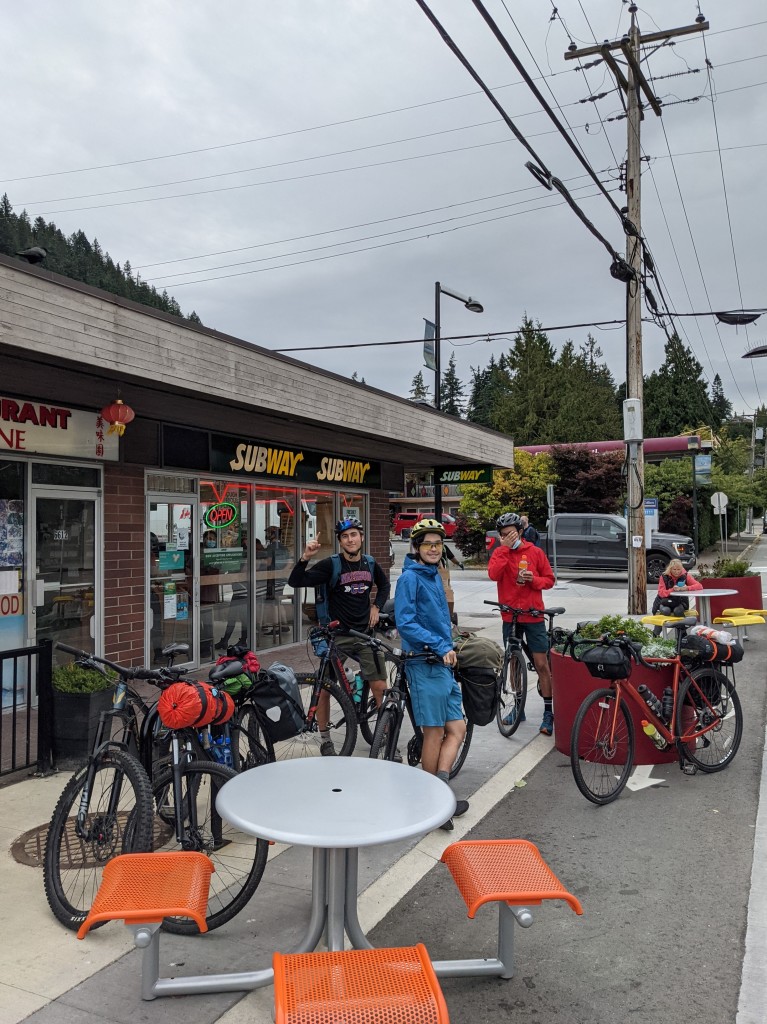 Protip: Subway is cheaper than food on the ferry

Arriving at Stanley Park, we found the whole park fenced off due to coyotes attacks. This meant we couldn’t get to the underpass crossing the causeway, so the next logical decision was to bike to Breka on Robson for bagels and coffee. From there, we slowly made our way across the Lions Gate Bridge and toward the Horseshoe Bay ferry terminal. On Marine Drive, we came across many fellow cyclists with loaded bikes. I began to notice one group in particular, who kept leapfrogging us. When we arrived at Departure Bay, Nanaimo, the rain began to pour. It was too late to turn back now. Leaving the terminal, we were immediately faced with the largest hill of the day. But everyone was able to get over it quickly, promising a great journey ahead. We then got onto the Parkway Trail, a multi-use trail that runs along the Parkway Highway from Nanaimo to Lantzville. With tree coverage, bendy curves, and a slight decline, this quickly became the best parts of the ride so far. Forgetting about the rain, everyone had a blast going full speed down the one-lane trails. Jake used the opportunity to flex his bunny hops over the bumps. In retrospect, we were probably only okay because no one was out in the rain. If any other bikes had been coming from the opposite direction, a pile-up was almost guaranteed. 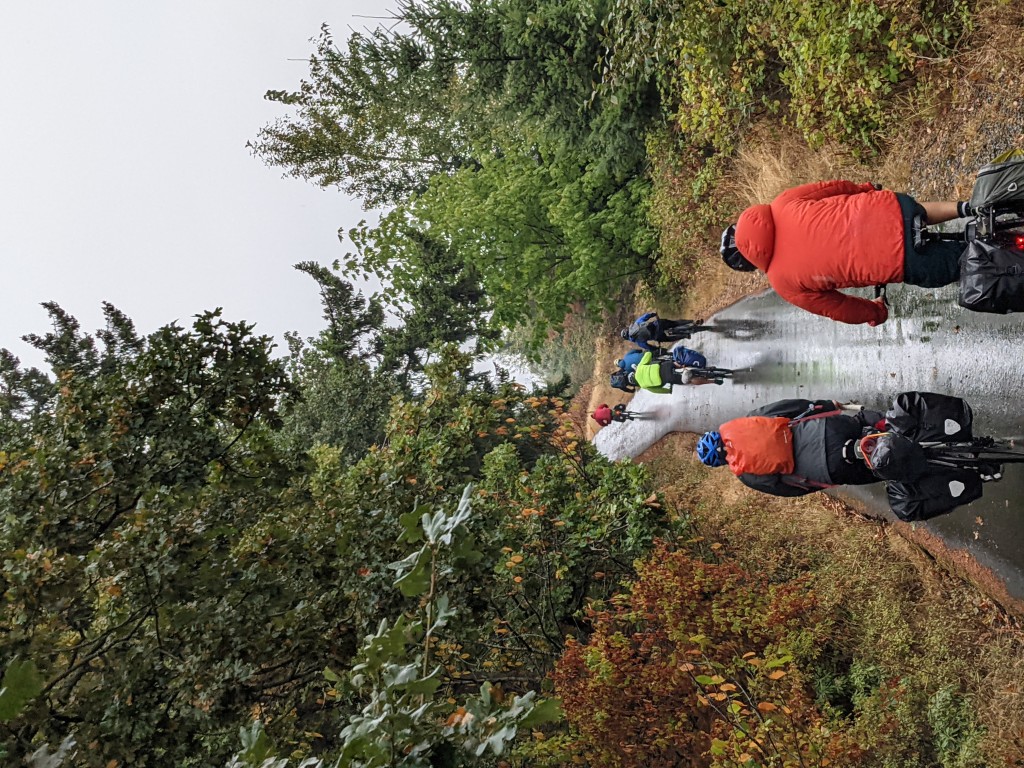 Unfortunately, all good things must come to an end. The beautiful trail spat us out onto the Island Highway. This 5km section was the only road connecting Lantzville to Parksville, so we didn’t have a choice. Despite the wet and low-visibility conditions, drivers had zero chill, most going above the speed limit, according to the speed radar display. The highway shoulder was so narrow, I felt like we were just inches away from death with each car passing. I have no idea why Google Maps indicates it’s a bicycle-friendly road. Riding on a clear day with high visibility jackets and lights may make you feel marginally safer. 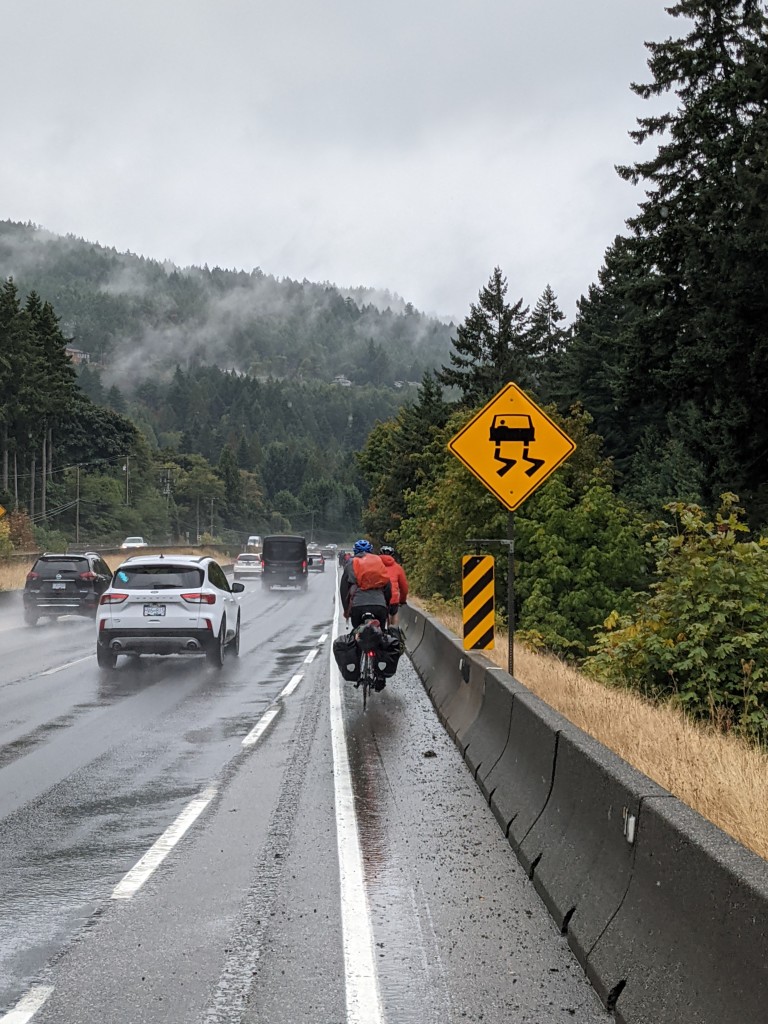 Approaching Parksville, Fernando got a call from the local RCMP. Turns out somewhere along the way, his phone butt-dialed 911 and the dispatcher thought they heard a scream. We gave them our information and were soon back on our way. We assumed the sound may have been from our loud and wet brakes. In the city of Parksville, Issac came up with the brilliant idea to go to a laundromat and dry up our wet clothes. On the way, we found the Mount Arrowsmith Brewing Company. After a few cold beers and some hot pizza, we completely forgot about going to the laundromat and the rain. After all, a VOC bike trip can’t be complete without a visit to the local brewery. 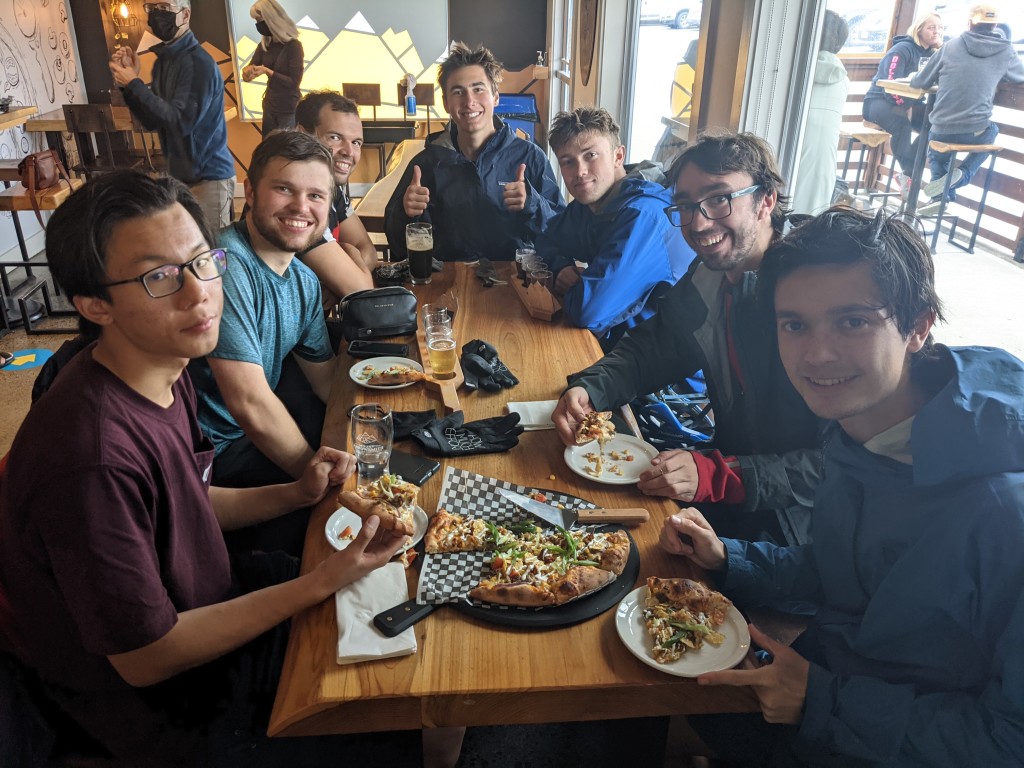 Protip: Beer and pizza can boost morale by 100%

As the clock hit 5pm, we headed out again for the last 15km, thinking we could get to the campground before dark, oblivious about what was to come. With their skinny tires, Vincent and Paul split off to take the road, while the rest of us searched for the trail. Following Komoot, we biked 2km down Martindale Road. At the end of the road, all we could find were private properties, fences, and “No trespassing” signs. We double-checked with various other maps: AllTrails, Gaia, Strava, and RideWithGPS, and all indicated that there was a trail there. Confused, we walked around to look for this mysterious trail. Then an unhappy landowner confronted us. “There are no trails here,” he said. “And I’m fed up with people coming here. Turn around.” So we turned around. 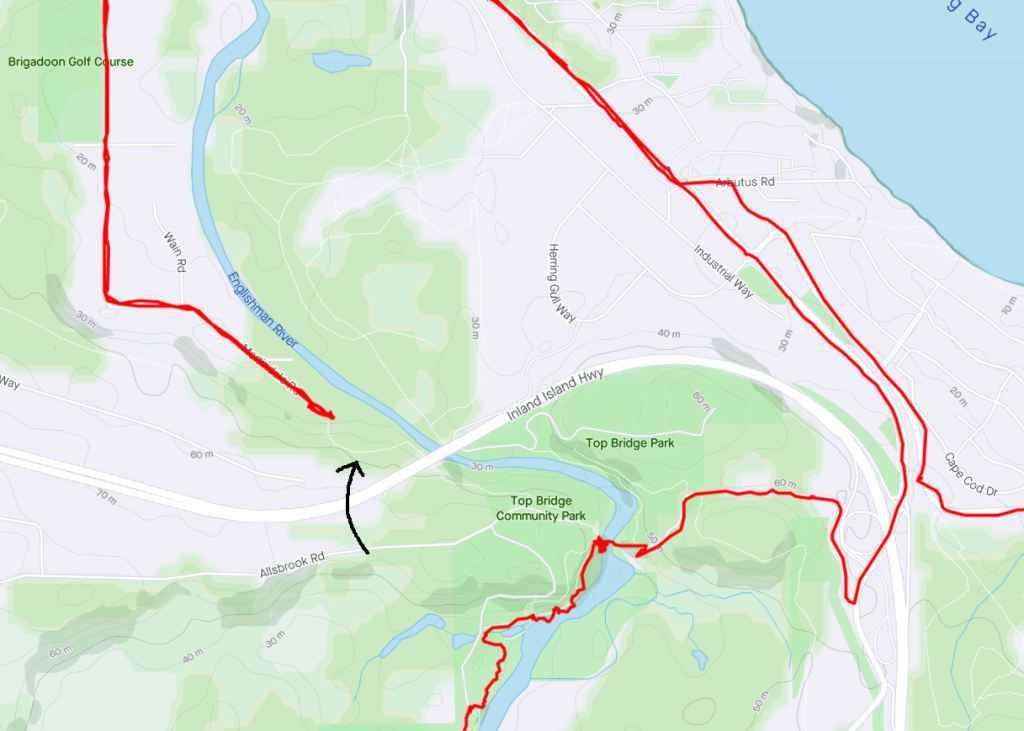 Protip: This trail does not exist

After a 7km detour, we finally found the trailhead at Top Bridge Regional Park. Excited to shred some trails, Jake sped across the suspension bridge, onto the rocks, almost falling into the river. Happy that we’d finally made it to what we came for, we stopped for a scenic break. Seeing an overhanging rock, Jake said “This was built for cliff jumping.” Even though no one built the rocks, all the signs said no diving, and everyone was telling him not to, he jumped in anyway—and lived. I guess my risk tolerance is too low. 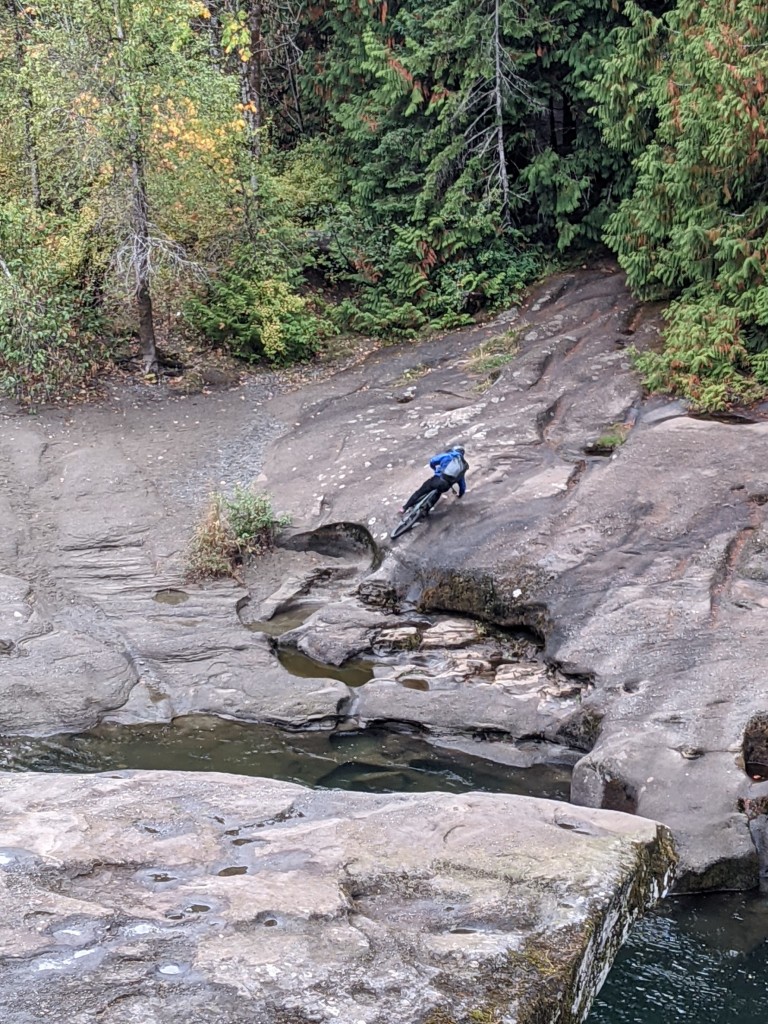 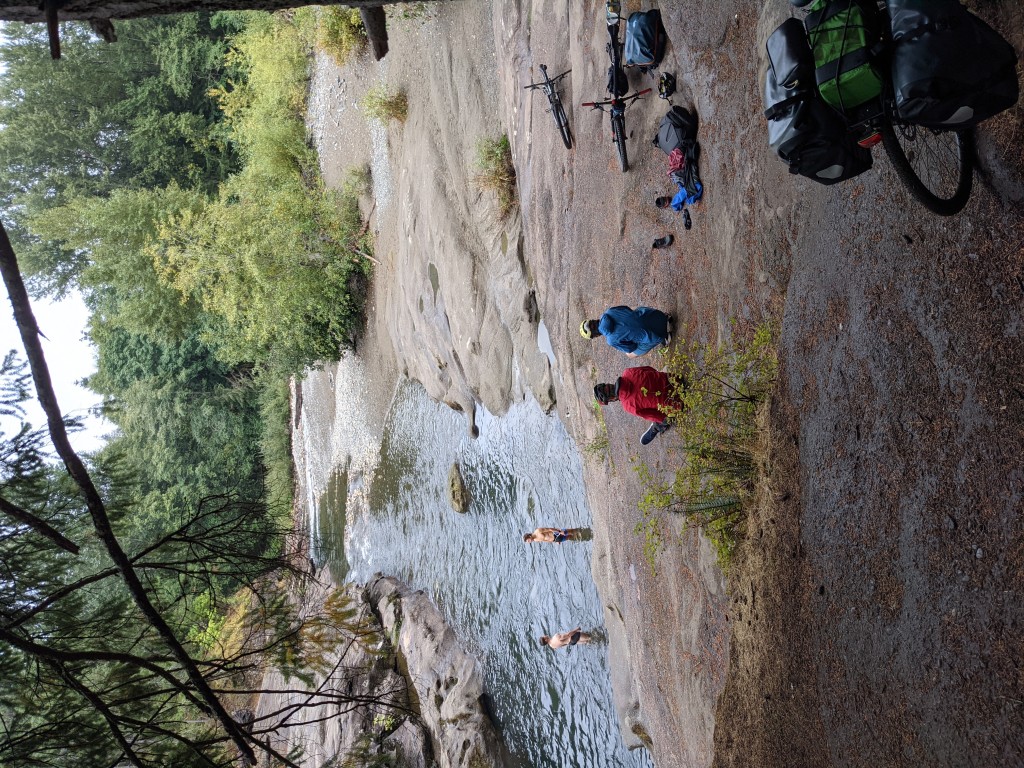 Protip: Top Bridge Regional Park is a great spot for a snack break or a quick swim 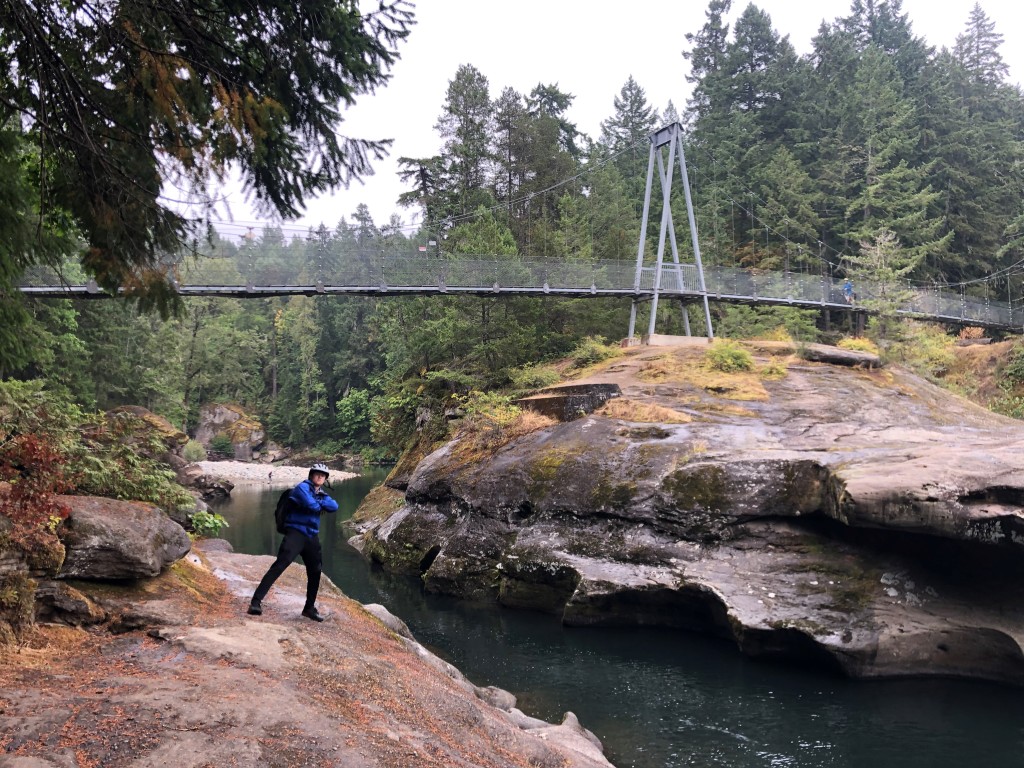 From the gravel service road, the trail turned into single tracks, and we quickly got bogged down. Being the only two with mountain-biking experience, Jake and Issac were shredding while the rest of us hiked-a-bike through the rocks and fallen trees. The panniers became bulky and back heavy, making it difficult to push over obstacles. I now understand why bikepackers favour bikepacking bags over panniers. Going over each root, I made another mental note to not bring a gravel bike to a mountain biking trail. People on the internet make it look so easy. 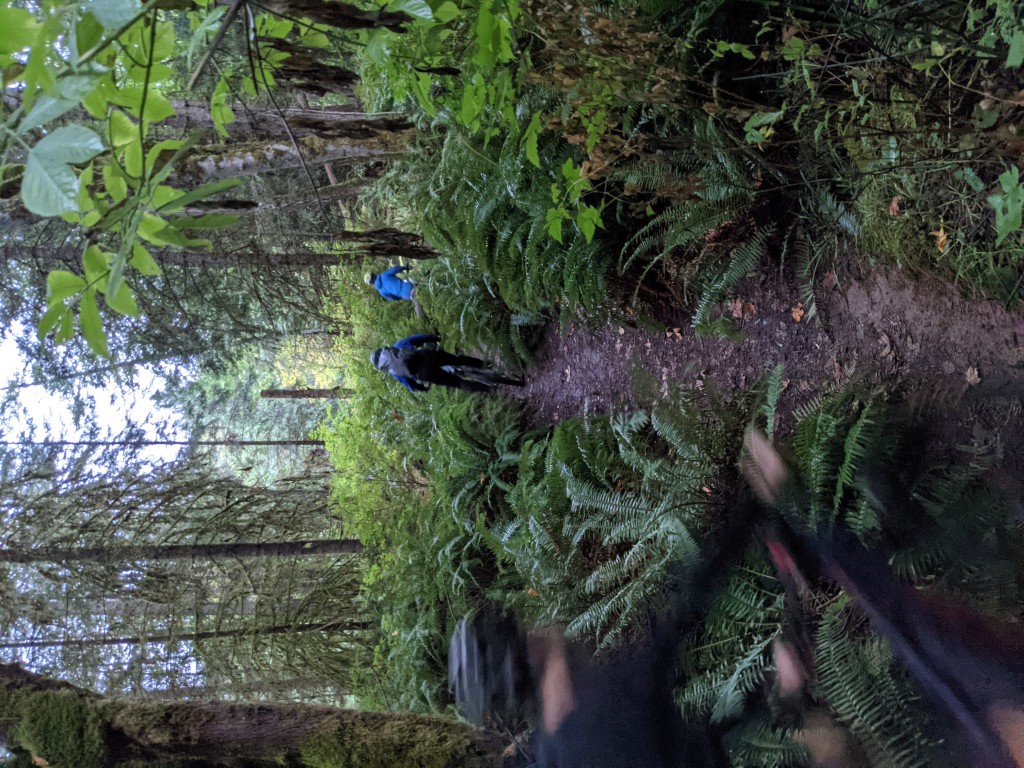 Protip: Single tracks are more fun on a mountain bike 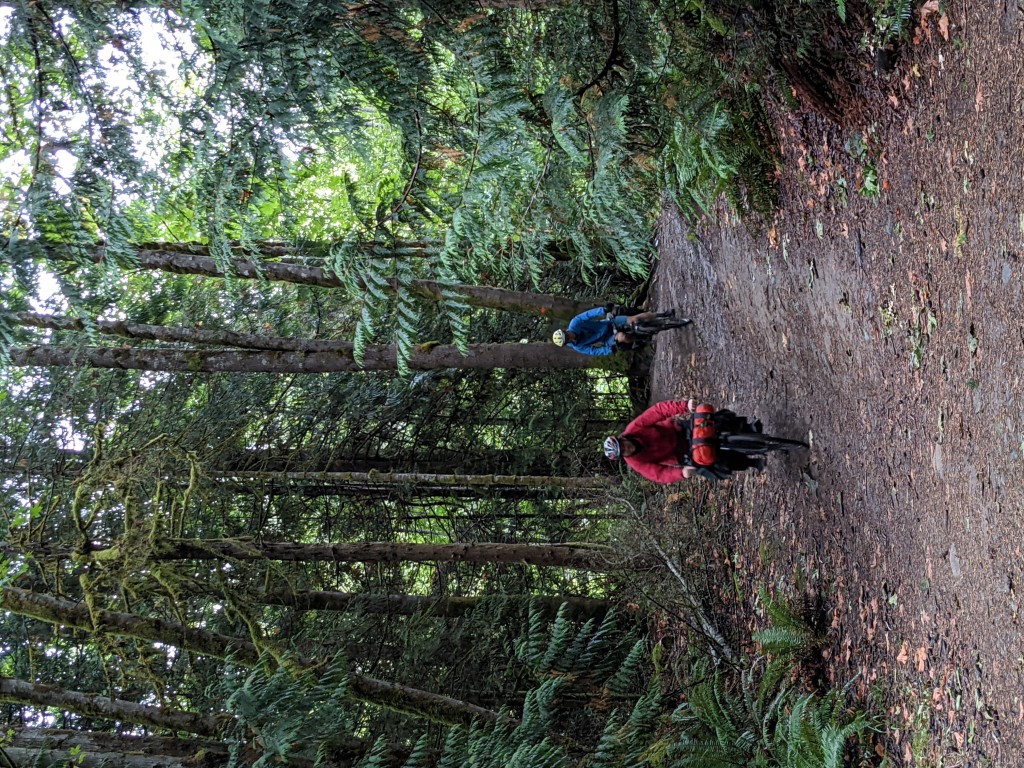 Henry and Luke having a good time on the trail

Then the fog and darkness set in. It became a lot more difficult to navigate in the woods. We kept going on the wrong trails, only to check the phone again and turn around. At one point, our GPS showed a four-way intersection, but we only saw three, and it kept saying we went the wrong way. Turns out, the correct trail was covered by the bush! At this point, you can probably tell we were not experienced with this whole outdoor thing. Use at own risk

Finally, we saw a light, a sign of modern civilization. It was somebody’s house. Our GPS said there was a trail, but all we could see was the house, so we ran across their backyard and got back on the smooth-smooth tarmac. We sprinted with all the energy we had left to get to the campground. 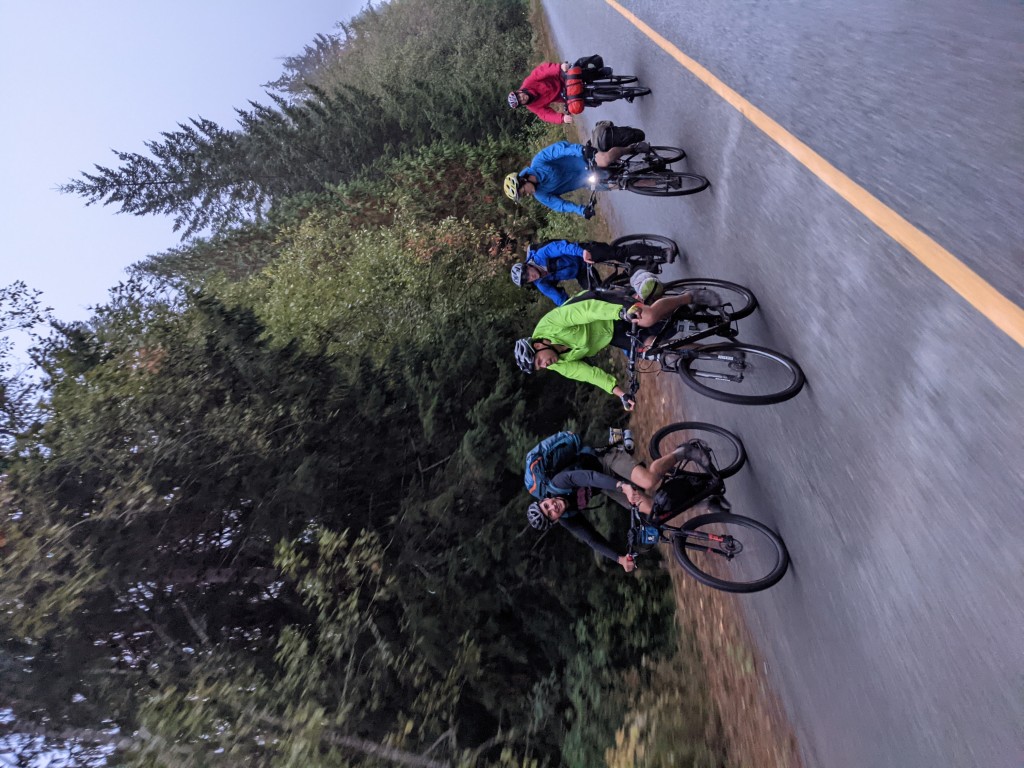 Going full gas to the campground before it gets dark

At 8pm, after taking a full two hours to cover only 15km, we arrived at the Englishman River Fall Provincial Park. Thankfully, we managed to get to the campsite and erect our tents before it got completely dark. Exhausted after a long and wet day of riding, we had dinner and went straight to sleep. Protip: Dinner tastes so much better after a long day

The next morning, we woke up to a beautiful, sunny blue sky and packed our bikes for the ride home. Just before leaving, we stopped by the gorgeous Englishman River Fall. I’m glad we didn’t have time to swim, because no one would have survived that jump. We all unanimously agreed to take the road and avoid all the mtb trail shenanigans from the night before. Having taken the road yesterday, Vincent led us back into Parksville. From there, we retraced our route back to Landzville via the highway. Then we took the E&N trail, another paved urban trail, all the way back to the ferry in Nanaimo. I’m not sure if the way back was easier, or if it was just the sun. Strong start to another long day

Having refueled with BC Ferries Whitespot burgers and fries, we disembarked the ferry at Horseshoe Bay for the final stretch home. After the initial big hill out of the village, the rest of the ride back on Marine Drive was beautiful. Once again, we came across that group of bikepackers we’d seen the previous day. They overtook us, we overtook them. We both recognised each other’s existence, but being Vancouverites, we did not talk. Each time we pass, I wonder, who are these people? Where did they come from? Where did they go? Protip: If you don’t have a spoon, use a rock (Photo by Luke)

After crossing the Lions Gate Bridge, the other group parted from us and turned into Stanley Park. May the coyotes have mercy on them. Then one by one, each of us also parted ways, riding into the sunset.

6 Responses to Bikepacking the Englishman River: The Newbie Experience