Bike-Hike-Bike in the South Chilcotins

Posted on September 26, 2021 by Melissa Bernstein

Between Friday July 30 and Monday August 2nd, 3 VOCers went out to do something they had never done before. Well, 2 of them. And there is no coincidence that this group bikepacked the same route that Isaac Borrego hiked last summer. Or that another bikepacking trip report to the South Chilcotins was shared immediately after some other VOCers explored the same park. Well this story is ours (well mine). After some light email faff, substantial bike and car faff, and plenty of stoke, myself, Shuyu Fan, and Jacob Grossbard made our way up to the South Chilcotin Provincial Park near Gold Bridge, British Columbia.

I had never been past Whistler before, so driving 3 hours past Pemberton was quite the adventure for me. The Pemberton Valley was beautiful at sunset Friday night. Shuyu was a beast driving on the Hurley FSR, making excellent time and passing many vehicles on the wide road. We arrived at BC Hydro’s Gun Creek campground, where we pulled into a flat-ish gravel pit minutes before another car pulled in trying to share with us. Shuyu talked with them. They left.

My sleep the first night was good with the rushing waters from Gun Creek meters from our tent. During breakfast, Jacob and I did some much needed calorie counting for the rest of the trip. We ended up leaving behind almost a kilo of weight worth of food in the car. There is no room for overpacking while bikepacking. Either you don’t have space on your bike or you don’t want to carry more weight than you have to.

After a slight 30-minute detour to find the right logging road, we made it to the trailhead. Eventually and still before noon, we got on our bikes, ready to bike the 25km to Hummingbird Lake.

Not even 5 minutes in, we hit our first hike-a-bike section. 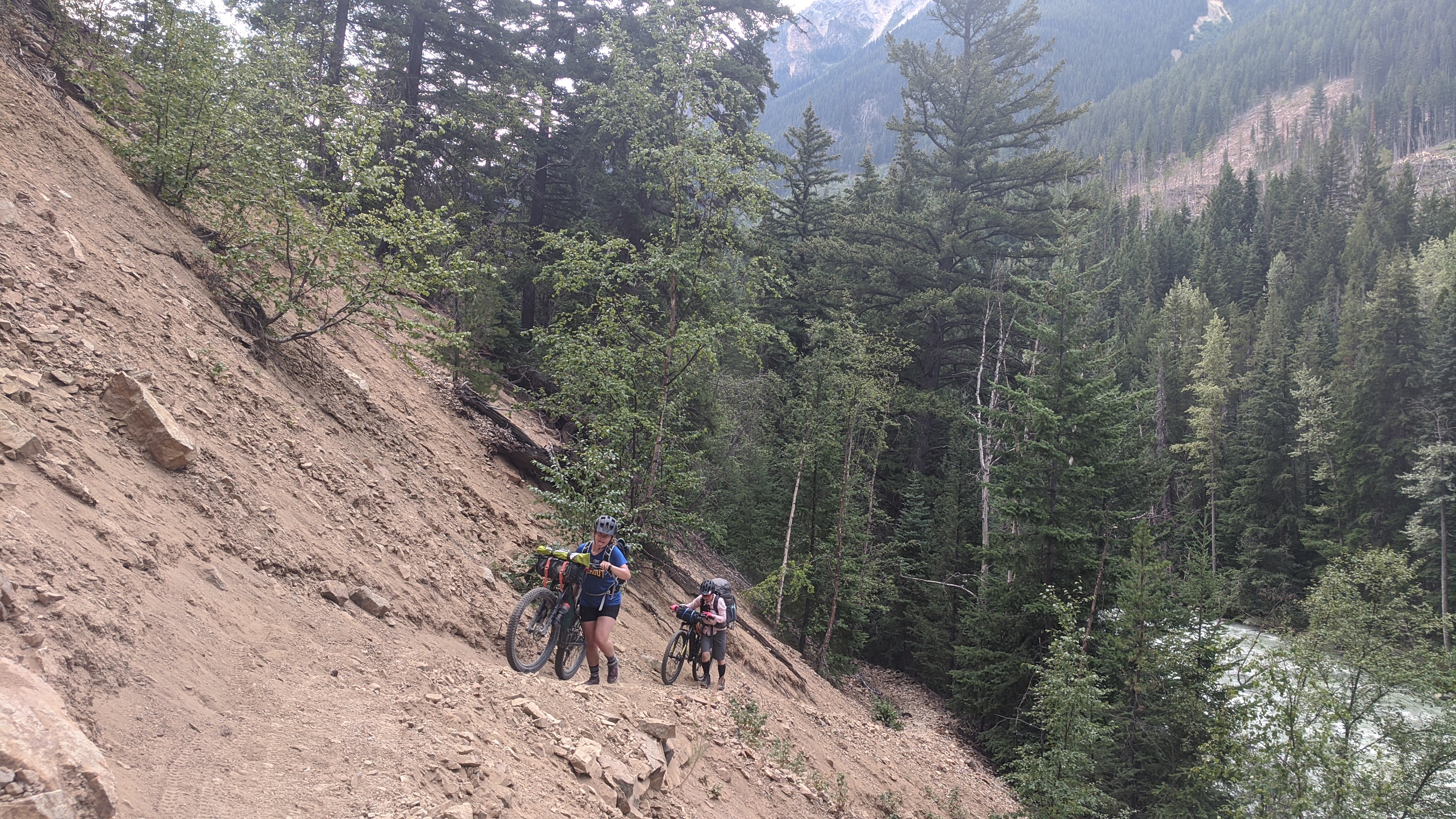 Melissa and Shuyu hike-a-bike on the washed-out scree slope. Photo by Jacob

We continued on through the relatively smooth and flat singletrack, stopping for water and snacks every so often. The mosuitoes weren’t great.

Jacob and Shuyu during a snack break. Photo by Melissa

Looking comfy. Jacob’s photo position on a bridge with Shuyu in the background. Photo by Melissa

For Jacob and I, our lunch consisted of tortillas, cheese, pepperoni sticks, chipotle mayo, and the addicting honey mustard pretzels. We were the definition of health. Our under-the-bridge lunchtime entertainment was hearing two horses pass over the bridge. The South Chilcotin range is well known for its horse-accessed camping as well as hiking and bikepacking.

The afternoon riding consisted of beautiful open fields with views of the surrounding peaks.

Melissa’s bike in a field with Jacob way out in front. Photo by Melissa 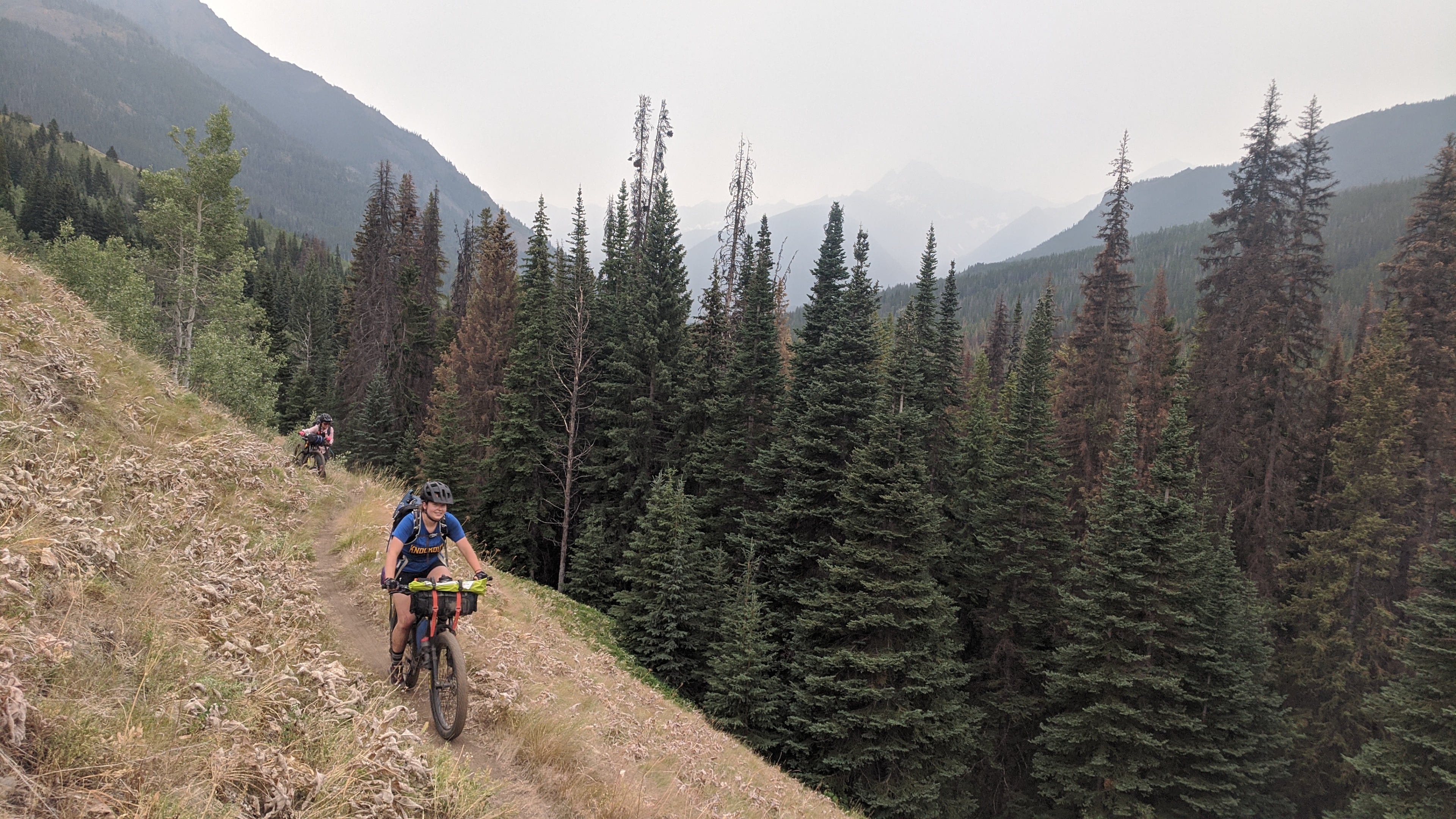 It rained a bit this afternoon which was a great relief from the heat. Though, fatigue soon started to set in for myself and Shuyu where we found ourselves falling a few times, getting our bodies and minds bruised from the fun. I had one nasty tumble where I fell down quite a ways off the trail. I was trying to get going after stopping, but I didn’t have enough forward momentum so I just tipped down. Having my bike fall on top of me was very scary, but I was lucky to not get seriously injured in the spiky brush. Thanks Jacob for helping me out.

We arrived at camp shortly after, at Hummingbird Lake!

Jacob at camp. Photo by Melissa.

Shortly after arriving at camp, we heard a large group approaching. We quickly tried to spread out all over the campsite as to get them to camp somewhere else, but then we realized we knew them. It was Maria and Fernando (other VOCers) and a bunch of their friends. We felt bad and split up the campsite to give us all some space. Maria’s group brought whole bottles of wine with them on their 25km hike to camp. They didn’t share.

The next morning, myself, Jacob, and Shuyu set off towards Trigger Lake on foot. We let a number of Tyax guided mountain bike groups pass us on their plane-assisted day adventures. Just after Trigger (very nice outhouse btw), we started our ascent up towards Deer Pass. We soon were up above tree level and the views were spectacular. We let another Tyax group pass us on their way down from Deer Pass. Jacob and I both wished we had hauled our bikes up – its a spectacular backdrop to bike in and the trails were in great condition. 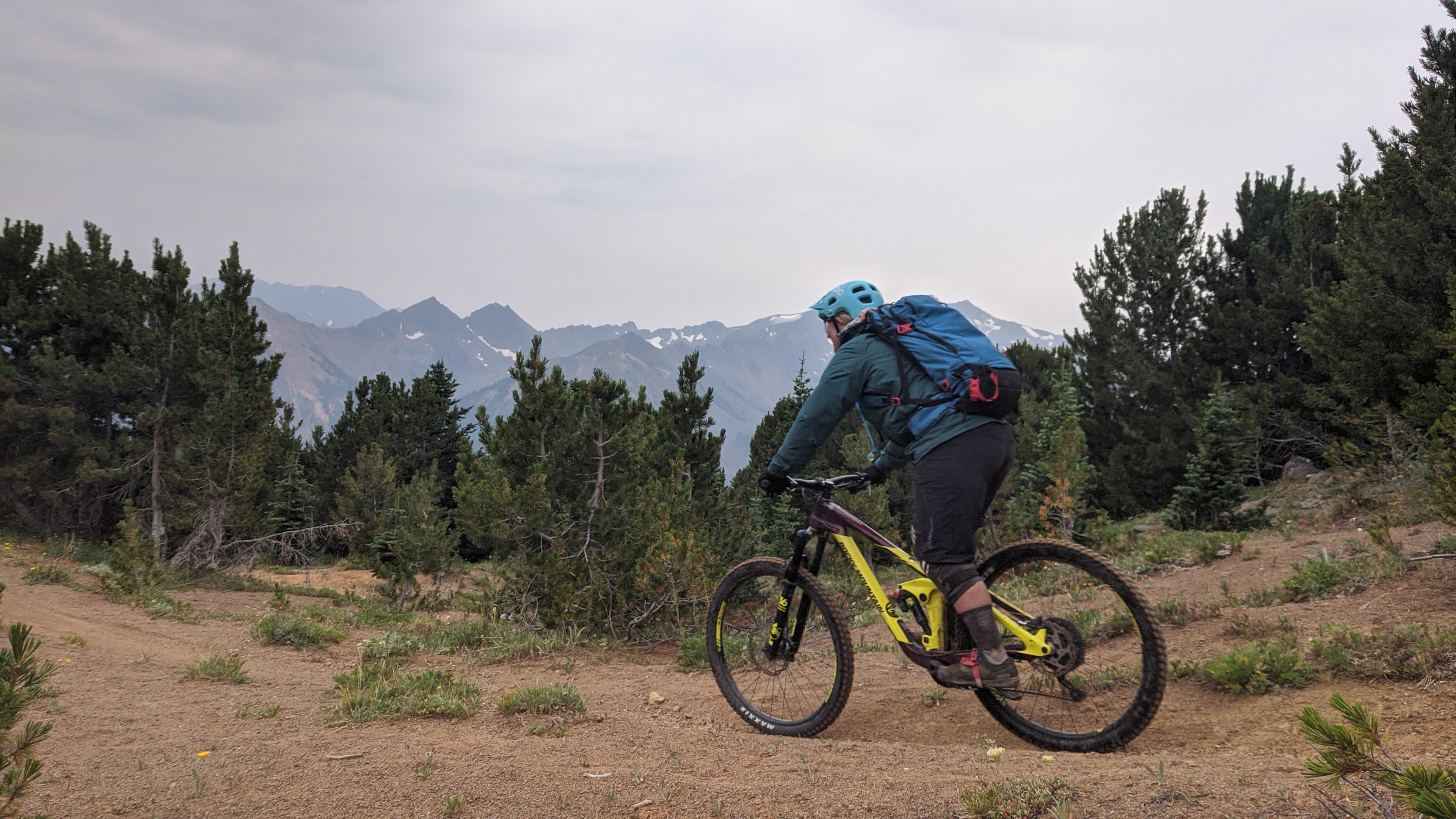 A Tyax group rider shredding the trails near Deer Pass. Photo by Melissa.

We kept on hiking up the mellow inclines to Deer Pass. At some point, we decided to take lunch and mother nature started to cry. She only cried briefly. We explored the top of Deer Pass looking north and took some pictures. We picked up some trash. Someone had covered toilet paper with some rocks, but poorly. I must give them credit – it was a lovely poop spot.

Melissa at the great poop spot. Photo by Shuyu

From here, we looked right at the mountaineering route Shuyu had originally propose we attempt, east towards Mt. Sheba. It was not viable. We turned west instead and went up Mt. Solomon. The ascent up was quite mellow, with some light boulder/scree crossing that I only got a little scared on. It was fine. Going up the north face of Mt. Solomon is less steep than the east face. I would recommend the north face if you’re new to scrambling. The views at the top were quite different facing north and south. To the north was very hazy. We were a bit hesitant to go on our trip because of the smoke in the interior, but were we were, it was A-ok. The north part of South Chilcotin Park probably had noticeable smoke. Red and blue cause we’re American ;). Photo by Shuyu

On our descent down, we went up this little rock thing that probably has a technical name. It was fun. 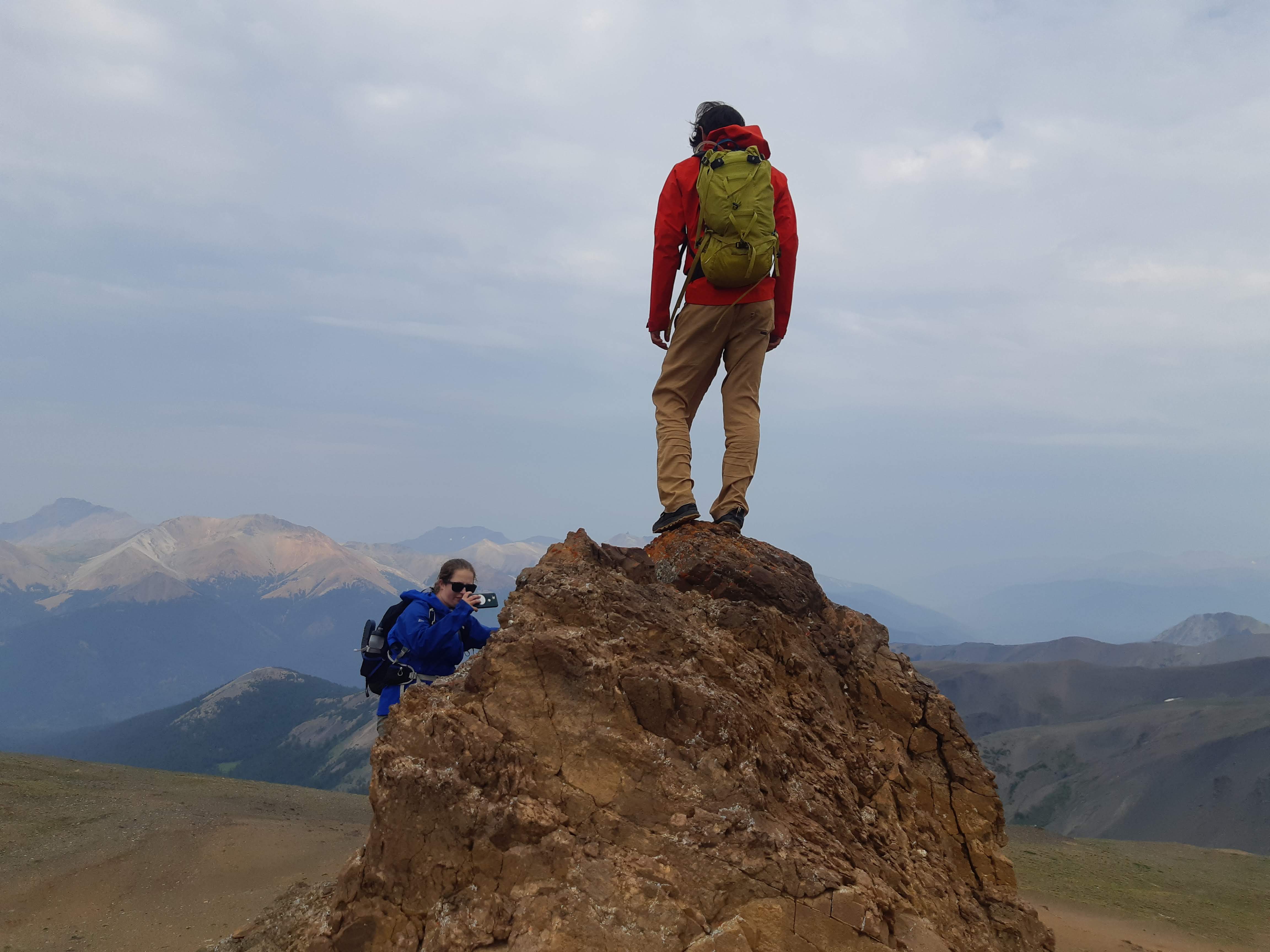 Getting that angle right. Photo by Shuyu 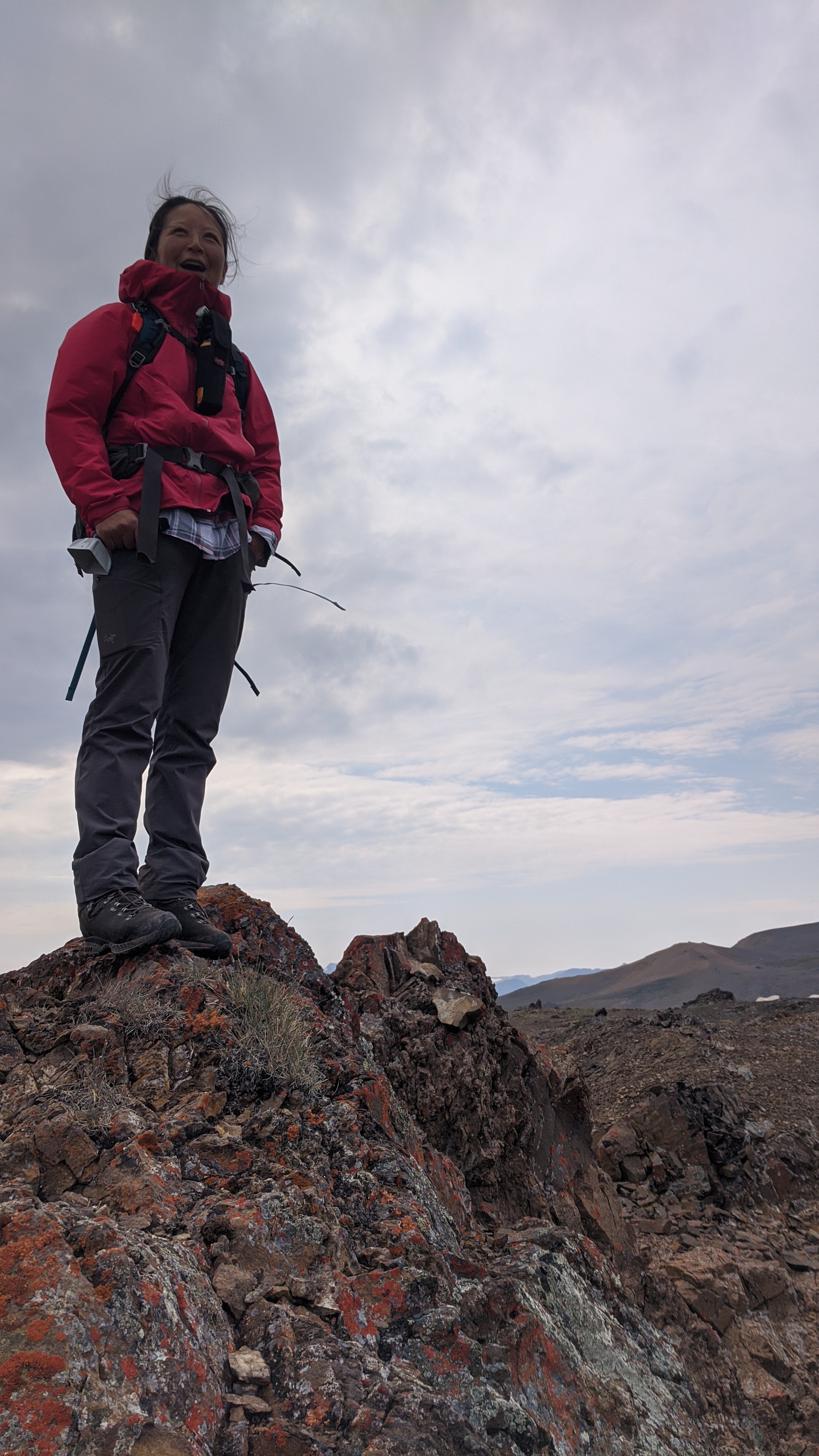 Shuyu on the pointy thing. Photo by Jacob

As we descended back towards Deer Pass, we met two mountain bikers on an epic day ride, starting and ending at Spruce Lake. It was a long day for them. They were super nice and we ended up taking some photos of them on our descent down. 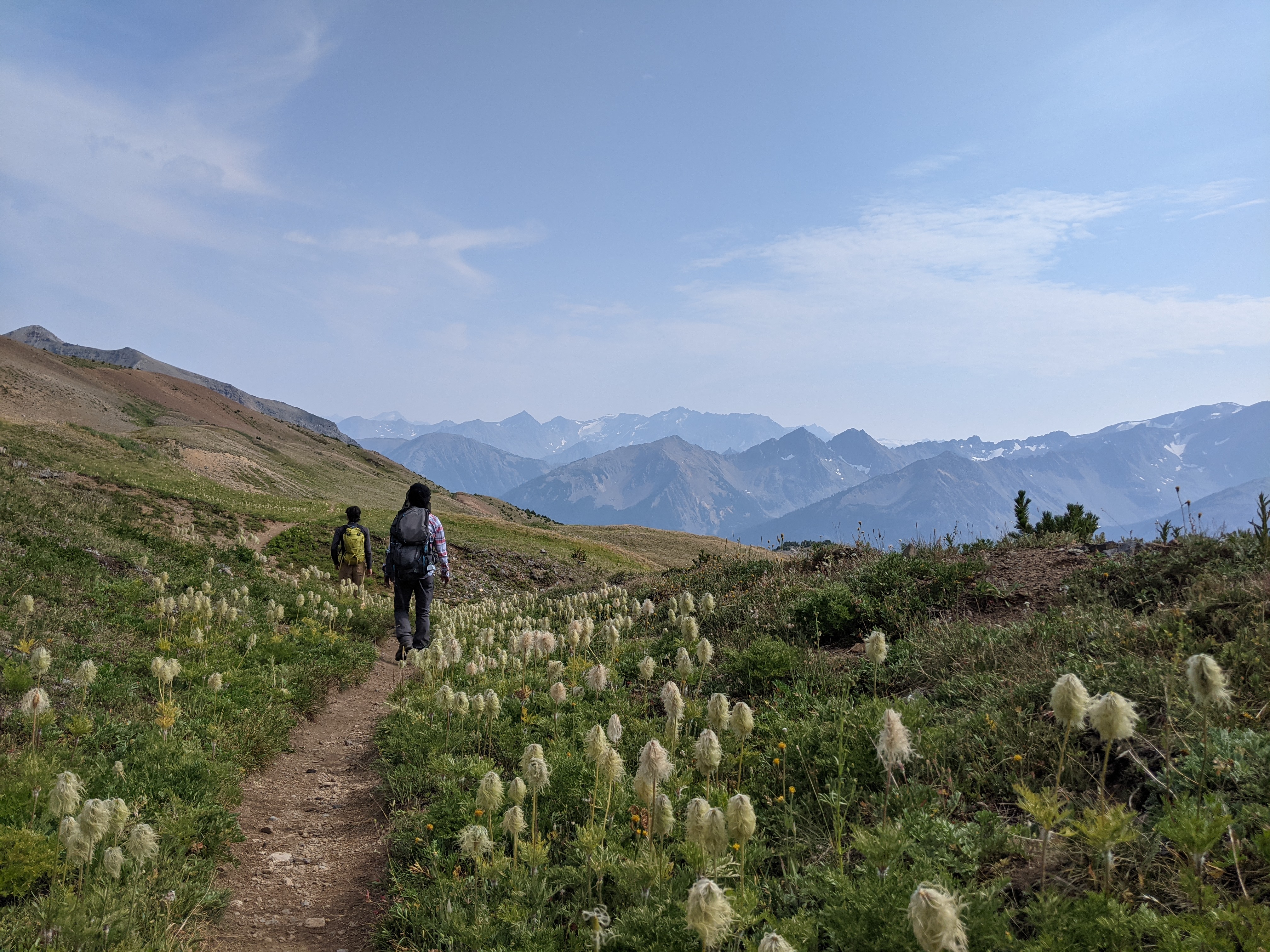 Flowers that reminded me of the Lorax. Photo by Melissa

Mt Sheba with the twin peaks in the distance on the left, looking east from Deer Pass. Photo by Shuyu 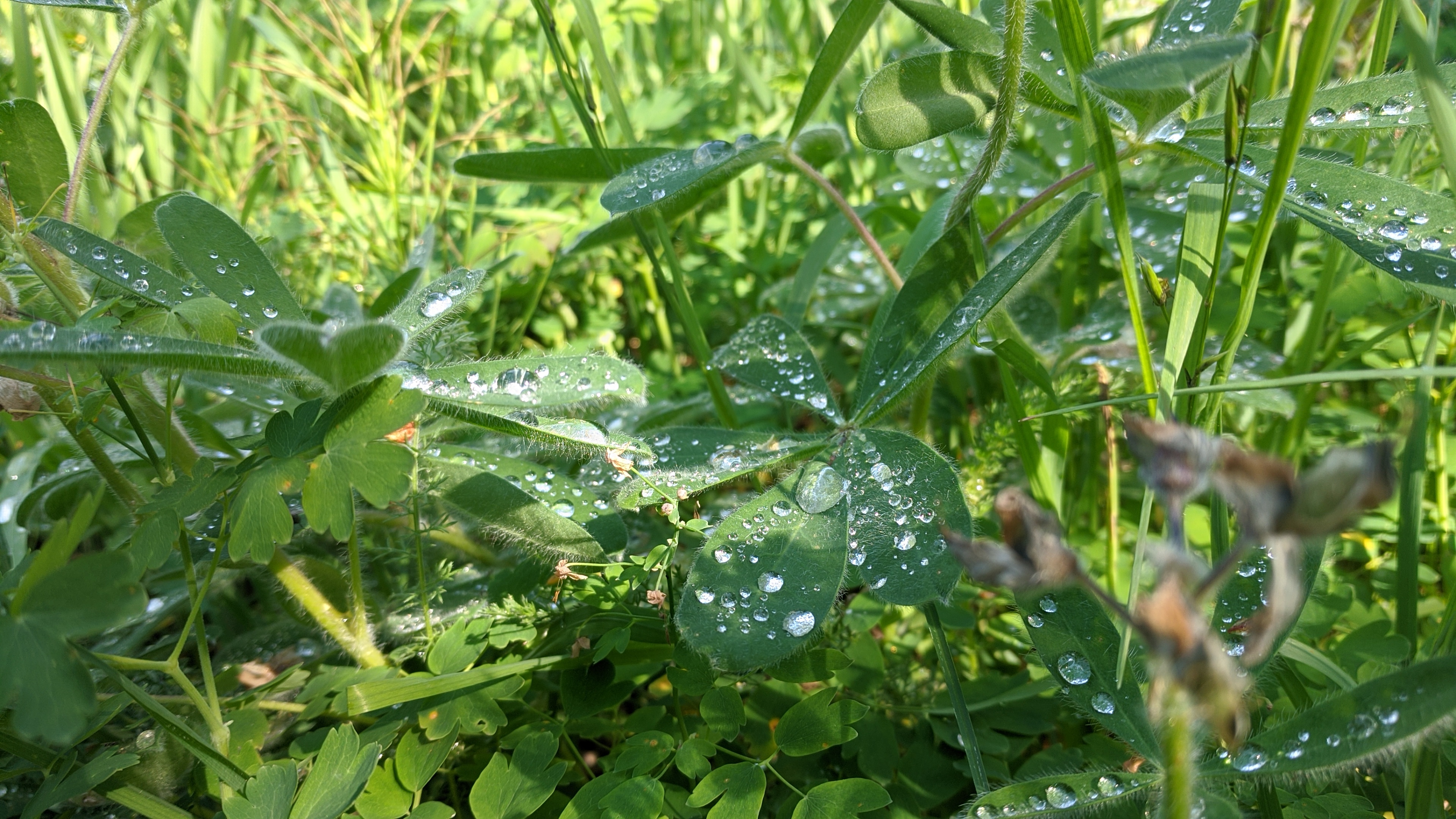 Once we got down to valley level, we were blessed with full sun. The valley’s marsh/meadows were gorgeous in my humble opinion. I enjoyed a quick (skinny) dip in Trigger Lake. It was cold. It was a classic dip and definitely not a swim.

We made our way the fast 4km from Trigger Lake to our camp at Hummingbird Lake. I prepared my new trail burritos for Jacob and myself while Shuyu went for a splash (not technically a dip) and Jacob went for a quick ride along the trail we just hiked. The trail burritos consisted of half a packet of taco seasoning, dehydrated black beans and veggies (both from Famous Foods – check them out on Kingsway), cheddar cheese, and some extra pepperoni sticks. The veggies needed more water than the beans to rehydrate as they were still a bit crunchy when we ate. 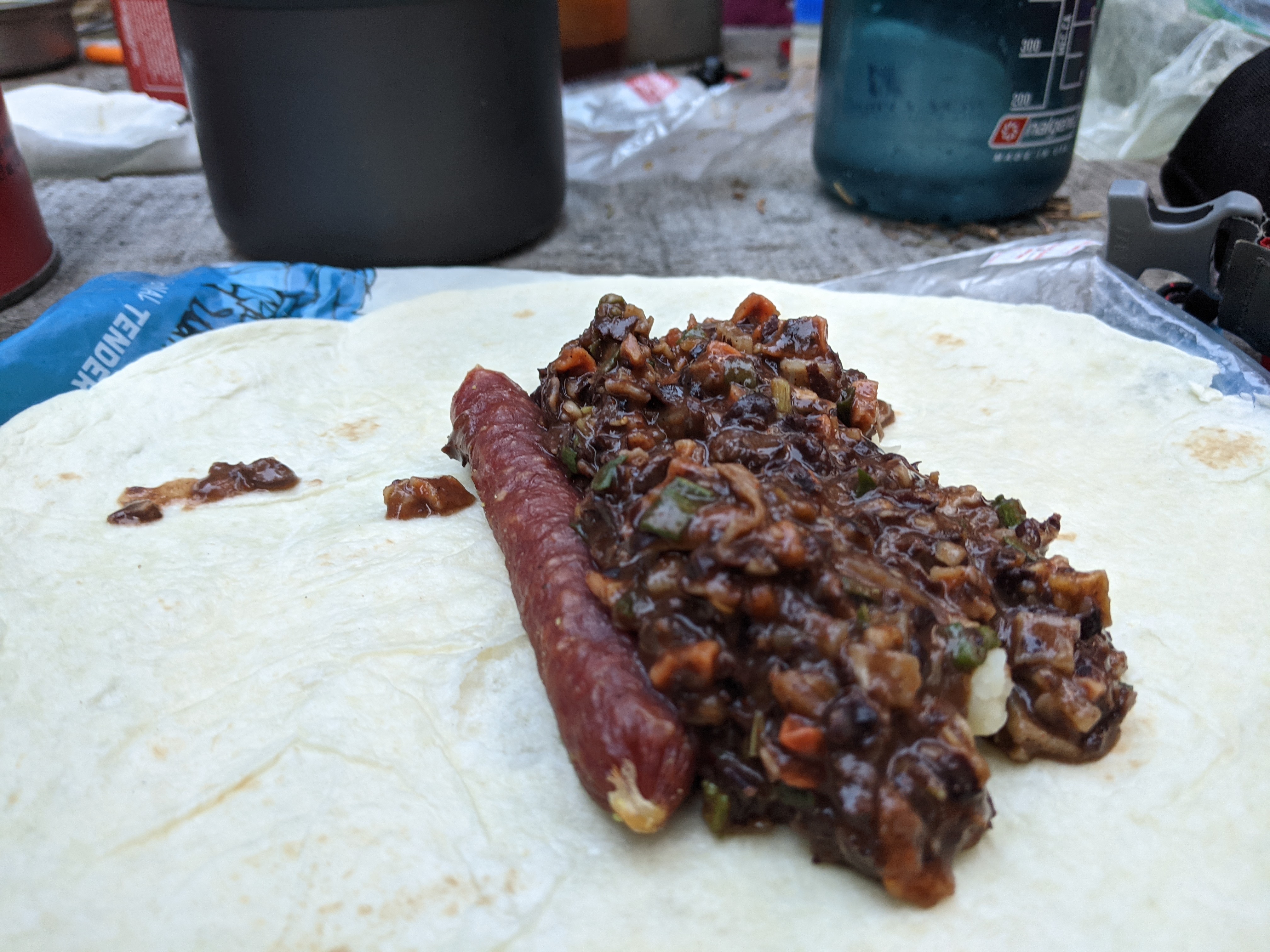 Jacob went for an actual skinny swim and managed to tread water for enough time to flip both birds at me as I tried to document the moment. Jacob going for a *real* swim. Photo by Melissa

Maria’s group got back late as they were out exploring west of Trigger Lake to Warner Pass. Good thing at least one of them had headlamps. We fell asleep quick for a second night.

In the morning, while Shuyu and Jacob faffed, I took the opportunity to take my (hopefully-one-day) bikepacking.com worthy photos of my setup. And to nerd out on gear really quick, here’s what I had on my bike.

Frame bag: Custom bag by BB Bike Bags - and yes I chose IKEA colors because its my favorite store, tied up there with Trader Joes and MEC

Rack: Bontrager/Trek XL rack (the only one that fits plus sized tires), MEC 20L purple dry bag, Voile Rack straps (32″ size worked better for the big bag than the 25″) x2 Sideview (drivetrain side of course). Photo by Melissa

The ride out was beautiful (as you’ll see in the video). Pretty simple and slightly downhill singletrack through meadows and thin forests. We took a higher route than on the way in and it was a great decision (the lower route was very overgrown and frusterating to ride in). 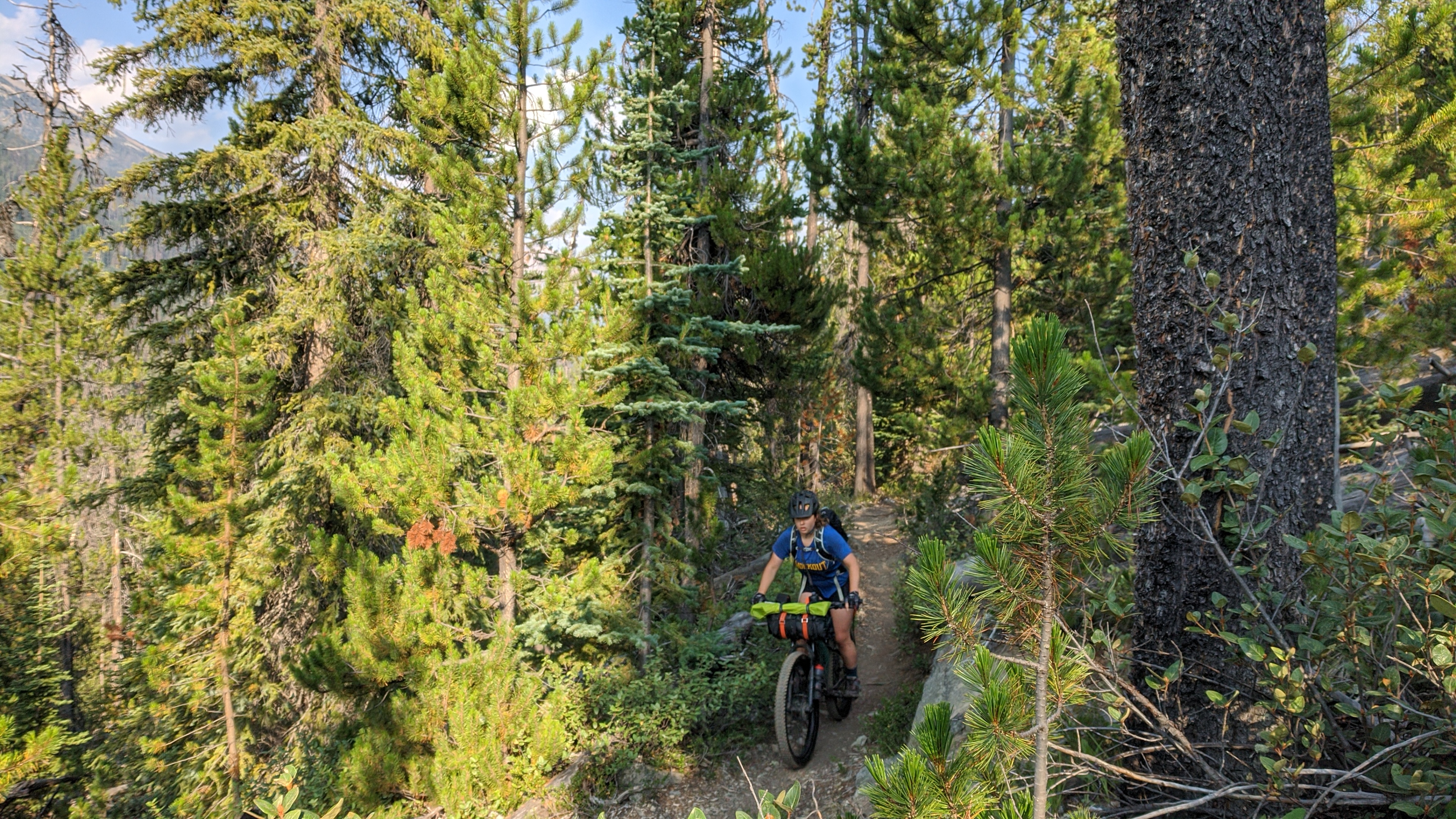 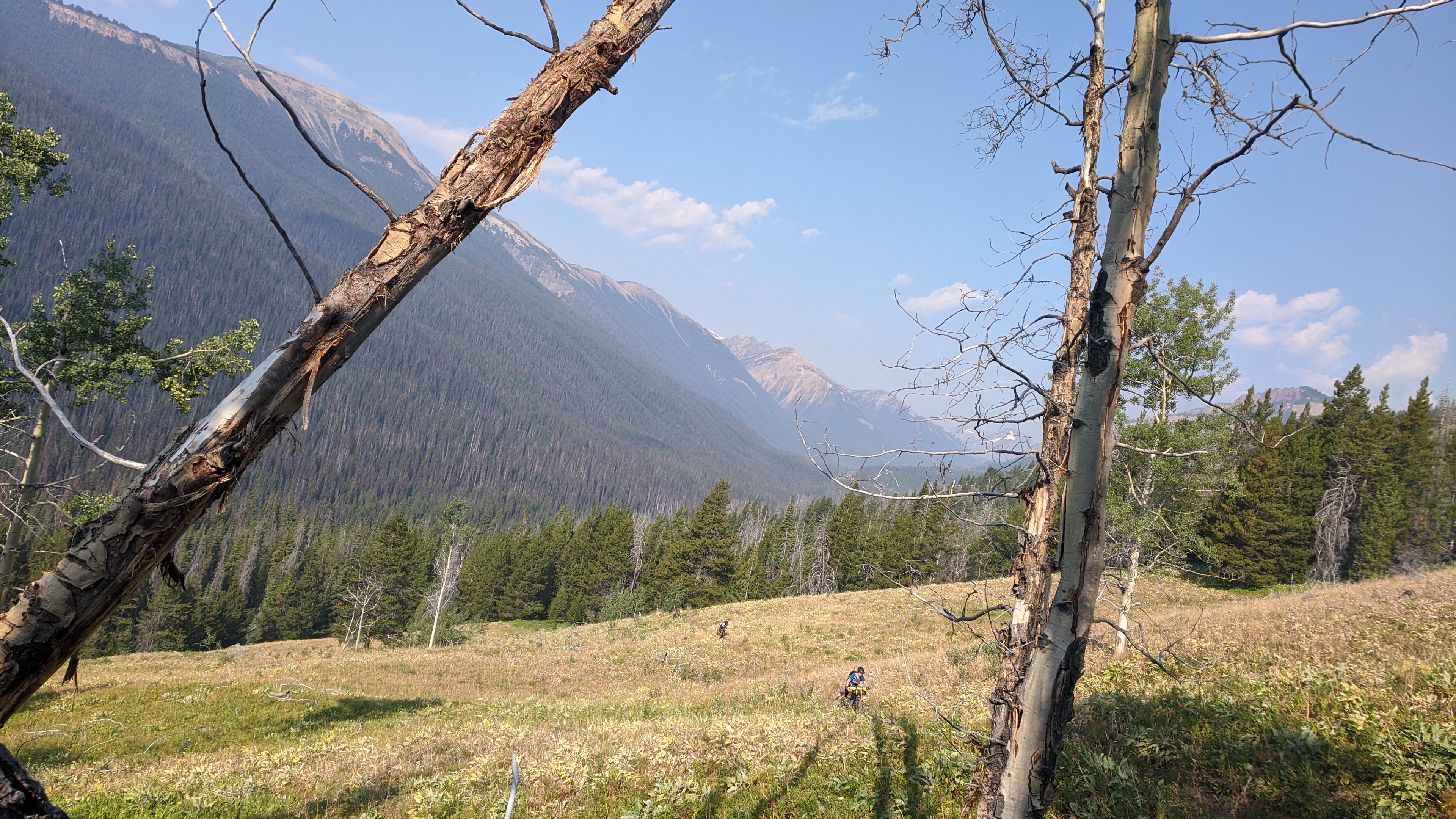 Melissa in an open meadow. Photo by Jacob

After a while, we took a nice rest break to have snacks, fill up on water at a creek, and take our mandatory VOC group photo.

We continued onwards, with a few more ups and downs. The exhaustion was starting to set in but the stoke was high!

We had a quick lunch before the flies and mosquitoes got unbearable.

We got back to the trailhead before 2pm, ahead of schedule! We took dips in the fast moving creek just next to the trailhead. It was getting HOT! I sat in the car and tried not to be a grumpy bitch. I was tired, hungry, wanted to go home, but I just said I didn’t want to get sunburnt (which was also true!)

After a few minutes, some of Maria’s crew got back and they had issues starting their car. To close the circle of VOCers helping each other this weekend, Shuyu helped jumpstart Maria’s car. The reason why this is a little circle is because two nights earlier, Maria’s crew helped out Isaac Borrego on his trip near Pemberton when the car he was in got into trouble (I’ll leave it at that). And because Isaac lent Shuyu his 3-bike hitch rack for our trip! Gotta love coincidences and the VOC helping each other out (aka when cars “break” down… *eyeroll*)

Overall, it was a wonderful true bikepacking trip for Jacob and I (offroad, no panniers, fully self-supported) and we loved it! Shuyu had been out here the year before in a different part of the park. There’s definitely a whole lot more to explore in the South Chilcotin area!

- going somewhere with lots of accessible water is very nice!

- small trips are less faffy, but bikes are super faffy

- there is only overpriced food in Pemberton, sans Macdonalds. But the ice cream was good! Also a lack of public washrooms :/ I still liked Pemberton though

- bikes are cool and so are you

Feel free to stalk me to ask me questions about the route or gear or anything about this trip/trips on bikes in general.

5 Responses to Bike-Hike-Bike in the South Chilcotins