Day 1 and 3 are written in Brendan’s POV.

Day 2 is written in Chester’s POV.

We met at the Burrard St. Bridge – in the early morning before the sun crossed the horizon. It was calm and the air was crisp, but a storm was in the forecast for the night and into the weekend. It was going to be a dark and stormy night – dum dum dum. We started off as a group of six riders – Thanky (the trip leader), Chester, Elvira, Shu Yu, Julia, and me – Brendan. We would later find out that only some would endure…

The ride from the Burrard St Bridge to Horseshoe Bay Ferry Terminal went smoothly. So smoothly that we got to the ferry terminal with time for a cup of coffee. Shortly after getting off the ferry in Nanaimo – thunderous crashing noise shook the earth – Elvira was on the ground (1st wipeout of the trip) but quickly got back to her feet. Not soon after, the adventurous Julia split ways with the group, choosing to take a challenging gravel path through the backcountry to get to the 1st campsite. Little did she know this route would feature a river crossing and truly rugged terrain. Just like that, five of us remained…

We ended up stopping in Ladysmith for lunch at a quaint establishment that let us park our bikes on the patio. The 1st day consisted mainly of road riding and some gravel trails. As the sun started to set, the rain began to roll in. That’s when I got a flat. With the wet conditions, repairing the flat was a group effort – at one point three people were struggling to unseat the tire from the rim. The tires fit very snugly on the rim and would not budge. We began to doubt whether the tire even had tubes, and perhaps the shop that assembled the bike set me up tubeless. With no success, we decided to look for help. After a short walk down the dark trail, we found a house tucked on the side of the path. Luckily, Rob opened the door and came to the rescue! Even with Rob’s help, it was no easy task – requiring tire levers in combination with a screwdriver to finally unseat the tire. 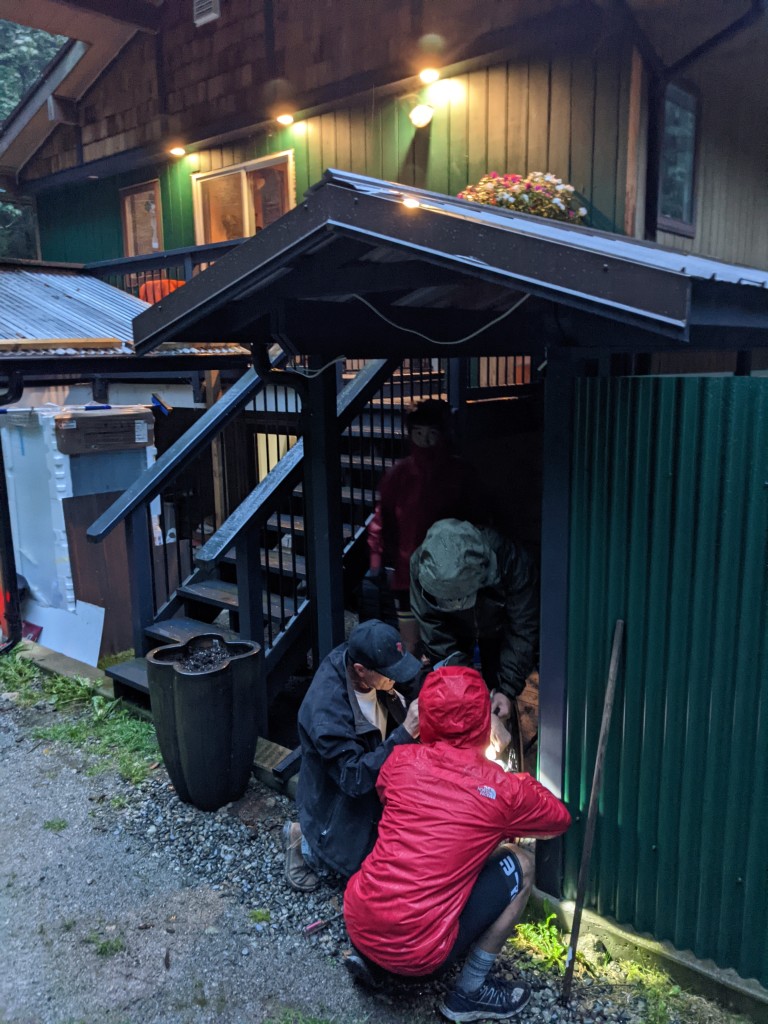 The house looked so cozy and warm, we wanted to go inside for cover so bad. However, it was getting late and we were still 10km from our campsite. Before heading to the campsite, we made a quick stop at a laundromat (recommended by Rob) to warm up and take advantage of the facilities. We were certain we would return. While there, we received a text from Julia, telling us she would not be making it to the campsite that night and would see us the next morning.

We ended up biking these 10 kilometers in pitch darkness through the forest, with only our bike lights to guide the way. We arrived at the Gordon Bay Campsite several hours behind schedule. But spirits were lifted as we cooked and ate dinner in the warm and dry washroom. Making dinner in the men’s washroom

The next morning, we had breakfast, packed up, then biked straight to the laundromat. Along the way, we bumped into Julia who told us all about her adventure. With the heavy rain, river crossings, and poor sleeping conditions the night before, she decided to head home. 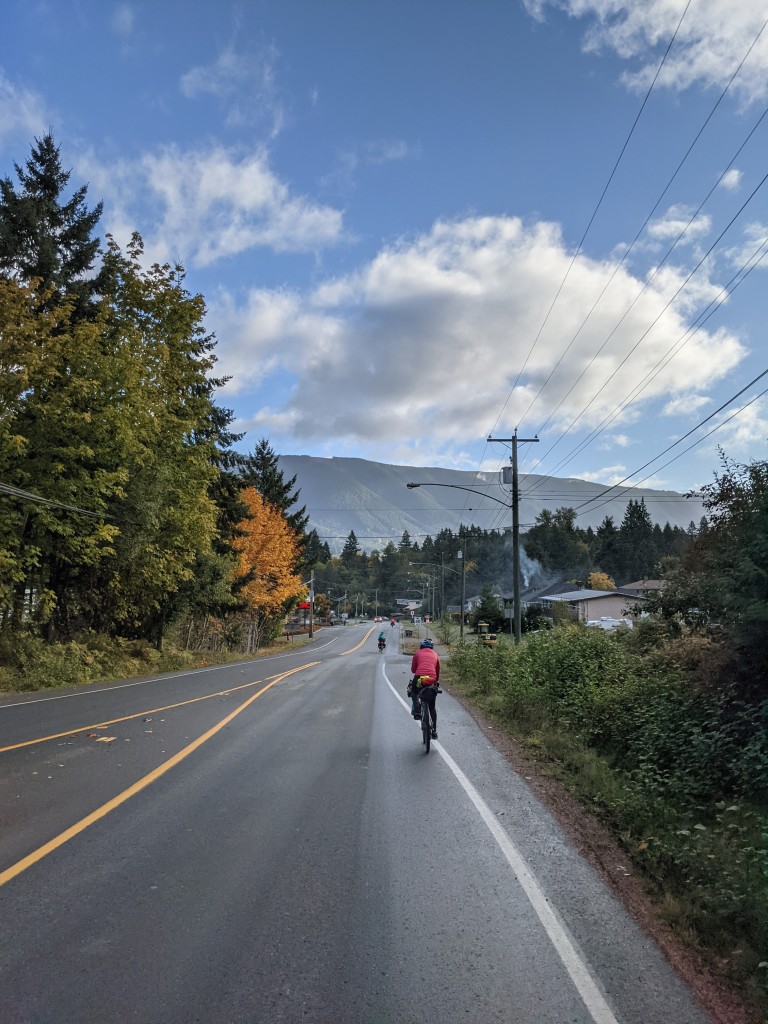 Coasting it to the laundromat

Thanky, Elvira, Shu Yu and Brendan put their wet shoes and socks in the drier. I, however, did not partake in the drying of shoes. I did not mind my damp shoes too much. While waiting for everything to dry, Brendan (who was barefoot) and I waddled over to the grocery store and gas station to fuel up. 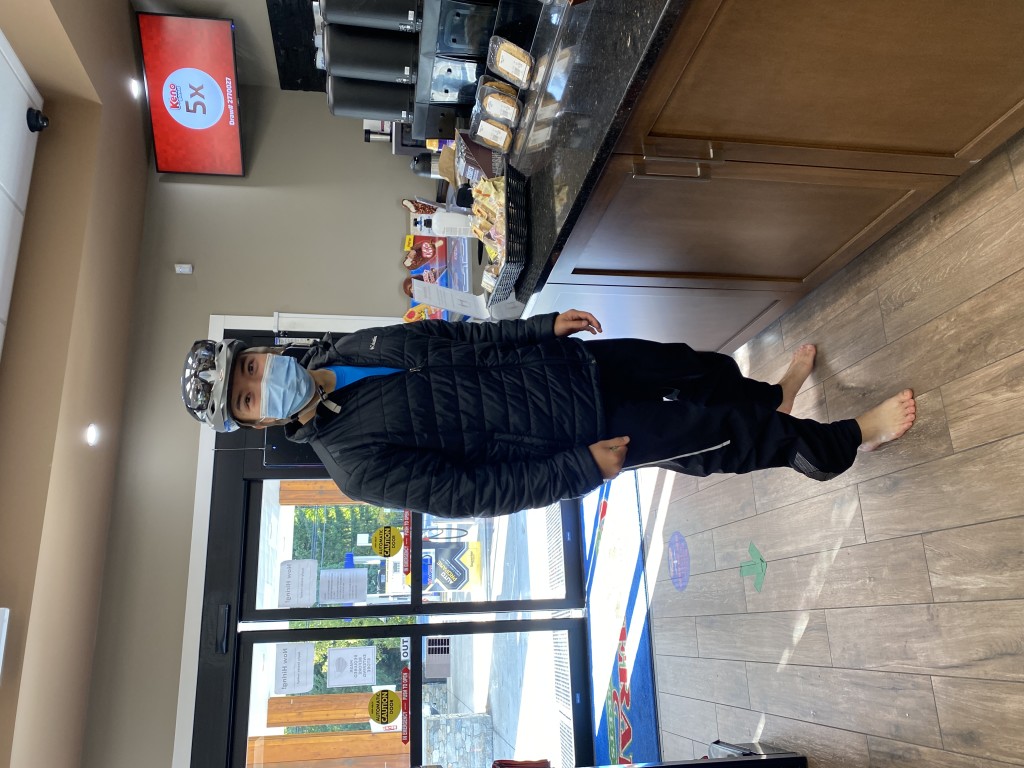 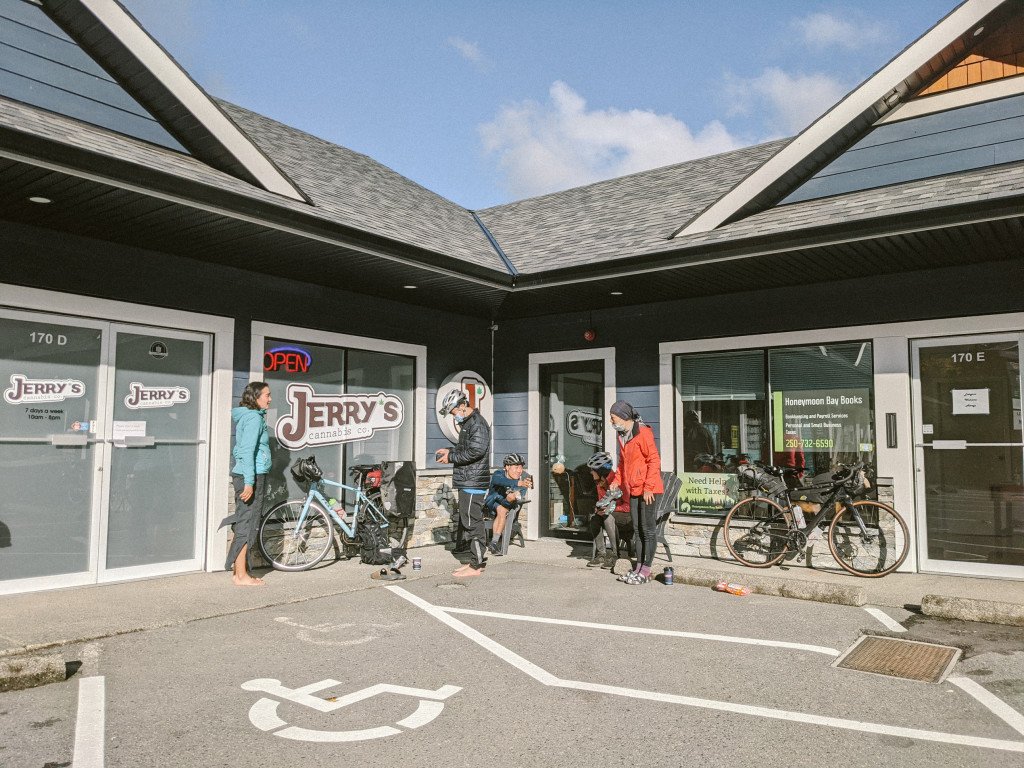 We soon set off and entered the Cowichan Valley Trail. It was going to be a day full of beautiful gravel, my fave! It was very refreshing to be on gravel, given we spent most of the day on the road the day prior. It was a breathtaking route with many beautiful trestle crossings, tall luscious trees, and calm flowing rivers. I was in my happy place. I could tell the others were too. Throughout the trail, we saw a lot of fallen trees, likely from the storm the night before. We spent some time clearing the trail of logs and debris where we could – one may say this was a workhike and bikepacking trip all in one! After stopping to admire the stunning views at Kinsol Trestle, we began our ascent up the Malahat trail – a steep climb involving 10-20% gradients and some hike-a-bike sections. This was especially difficult with our loaded rack and panniers full of gear. We celebrated as we reached the top. All of us were quite relieved that most of the climbing was over for the day. I was very excited for the gravel descent that was coming up. And off we went again! We sent it down the trail, as we watched the orange sun setting over the trees, producing nothing but golden goodness. After an especially steep section of descent, I gathered speed for the steep ascent that was in front of me. As I began climbing again, I heard a loud thump from behind. Shu Yu had crashed. 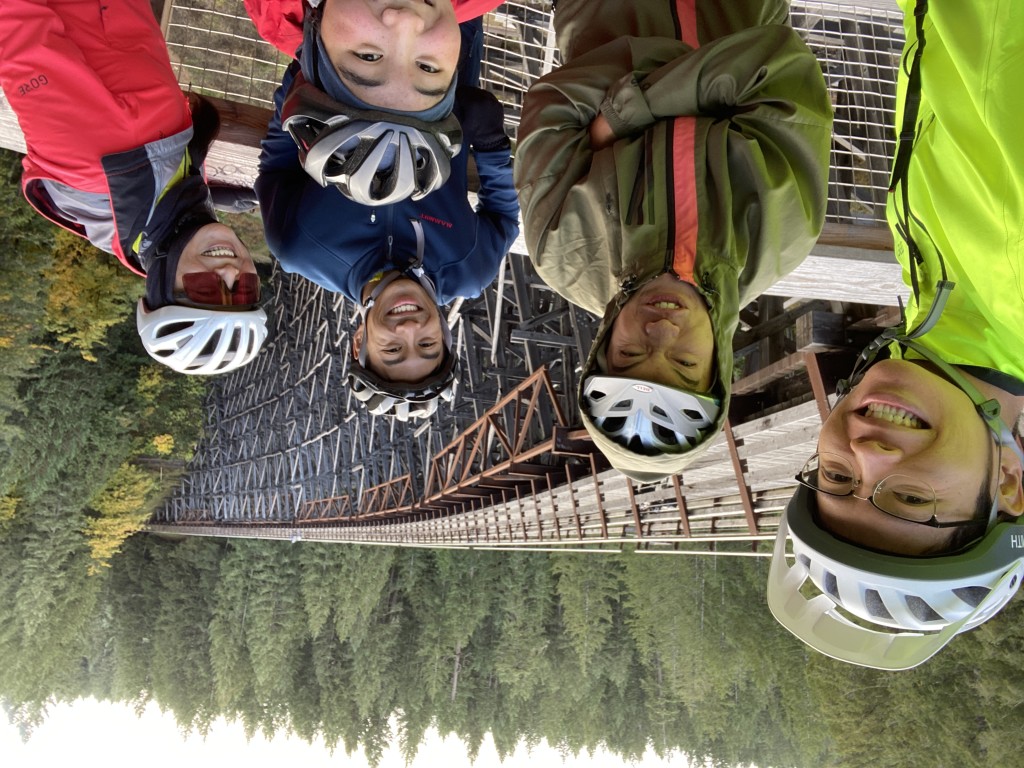 The Malahat climb was no joke! 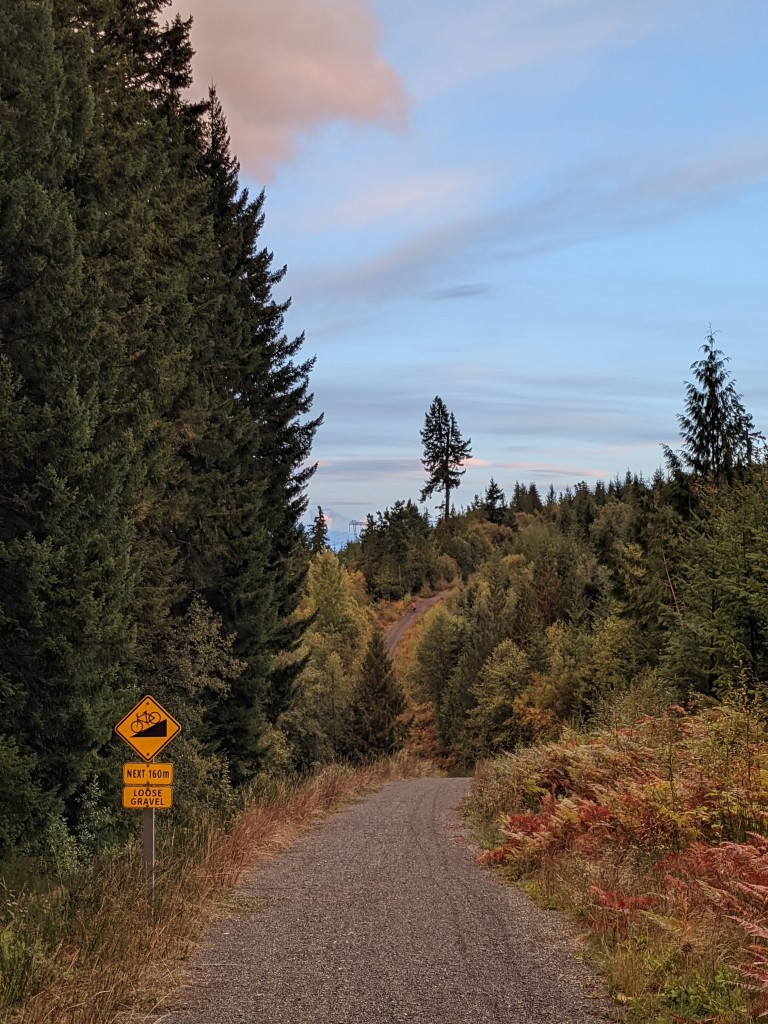 The descent before the crash.

Everyone came running down to the scene. Shu Yu was on the ground, clearly in shock. Her rain jacket had ripped open, her helmet had cracked, and her bike was several meters from where she was. After assessing the situation and asking where Shu Yu felt pain, we decided we had to call for help. At this moment, rain started to pour down on us once more as the sun went down. Due to the poor service on the trail, I walked up the path in search of a better signal. When I was finally able to call 911, I was put on hold for 30 minutes (for what felt like an eternity). The call was very choppy, however, after lots of walking up and down the trail to get a better signal, repeating myself, and describing Shu Yu’s situation, an ambulance was dispatched to our location. Despite us being in the middle of nowhere, an ambulance soon arrived at the top of the trail. Brendan, Elvira, Thanky, the paramedic, and I carried Shu Yu up the trail along with her belongings to the ambulance. As we said our goodbyes, the paramedic told us that they had to leave Shu Yu’s bike with us. And then there were four. 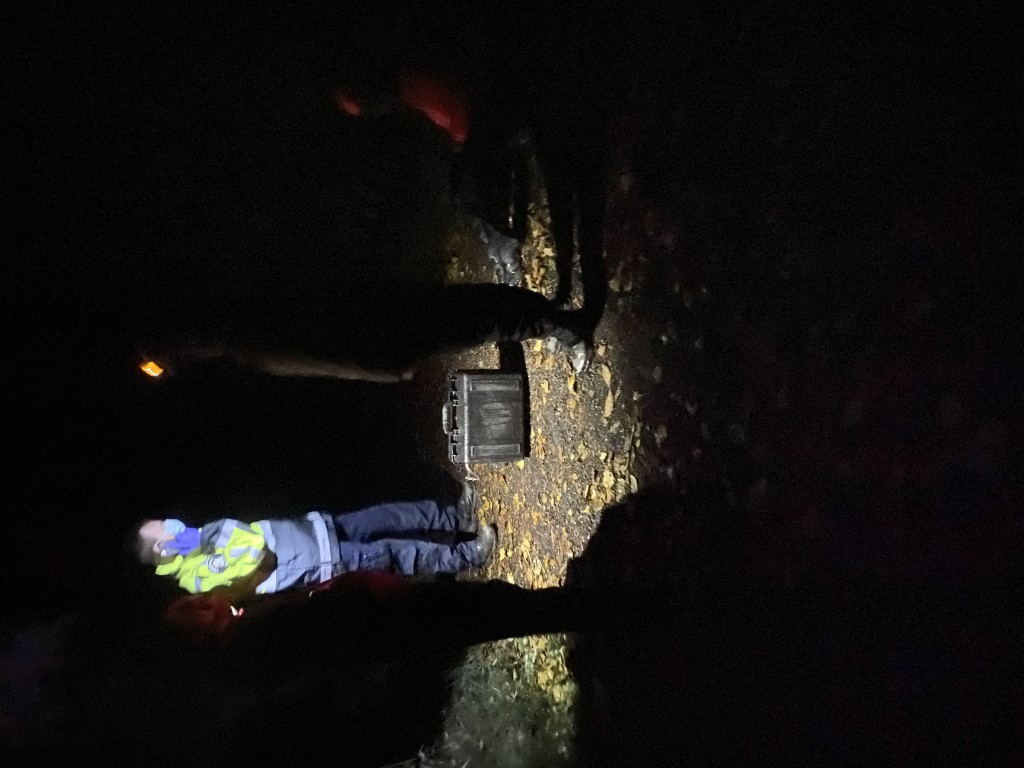 Paramedics at the scene

As we watched the ambulance drive off into the night, the four of us were left stranded in the storm, now with an extra bike. We had two options: to disassemble Shu Yu’s bike and have each of us carry parts of it on our bikes and ride towards the Goldstream Campground, or to get a ride and stay somewhere near the hospital. We decided on the latter so that we could visit Shu Yu the next morning. As I was the only one with phone service, I made several calls to different taxi companies – most of whom replied with “I have no idea where the hell you are man”. Luckily, Cobble Hill Taxi was there to save the day. I then arranged for a room at an inn and we were all set! Now, all we had to do was wait.

After an hour of waiting in the dark, an SUV pulled up. The cab seemed quite small. I started to wonder whether all five bikes would fit into the car. To our surprise, after 30 minutes of disassembling our bikes and playing a game of real-life Tetris, we were able to squeeze everything into the SUV including us! It was a very uncomfortable ride, but it didn’t matter, we were finally seeing the light at the end of the tunnel! Brendan managed to fall asleep many times during this car ride. 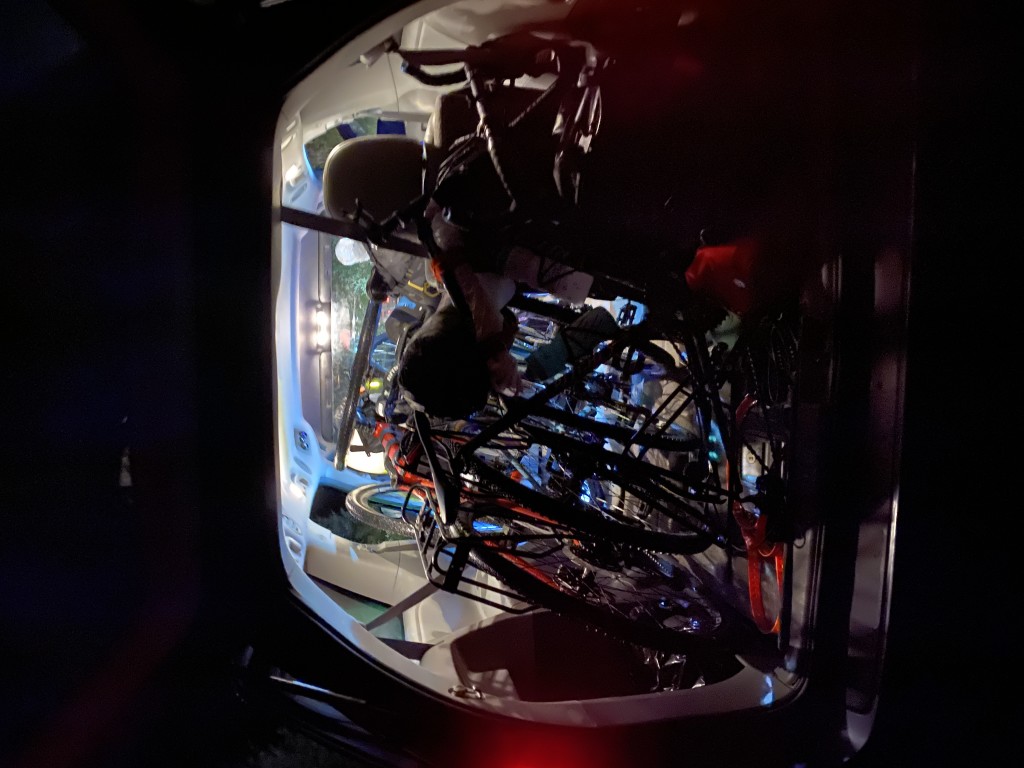 At the Tetris world champs

We soon returned to civilization and checked into the inn. We were exhausted. It was a tiring day, both physically and mentally. However, after some warm showers and re-fueling with high-quality nutrients from Burger King, everyone was in good spirits! Brendan and Thanky however, choose to forgo this luxury and brave another sweaty day without a shower (shocking!). We were especially happy to receive a call from Shu Yu saying that she would be joining us for the night after being discharged from the hospital, despite a fractured rib among a few other things. There we all were, all five of us, in this small, but warm and cozy room. We were all united again! We quickly drifted into a deep sleep. 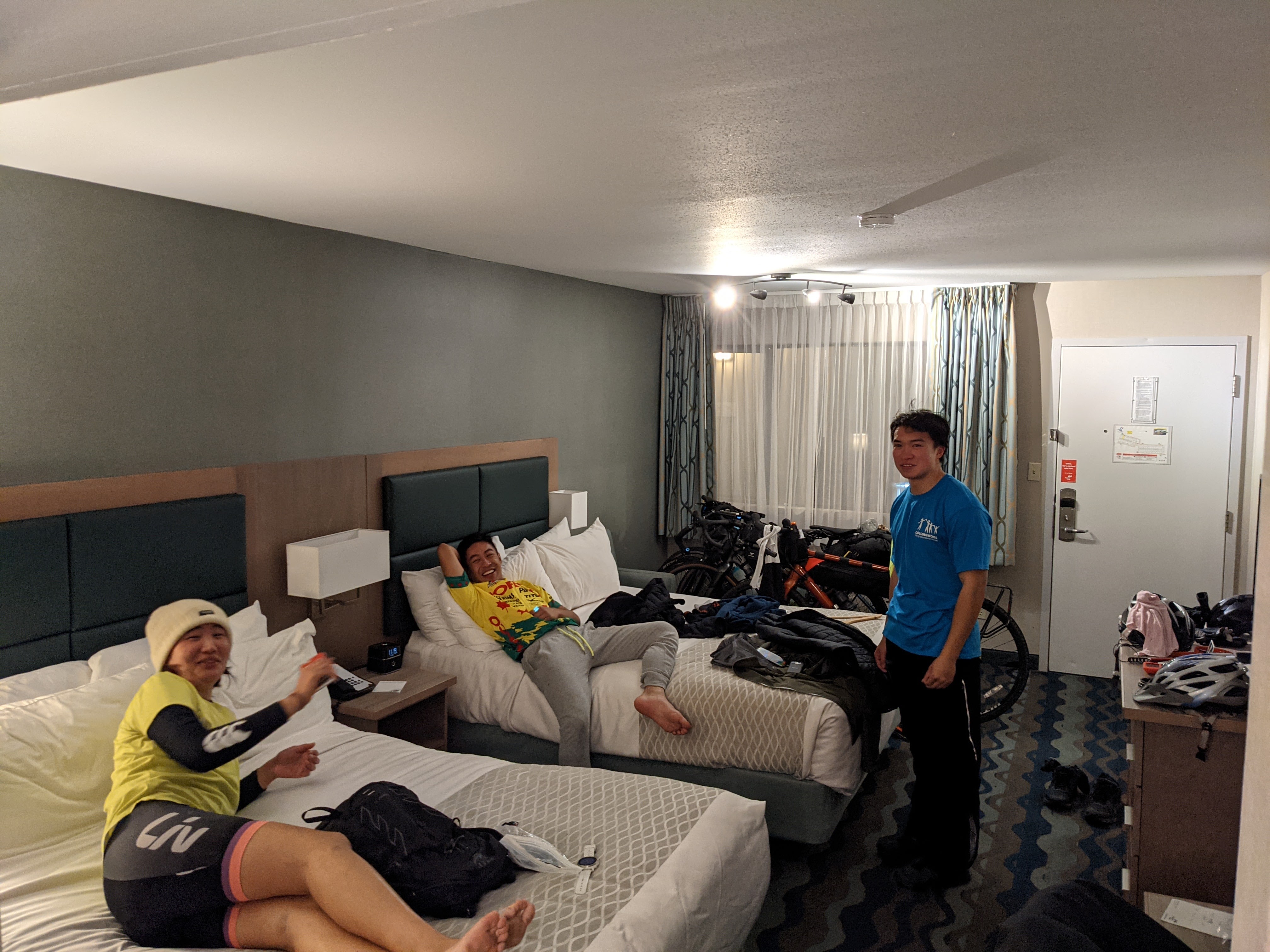 Going over all the events that took place on day 2

In the morning, Shu Yu’s son, Patrick, came to pick her up. He also brought some fresh baked cookies along for us (Thank you Patrick! <3). We left the inn, stopped at a cafe in Victoria for lunch, then cycled to Swartz Bay to catch the ferry to Tsawwassen. This is where Brendan would have his first tumble of the trip, he would go on to recover with haste and grace, almost as if it never happened. From Victoria, we followed the Lochside Regional Trail, a picturesque trail that leads to Swartz Bay. As we admired the scenery in Sidney, we realized we were running late for the ferry. However, as Chester likes to say, it’s not a classic trip to the Island without being late for the ferry and rushing to the terminal! When we reached Tsawwassen, we had the option of shortening our trip by taking a shuttle across the tunnel and transit. We chose to cycle all the way home, just in time for Thanksgiving dinner! While this was the end of my first trip with the VOC – it has served as the starting point for friendships and many more adventures to come in the future. What did we learn from this trip?

1. When Thanky says that “after this hill, it’s all downhill” –  take it with a grain of salt

2. Laundromats and gas stations are pit stops for some, but destinations when bikepacking

4. While it’s always fun to send it down a steep descent, it may be wise to ease on the pedals when your bike is loaded with bikepacking gear