Walking Meditation, Contemplation, and Reflection in the Lizzie area

It took till shoulder season to finally write up this trip report for a 4-day horseshoe loop up to Lizzie Cabin and along ridges to the Meditation/Battleship lakes area. Looking back on the summer, it was one of my favourite trips: a lovely, mellow hiking-scrambling traverse with great views, swimming, and wildflowers. 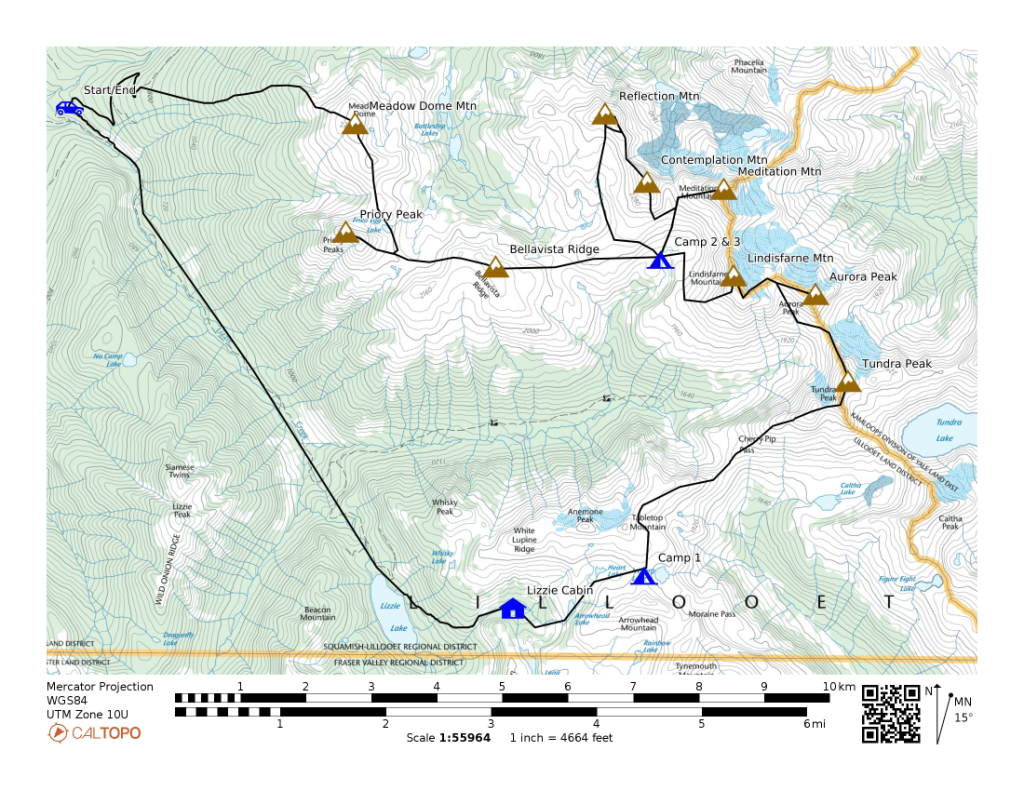 Map of the Meditation loop, starting up towards Lizzie Lake and returning from the Meadow Dome area.

The week before this trip was one for the record books: scorching heat, Lytton in flames, flooding of Lillooet Lake. Then again, as I’m writing this, the past week was headlined by flooding and mudslides. Like many, we needed a weekend of physical exhaustion and companionship in the mountains to escape from the world. This weekend provided just that and a re-invigoration of the joy of rambling in the mountains.

Driving alongside Lillooet Lake, the water lapped at the edges of the gravel road and we passed a couple of houses marooned as islands, their driveways and gardens flooded. We chatted about getting stuck up at Lizzie for a little while longer and didn’t mind the idea too much. The lower trail had grown in quite a bit and Caitlin & my legs soon discovered the stinging nettle (shorts). Luckily it sounds like the trail was cleared a few weeks ago (thank you!). Lizzie Lake provided us with a respite from the heat in the form of the first of many dips. Onwards and upwards, we passed by Lizzie Cabin (the now angular chimney does not seem to have appreciated the last couple of winters of snow) and continued up to the Arrowhead-Tabletop col where we camped for the night. 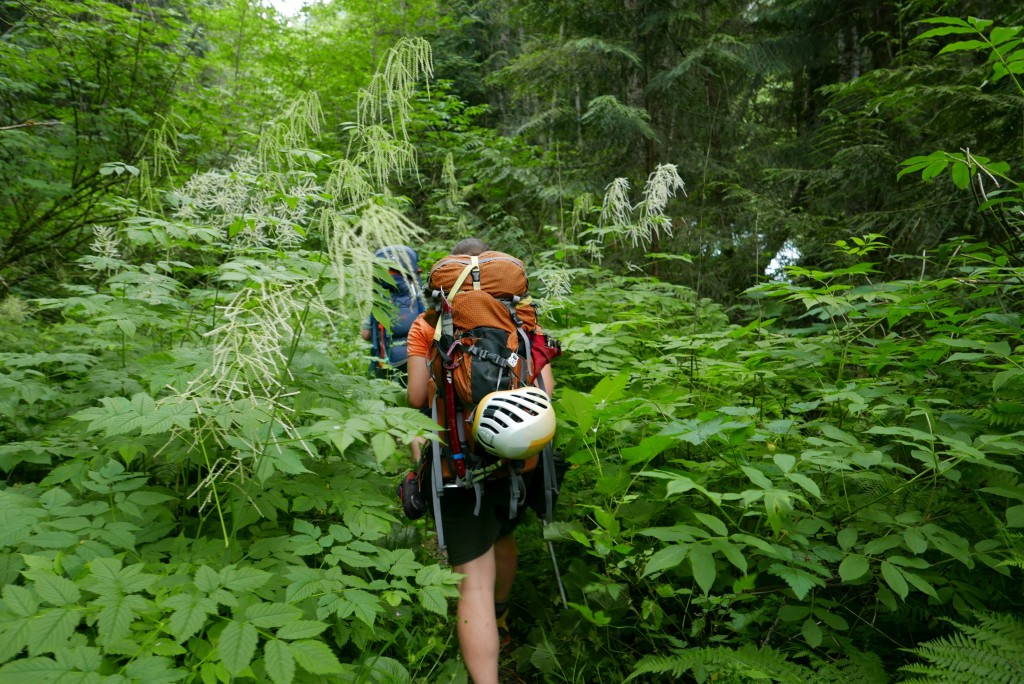 The lower-part of the Lizzie trail was more overgrown.

The second day started with a layer of fog and cloud in the valley, but not for long, as the sun’s heat dissolved the clouds. We descended to Cherry Pip pass, up and over the three summits of Tundra Peak and clattered down to the Aurora-Tundra col for lunch (pleasant scrambling with one short bit of exposure). 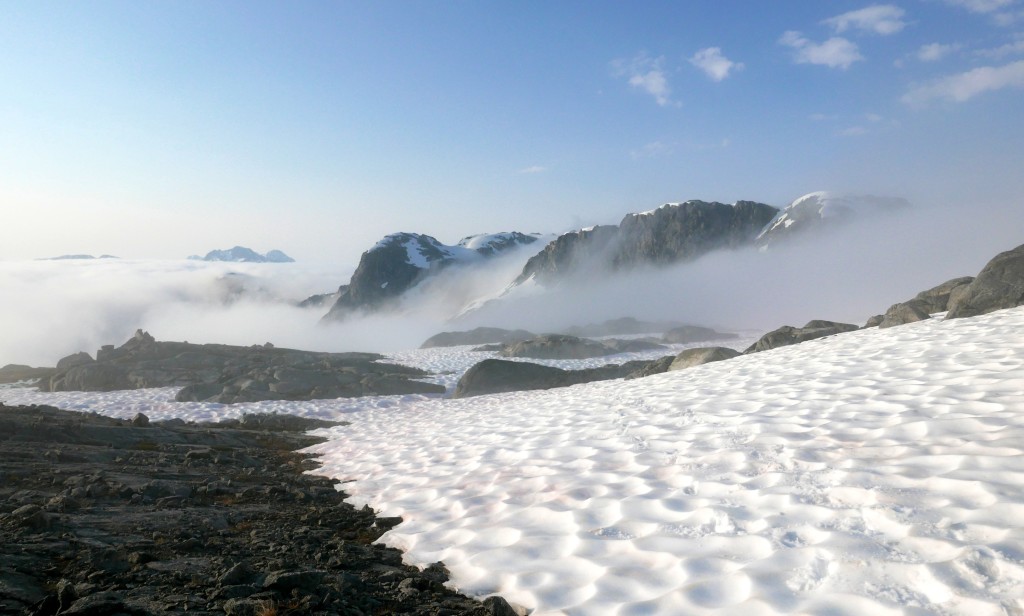 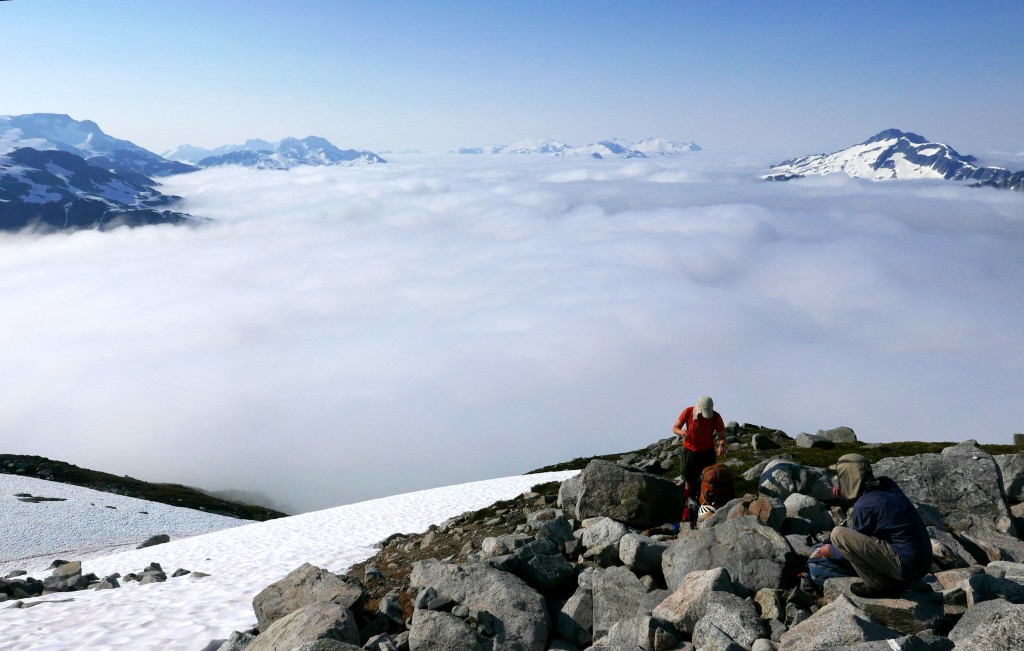 A sea of clouds. 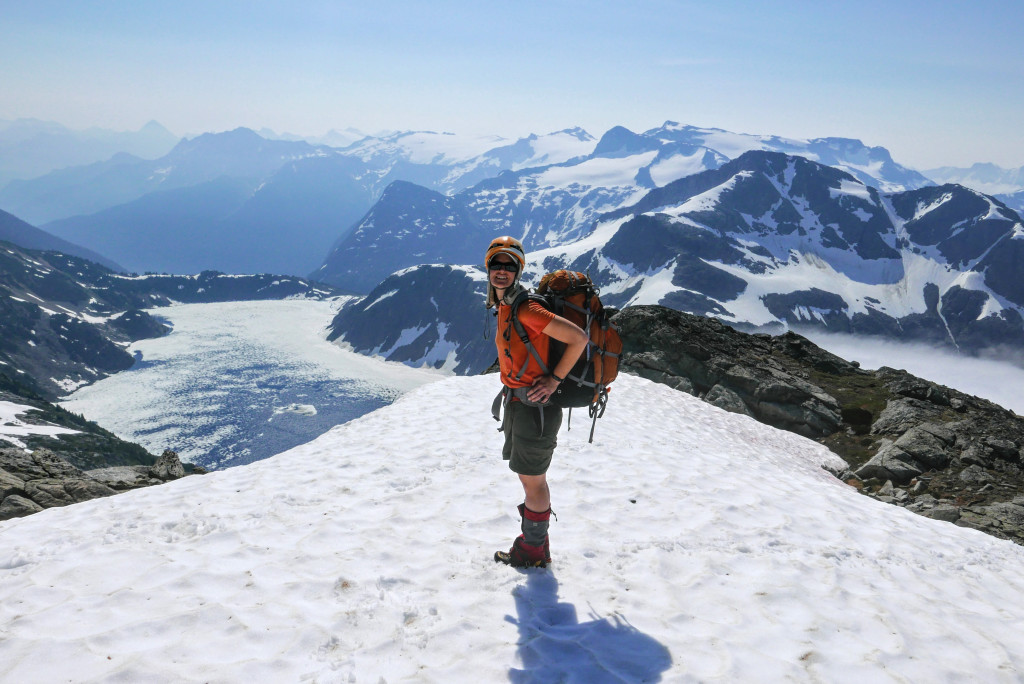 Caitlin on top of Tundra Peak above the partially frozen Tundra Lake with Caltha Peak and Skook Jim in the background. 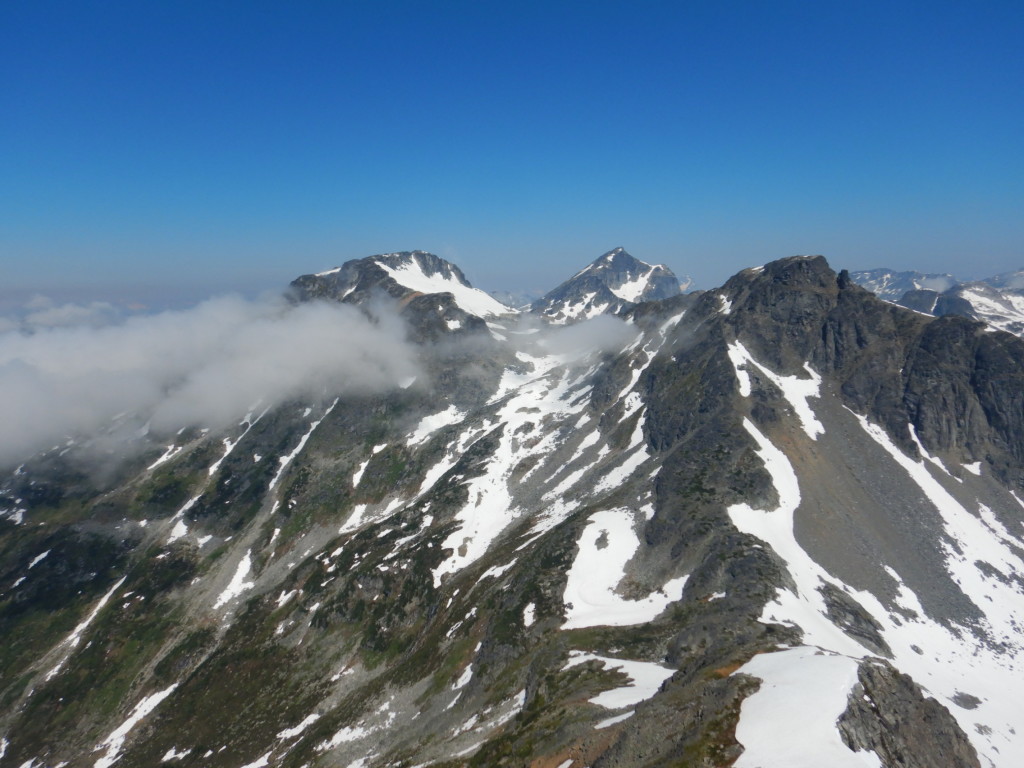 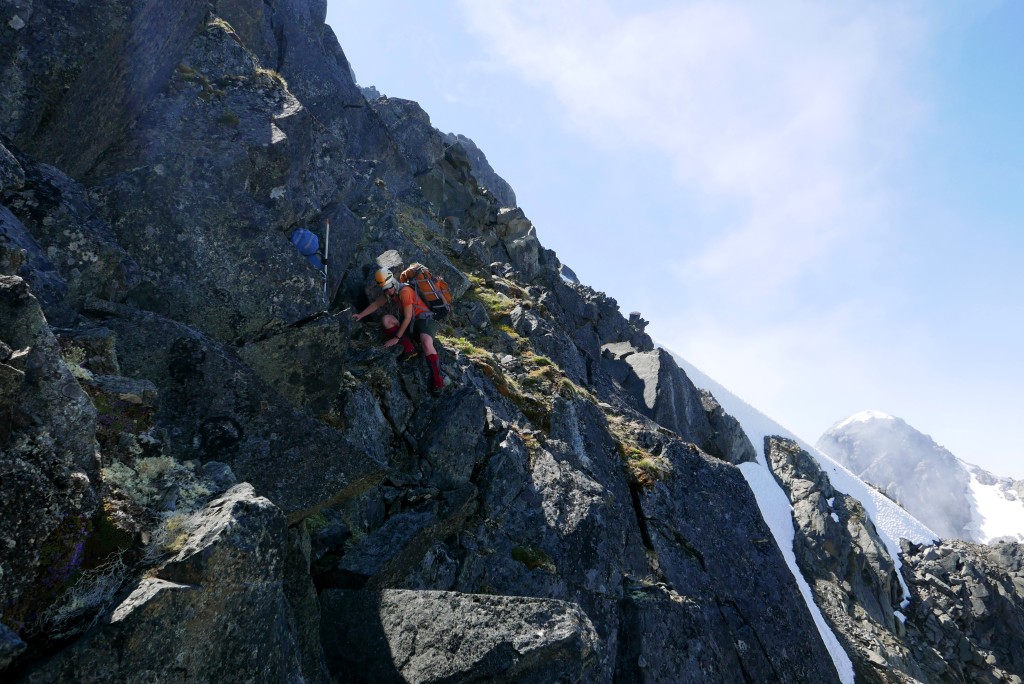 Caitlin clambering down one of the slightly exposed bits on the descent from Tundra peak to the Tundra-Aurora col.

With full bellies, we continued up to the Aurora-Lindisfarne col, dropped packs and walked up Aurora Peak. From Aurora peak, we could see all around the area and saw the remains of a slush avalanche on a nearby glacier. After this trip, I contacted glaciologist Garry Clarke to ask about it. He agreed with our idea that these are the result of a lack of firn formation leading to a direct ice-snow sliding surface in the summertime. Apparently “in many years on Trapridge Glacier we would experience an almost-glacier wide slush slide which looked similar to your photo but with very low surface slope. These were quite slow moving but you would not want to be swept along with them.” 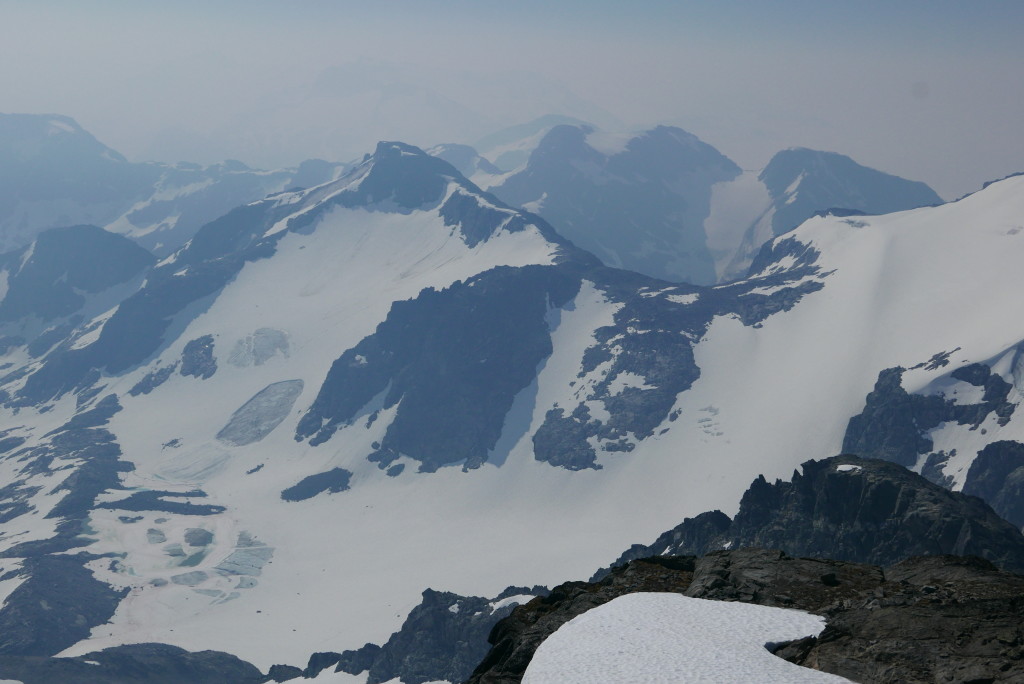 View of the remains of a glacier slush avalanche.

Back at our packs, we had the choice of some relatively loose and tricky scrambling up to the ridge of Lindisfarne, or to gain the ridge via a small glacier. We opted for the glacier and put on our crampons given the hard 40 degrees snow. Happy with our choice, we soon found ourselves on the top of Lindisfarne, lounging and admiring the view. Ready for dinner, we followed a pleasant ridge down a few hundred meters to an alpine meadow nestled between Lindisfarne, Meditation, and Reflection peaks. With the past week’s heat and associated snow melt, creeks overflowed their banks flooding the heather meadow and what is probably usually a mud pit swelled to a pleasant (and reasonably warm!) swimming tarn. The alpine meadow was covered by a small web of eroded trails that looked from a distance much like ant tracks around a nest. As there were no trails in or out, these were presumably from a heli-camping site. Satisfied from a full day with tired legs, we once again went to bed before the sun set. 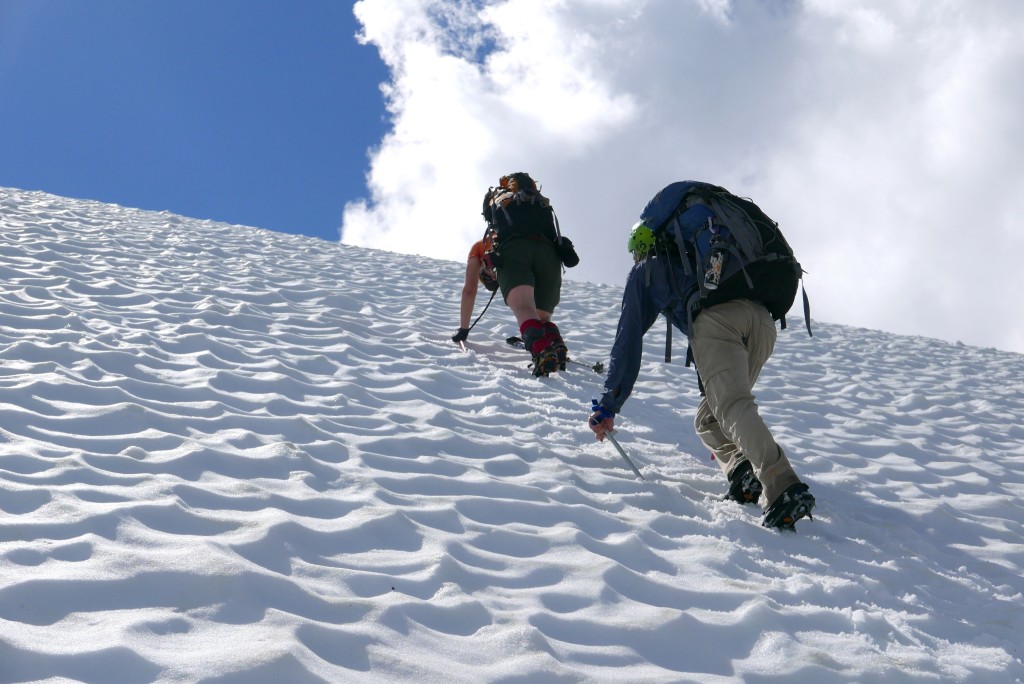 Taking the nice snow (glacier) ramp up to Lindisfarne. Caitlin lounging on the summit of Lindisfarne We awoke just after dawn to morning fog which gave rise to a sunny day. We left our overnight gear at camp and unburdened by its weight, spent the day scrambling around the rocky ridges, heather meadows, and up the surrounding peaks: Meditation, Reflection, and Contemplation. As we climbed up above camp, our noses and lungs filled with the smell of wildfire smoke, likely from Lytton. The clouds that blew in and out helped scavenge some of the particulate matter to clear the air enough to continue hiking. The night before we left on this trip, we heard the very sad news that the town of Lytton was caught by a fire. In some ways, the story is like a horrible myth. The first day was the hottest day ever. The second day was even hotter. And on the third day… the town burnt down. Lytton and the Stein Valley Nlaka’pamux Park are incredible areas. We have been lucky enough to visit occasionally over the last few years and met some wonderful residents including a kind woman who gave us a ride from the Greyhound station and a hilarious 8 year-old serving milkshakes (and imitating a grumpy customer to us). Several months have passed and Lytton has slowly started to rebuild.

We went up Meditation, back down and up steep heather slopes that made us debate taking out our ice axes, and on to Contemplation. The ridge down from Contemplation had some large loose blocks but was straightforward otherwise. Then we went up one sub-summit of Reflection, discovered that the way to the main summit was blocked by a tricky notch, and retraced our steps instead to scramble up a loose boulder field to the peak. It was a long walk back to camp for a pleasant evening of swimming, eating, and chat. Spot the Vincent in the heather meadows. 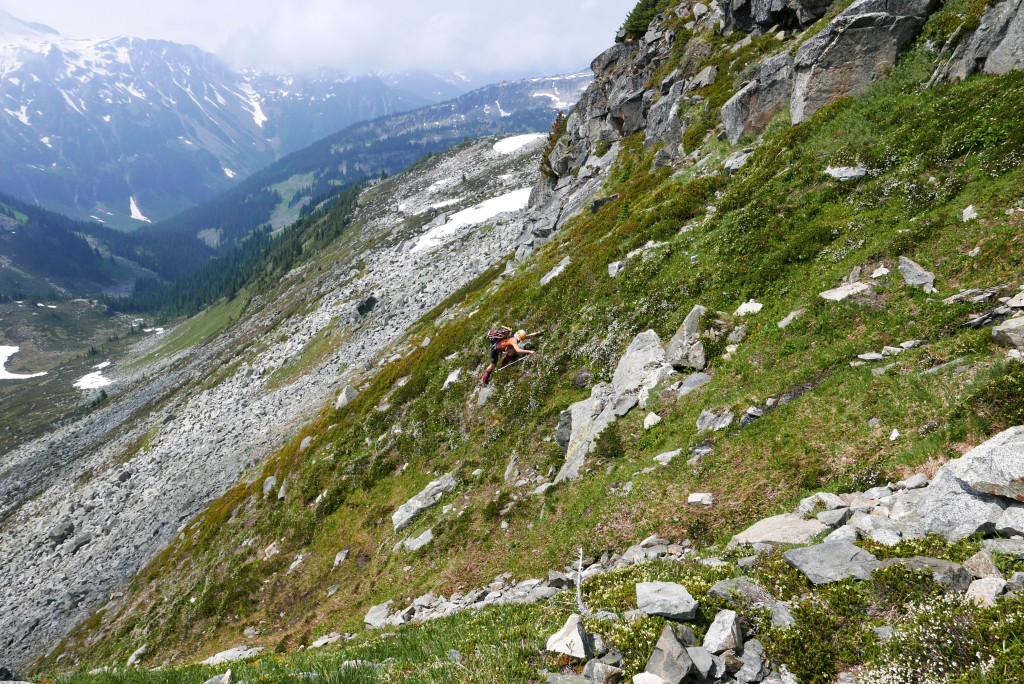 Debating to bring out the heather axes. Ridge rambling on the way to Reflection. The purpose of our day, “Contemplation”, “Meditation”, and “Reflection.” Yes, we do all have matching dork hats. View of some of the peaks that we visited this trip with the scenic ridge that connects them. Vincent, Caitlin, and me (Birgit) on top of Reflection with Meditation, Lindisfarne, and Contemplation in the background from left to right. Descending back to our camp in the meadows with Lindisfarne and the ridge we came down when we first got to camp. You can see the web of heli-trails in the bottom right.

Overnight, the smoke settled in and the views were obscured by haze. For our last day, we followed Bellavista ridge (ironic isn’t it given the haze?) and dropped across to meadows where we left behind our overnight packs for a side trip to Priory peak. Most of the ascent is a walk up, but the last bit before the summit has a tricky notch to descend into and the other side of the notch are grit covered slabs with just enough vegetation to be alright. The skies cleared of smoke, and after making it to the top, we quickly descended with only a few pauses for Vincent and Caitlin to admire the plants, including the very cute Sedum divergens. Hazy morning skies from Bellavista Ridge looking back towards our main area: Contemplation, Meditation, and Lindisfarne. Looking down towards the Battleship Lakes area from Bellavista Ridge. At Fried Egg lake we paused for a lovely swim and continued up to our last summit — Meadow Dome. From the top, we fantasized about reducing the amount of logging road walking. Caitlin persuaded us to follow the descent from a 1992 trip report instead of a longer, but possibly better route. To be fair, the route had a lot going for it, in particular its directness: it was only 2 km distance (and 1.5 km elevation) to the logging road. A minute after starting our descent, I stepped into a hole covered by a branch and hit my shin against a sharp rock. Much cursing ensued and I ended up with a nasty bone bruise that made me glare at anyone who might try to touch it even two weeks later, but this was only the start. As soon as we entered the real forest, the mosquitoes swarmed. They were vicious, trailing us. Not long after, the horseflies joined in on the fun. At least for a bit, we could try to outrun them. But Caitlin’s revenge was cruel. From about 1700 m to 1300 m elevation, the forest looked like… well imagine the gods playing a game of Mikado with pine trees. And every patch of ground between the stacks of trees is filled with the ever-so-friendly undergrowth of a swamp of devil’s club. We teetered on top of the trees, I cursed my frequent mistake of wearing shorts, and we took 4 hours to cover 2 km. At one point, my GPS showed us as having covered about 200 m in half an hour. Turns out that between the 1992 trip report and present, the pine beetle epidemic did some landscaping. Priory Peak from part way up Meadow Dome. Bellavista ridge is the ridge in the middle-left. Starting our descent to Lillooet Lake from the top of Meadow Dome. If only the whole descent looked like this…

After four long and satisfying days, we were all remarkably foot sore. Caitlin had the most reasonable excuse: she was wearing in a new pair of mountaineering boots. We all tenderly hobbled down the last 1.5 km of logging road back to the car and were glad to see the water levels dropped on our return drive. All in all, a very successful way to spend four days: 8 peaks, lots of elevation, and lovely times.

Photos by Birgit unless mentioned. For more pictures, see here: https://photos.app.goo.gl/BiDBB3cTJzTrd2J38
And for details about the road / conditions and our track, see bivouac: https://bivouac.com/TripPg.asp?TripId=9225

2 Responses to Walking Meditation, Contemplation, and Reflection in the Lizzie area