Posted on December 8, 2021 by Melissa Bernstein

the abridged version: some skied, some attempted to ice skate but ended up hiking in the snow, then there was hotsprings and a fire and a pork loin that was on sale and seared and songs and spiked hot chocolate and then more hotsprings. good times! 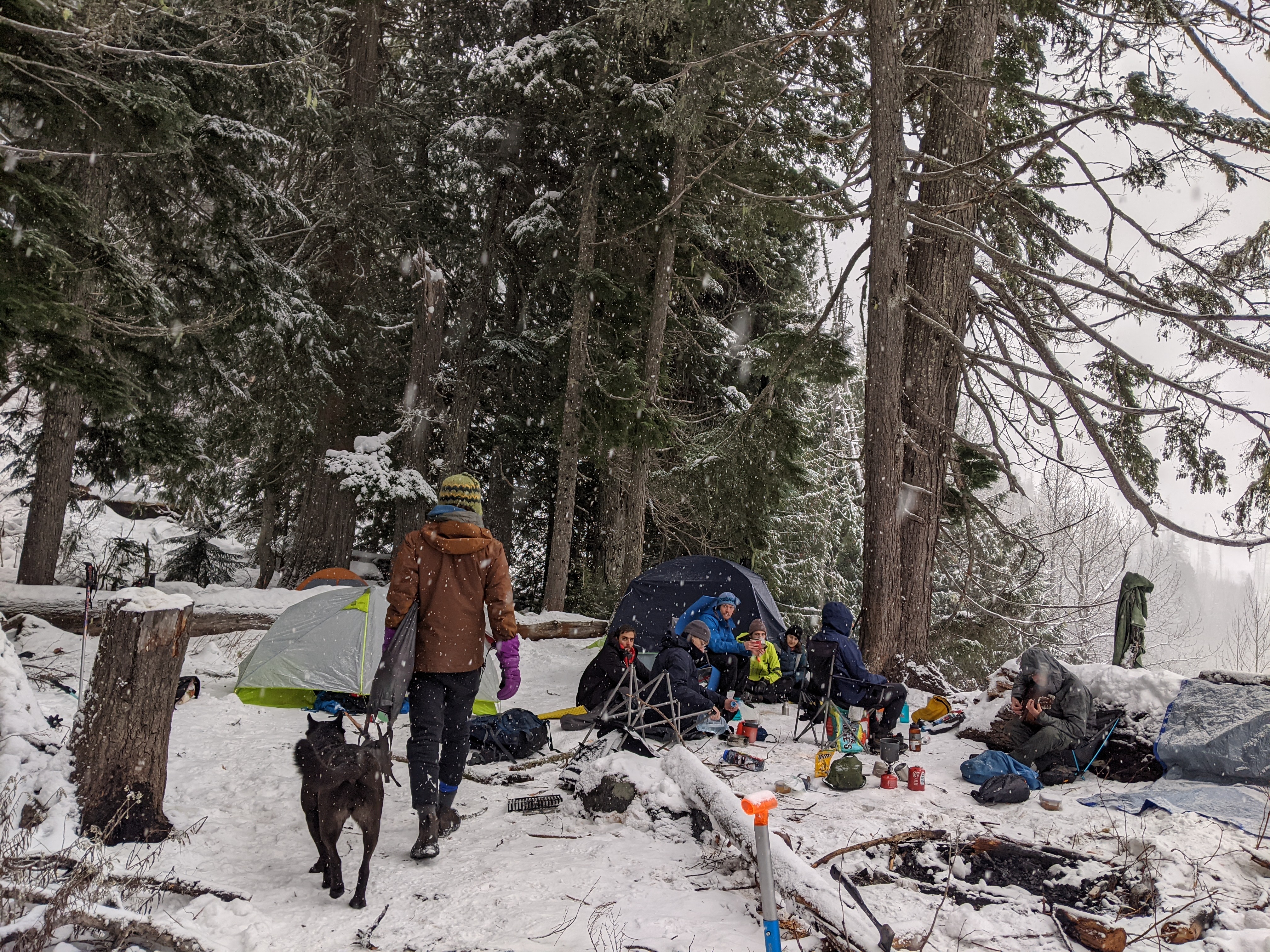 Heading back to camp after a morning of hotspringing. Photo by Melissa

Instead of the chaotic Brew Debacle, a few carfulls of VOCers, organized by the one and only Hannah Bates, planned an expedition to the Cayoosh ski area for a full weekend of touring followed by a stop at Sloquet Hot Springs. Well those plans fell through when the area was hit with major rainfall and landslides washed away access to the Duffy Range – where Cayoosh basin is located and access to the Sloquet Hot Springs. And then there was hope of ice skating conditions so the trip switched gears into skating then hot springs at Keyhole near Pemberton. But unfortunately the skating fell through but the stoke and soak was still there!

Our trip took place and travelled through traditional, ancestral, and unceeded territories of the Musquam, Coast Salish, Squamish, Lil’wat, and St’at’imc First Nations (native-land.ca). I am grateful for the beautiful land these people have lived on and thrived on for generations before folks like myself came to explore and live.

A few of us – myself, Kai, Alex, and Thomas – really wanted to ski despite the changes to the itinerary. So we did that first. We summited Metal Dome! It was my second time summitting something on skis – the other time being Mt Mulligan last season. The visibility was garbage up top and the sleds (snowmobiles) were overall net neutral in my mind (smelly, annoying to let pass, noisy, cut up the slopes, but did make for make for fast skinning) but the snow was pretty good! The last 1km to the summit was almost a full white-out. We had to stay close together and follow Alex’s GPS track on his phone. I was barely surviving off peanut m&ms. The last 50-100m elevation to the summit block was excruciatingly tiring as we switched to A-frame and bootpacked up the windy-swept icy slope to the peak. Well, all except Alex. He is in the masochistic boat of always skinning no matter how hard. The visibility at the top was almost nonexistent. I swallowed a handful more of m&ms, chugged some gatorade, and we headed down. The mellow slopes above the snowmobilers torn up slopes and the summit area were perfect “dust on crust” ski conditions. Lots of pow and stable conditions. It was so much fun skiing, though I did fall a few times. The guys were great to ski with, sticking for me when I was struggling or falling behind (shoutout to Thomas, thank you)! Alex jumped off some pillowy cliffs. It was entertaining! and Black Tusk was in the background (see below). For my first ski of the season (and on new skis!) it was a great time.

Myself and Kai getting ready, car camping style. Photo by Alex

Skinning up around treeline. Photo by Alex 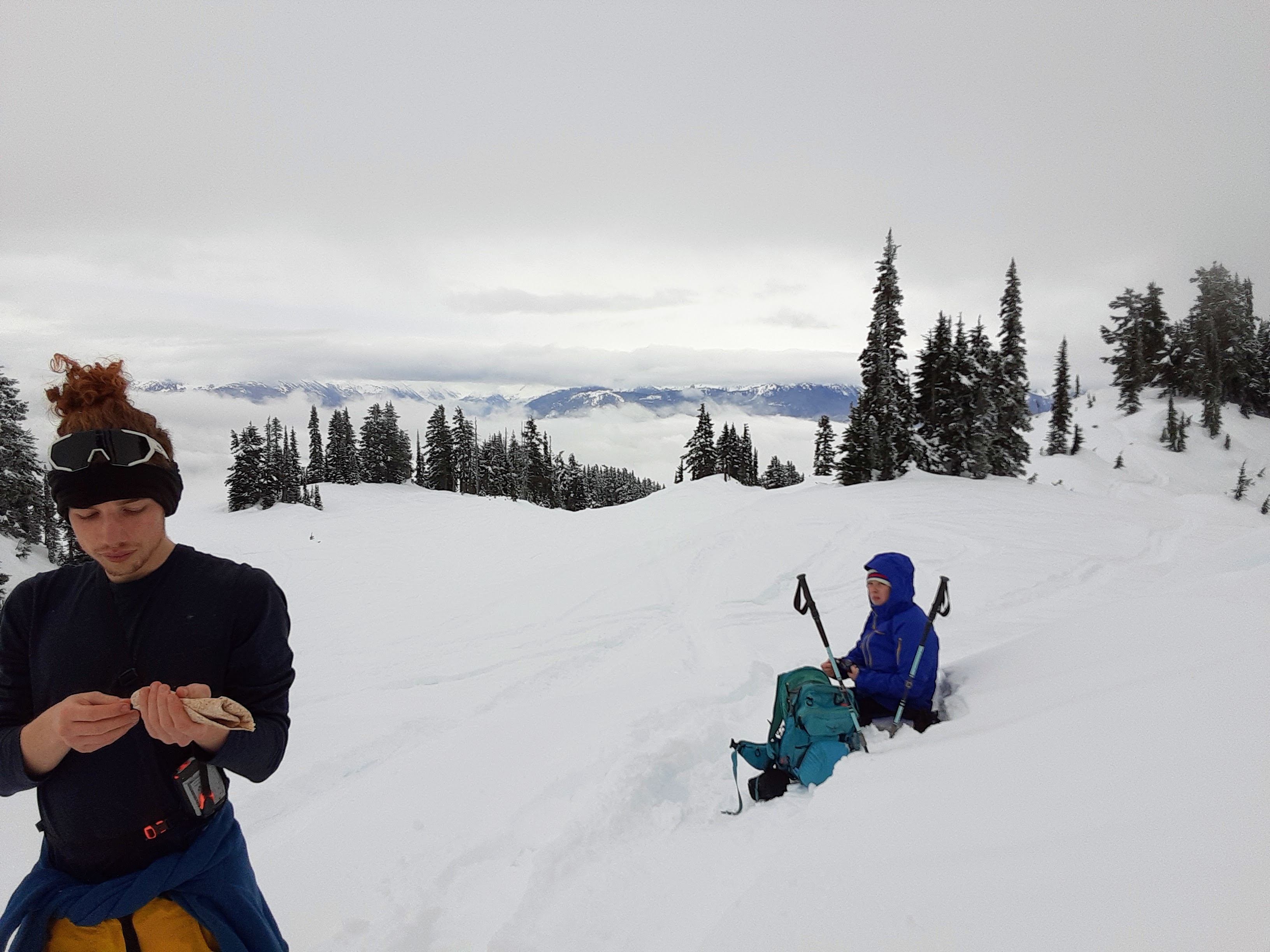 Lunchtime. Here, I’m unsuccessfully consuming enough calories to get me through the rest of the day. Still did it though! Photo by Thomas 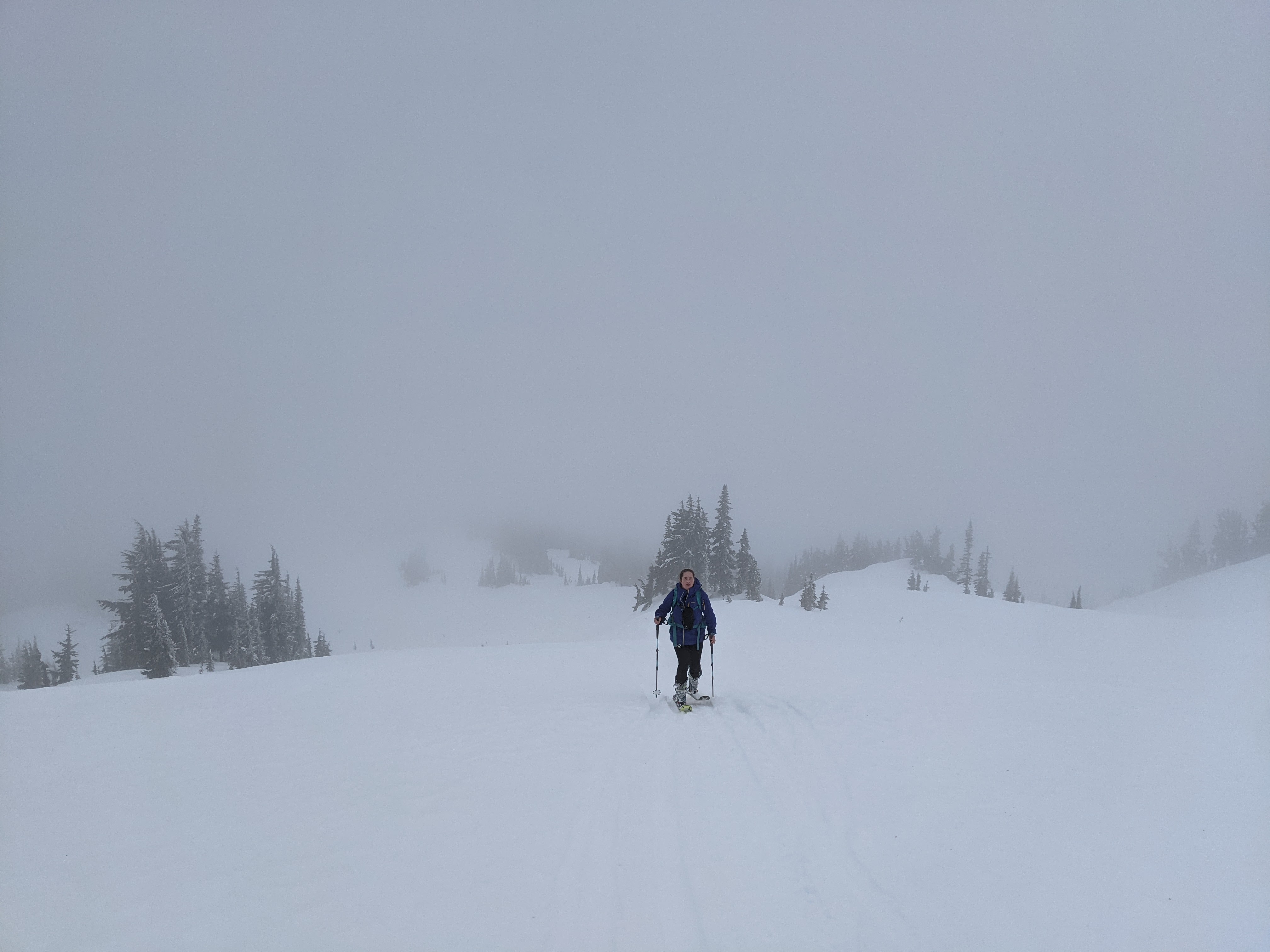 Just about where we decided to bootpack. Photo by Alex 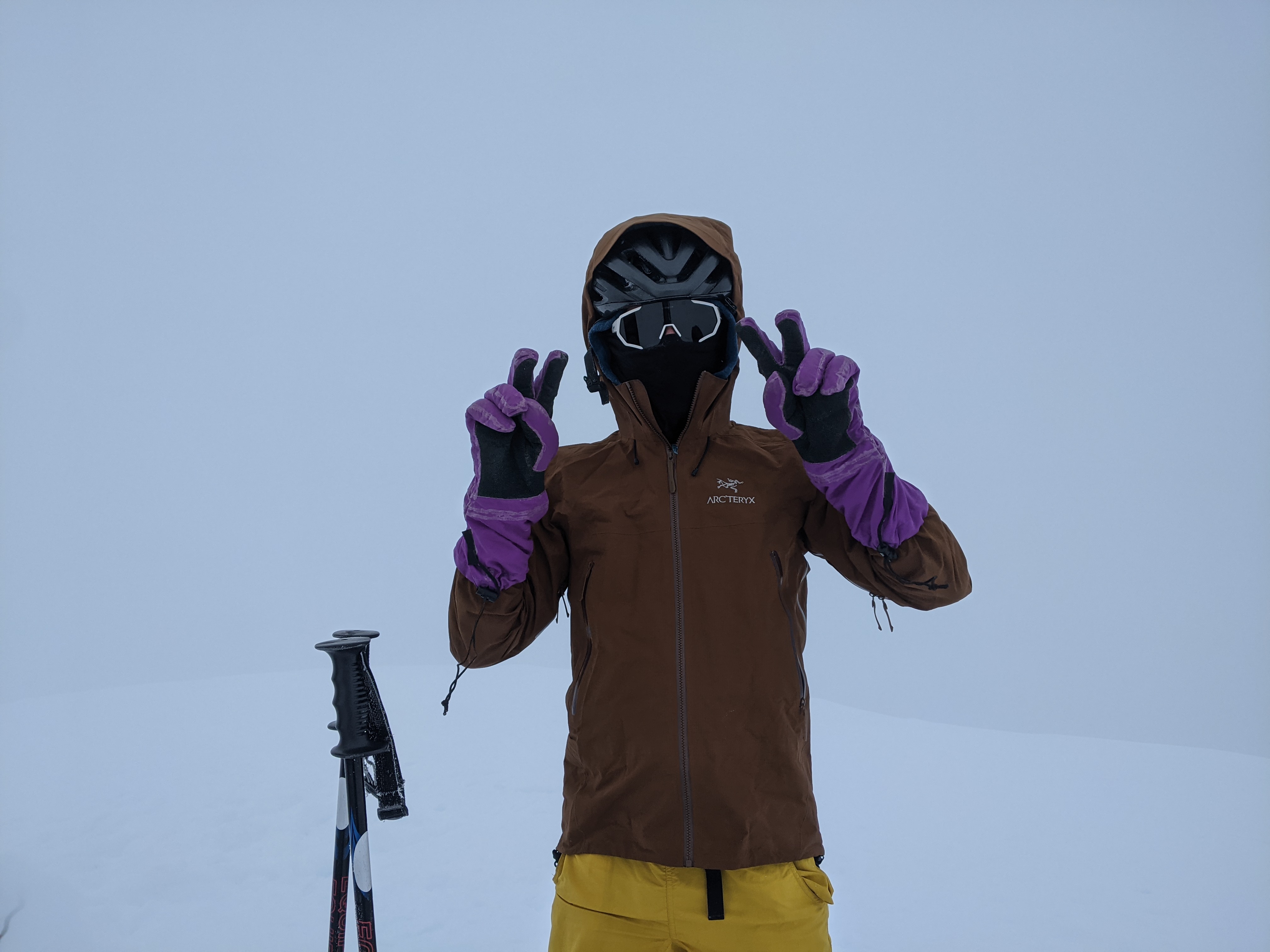 Alien man Kai at the summit. Photo by yours truly 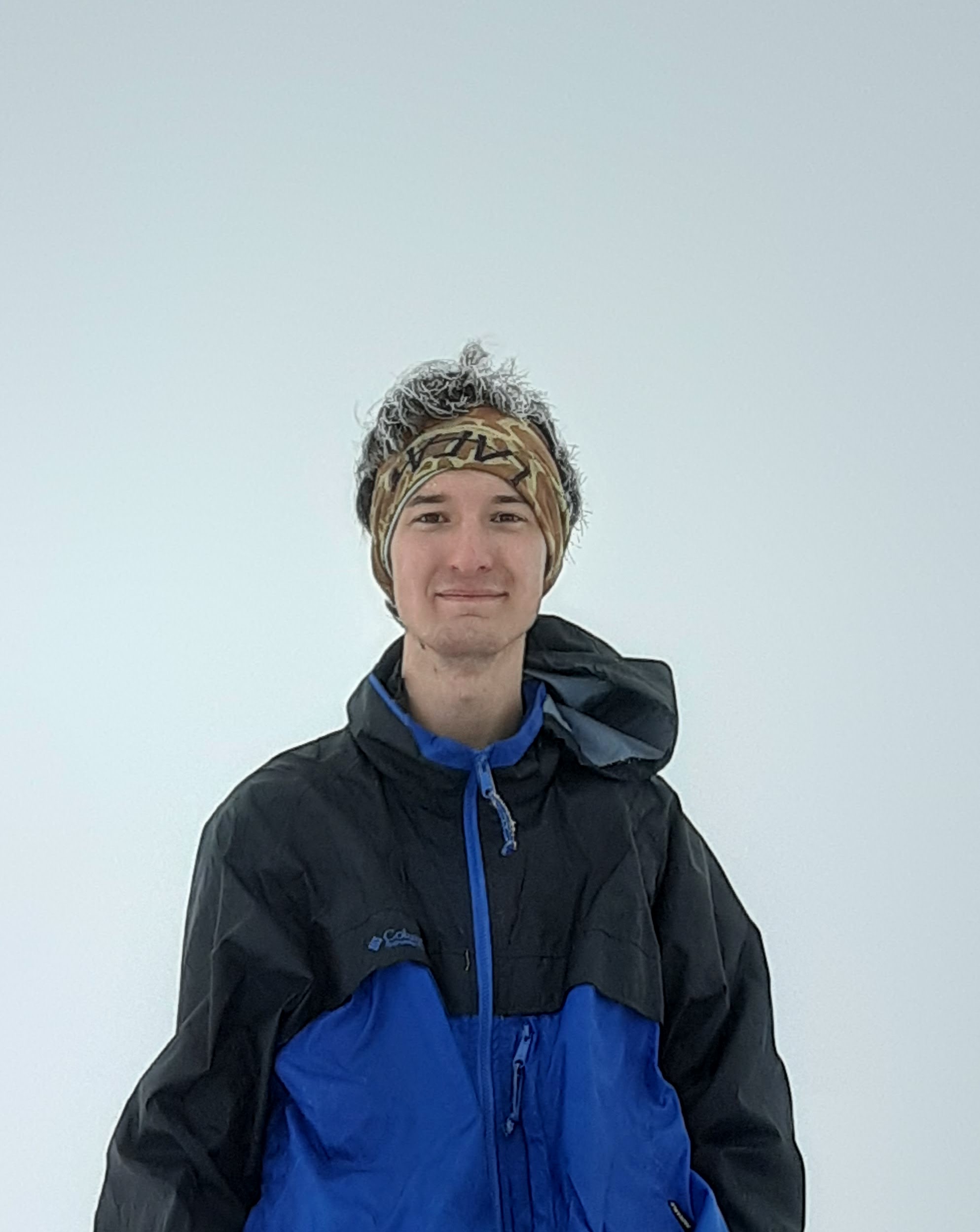 Photo of Alex by Thomas 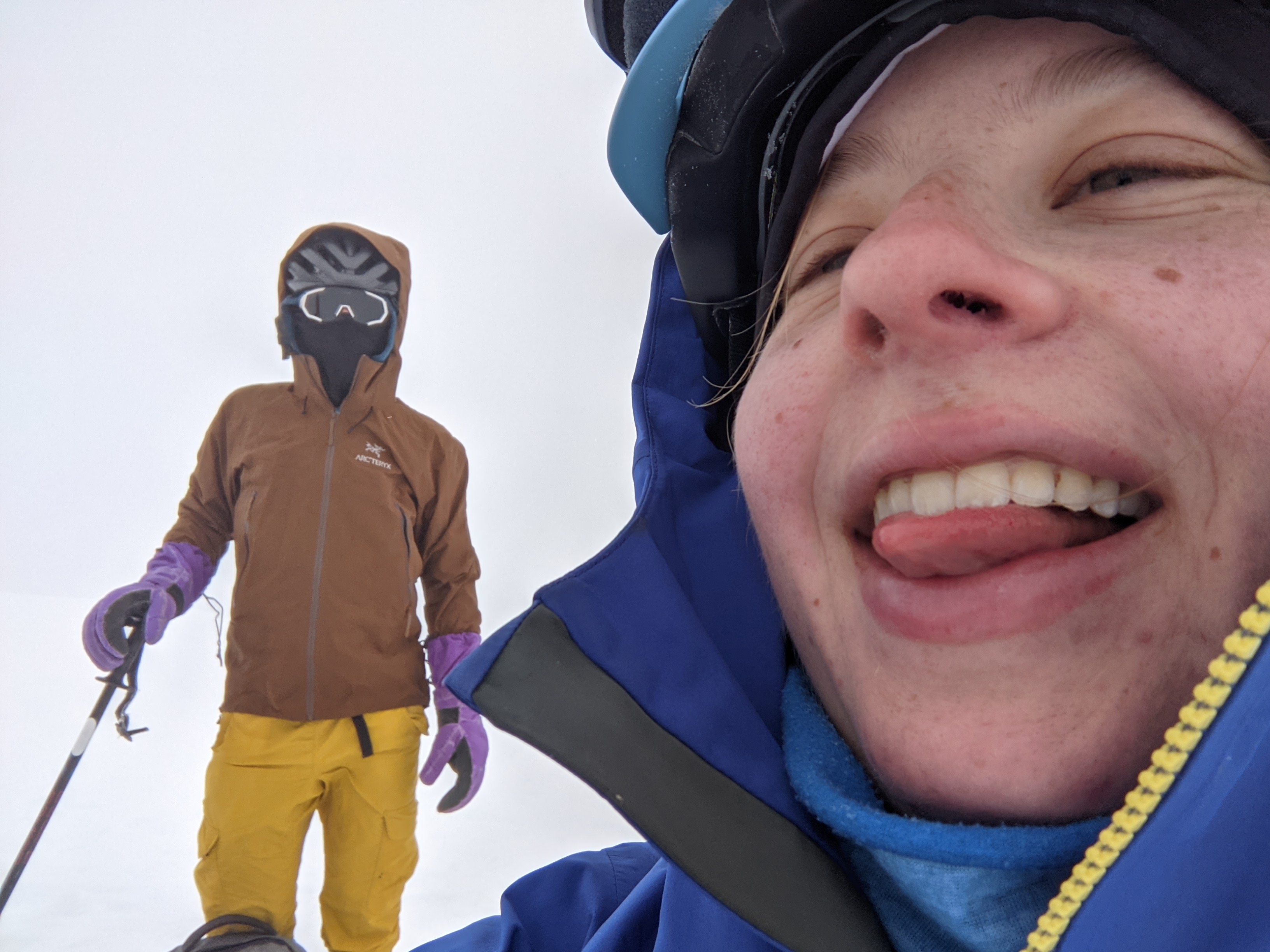 Super attractive roomie selfie I might regret posting later. Photo by me Alex and Kai before skiing off a steeper slope. Photo by Thomas Alex prepping for opening weekend with UBC Ski and Board club. You can see him jumping off the pillows on the right. Photo by me. I think there’s black tusk somewhere in the background. 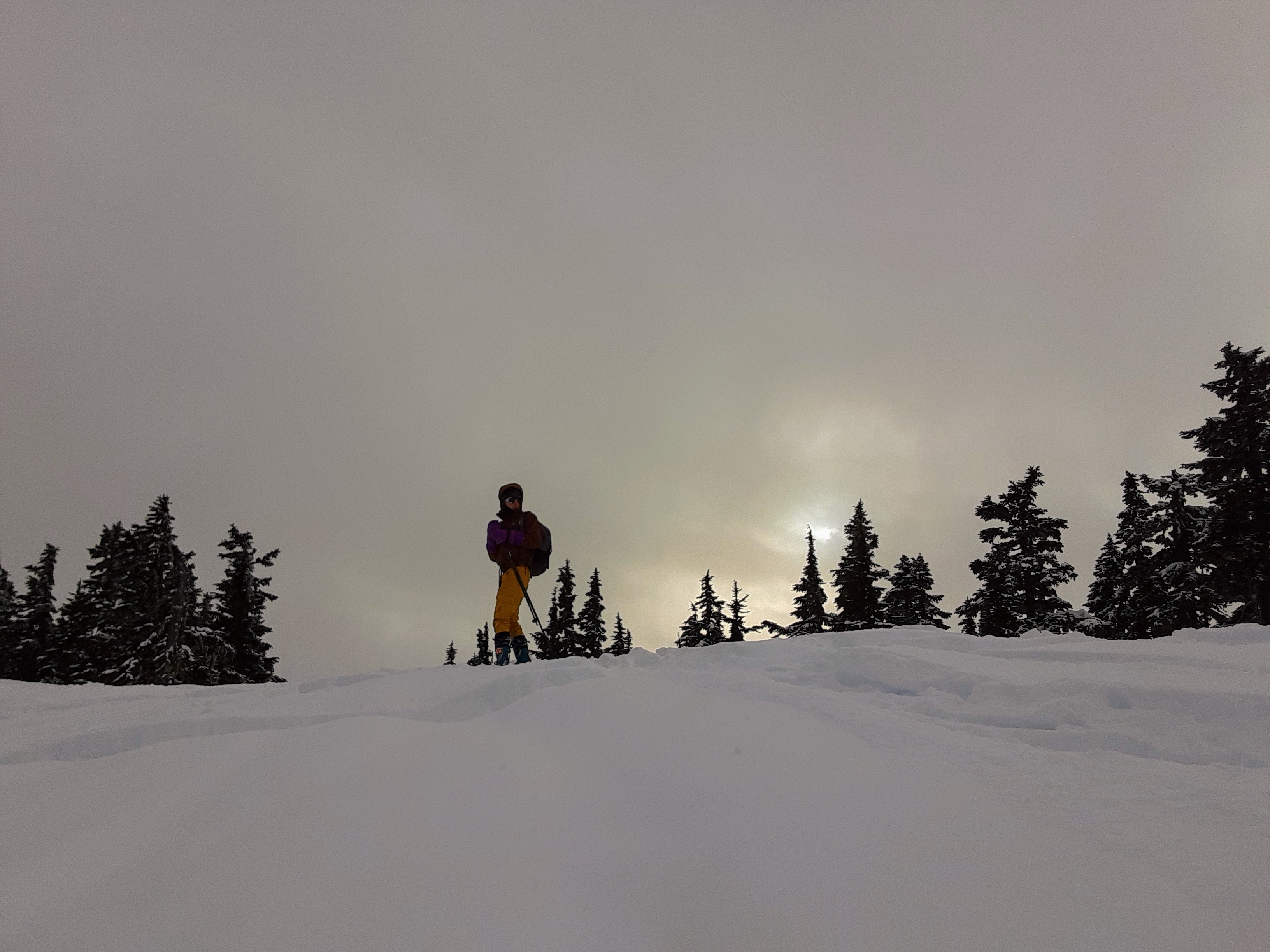 A spekle of sunlight illuminating Kai. Photo by Thomas 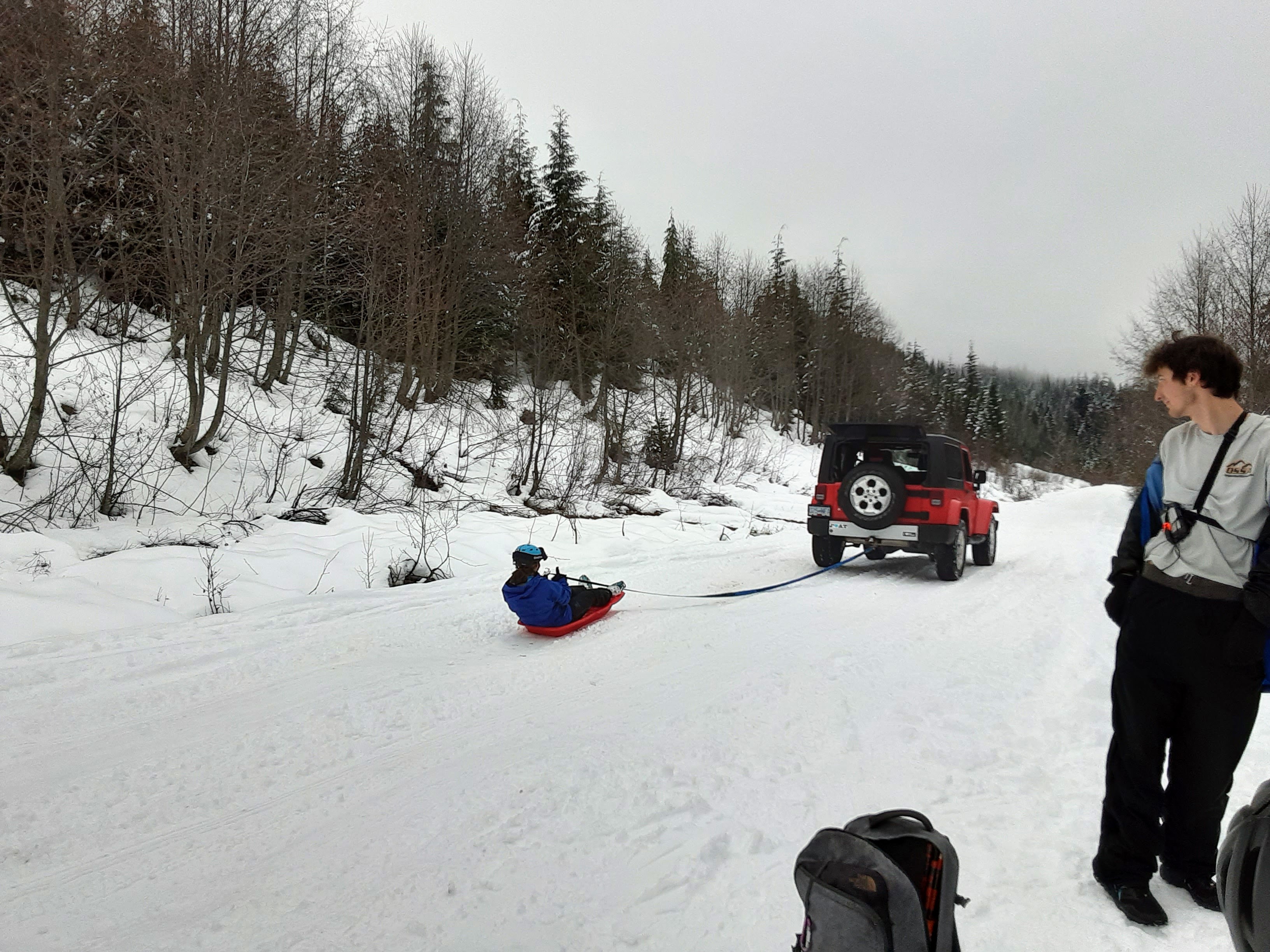 The other cars were unsuccessful in skating as One Mile Lake in Pemberton aka “pemby pond” was not frozen. So they hiked Nairn Falls instead. Then they went to Keyhole Springs where we met them later in the evening. Here’s some photos they took. “No, the lake is not frozen yet”. Photo by Rachel 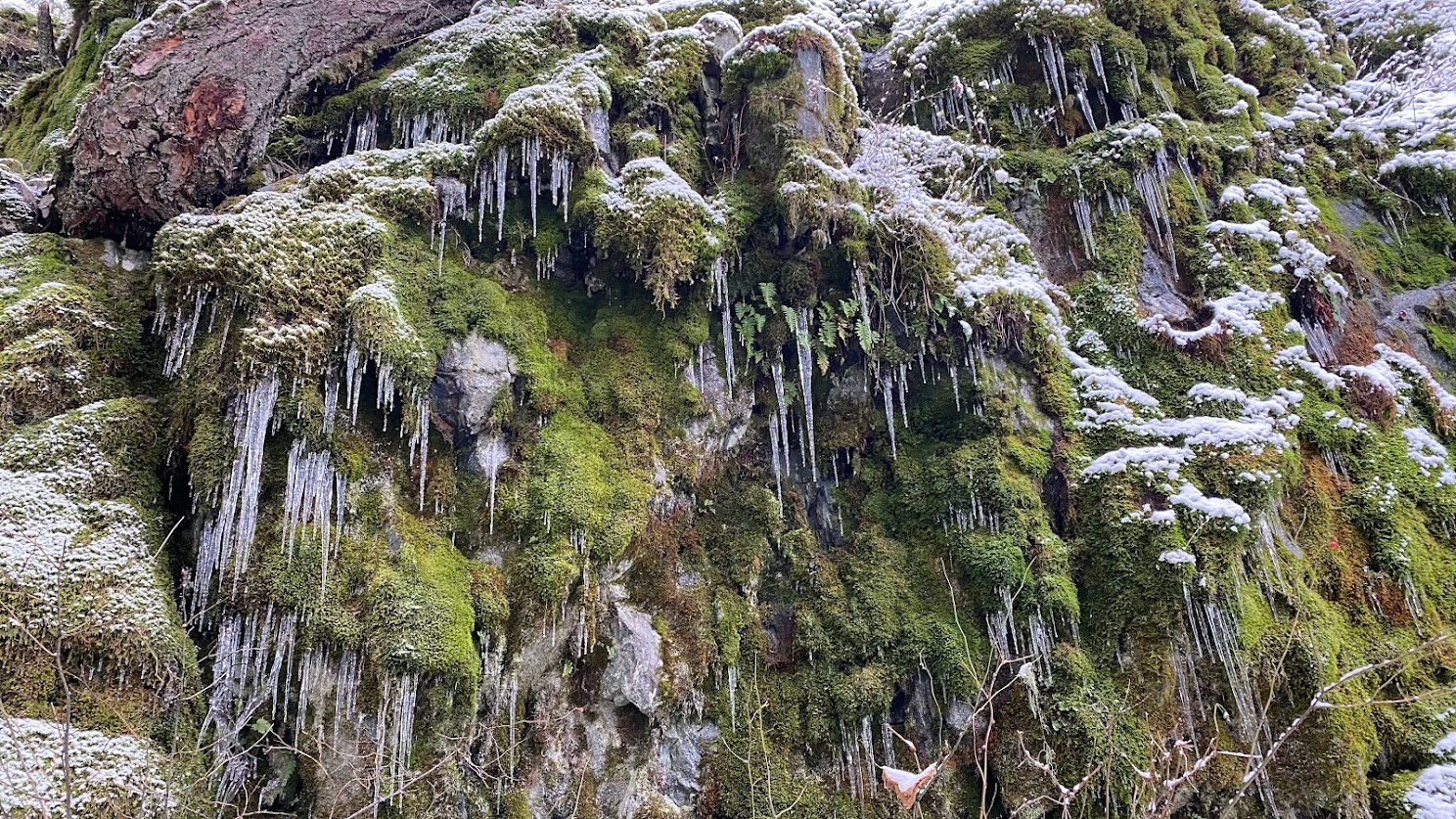 Greenery on the Nairn Falls Hike. Photo by Siddharth 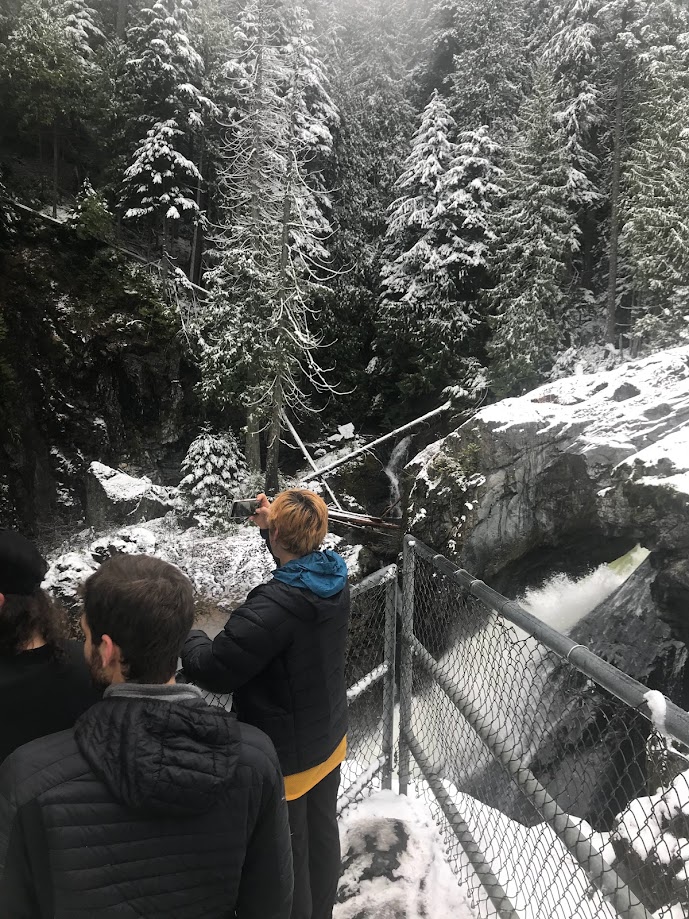 Stoke even in a popular “touristy” hike! VOC trips are for everyone 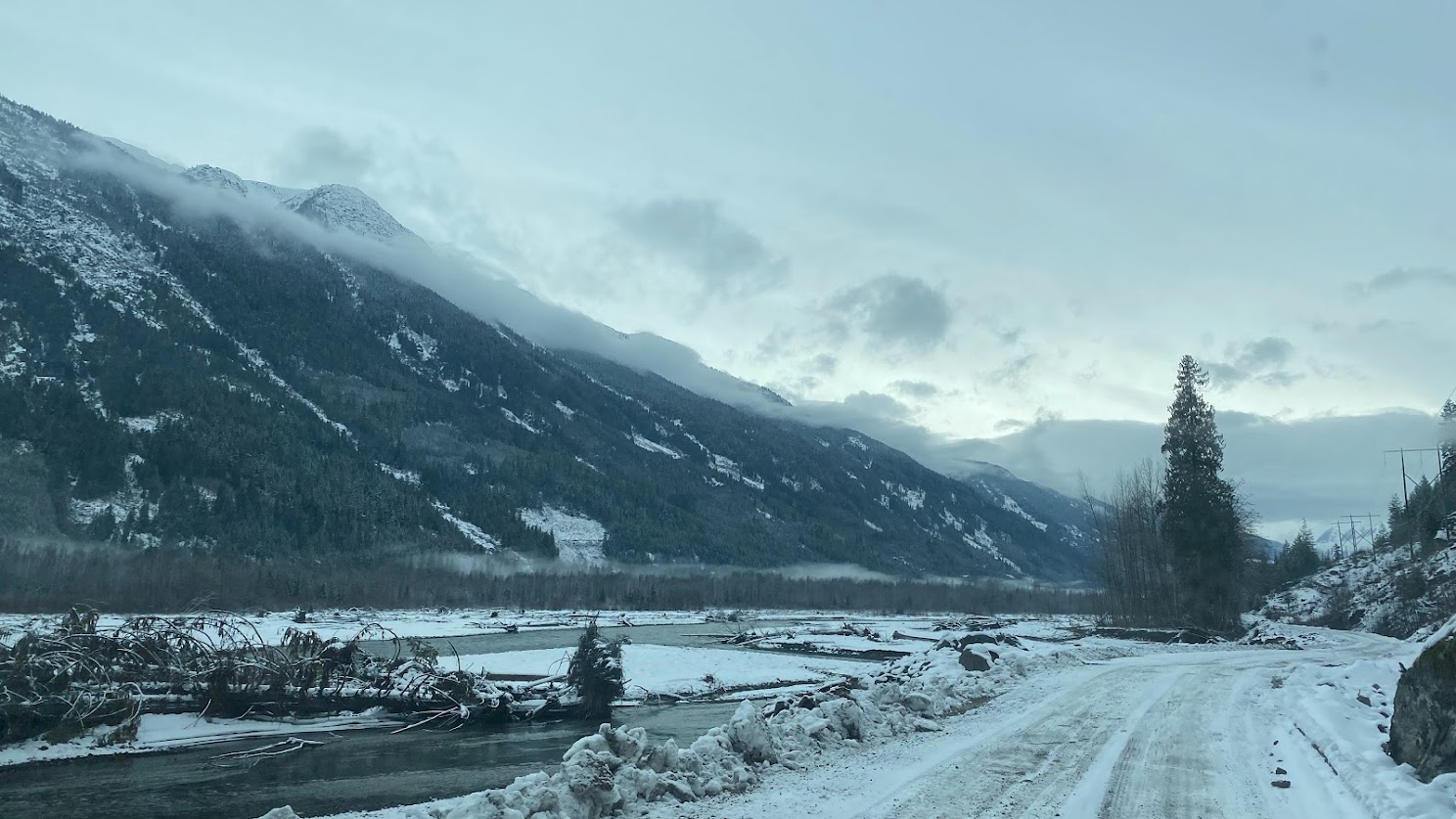 Hiking into the hotsprings. Photo by Siddharth <now the photo diaries merge as my group arrived at camp> Kai crossing the very stressful and icy creek crossing. We should’ve worn microspikes… Crossing this creek required extreme focus as it was slippery and slightly downhill with freezing cold rushing by fast and loud underneath you. I felt “in the zone” for the first time in a while. Photo by Melissa IKEA themed meal with Kai – fried meatballs, mashed potatoes, butter, cheese, IKEA sauce packet, and a blue bowl. IKEA is up there in my favorite stores along with MEC/REI, Trader Joes, Persia Foods, and Facebook Marketplace. Photo by me and sponsored by MSR cookware. Singing around the fire. Bringing extra VOC songbooks would’ve been a move. Photo by Siddharth Morning hotspringing. Note: we had a dog on our trip, Nika (Ben’s dog)! Photo by Thomas

A note on beta to Keyhole Hot Springs. We drove up the 41km ish up Lillooet FSR ignoring the sign near the turnoff for the Hurley FSR that the FSR was closed at 17km. It was fine. Alex navigated the pools of water very well, and the snow – thanks Alex again for driving! Oregonians do know how to drive in snow. Ok, so when we got to the end of the road, there was a parking lot to the left and a spur (offshoot of an FSR) to the right. Hiking from the parking lot straight down the narrow path would lead you to the hydro facility, but that would make your whole trip longer and likely involve some postholing (refer to Steven Song’s peakbagging blog post). So we decided to drive about 1km up the right spur to a large pullout area. You could definitely hike this – most cars did. The whole FSR is mostly flat and even the spur wasn’t that bad. The trailhead was there on our left. No outhouse at the trailhead – Gaia GPS lied :(. Then it was about a 2km mostly flat hike into the hotsprings, with our campsite being about 1.5km in I’d estimate (say in the comments if I’m mistaken). Poles are definitely recommended and microspikes too on the trail. Snowshoes would be helpful is there is fresh snow. I wouldn’t recommend skis though we did see some people at the hotsprings that had A-framed ultralight setups to their fancy Dynafit covered bodies. I don’t know where you would ski in a narrow and mostly flat trail… Oh well. I had difficulty hiking as I hurt my right (dominant hand) skiing earlier in the day. But Kai stayed with me as I tried not to slide down the slippery path (bless). The major creek crossing was sketchy, I’ll just say that. Microspikes and poles and brain power is necessary. From our campsite to the hotsprings was slightly downhill. The last section is pretty slippery but if you have good traction and hug onto trees or slide you’ll be alright. At the valley level, there are two shallower pools to the left. There is a hidden and top secret camping area that can fit a 4 person tent or 2 tight 2 person tents near the two pools. Don’t tell anyone. Jk. What’s the point in keeping natural public resources on the down-low when they are for everyone? Isn’t that exclusionary and reinforcing generational knowledge power of certain populations of backcountry users over other? Ok so then you want to turn right to get to the actual person-made pools by some awesome volunteers a handful of years back. There are three pools, the lowest one which was the only one that had a tolerable temperature. The upper two were too hot. “Pillows” over the boulders in the creek. Photo by Thomas. Some masochists will dip like they’re doing the worm in the creek. Here I captured Siddharth not fully committing to the worm, but still doing way more than me… so I shouldn’t be throwing shade ¯\_(ツ)_/¯. Photo by me The two shallower pools to the left when you get to the valley level. Photo by me.

The pools and a danger sign. Photo by Alex Ben just out from the trailhead on the spur. Also looking wholesome af. My second VOC trip with a guitar and I loved it! Photo by me Would recommend a trip out to ski the mellow slopes at Metal Dome and to the Keyhole Hot Springs! Good times to be had by many more in the future <3

Click here for more photos of the trip(s) and some videos of skiing and a special dance video by Hannah and Isaac if you scroll 6/7 to the bottom. https://photos.app.goo.gl/YFChNij1xSmWo2cQA