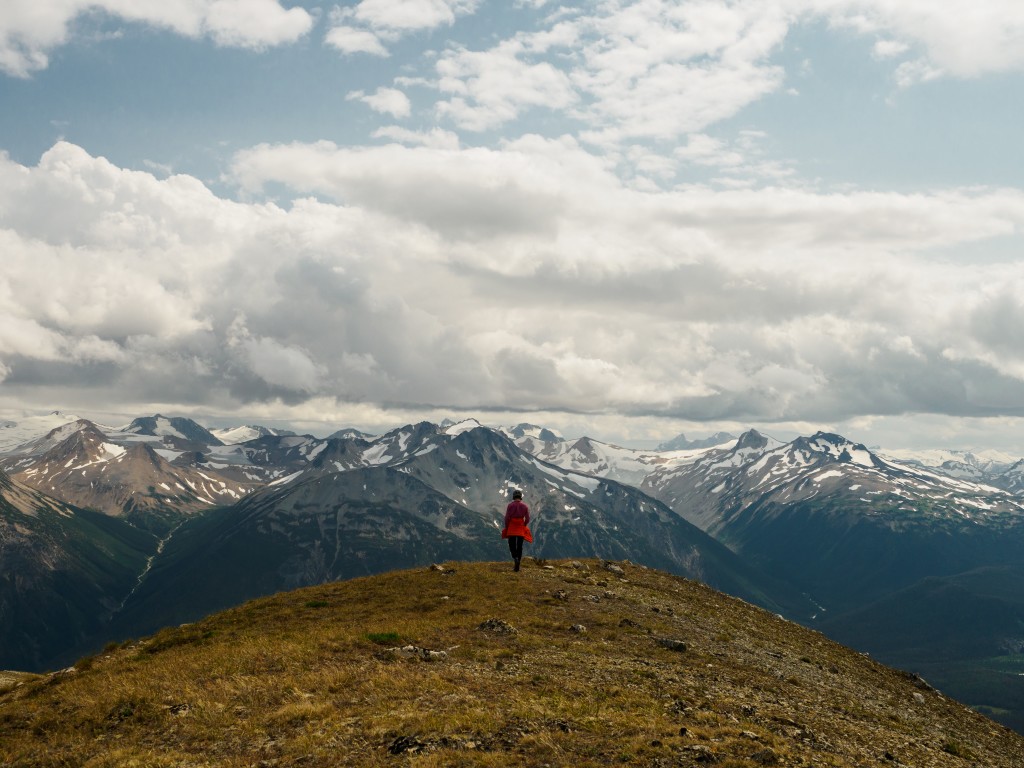 Our trip to Griswold Pass began as a trip to Strathcona Park – Cassandra and I planned a traverse route somewhere in Strathcona. Then, a couple weeks before leaving, Cassandra was offered a ‘tedious’ job that involved flying up to the Bridge Glacier with a few scientists and hiking around for a few days. Not wanting to rob Cassandra of the opportunity to stare at alpine plants for a week before our trip which would involve staring at alpine plants for another 5 days, we decided to change our plans.

Just weeks after the legendary June 2021 Heat Dome we set off to Griswold Pass. Our first obstacle was that it seemed like both accesses to Griswold pass (through Slim Creek FSR and Bridge River FSR) had been washed away by mudslides caused by melt water. Luckily a couple days before our trip we inquired with the logging company working up Bridge River FSR and were told that the 3-4 mudslides on the road had been fixed and we would be welcome to drive up as long as we had a VHF Radio. Ryan procured a radio somewhat legally and we were off.
On the 22nd, Ross drove us up the infamous Hurley and we swore not to take bets on how long it would take to get a flat tire. Luckily we were prepared when it did happen and after Tom repaired his cheap Canadian Tire tire with some “bacon” we were on our way again. We met up with Cassandra, who had just flown out from her tedious trip to Bridge Glacier, at Tyax Lodge.

Cassandra had a bag of eggs left from her week long trip. The eggs were no longer intact, despite having been “hard boiled eggs”. It is somewhat unclear how they ended up being completely uncooked, but Cassandra’s optimistic outlook prevented a full realization of this fact even after a number had broken (she thought things like “maybe they are just wet”). We worried what to do with this bag until we remembered the BC Hydro rec site we had passed driving to pick Cassandra up.

We started up the Bridge River FSR around 4 pm and there was still plenty of logging traffic. When we turned on the VHF radio we were amused to hear the loggers in the yard talking about letting the small SUV, that was probably going the wrong way and would obviously immediately turn around, through the sorting yard. Ryan assured the loggers via VHF radio we were indeed on the correct FSR and we seemed to gain some credibility in their eyes.

The access route we took was about 54 km up Bridge River FSR and we were able to drive up most of that. During the drive we called kilometers and we spent a fair amount of time pulled over waiting for logging trucks heading down to pass (a note to remember, on FSRs outbound traffic always has the right of way). Near the end of our drive, where the FSR seemed the most narrow and winding, a couple of loggers did not call kilometers. At one point we had to stop at the last moment, with barely enough room and a sheer drop off on the side of the road, to let a fully loaded logging truck pass. Everyone seemed to agree this was an experience we did not wish to repeat.

We parked 1 km from the start of the route. The route led up a steep hillside into Glacier View Lakes. After infinite car faff we were off. We headed up to the logging road following a route from Bivouac. Just before the road dipped down to an old prospector cabin and ended, the route headed up the hillside next to a steep drainage. The route up was short and steep. We found sparse flagging and tread next to the drainage but mostly we headed straight up and had no trouble finding our own way.

Just before we reach the lakes we went off towards the river and caught a glimpse of the hoodoos around the drainage. 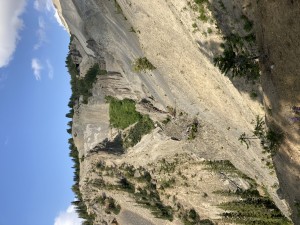 Cutting close to the drainage brought us up to the corner of the meadows just below Glacier View peak and beautiful views of the opposite side of the valley, just west of Bridge Glacier. Below the peaks was a sandy area filled with islands of alpine plants that edged a lush alpine meadow.
We headed to Glacier View Lakes just in time for sunset and made camp for the night.

Plant Fact!
Almost immediately upon entering the alpine meadows on our first evening, Cassandra spotted, Alpine Sorrel. We took samples for Cassandra’s colleagues and learnt that Sorrel plants like O. digyna are a great addition to salads due to their acidic citrus like leaves. 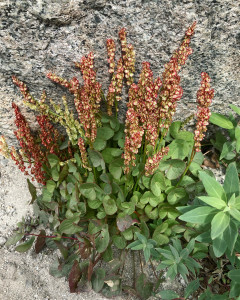 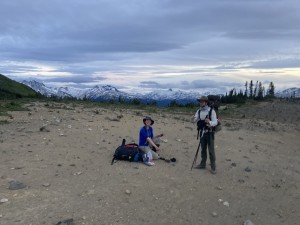 We had a leisurely start on day 2 and headed from Glacier View Lakes north toward Griswold Pass. The pass itself was about 7 km from our camp through expansive, rolling alpine meadows. On our way toward the pass we stayed high, cutting close to the slopes on the western side of the meadows which resulted in some side hilling and jumping over boulders. Just below us the meadows offered easy travel and eventually we steered away from slopes.

Just before the pass we were surprised to see a couple of orange expedition tents off in the distance. It was obviously a well outfitted camp and nobody was surprised to find out it was the ACC (Alpine Choppers Club) Vancouver Island on their 2021 summer camp. 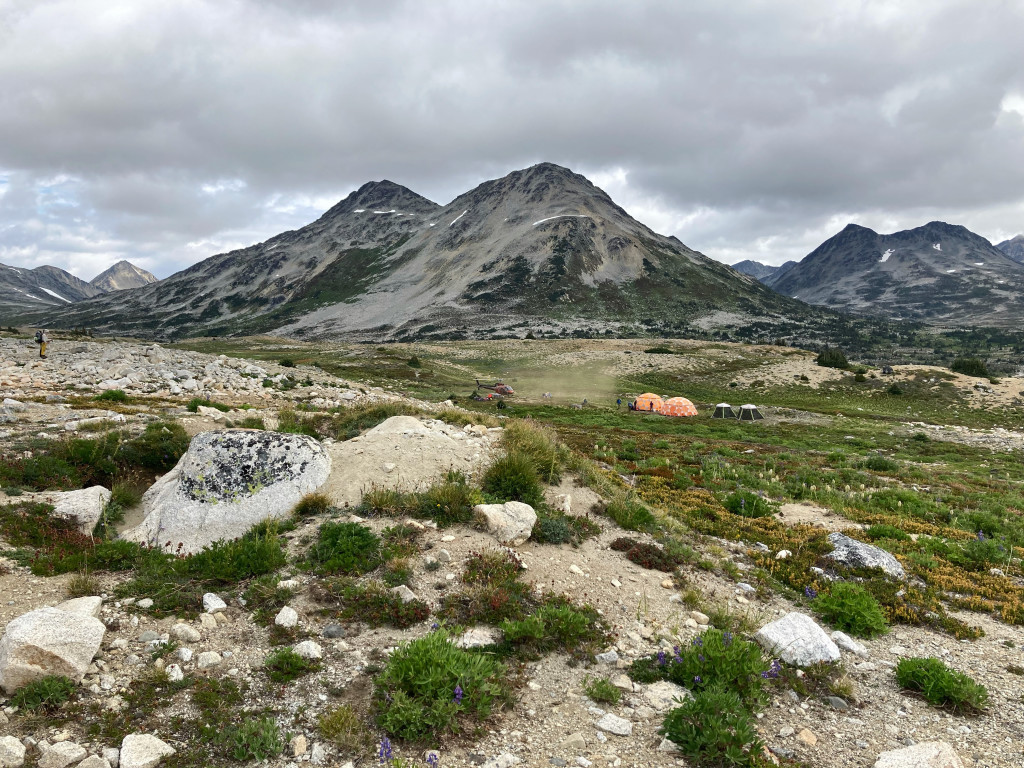 We set up camp about 1 km farther down the pass. After setting up camp and enjoying a short swim, Elliott Skierszkan and some of his friends showed up. It was special to meet up with him in the pass after having not seen him since before the pandemic.

Around 4pm, we decided to scramble up Baryon, the nearest peak to our camp. The peak looked out over the icefields to the west and across the pass to the drier landscape in the east. Some of us skirted around the edge of the glacier  through the boulders while others followed the mellow ice edge up to gain the ridge around the back. The scramble from this west side was not too difficult but was steep enough that we were happy to have helmets. The views from the summit were spectacular looking out over the Lillooet Icefield. After a quick scramble back down, around 7:30pm we were back in camp to make dinner. 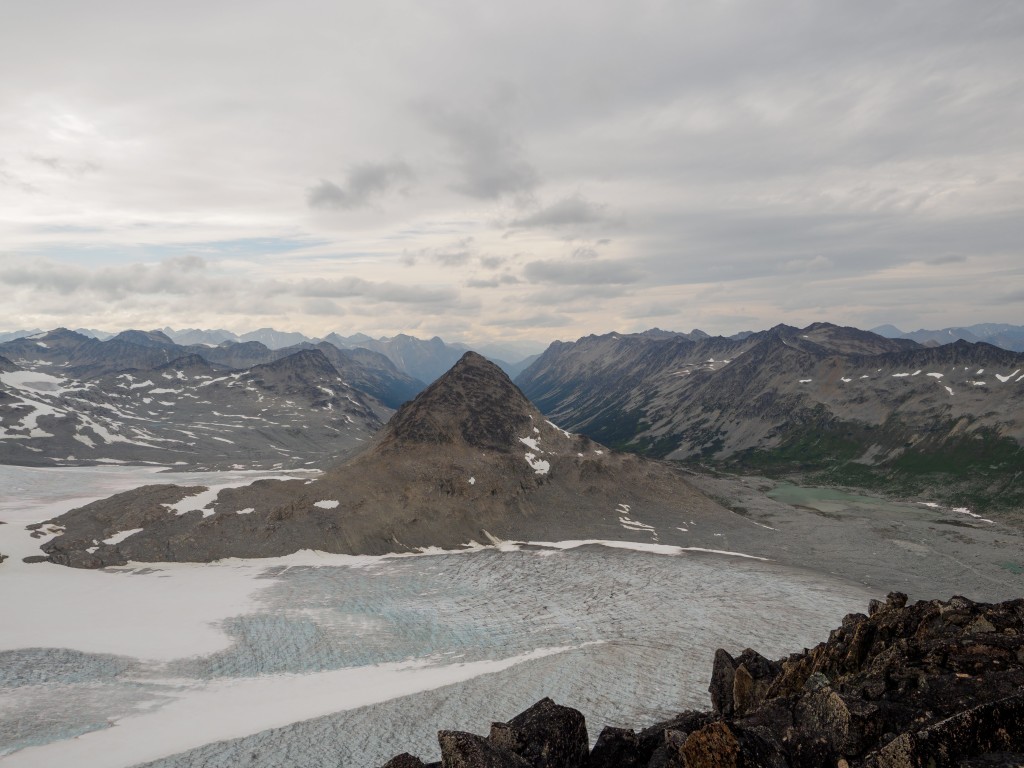 View of Muon Peak from Baryon 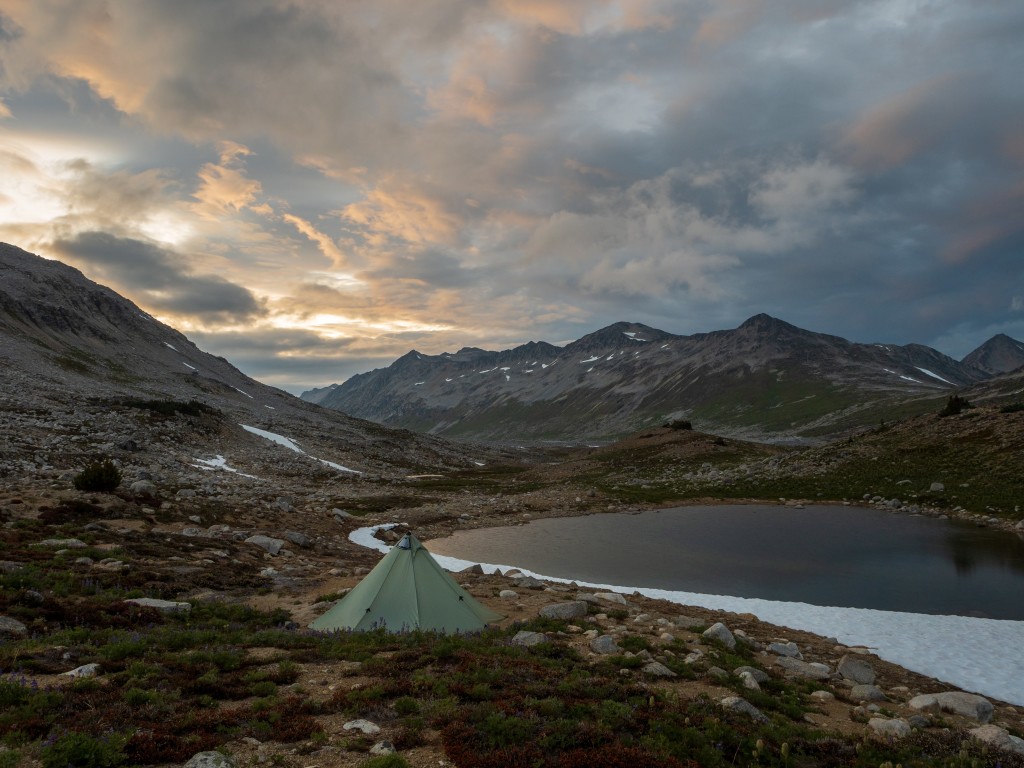 After a somewhat slow morning (even though we started early), Joanna convinced Tom, Ross and Cassandra to scramble up Microscope and Griswold peaks. First we headed up the pass through beautiful meadows. Cassandra spotted an isolated population of about 20 Dryas octopetala individuals. We aimed for Microscope Peak first and gained the ridge, then passed a sub-summit/glacier and continued along the narrower upper portion of the ridge to the true summit. This peak had even better views of the drier South Chilcotins. After briefly eating lunch, we took a tundra nap on the summit in the sun. Alpine plants (Silene acaulis) near the summit of Microscope peak 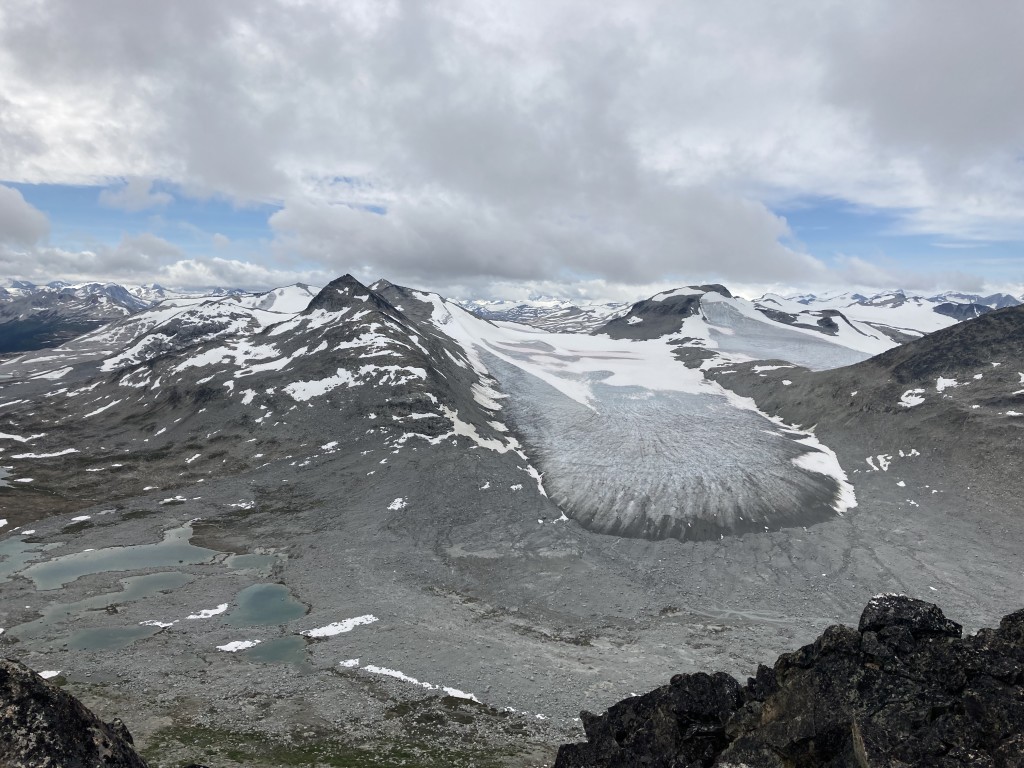 After a relaxing nap, we set off for Griswold Peak. After dropping down to the pass between Griswold and Microscope Peaks we ascended the ridge up Griswold Peak. From a distance this route looked like it would definitely go but as we got closer the loose rock and steep angle began to look less and less feasible. We opted to drop down off the ridge to a snow field, collect some water and try going up the opposite side of the snow. After somewhat steep loose rock we gained the ridge to the summit. From the top we looked directly down on the pass and our camp. After some debate on how to get down, not wanting to retrace our route up, we decided to head directly down the scree and heather slopes towards camp. From above this looked almost impossibly steep but actually went fairly easily. 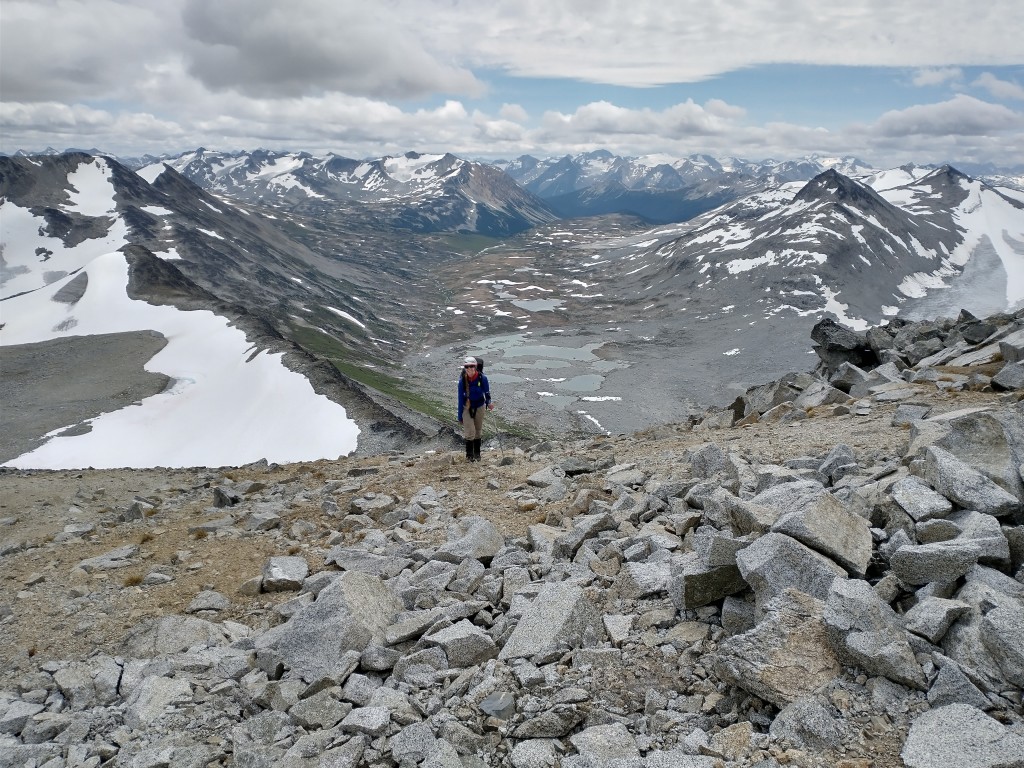 View from the shoulder of Microscope peak 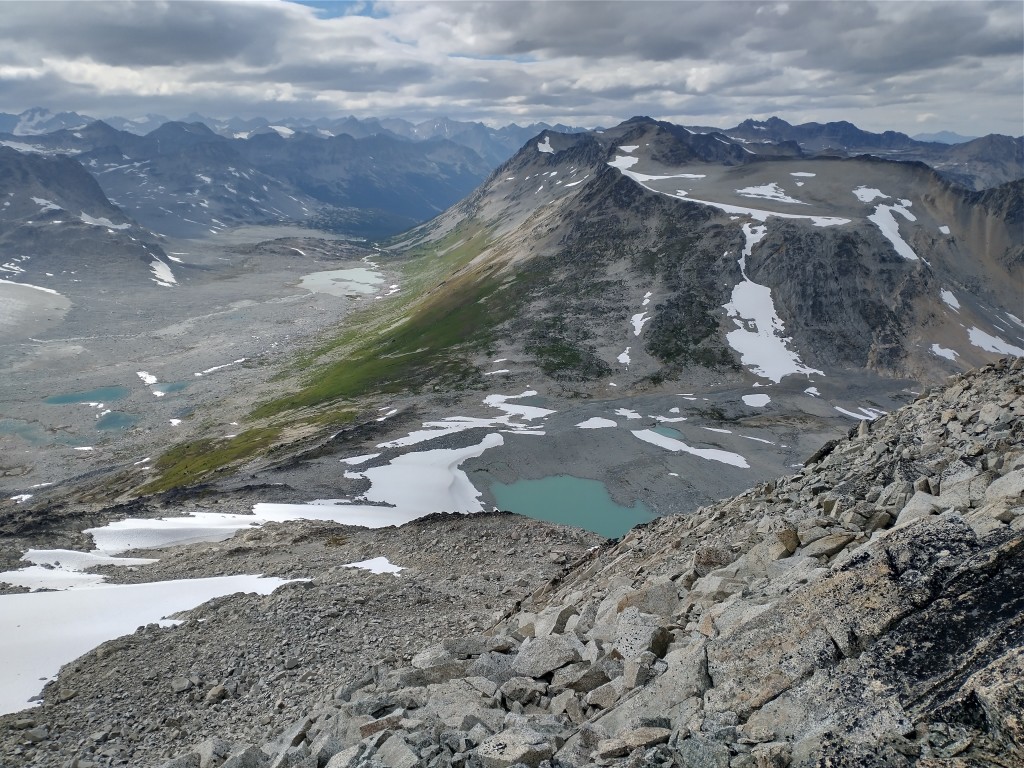 Back in camp we met up with Ryan. Tom added what was meant to be four nights worth of dried vegetables to a single dinner, resulting in a meal that expanded across multiple pots. Elliott came by our camp to say hello. Four nights of food, one cup Ryan waiting patiently for us to return for dinner

We debated spending another day in the pass but concerns about heading out along the terrifying FSR on a weekday convinced us to hike out a day early. We followed a slightly lower route out from the pass and watched the ACC VI party get picked up by helicopter. Back at Glacier View Lakes we had lunch in a bed of heather. It was still fairly early in the afternoon so we decided to drop our overnight packs and quickly scramble up Glacier View Peak. After a very short steep snow section (which we were somewhat glad to have ice axes on) we wandered along the scree covered ridge to what was likely a subsummit. The views out over the Bridge Glacier, where Cassandra had spent the last week, the Lillooet Icefield and Athelney Pass were spectacular. 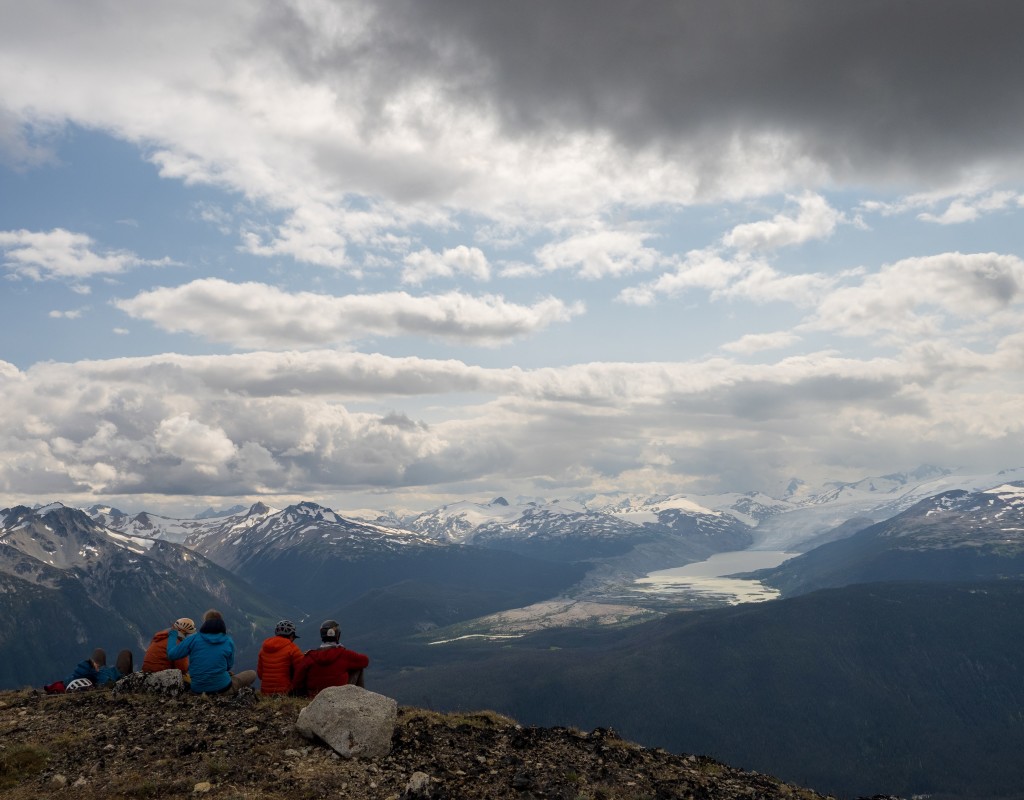 Cassandra, Tom, Ross and Joanna taking in the view from Glacier View peak After hiking back down to the car, we drove out and through Gold Bridge to get to Kingdom Lake Rec Site. Despite being a Sunday evening, we passed four vehicles coming up the road and were happy to have a radio.

The next morning, we went for a nice swim in the lake and packed up slowly. We drove through Bralorne and poked around a bit at the old mine. Tom managed to cut his hand on a rusty nail, but otherwise enjoyed seeing all the old equipment. Ross tired of waiting for Ryan and Tom to finish exploring the mine and lay down on his thermarest by the car, “assuming the position”. Ryan and Tom at the ruins of the Bralorne Goldmine In the town of Bralorne, we visited a museum that was staffed by a very enthusiastic woman who talked our ears off about the scandalous history of the area. On the long drive back to Vancouver, Ross said he did not believe there were warm lakes in BC. Tom was intent on proving him wrong, so we enjoyed a swim in Brohm Lake. Ross conceded it was not cold, but clarified that “not cold” and “warm” are distinct.

Overall, a great trip to a beautiful place.