Cousin of Cave V (AKA Underground Log Ride, But Without the Logs)

Posted on January 5, 2022 by Diego Altamirano

It was a Friday afternoon. We met up with our car groups, excited to get going. I don’t know about the others, but our ride was packed tighter than – well, let’s just say it was tight. You could even call it snug. Our destination was a ways away, on the island, so we knew we were in for a comfy ride.

We headed to the ferry terminal afterwards and met up with the other groups. Food became the main priority once we got moving. Unfortunately, Whitespot had run out of the cardboard pirate ships that day, so we had to settle for plates like normal adults.

Once on the island, some very important stops had to be made at the nearby liquor store, then went to pick up some more food and snacks. After reuniting with some of Nick’s island friends, we set off for the highway. And let me tell you, there’s nothing like ripping down a Vancouver Island road in the middle of the night playing some banger songs to set your spirits in a good mood.

Everyone knows the best caves are the ones nobody knows about, so of course that was where we were going. After all, how hard can it be to find unmarked logging roads in the middle of the night on an unlit highway? We were about to find out. Where was it, you ask? Honestly, I couldn’t tell ya, but I do know we almost missed it twice, coming from both directions too.

Once in the woods, it took about another hour of driving around skinny dirt roads with a few backtracks here and there to finally arrive at the campsite where the other cavers were at, around roughly 3 AM. And by campsite I really mean the side of the road, so you know it’s the real deal. Setting up camp went by relatively quickly, and then we had a nice short nap. Thus ends the first day.

Saturday was the real caving deal. we started it off with a nice morning wakeup and breakfast. This was followed by a second breakfast, for all of those that weren’t awake the first time. Once all were fed, it was time to start to think about getting ready to go.

After an indeterminate amount of time, during which some ropework was practiced, equipment tested, and wetsuits tossed around, we were finally ready.

We didn’t really need to bring anything into the caves, since we wouldn’t be in there long enough to go hungry, and “you can always just stick your face into the water for a drink!” it’s a good thing I remembered this, because let’s just say I got pretty thirsty later that day.

We hiked down to another logging road, at which point we split up. The plan was to enter the cave from two ends, and then cross over in the middle. Of course, there’s absolutely no chance of that going wrong, so we adopted the plan immediately. 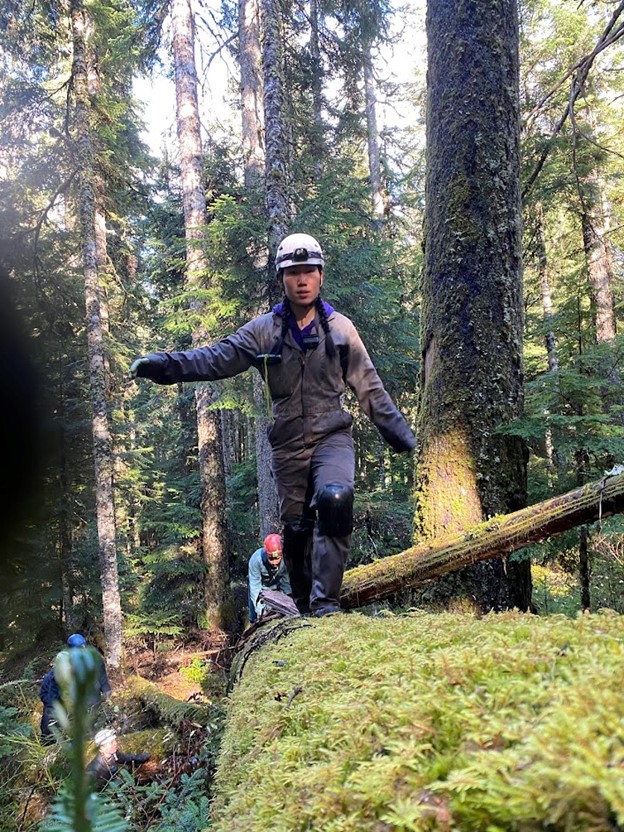 Vanny getting some higher ground in the search for lower ground.

To the untrained eye, it would seem as if we were just randomly headed into the woods with no direction or destination. We would soon learn that that was mostly true. It turns out that caves can be very hard to find, even if you think you know where they are. After probably an hour or two of just hiking in full cave regalia and wetsuits, we finally stumbled upon the prize – a small ravine tucked away into the ground (not the cave we were looking for, but it would do). We climbed down the sides onto a ledge that definitely shouldn’t have held the number of people that it did, at which point we turned our lights on, jumped into the river, and entered the underground world, the first time for many of us. 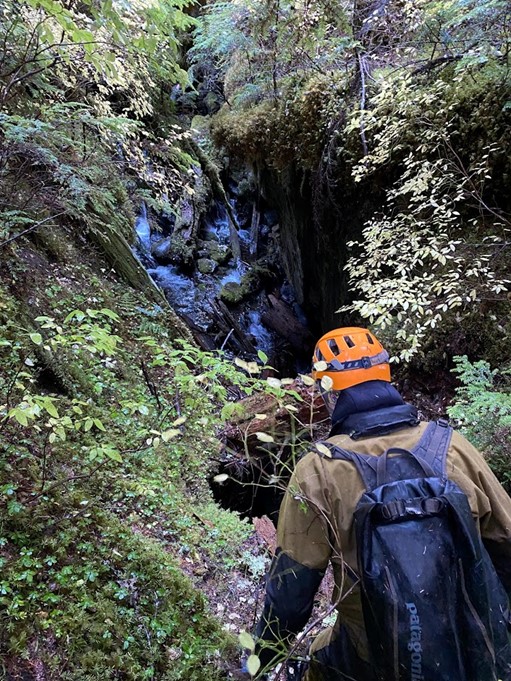 It was louder than I thought, but I suppose a big group of people splashing in a river inside a rocky cavern can get pretty echoey. At one point we ran into a small waterfall, which was pretty neat. The cave was pretty impressive, I had to admit. The spiders were a bit of a surprise, though, as well as a few cave crickets getting it on. 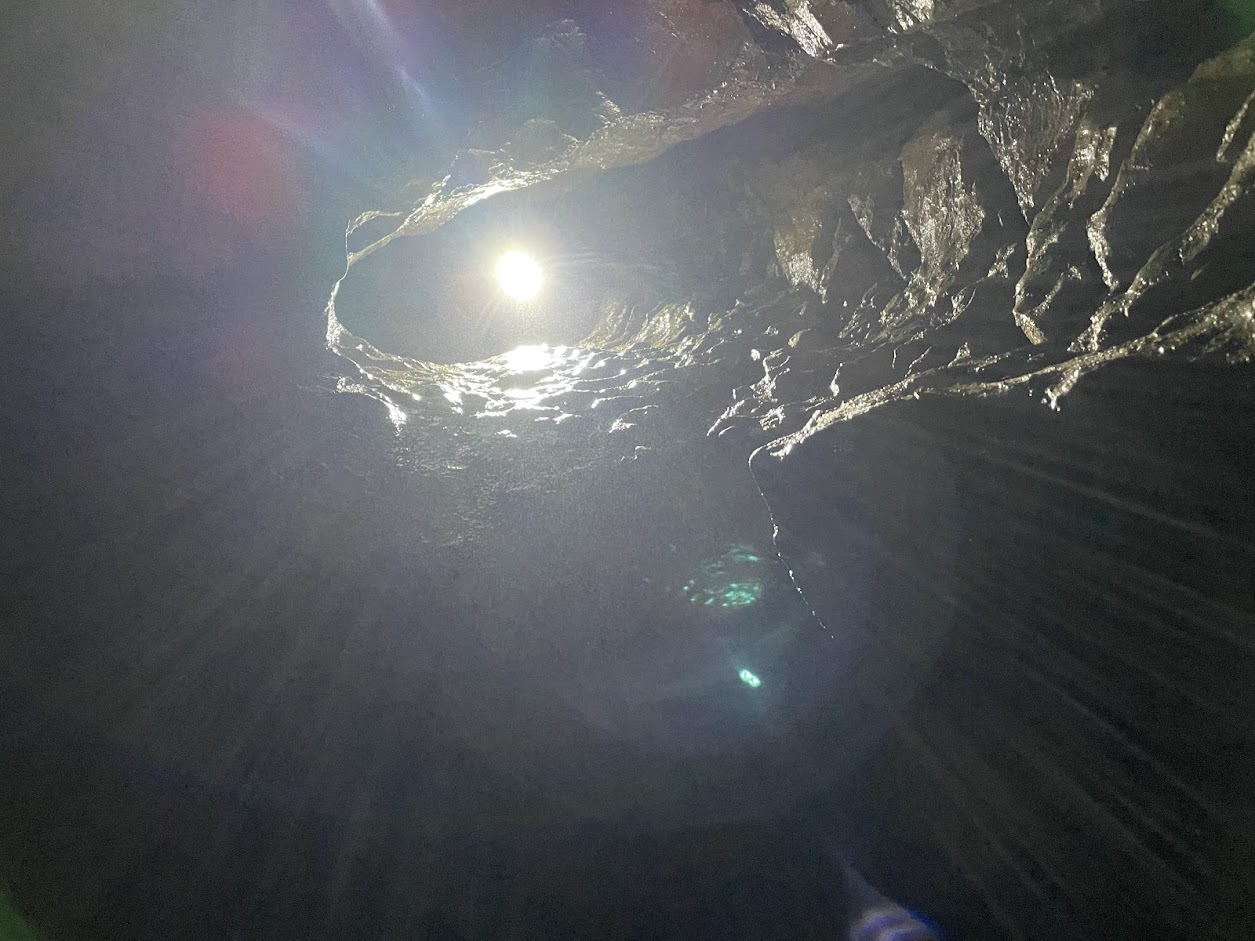 We managed to stay within our groups pretty well and made it through the cave rather uneventfully. The second cave, which was right next to this one, involved an incredibly tight squeeze at the end. Everyone made it through alright in the end. If we weren’t already dirty enough, after this cave, it looked like we were all wearing the same mud-colored overalls.  But no worries, cause the next one was sure to give us a fresh clean.

It felt just like a warm hug, but cold and made of rocks

Upon return to camp, we prepped with all of our rope gear, getting ready for the next cave, which had a 30m rappel through a waterfall at the end. Fun! It went by pretty fast, as no one wanted to just be sitting around in wet clothing. We set off for Amelia, which was a lot easier to find, as the river was definitely a lot larger than the last one. In fact, just inside the entrance, there was already a small waterfall, throwing up some wind, spray, and a lot of noise. There was a little side cave, which we used to get around it and to the next bit. This is where things started to get, well, spicy.

It was taking a long time, for some reason. As soon as I got to the front of the line, I found out why. We had to flying-angel our way down another larger waterfall. Easy enough, right? Anyways, I got the quick rundown on flying angels, even though you could barely hear anything because of the river. I took my first few steps into the waterfall, when all of a sudden, my legs decided I needed a nice cool drink.

I fell into the waterfall in a maneuver I suppose one could call “forced hydration”. I somehow ended up under the waterfall, holding on to the rope for dear life. An arm grabs hold of my coveralls and yanks me out, pulling me to the wall. I manage to get a foothold, and look down the cave to see everyone else bracing themselves against the walls, Ross hanging on after an accidental swim, meanwhile the river’s just roaring its way through the narrow passages. Nick comes climbing out from the end, waving his arms and yelling something about water levels being too high. This was starting to look pretty fucked.

It took some finagling and a LOT of yelling, but since I was already at the first waterfall, they decide I’m the first one up. Just grab onto the rope and pull yourself up, right? Sounds easy enough. It took two attempts ending with me under the waterfall before we realized this is not gonna work. With a little bit of rope magic, a few carabiners, and a growing love for deep-cleanse face massages, I finally manage to make it over the lip, at which point I stand there and just let it all soak in (literally and mentally). I stuck around for the next person and headed back to camp to warm up. Thankfully, Nick and Zach managed to cook up a better system for easier extraction, which sped things up a little. A few of us regrouped once more people returned, and we explored some nearby holes in the ground while we waited for the rest of the gang.

That night, we built up a huge bonfire to warm up, which was hot enough that you couldn’t stand within 2 meters without feeling your face peel. Social distancing, am I right? There was music playing, lots of drinks and cheer, and then the sock wars began. What is sock wars, you ask? It is the most intense, vicious, violent and gnarly game that you will ever have the excitement of playing. I’m talking swinging, grappling, yanking, swiping, strangling, all the works. Weapons not allowed, of course, but if anything, that only makes it more creative. Anyways, the night went on, and thus ended the second day. 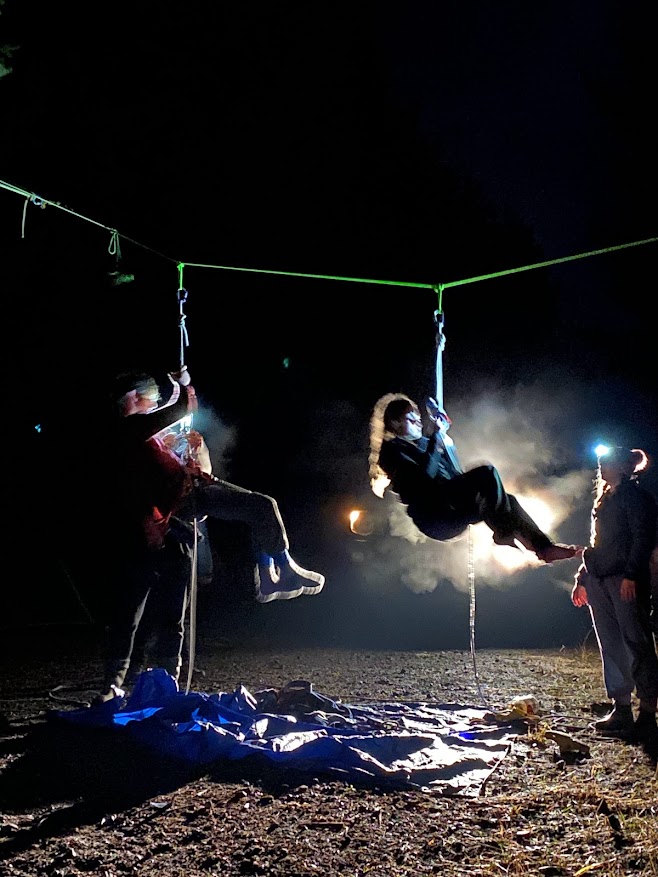 We wake to pouring rain and some very wet caving gear that was supposed to dry. Breakfast went on for quite a bit as people came and went, and as time passed, we realized that caving was gonna be a lost cause that day. Packing up took some time as everyone worked the chill off, but eventually we were ready to start heading home. We said our goodbyes to Zach and a few others who were sticking around, and went on our way.

We made it to the ferry on time, and the rest of the trip was pretty uneventful. Oh yeah, except for the gale-force winds. Turns out a storm was on its way, which made for a pretty funky ferry ride.

Overall, it was quite the trip. Many thanks to our indomitable leaders Nick and Zach, as well as Alex, who helped out with the rope stuff that we sadly didn’t get to use much of. It was a hell of a trip, with a healthy amount of Type 2 fun thrown in there for seasoning, but a great experience nonetheless for all of us freshies.

“Just ignore the cracking sounds from the log guys, no it’s totally safe, I don’t know what you’re worried about”

This entry was posted in Other, Trip Reports and tagged Cave, Cousin, Cousin of Cave, River, Underground, Water. Bookmark the permalink.

One Response to Cousin of Cave V (AKA Underground Log Ride, But Without the Logs)