On Saturday December 4th, 2021, 11 of us loaded up in three cars and headed out for a ski tour adventure at Red Heather Hut, hoping to summit Round Mountain, venture out to Elfin Lakes, and make some powdery turns. The trip, a one night overnight winter camping trip organized by Mary-Jo Weir Weiss and Louise Bunce, was set to be a fantastic two day adventure comprised of plenty of fun adventures with a good mix of beginner and advanced backcountry skiers. The avalanche report looked good, so long as we stayed outside of alpine terrain and used good judgement. Subsequently, I along with the 10 other VOC members started skinning up the trail at around 10am with an initial plan of simply reaching the hut and figuring out what to do from there. 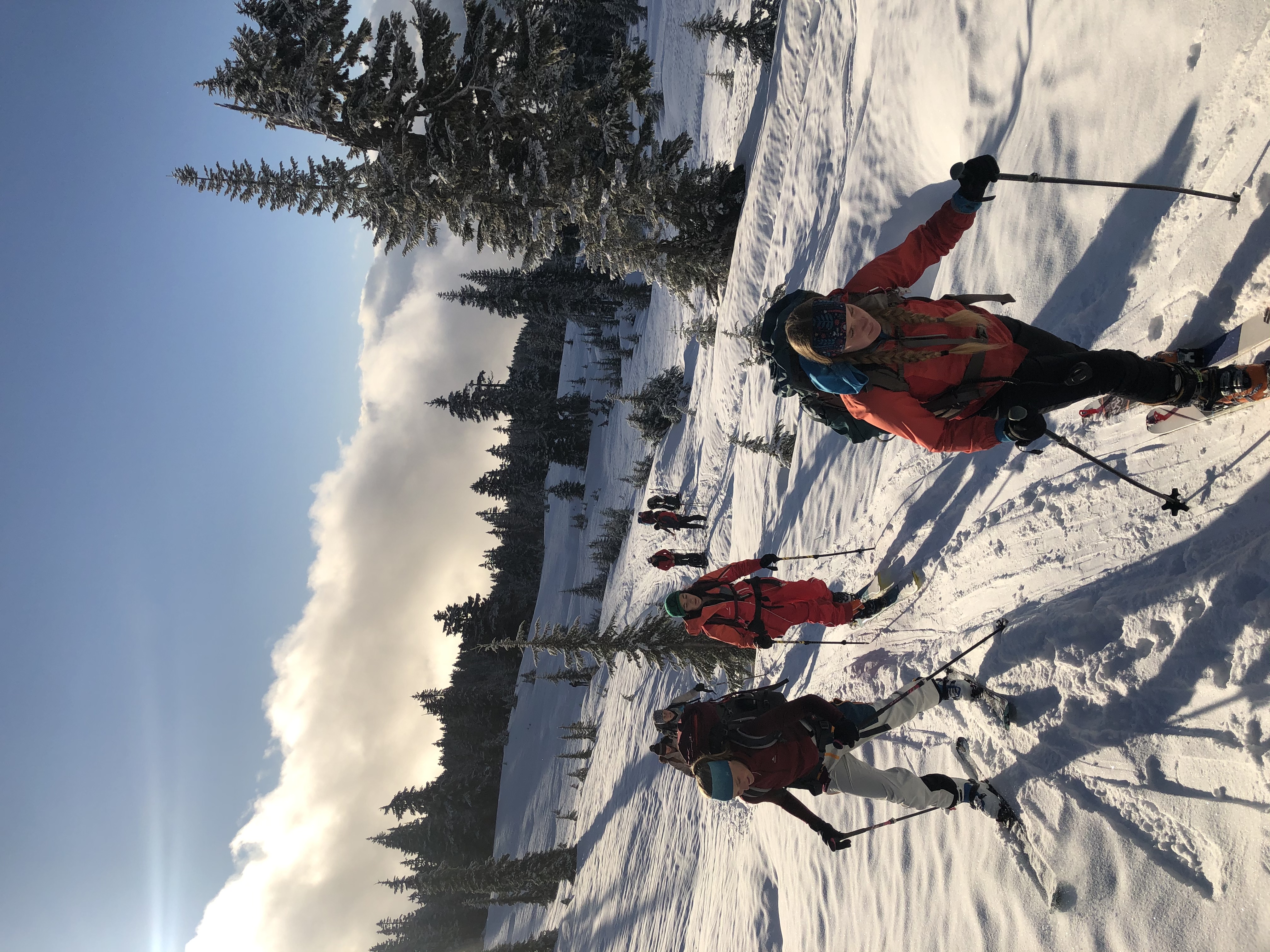 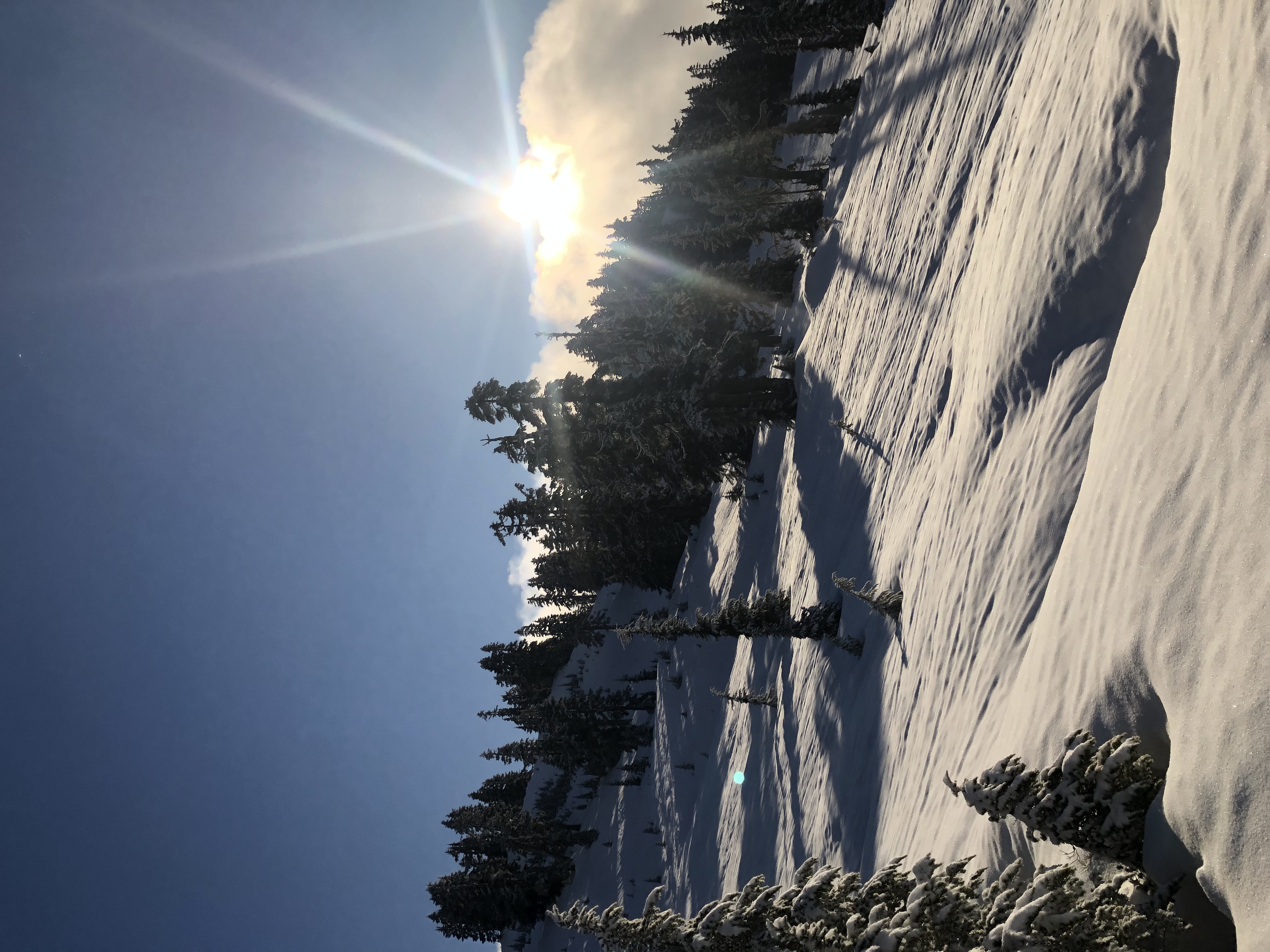 The crew was welcomed by sunny weather atop a fresh 10cm of snow; what a perfect way to start out the trip. After a couple hours of touring, we successfully reached the hut and dropped off our gear. Some members, including me, set up their tents to avoid having to faff around in the dark later that day. We set aside any nonessential gear (ie not avalanche gear) to make our packs lighter as we continued up the trail, keeping in mind everyone’s ability level and who had completed their AST 1 course and who had not. 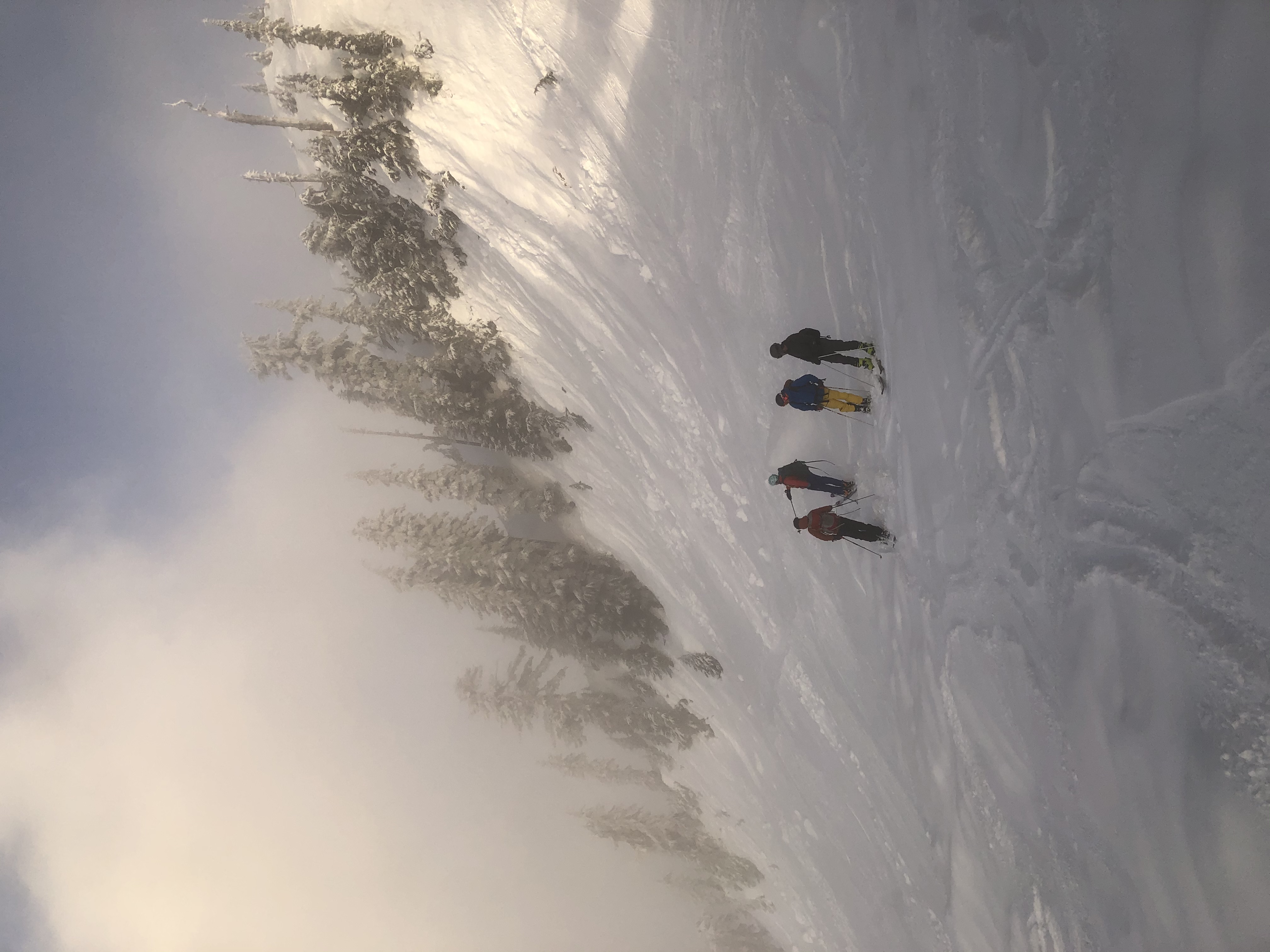 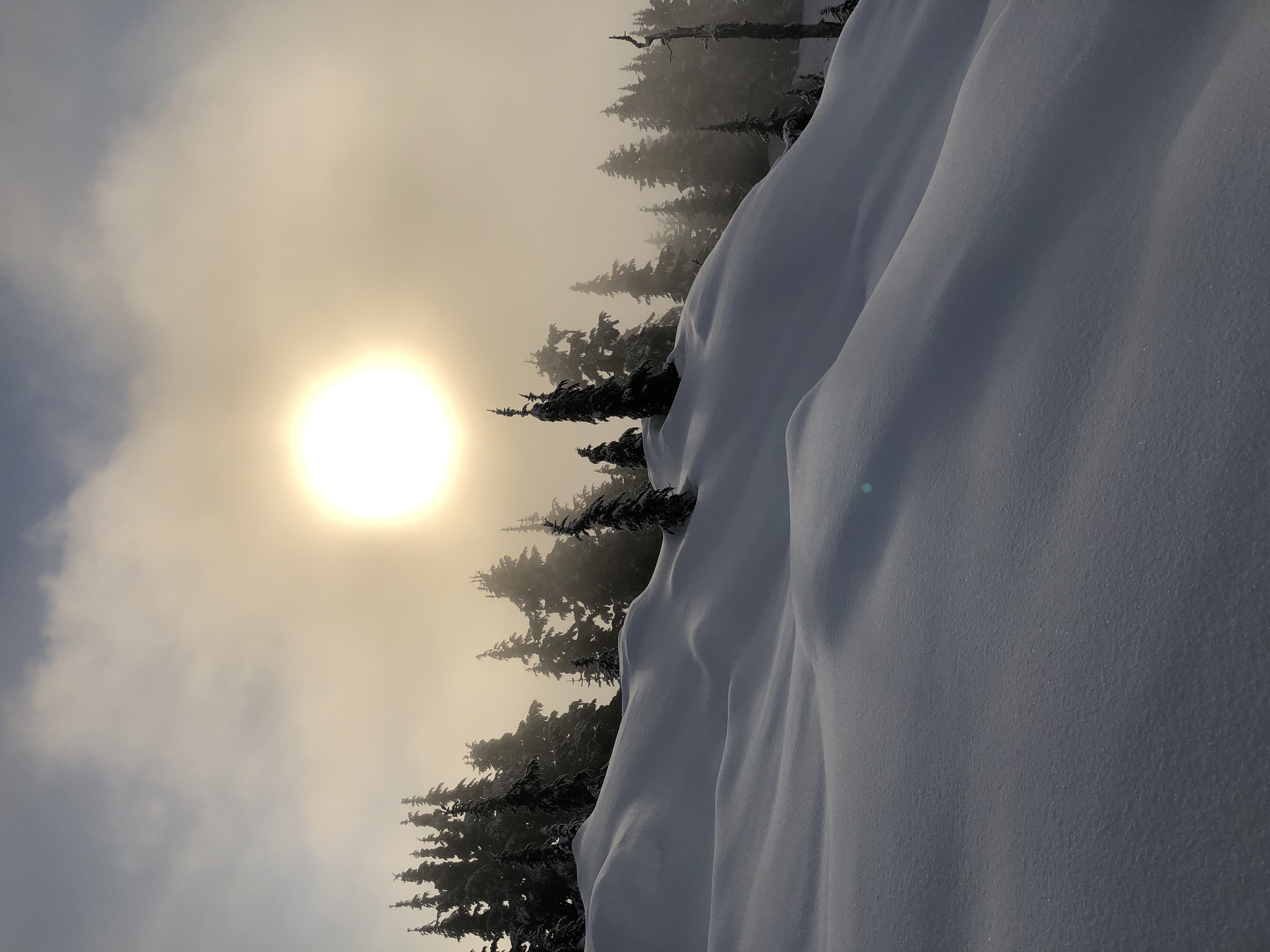 As the gang approached the summit to Round Mountain, those without AST 1 skied the mellow slope that led back to the hut while the other members of the group who had avalanche knowledge (including me) skied off the North facing aspect of Round Mountain, overlooking Mount Garibaldi. By this time, it was decently late in the day and the sun was beginning its journey down. It was decided that the AST 1 group would ski down into a gully until we felt it was appropriate to skin back up the same way until we reached the road that led to the hut, all while keeping an eye on the sun to make sure we had enough time to make it back up before it was completely dark outside. 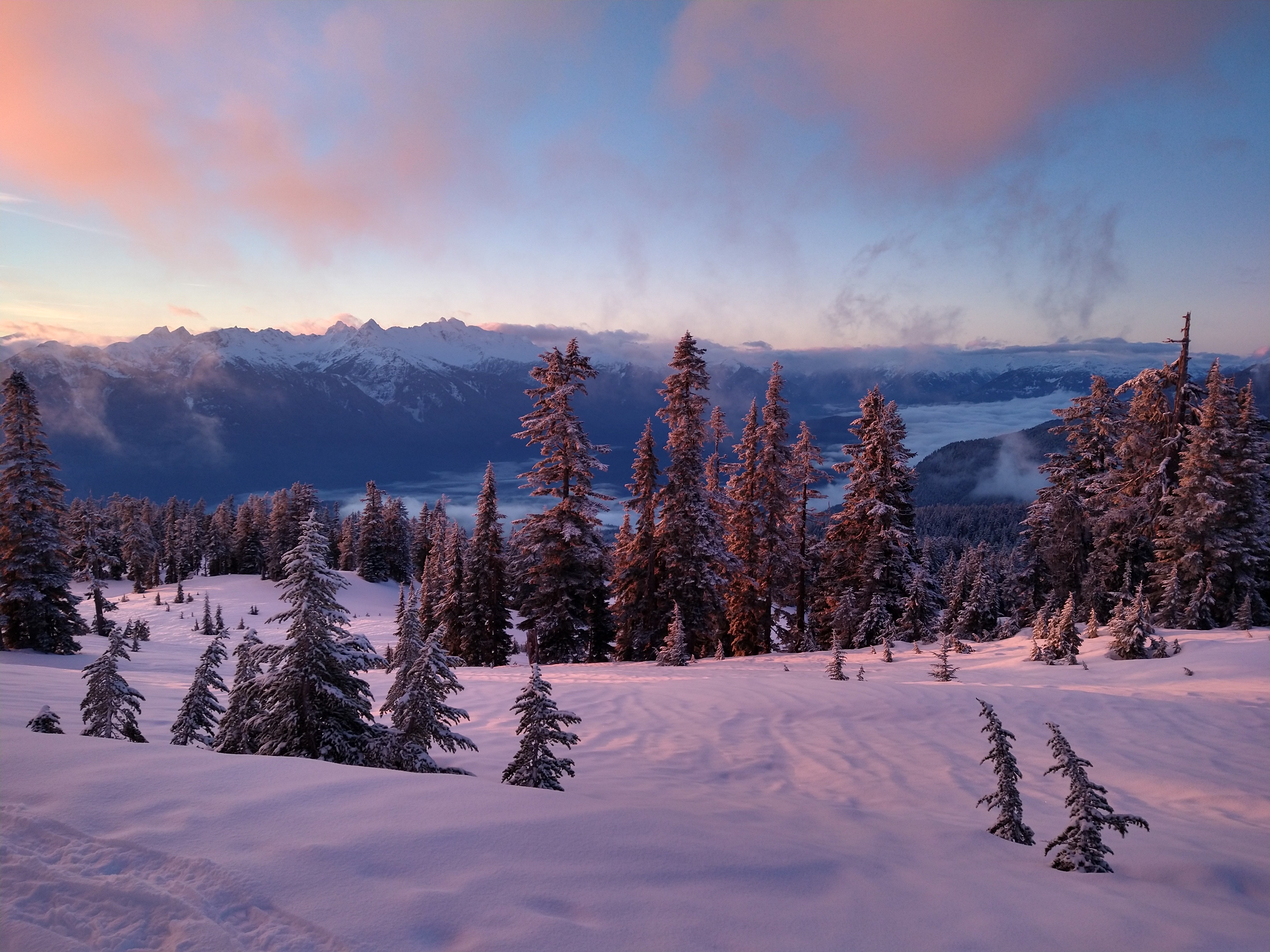 The sun set at the perfect time, just as the group had arrived at the top of the gully and had a nice, short, downhill traverse on the road back to the hut. We briefly stopped to admire the glow before continuing on in our journey. Upon reaching the hut, we reconvened with the rest of the group and began making dinner. Each person more or less had their own dinner plans, although some people in the group shared stoves or parts of their meals. We also built a fire in the stove located in the hut and shared the space with some other backcountry skiers/hikers who were using the table on the opposite side of the hut as us.

As we warmed up, we played charades and chess as well as sing songs courtesy of the VOC Song Book brought along by Ross Campbell. Ross also treated the group to not one but five or six avalanche shovel plates of salted fried potatoes. Ross had hauled up nearly six pounds worth of cut potatos and fried them in oil in a pot on a stove that was built into the hut. What a treat! As the time flew by, Lucas Bodkins and I decided we wanted to go for a night skin up Round Mountain and ski the slope that led back to the hut that the non AST 1 group had skied earlier that day. We managed to rally up three other VOC members for a combined group of five people to go on this adventure. Carrying the malfunctioning VOC walkie talkie, we planned to be back at the hut within an hour and a half. 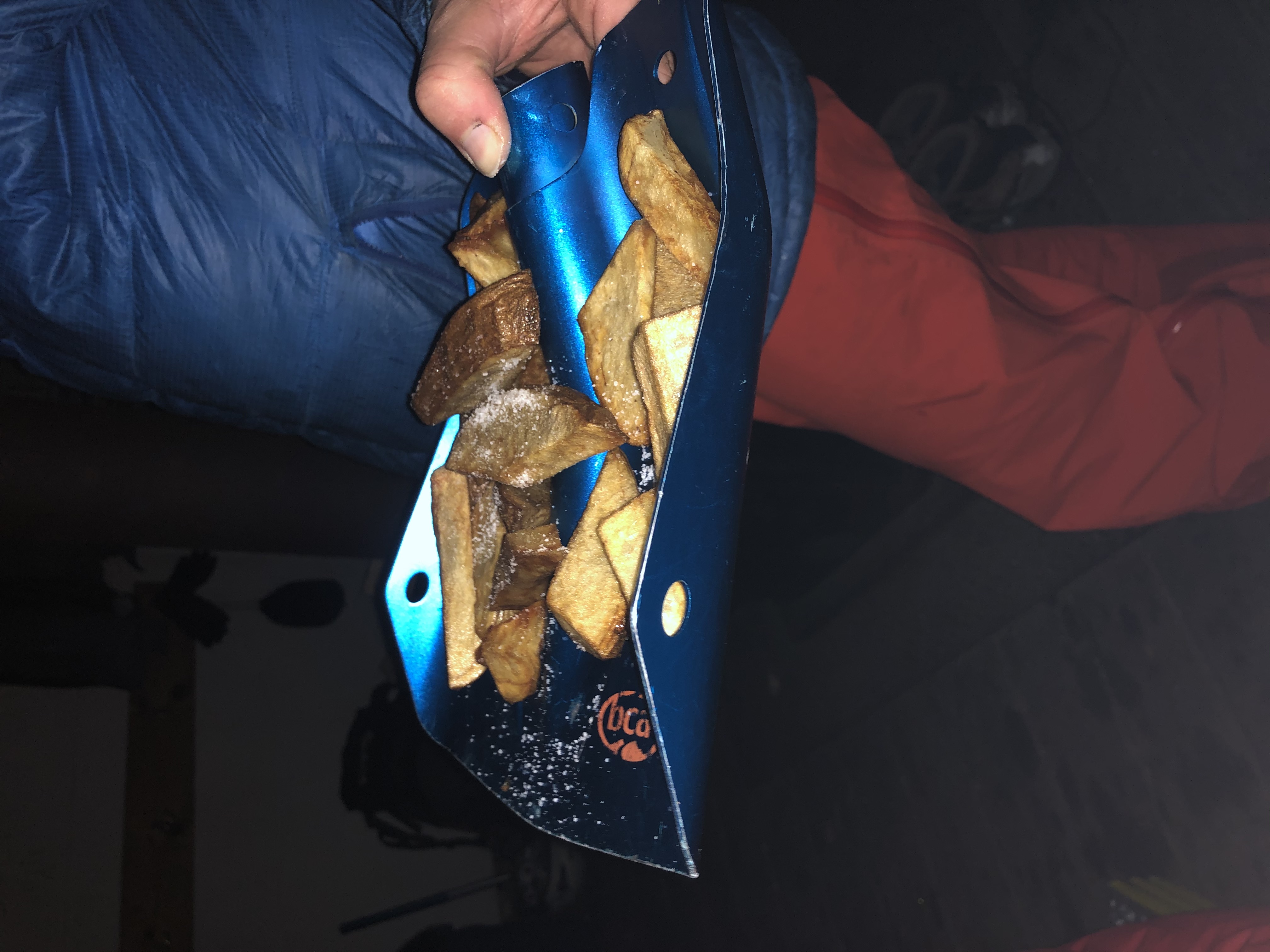 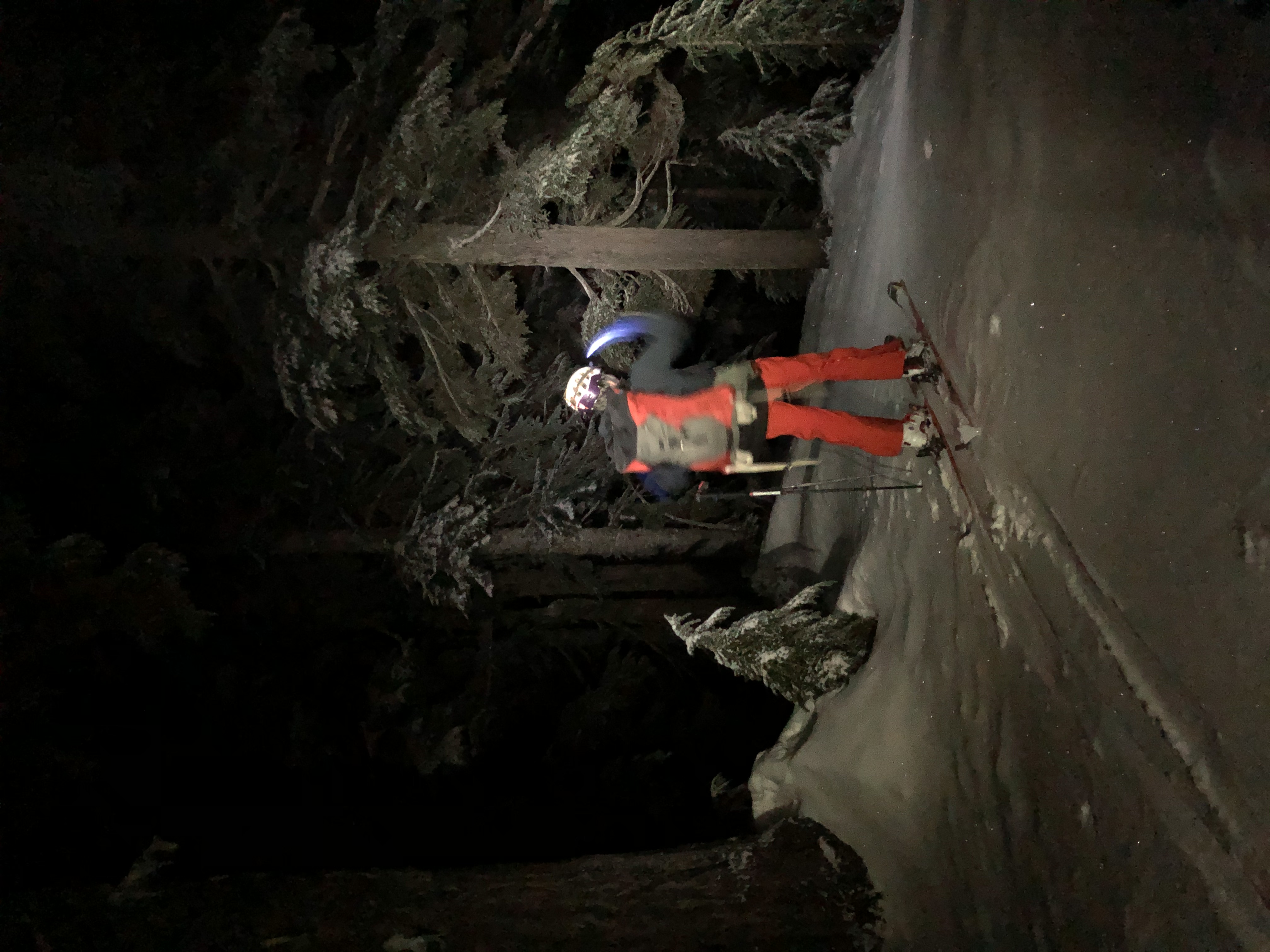 The group successfully completed the night skin and arrived back at the hut after admiring how beautiful the stars were in what felt like a true winter wonderland. Back at the hut, the team deskinned, changed clothes, and booked it straight for the tents for a good nights rest before skiing once again the next day.

On Sunday December 5th, 2021, the group woke up early for a nice breakfast and planned to hit the skin track by 8:30. In classic VOC fashion, this did not happen and we hit the trail for Elfin Lake beginning at 9:30. The group had taken down tents and left all nonessentials in the hut once again so everyone could travel light and fast. The plan was to pick up the gear on the way out to the parking lot later that day. The trail to Elfin Lakes was more or less a traverse, with little consistent or steep uphill but rather traveling gradually uphill and downhill across the road that led to the destination. 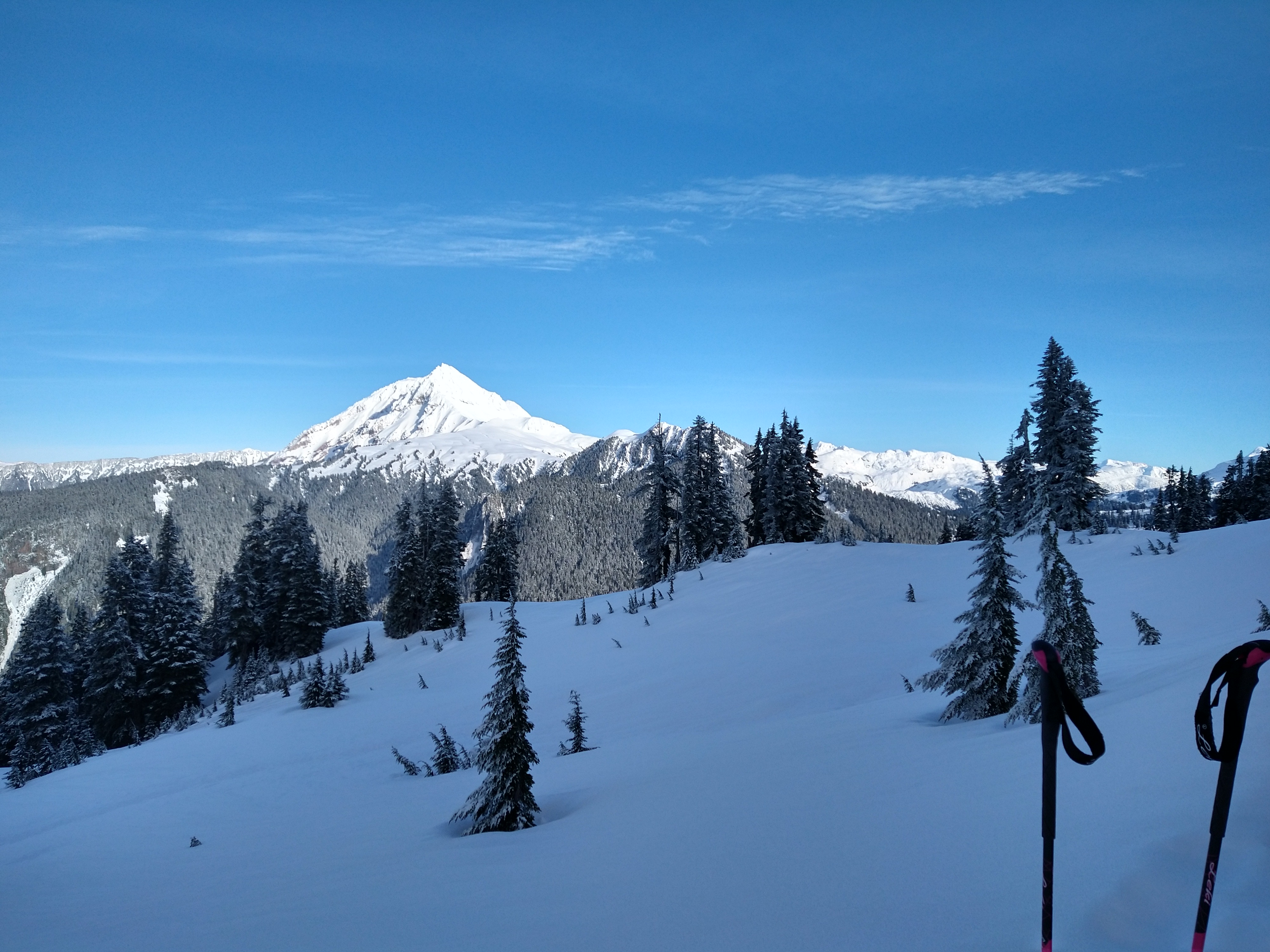 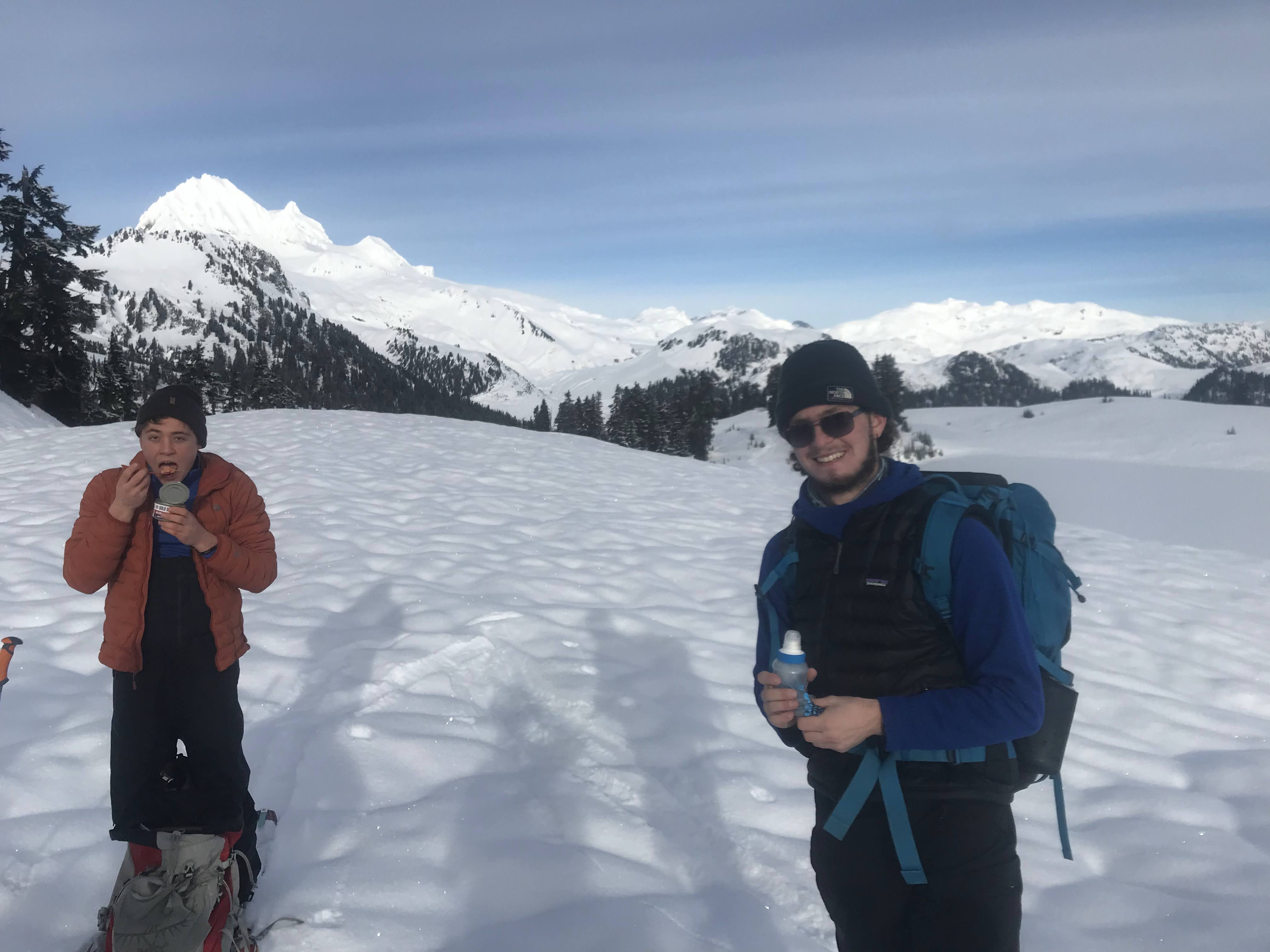 Once again, the group was blessed with a blue bird day as we approached the lake in all its glory. Although not many proper ski turns were made along the way there (or back), it was still a great sightseeing experience for everyone. Upon reaching the lake, the group turned around and made the trek back to the hut to pick up the gear and head down the skin track to the parking lot to head back to Vancouver. Overall, a very successful trip helped everyone get some early season turns and sightseeing in before the Whistler had opened and over a short window of good weather between Vancouver’s classic rainy days.

One Response to Red Heather + Round Mountain Ski