The following trip report includes an overwhelming amount of dog pics. If you are not ready for the cuteness, turn back.

Do you accept the risk of getting diabetes from sweet doggo overload and wish to continue?

What can you fit in a small jeep on a Friday morning? Let me tell you:

We are masters of Tetris and after some careful consideration and some squishing, we embarked onto our adventure, snugly nuzzled into each other. Aromatic dog breath was fanning the backs of our necks. The uphill, rocky logging road took us up until we could not drive anymore. At the point where we stopped, the snow was still nowhere to be seen. The snowshoers were happy with their choice of gear and the skiers were preparing mentally for some serious bootpacking. The doggos were chasing sticks, happy to stretch their paws after a cramped journey in the trunk. 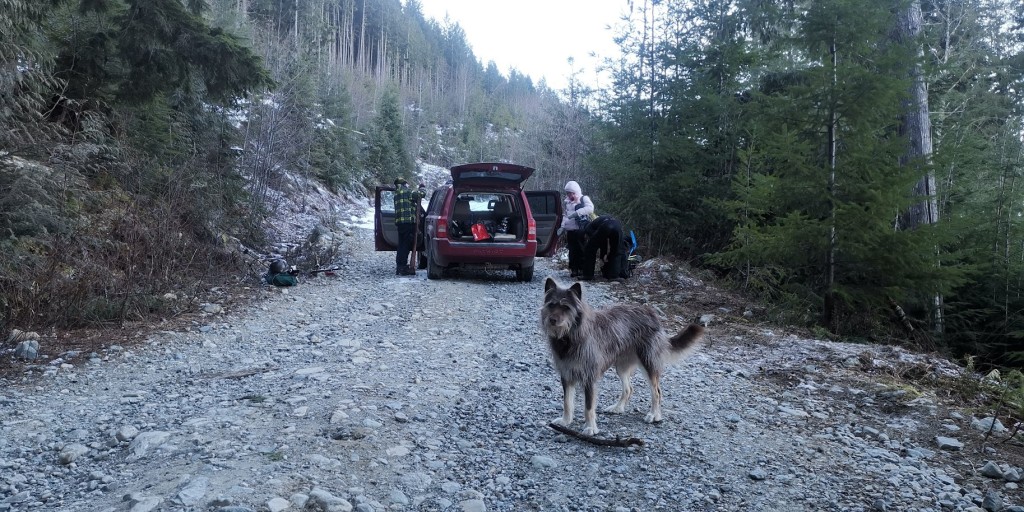 Not your dream bootpacking terrain.

At this point, let me introduce the doggos: Joo-joo is an anxious dog who wears a bright red “do not pet” collar. Luckily, she warmed up to us pretty quickly and was asking for pets after just a few hours. Wookiee- she really does look like Chewbacca! (source: starwars.com) “I see something white up there!”

After some more suffering, we encountered a little bit of the very-welcomed snow.

On the avalanche terrain that we have been worried about previously, the biggest risk seemed to be a landslide, not an avalanche. Climate change is real, folks. 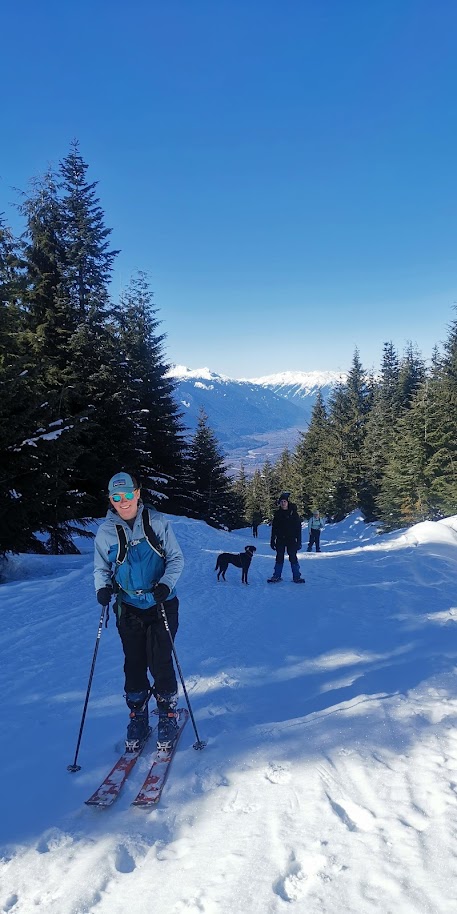 The weather was amazing. 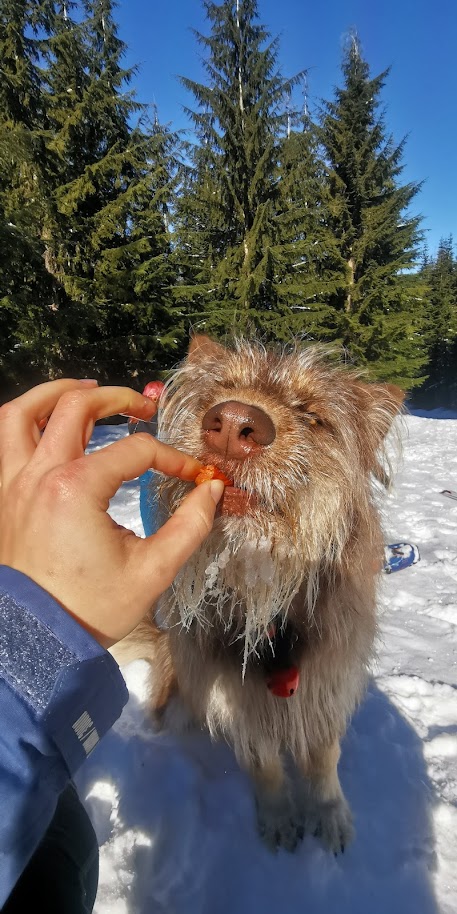 We followed the logging road all the way up. The walk was quite easy and pleasant. We encountered steeper parts only right below the peak. 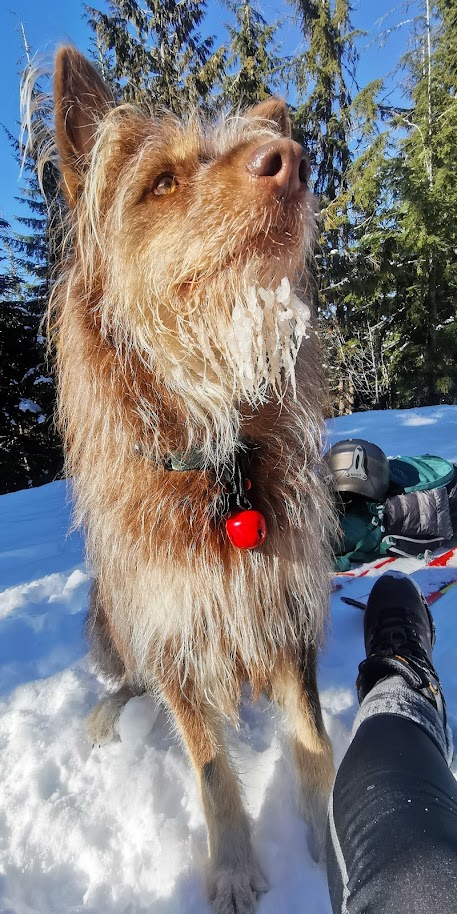 Wookiee absolutely rocking her icy beard. I wish I was as cool as her.

What I loved about the trail is that it was very empty. We only met one other person, which gave the dogs a lot of freedom and possibility to roam around freely. If you have a dog and want to get out the city, I definitely recommend Mount Mulligan. “Why are you picking me up, hooman? I want to play!”

…and they played, a lot!

At the top, there was some very nice, mellow, open skiing terrain. Even if you are new to skiing, you should be fine on Mount Mulligan! Sun-warmed slopes are better than any beach.

We ate lunch together with the dogs, who managed to steal half of my sandwich and a few of my sausages. A lot of begging and puppy eyes were involved. 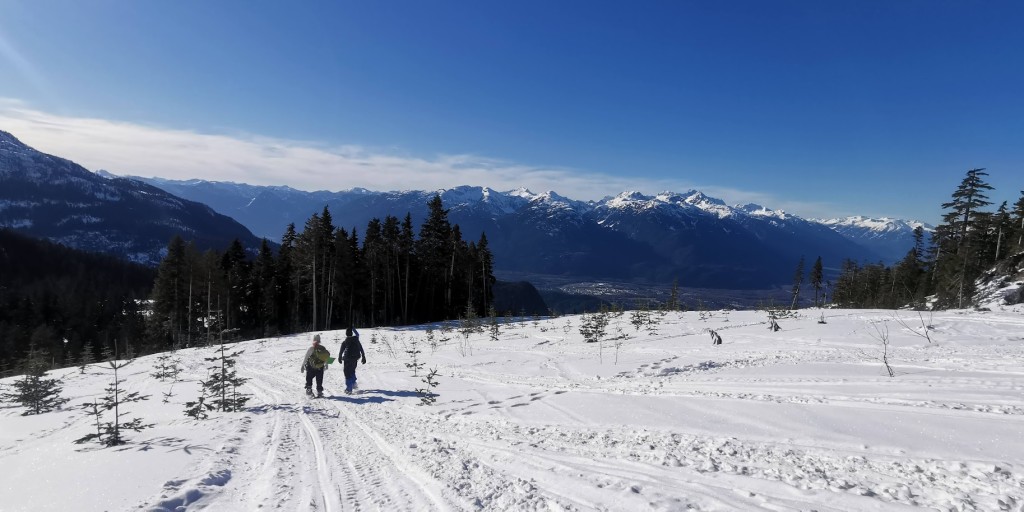 Time to start heading back! 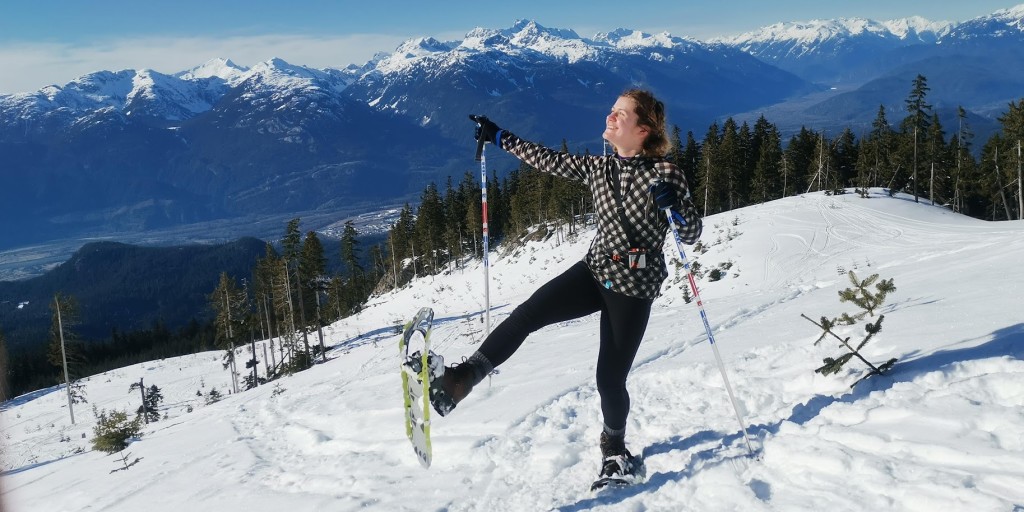 Three Poles striking a pose. (That’s the best pun I could come up with).

Favourite quote of the trip: “Wait, why is everything sticky all of a sudden?”

Our two brave skiers finally got to do what they came for! As they started gliding over the snow we found out that for Joo-joo, skis are alright, as long as you do not go downhill. Once you start sliding down, they become a highly suspicious, disturbing and possibly blood-thirsty object that should be barked at the whole way down. Tried to shut her up by using a glove as a makeshift muzzle. Did not work well.

There was some ice on the way down, so some creative voc-ers decided to slide down. Zooooom! 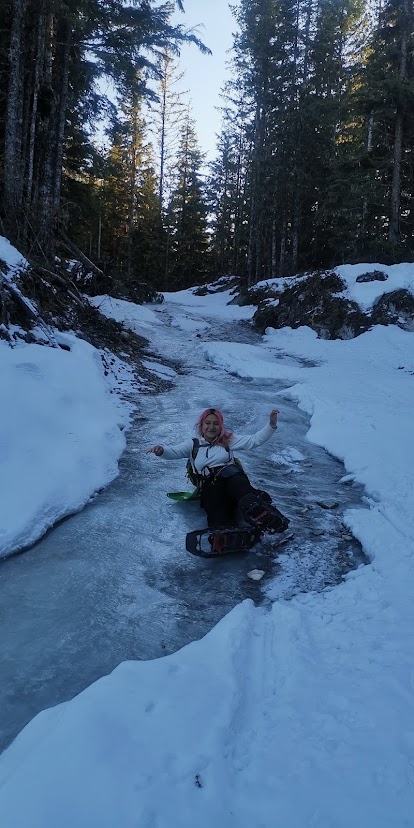 At the end of the day, we were happy. We got views and lots of love from the doggos. The skiers got to ski, the snowshoers got to snowshoe. We couldn’t ask for more.

“I believe that God put us in this jolly world to be happy and enjoy life.” – Robert Baden-Powell