~Here is an extremely late trip report about a ski trip in April 2022 that I am just getting around to publishing now that I am bored at home with covid and have run out of better things to do. Enjoy!

The exam period is here and we all know what that means! Time to accomplish all those spring skiing missions we have been dreaming about all March. After consultation with the weatherman, my friend Matteo Albertoni asked me if I wanted to ski Aussie Couloir over the weekend. That objective being high on my list, I agreed instantly. I picked Matteo up around 9:30pm on Friday after my very full day of writing two exams and mountain biking at Fromme, and we headed for the Duffey. We stopped in Squamish for gas and a late night coffee and donut from Tim Hortons which ended up being closed so we had to settle for 7/11. It was the biggest disappointment of the trip. We got to the Cerise Creek trailhead around 12:30am and pulled out our sleeping bags and passed out in the back of my car.

We slept for around 3 ½ hours before being awoken rudely by our 4:00am alarms. It was time to go. We finished packing our bags, had a quick breakfast of warm oatmeal and were nearly on our way. I made the discovery that my car window had somehow stopped working overnight and was stuck open about 2 inches. I hoped we would not find any small critters in my car when we returned. There were already a few other cars at the trailhead but they were all snowshoers. Waking up at 4am to snowshoe up a mountain seems like a questionable decision to me. We started down from the bank of the highway, crossed a bridge over the river and put our skis on. In the April predawn the forest was one huge ice sheet and neither of us had ski crampons. I ended up face planting when the skin track became a littler steeper than flat.

We emerged from the woods and the snow became more snow-like. We crossed the boulder field and started up the shoulder that would take us up to Anniversary glacier. We stopped near the hut to snack on Dino-Sour gummies and then continued on, passing a pair of snowshoers along the way. We took the route up and over Motel 66 and then descended slightly onto the glacier. Matteo was setting the skin track and he is not a fan of switchbacks. After 20 minutes of walking straight up the slope I wondered briefly if he was trying to kill me but then remembered the faster we got there, the faster we would get to be the first ones to ski Aussie that day and continued on my jolly exhausted way. We headed through the col and around the shoulder of Joffre to the expanse of Matier glacier, a very impressive chunk of ice. We took a small break with more Dino-Sours and some Watermelon Maynard’s. 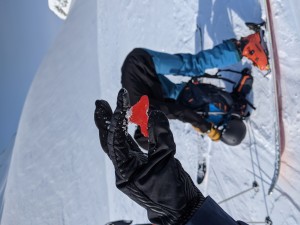 The entrance to Aussie was a frozen pile of debris which was so painfully slow and difficult to skin over I had to laugh at how ridiculous it was. We went as high as was reasonable and transitioned to crampons. I looked up the couloir and the top looked deceptively close. It was a good 400m straight up and I had never bootpacked that far before. Matteo said that booting couloirs was exhausting and by the halfway mark I will probably want to die, so naturally I was ready for a good time. With our skis on our backs we started off. It was hard work but yesterday’s steps were still there to follow. It was a nice change after a morning of skinning; I liked the rhythm and I didn’t even have to bend over to eat the snow, it was already in my face. The last 100m was tough, the old boot track ran out so Matteo was breaking trail and even for me the leg burn was intense. I was motivated to move faster by the party of two that was quickly catching up behind us. When we had started the bootpack we had been alone on the glacier but every time I looked down there was another party at the base of Aussie gearing up to climb. We had timed it perfectly and my blurry vision from lack of sleep was suddenly totally worth it. 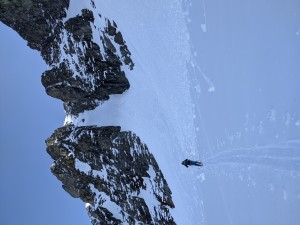 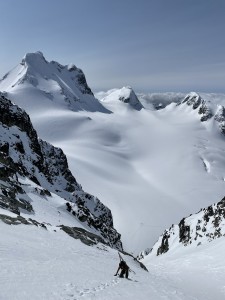 We made it to the top and Matteo ditched his bag and ran off to the summit of Joffre just a little further. I stopped to admire the view and the trail of people behind us. The guy behind me said “it looks like Spanky’s down there”. No kidding. I learned that they were planning on doing Matier after skiing Aussie and then hoping to be at their in-laws for dinner at 5. The guy called it the “Duffy triple crown for dudes in their 30s”. Considering it was around 12:30pm I would be impressed if they could pull it off. I went to join Matteo on the summit and he yelled at me to grab his harmonica out of his bag on the way. He played us a tune and while I laid in the snow and looked at the world around me. It was such a beautiful day and I was having Type 1 fun in the mountains! 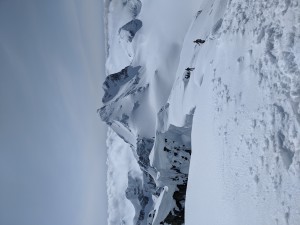 We looked over at Matier– from this angle it was particularly impressive. “Matier looks nice today,” Matteo said. “Maybe we should go climb it.” I looked at my watch. “We have 8 hours of daylight. Why not?” I said. So we packed up our shit and got our skis on. By this time 3 other parties had reached the top of the couloir and were swarming around. It was time to go. Matteo got the first line since he had made the boot track and I followed. The sun was finally hitting the slope and the ice was turned into beautiful spring corn. The turns were unexpectedly amazing. We passed a few groups on their way up and they took out their phones to film us getting the first line. Usually I go into the mountains to get away from people but everyone on Aussie was chilling, just happy to be there on such a nice spring day and I was happy to be one of them. Matteo, like the crazy Italian he is, straight lined the still-frozen avalanche debris at the bottom which looked quite painful as his bag bounced up and down on his back and his skis were deflected in all directions. “Whooo” he cried and cursed his Australian exchange student friend who was back in Van. “How do you like me now that I skied your couloir you c**t!”.

We ate a quick lunch on the glacier and I star fished in the snow. Matteo said if I do that I would never get up again. I was ok with that, why would I want to leave? We headed off back to the col to start our way up Matier. It really wasn’t that far but my legs and lungs didn’t like me any more and so the going was slow. There were a lot of people on the lower slopes of Matier and I didn’t really know what any of them were doing. It was like faff central. There were groups of snowshoers just standing in circles, people in crampons trying to walk the skin track back down to their bags below, people trying to transition to the bootpack and even a dude sliding down the slope on his butt, maybe for fun. I was more concerned with getting myself up the mountain. I was so tired that I told myself I would be allowed 3 seconds rest every other switchback for motivation. After a short skin we transitioned to crampons and bootpacked the rest of the way, which is when the clouds rolled in.

About halfway to the summit I couldn’t see anything above or below me except Matteo, who was following a bigger group of dudes in front of him. The boot pack was mellow though and I was not too worried about being able to see. The important parts were already white to begin with. I was certain I had never been that tired in my life, it hurt to breathe and I was getting very dizzy. But when we stood up on the summit ridge I was smiling. We had gotten to the top of Matier. And Matteo had dino gummies for me.

We sat on the summit for a little while with the other group of dudes hoping that the visibility would clear up. It didn’t. We were tired of waiting and decided to start the downclimb to the NW face which was our objective. It was spicier than climbing up. I am clumsy and crampons are spikey and on all sides all I could see was wind blasted snow falling into white abyss. It was a little dizzying but it wasn’t far at all and soon we all had our skis on. 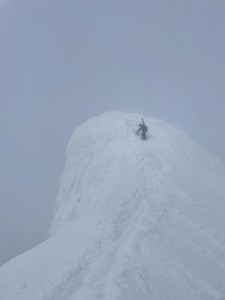 One by one the other party disappeared into the abyss, howling and shouting about the sweet powder. Although I couldn’t see more than 10 feet in front of my face, the snow that I could see looked soft and wonderful and very rad. My first turn was bliss and although I had to stop once or twice on the way down to save my legs I had some of the best turns of the year. The clouds were a blessing in disguise, stopping the sun from turning the slope into soup. It felt like February pow in April. We stopped to celebrate for a few minutes and then focused on the real business of getting out of there and back to the car. The only emotion that I could feel was ‘ugh’.

We really didn’t want to put our skins on so we side hilled around to the col and then skied down Anniversary which also gave us surprisingly awesome turns. The mountains were feeling very generous that day. Mentally and also physically I was very done and by the time we had gotten down to the boulder field I was done with skiing. My lungs were on fire and it hurt very much to breathe. Movement was a bad idea. Matteo said he would pull me out of there if he had to and I was inspired by his endless energy and shuffled along best I could. We got to the forest which was still an icy hellscape and I hit many tree branches on the luge track. We reached the creek crossing and I knew we were close. The last steps to the car were the best and worst and when we got there I was too tired to even want a celebration Spinosaurus. I sat down in the driver’s seat and smiled in satisfaction at our successful mission. 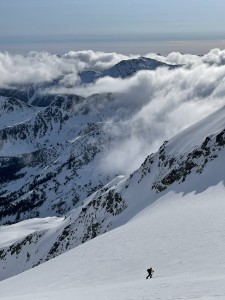 The whole way back I was thinking about how much I love skiing and how beautiful the mountains are. I was also thinking very much about Tim Hortons and all the donuts I wanted to eat. The whole trip took us 13 hours car to car and we skied around 2150m vert. Not a huge day by BC standards but it made me feel good and want to go bigger and better next time. It was a wonderful way to end the ski season on the coast before I leave for the summer and was definitely a highlight of the winter. I will be back next time for the Duffy Triple Crown with even more Dinos to get me through.