With the weather forecast looking prime and the mountains waiting for us, Marko Smitran and I set our sights on Gotha and Coburg Peaks. We started off our day by meeting at my house in North Vancouver, before proceeding to the Porteau Cove trailhead for the Howe Sound Crest Trail. A moderately early start of 7:15am got us to an almost empty parking lot and in no time, we were cruising up the trail towards Deeks Lake. 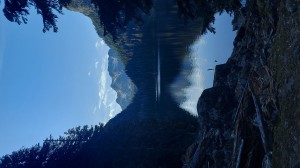 Deeks Lake with Brunswick looking nice in the background

After a quick stop for water at the lake, we continued on our way following the Mount Windsor trail until we arrived at the turn off towards Gotha Peak (Peak 5400). I don’t think the spiders liked me very much as I kept walking through their webs on this section of the trail. Very quickly after the turnoff, the route turns into more of a flagged bushwack than a trail. We diligently followed the pink flagging as it led us up to a nice meadow with a good view of Gotha’s summit ridge. Unfortunately, the bugs started swarming and assaulting us anytime we stopped moving, so we decided our next break had to be on the summit. The route traverses through a series of meadows until we arrived at the base of a short boulder field and commenced the ascent. Less than fifteen minutes later and we were at the summit (the false one). 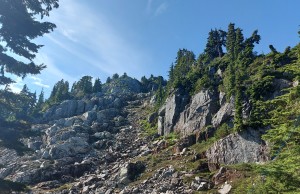 Boulder field leading up to the summit of Gotha

Both Marko and I were starting to get hungry, so we opted to break here before continuing a little ways further along the ridge to the true summit, which is only a couple meters higher. Both of us passed the time by continuing the time honoured tradition of naming as many peaks as we could spot. The views are glorious! 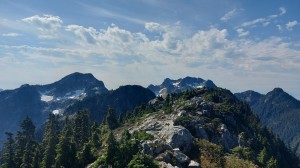 After devouring some trail mix, we made our way to the true summit and then followed the flagging and the cairns down to the col. The route is well flagged and features a mix of bushy hiking, easy scrambling, and veggie belaying. It is never exposed and it is obvious that somebody has put work into clearing the route a bit. Once we arrived at the Gotha-Coburg col, we went straight up the other side until we arrived at the crux of the route. 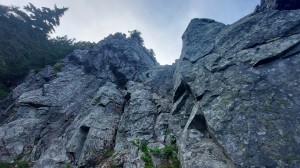 Base of crux of route up Coburg

We had read many different opinions on how difficult/exposed this section was, but recent trips had reported doing it with relative ease, so we were hoping for the same. From the base of the rock face, the route follows a large crack up to a ledge and then cuts to climber’s right underneath a slightly overhanging section. It is a very short section of 3rd class scrambling and you are never more than a few meters off the ground. After reaching the top of the scrambling portion, the rest of the flagged route to the summit involves lots of pulling yourself up with tree branches and pushing bushes out of your way. 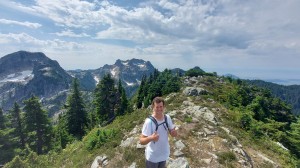 Marko posing while on the summit of Coburg 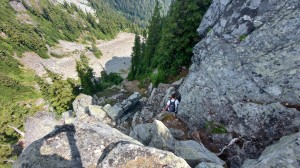 Downclimbing the scrambling section of Coburg on our way back

After relaxing on top of Coburg for a bit, we reversed our route back over to Gotha without issue and leisurely hiked down to the lake for a enjoyable swim. It was surprising how few people we saw the whole day (only 6), given that Deeks Lake is right on the HSCT. Overall a great day out in the mountains and its always nice to check off another peak from the Bagger Challenge, since both Marko and I are participants. 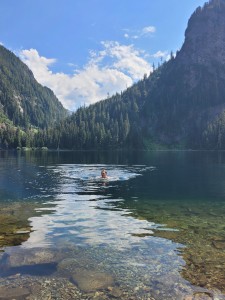