The plan for this trip was simple… more or less. There’s a mountain a couple of ranges behind the Tantalus called Tzoonie Mountain, it stands at ~2123m and a good 2 days walk from any access point. Thomas, the trip leader, did a lot of research to find the few existing accounts of summits on this peak and put together a topo trail for us to somewhat follow.

Tzoonie Mountain is named after the Tzoonie River, which flows below the mountain’s western flanks. ‘Tzoonie’ is thought to be an anglicization of the Shashishalhem word ‘Tsō-nie’ / ’T’sunay’, which actually refers to Deserted Bay in upper Jervis Inlet. The shishalh Nation now refers to the Tzoonie River as Kekaw.

The first recorded ascent of Tzoonie Mountain was made in 1939, led by BCMC legend Tom Fyles. John Clarke climbed the northeastern and eastern subpeaks of Tzoonie during a multiday solo mission in 1974. Klaus Haring and Robin Tivy made a winter ascent in 1994, although it is unclear whether they reached the true summit or the officially named northeastern subpeak. Peter Feichtner has led multiple trips to the area, and has probably been to the top at least once. Brian and Betsy Waddington once traversed the southern Narrows-Salmon divide with the intention of continuing over Tzoonie, but turned back at Ramona Lake. In 2006, four VOCers (sponsored by the ACC) made a heroic but unsuccessful attempt to climb up the west side of Tzoonie starting from sea level.

Day 1: Getting up at 4:00am isn’t always easy, especially when you’re leaving from your nice warm bed. However I had to catch the 14 bus to downtown in order to meet up with the rest of the group, Kate and Thomas, at 6:00am downtown. Once we all got together and got our gear in the car we were off to Squamish. I took the time to catch up on some sleep and before long we were bumping our way along  Ashlu A600 FSR to a BC hydro dam that proved to be our starting point. We took the Pokosha Pass Trail for about 8km before we said goodbye to the trail and hello to bushwacking. (Now, before the trip Thomas asked what type of fun bushwacking is classified as and I eagerly responded with “type one fo sho!” I quickly learned I would need to reconsider my perspective on that.) We ‘shwacked up and down a few ridges before we made it to a boulder field under a couple of waterfalls. After picking our way up the rocks along the waterfalls and onto the snowpack, we reached our high point for the day at about 1900m and 11km. From here we hiked down the glacier below Mt. Jimmy Jimmy and made good time hiking downhill  through the alpine meadows and hanging valleys until we made it into the next basin. No one really knew what to expect, as some satellite images showed wide open meadows, while the terrain map showed a swampy marsh. One thing was for sure, it didn’t matter what the terrain was, the bugs were out to eat. We hiked along the valley floor for another ~5km, getting our feet soaked and arms eaten by the relentless flies who tag teamed it with the mosquitos in the evening. After traversing a few more boulder fields and steep bushwacking we made it to Tatlow Lake and setup camp. After food and a nice swim we gave our bodies some much needed rest and tucked it in for the night. 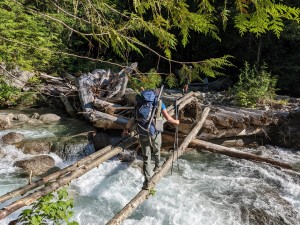 log bridge on across a washout on A600 FSR 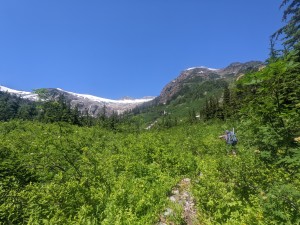 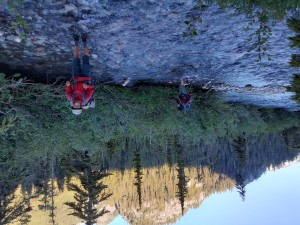 soaking our feet in Tatlow Creek 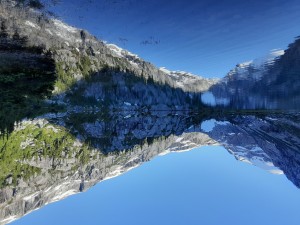 Day 2: We took a bit more of a relaxed start to the morning after the trek from the previous day and got started around 8:15am with considerably lighter loads as we would be returning to camp that night. We hiked to the end of the valley before scouting out a route up the unmelted remains of snow fingers that lead us to the top of the ridge. The technical terrain of ascending this first ridge took quite a while and we took lunch on the top at about 1900m. After dropping down about 300m we made it to the base of Tzoonie Mountain. Unfortunately the north side is covered in a glacier with many large exposed seracs and crevasses that we neither had the desire nor equipment to handle, especially in the hot weather. The plan was to traverse the southeast face, climb up and over the ridge to the southwestern face and gain the ridge from there. We made it around to the back of the mountain and to the ridge with a good pace and not too many time-consuming crampon transitions. There was a narrow gully that provided an optimal point to leave the snowpack and gain the ridge of the mountain. However the crumbly rock and steep sides made for some less-than-safe scrambling. Once we were on the ridge it was quick and easy scrambling to the top. We made it to the summit around 3:10pm and spent a few minutes celebrating our feat before making our way back down in order to make it back to camp before dark. The return trip was easy going more or less, and we made it back to camp for a nice swim and for me the best camp chili I’ve ever had.

Tzoonie Mountain from our lunch spot 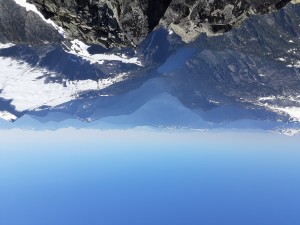 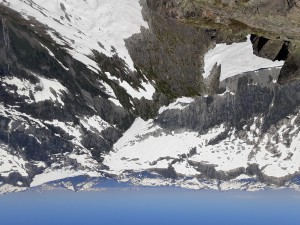 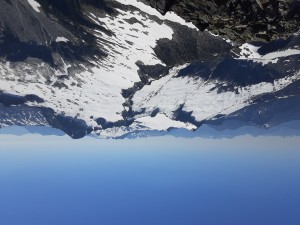 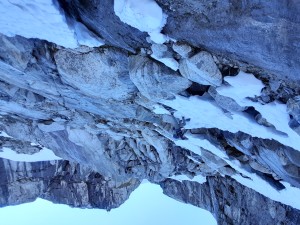 Day 3: Once we decided to split our return journey into two days we took day three as more of a chill day to enjoy where we were. We broke camp and started on our way back down to the valley, quickly remembering how much “fun” bugs and bushwacking is after the previous day’s absence. We followed Tatlow Creek until we had to turn uphill and face the steep hills back to the pleasant alpine meadows we knew waited above. After a few more hours of hiking we found a beautiful meadow next to a stream and set up camp for the day. As it was only a little after noon, Thomas took the rest of the day to climb Tatlow Peak, while Kate and I enjoyed just being in the mountains with an afternoon of reading, some painting, and just laying around appreciating where we were. We enjoyed the relaxing evening and fell asleep next to the babbling brook. 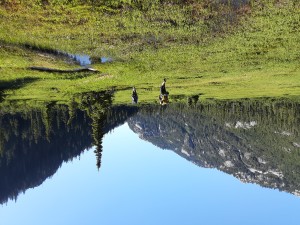 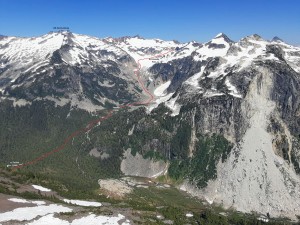 our day 3 campsite seen from the summit of Tatlow Peak

Day 4: Alpine starts are a lot easier when you can wake up and be surrounded by mountains. After a ~4:00am wake up we made our breakfast, learned that mosquitoes don’t care what time of day it is, and broke camp to start on our ascent of Mt. Jimmy Jimmy. We followed our route from the first day, making our way up to the bottom of the glacier before donning our crampons and preparing for the 500m of vertical to the top of Mt. Jimmy Jimmy. We summited the 2208m peak with great joy and excitement around 7:40am and spent some time enjoying the views and taking in the beauty of the peaks surrounding us. After Mt. Jimmy Jimmy we dropped back into the bowl the glacier sat in and back up to the ridge that was our high point for the first day. On our way back down we got lots of practice boot skiing or butt sledding, and made our way down the waterfalls and back to the Pokosha Pass Trail. At this point we were all quite tired and decided to push on without lunch until we made it to the car. The trail seemed a lot longer on the way down, but eventually we made it around 2:00pm and just to some time to sit, eat and drink lots of water before we hopped in the car, turned on some music and blasted the AC which was sorely missed after 4 days under the hot sun. We managed to make it back to Vancouver missing most of the traffic and parted ways with Kate downtown. Thomas and I took the bus back out towards UBC and said goodbye as our adventure drew to a close. 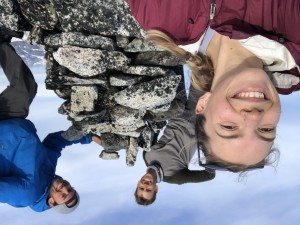