The Plan: Shuyu announced that she wanted to do the Alcoholic Traverse and she needed a ride back to her car at the end of the traverse, so we figured we might combine this with a trip to Brew Hut. By the time we were decided and packed, Shuyu had cancelled her Alcoholic. Carla and I decided to drive up Friday afternoon, dine at McDonalds in Squamish, and tent at the Roe Bridge. We would spend Saturday night at the hut.

Friday went as planned, except an important screw fell out of my glasses, and at one point the Neurotic Jeep decided it just didn’t want to start. Already the mosquitoes were fierce. The magnificent stars kept us awake, but at least it was cool.

Saturday we were on our way by 5:45. Bugs were having us for breakfast. By 9am we were where we used to drive to before the Authorities deactivated the road. At the trail head we got lost briefly in the ferns and fireweed. At Brew Lake I mentioned that we should have brought bug nets, and Carla pulled one out of her pack and gave it to me. Carla unfurled her umbrella. We found that putting snowballs into our pants pockets was pretty good for keeping cool. We arrived at the hut at noon and had a nap. 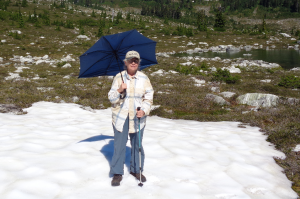 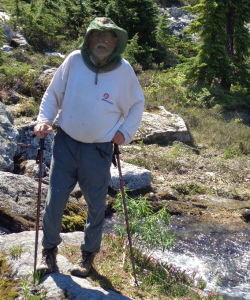 Eric, Ulla, and Charlie arrived at 2pm, via the trailer park trail. Eric and Charlie were very tired. Ulla wasn’t tired. Charlie played “dead dog” except every time somebody opened the door he played “guard dog” and barked quite loudly. Sign on the wall said “no dogs” but Eric assured us that he had asked and dogs were OK. Ulla offered to sleep under the table so that Charlie wouldn’t spend all night trying to climb the ladder.

Lucy, Alberto, and Richard arrived at 4pm, via the route from Brandywine that Ross and company spent so long rejuvenating last summer. They planned to do the Alcoholic and retrieve their car which they had left at the Brandywine road.

Sunday: Again we were on our way by 5:45. I stopped to tighten my boots and something snapped in my lower back. Carla took most of the weight from my pack and she waited patiently for me. We didn’t set any speed records on the way back. We encountered ten people heading for Brew Lake for swimming. At the Jeep there were six cars parked and tents but no people. A sturdy Jeep Rubicon came up and turned around beside us. I went over to congratulate their jeep for being orange and it turned out that neither of the people in the Jeep could talk (what we used to call deaf and dumb but I don’t know if that is politically correct any more). I used my negligible sign language and they seemed delighted that I had come over to “talk”. We turned on the air conditioner in our Jeep and Carla drove us home.

What we did: Re-installed the screens on a couple of windows to let cool air in. Brought the donated money down. Washed some windows and the mirror on the solar light (light is working well) using hand sanitizer and toilet paper. Gathered up abandoned junk and put it in the heater. Tested the new outhouse; the old one is bolted shut. Hut seems in good shape.

What we didn’t do: Somebody with loppers could take out the ferns and fireweed that make the trail very hard to find in the summer. Somebody could hang about 30 more reflective markers for the winter; this is a good time to do this as the trail is easy to follow when there’s no snow. A can of spray paint would improve the trail across the “rock gardens”. If the Phelix Porch Painters are looking for work, they could haul up another gallon of paint but I don’t think this is high priority. Coleman stove needs to be washed as it is extremely greasy. If the hut is popular this winter, we need a crew with a chainsaw to cut firewood. We didn’t climb Brew the Mountain, as it didn’t need climbing.

What we learned: Perhaps going up there on the hottest days of the year is not wise. We should have brought more DEET, more suntan lotion, more bug nets.

This entry was posted in Hike, Huts, Trip Reports, Workhike. Bookmark the permalink.