God has you on toprope: gumbies in the Eldred

After months of intense planning and obsessively searching for beta on the only website that contains it (shoutout to Powell River Rocks!) our group of overly stoked gumbies finally made the trek into the dense forests of the Eldred valley. We entered naively and optimistically despite most of the group’s limited encounters with slab, and emerged bugbitten and humbled.

Rosalie, Ewan, and I left Vancouver around 3pm on Friday, ferry hopping to Gibsons before jumping into Justin’s car. He had sacrificed himself to bring all of our gear across the previous night, using the last bookable ferry spot. Brian and Lucy had left earlier, hoping to successfully navigate the delicate dance of ticketless ferry hopping before a long weekend.

Once we got to Earl’s cove, I celebrated our success by popping open several White Claws as we drank in the views. 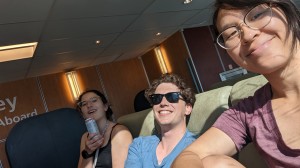 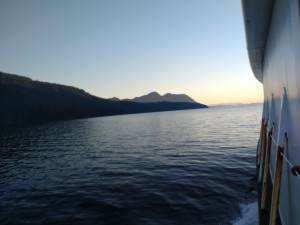 After a bumpy ride up 40kms of logging road north of Powell river, we arrive at the campsite, shocked and relieved to find that Lucy’s tiny VW golf had made it up, duct-taped bumper intact. It’s already nearing 12am at this point, and we stumble tiredly into camp to try and find Lucy and Brian as they had all of our food in the car. After a brief snack Rosalie and Ewan slip into their tents while I head back to sweat in the sauna of Justin’s hotel Subaru.

We had agreed to regroup in the morning and tackle the moderate route on Psyche slab — a 5.7 called Tachypsychia. Brian and Lucy had already started up before the rest of us, eager to send the route before the sun came out. We’d been advised many times to start early and beat the summer heat, which could be “shoe-meltingly hot” on southern aspects.

After a quick breakfast in the camp area, we pack up our trad gear and start what we believe will be a trivial approach to the slab. The beta was to go to the top of the logging road and turn right onto a “well marked trail” but after several false starts and brief turnoffs into bushwacky garbage we realize that we are about 1hr into the approach to the wrong crag. 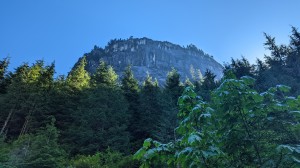 Wrong crag. We missed the forest for the trees… 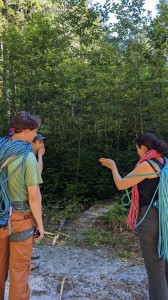 Justin realizing that we missed the turn by 1m from the camp exit.

We finally make it to the right area, and start up the approach to the climb. It’s steep, rocky, and getting more miserable by the second as the sun starts to beat down on us. We finally make it to the base of the climb 3 hrs after starting what should have been a 15 minute approach from camp, drenched with sweat and dreading the ascent of what promises to be very hot slab.

Lucy and Brian are cranking away a few pitches above us, and seeing them reassures us that we do indeed have the right route. We split up into two climbing teams: me and Justin, and Ewan and Rosalie. I start us off by leading the first pitch of chill, mindless climbing that Ewan affectionately refers to as “happy trad”. 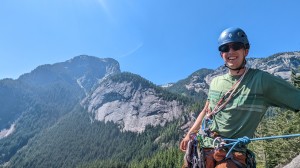 Honestly there is not much to say about this route other than it is a true moderate, made for the 5.6 climber (if the climber does not mind placing 2 pieces of pro per 50m pitch and slinging a loose shrub or two). We made it to pitch 5/7 before reaching a group decision to bail, as the heat had become intolerable and we were unwilling to suffer any longer on a mediocre route. We rapped down in the late afternoon heat and discovered that “shoe-meltingly hot” was not an exaggeration.

As luck would have it at one point in the rap sequence we forgot to remove the knot before pulling the rope and Ewan had to solo up some sketch bits to retrieve it.

Back at camp we regroup with Brian and Lucy, who had actually finished the climb, and go check out the beautiful rushing river where we have some cold beers. 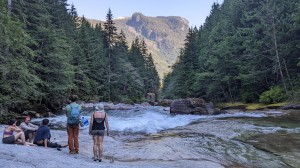 This river is incredibly refreshing to swim in, although you have to be pretty careful about picking a spot since it’s very fast-moving and powerful, and could easily sweep you away.

We relaxed by the river and discussed our plans for the next day. We’d be attempting a 12 pitch route titled Schizophrenia, which was supposedly “well protected for the Eldred” and featured some mixed Trad/Sport moves of 5.9 with a 10a crux. We would have to wake up very early to start this according to the guidebook, in order to avoid the heat. After our experiences that day we agreed that a 4am start would be the most prudent.

After another miserable and sweaty night in Justin’s car we wake up to the sound of our 4.30am alarm and walk to camp to make a quick breakfast. My brain is completely fried from the heat and I am just not functional that early in the morning, so while Lucy, Brian, Ewan and Rosalie manage to get going I end up forgetting various items here and there and running around camp retrieving them. To Justin’s disappointment, we show up last to the climb, and rack up while watching Brian give the 5.7 slab a go. We’re all itching to get on it –quite literally — as mosquitoes are swarming us while we wait.

The first clip is about 5 meters or so into the climb, so when he looses his footing before the bolt and cheese graters himself down the slab everyone is a tad spooked. Brian runs off into the forest with little explanation. It’s only later that I find out he quite literally took a shit-inducing whipper and needed a stealth poop to “release the tension”.

Ewan bravely starts up the 5.7 pitch and tops out with ease. Rosalie follows, and then it’s my turn to lead. 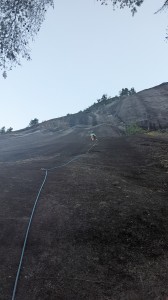 Once we’ve all finished we take time to chill at the belay since we know that the next pitch is the crux, and the closer we get to it the less motivated we are to do it. It’s well bolted but incredibly tricky slab, with some spicy pick-your-own adventure placements once the bolts run out. Rosalie and Justin are the two best climbers in our group so it’s agreed that they will take us up it. This pitch takes the most time, but we eventually top out. I decide that the crux is not 5.10a to make myself feel better about aiding on a cam.

Ewan decides at this point that leading sketch slab is decidedly NOT happy, and allows Rosalie to lead up the remaining pitches. I, too, would get incredibly sketched out on P5 and leave the leading up to Justin instead of swinging leads.

Soon we lose sight of Lucy and Brian down below. Later we learn that they made it up the 10a but decided to call it day there.

We go up some incredibly thought provoking and fun pitches, including a dihedral that you climb by underclinging with your hands and sliding your feet up one by one. As we move upwards there is an increasing (and concerning) amount of slab, which Justin and Rosalie greatly enjoy. This is only mine and Ewan’s second time climbing slab because we had previously gone to great lengths to avoid it, so we are endlessly fascinated when we place our feet on something that is not a hold, and do not slip off.

It really feels like you shouldn’t be able to do these moves, but then you do! Sorcery. 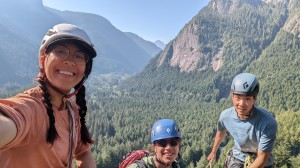 As the day gets hotter and the slab gets slabbier, our brains liquefy and mingle with the buckets of sweat that we are sweating. We climb pitch after pitch of undulating slab so hot that I can barely touch it. Somewhere around pitch 7 it’s decided that Ewan and I will bail while Rosalie and Justin and continue sating their thirst for slab. 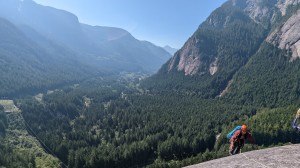 The ground is lava.

We begin the rap sequence down the rock and I am reminded of playing “the floor is lava” as a kid, except this time, the lava is the rock, and the air, and existence itself. I begin to feel as if I am slowly losing my sanity and, in a brief moment of clarity, realize the most probable way that the route acquired its name.

Ewan and I finally touch dirt after about 2 hrs of rapping, and hightail it back to camp where we submerge ourselves in the river and promptly pass out on the still-hot river rock next to Brian and Lucy. We wake up in time to see Justin and Rosalie come in to camp. They had only done two more pitches, as the slab became even more runout. According to Rosalie, it got to the point where you had to routefind to see the bolts, and she had just led the most runout 5.9 of her life trying to top out of a pitch.

At this point everyone is hot, tired, and slightly sketched out, so we decided to go back home the next day. That evening, we take our time to enjoy the beautiful campsite. Brian takes some insanely good long exposures of the river and we have some hot chocolate around the campfire in the evening. 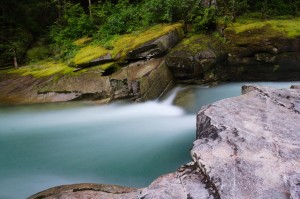 One of Brian’s long exposures.

All in all I think everyone enjoyed their time there, and it was agreed we would return with more experience and higher tolerance for runout to give some other routes a try. The Eldred Valley is incredibly beautiful, and the river, old-growth forests, and surrounding big walls are an incredible slice of nature that I will always dream of returning to. 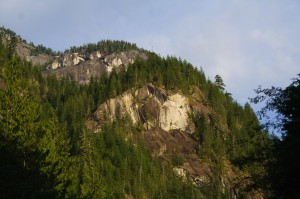 Mmm, who doesn’t want to do a few pitches of A4?

One Response to God has you on toprope: gumbies in the Eldred