Back on Cowichan Valley Trail

This trip took place on the traditional territories of the Coast Salish First Nations, including the Tsawout, Songhees, Esquimalt, Malahat, Cowichan, and Tsartlip.

Last year, I lead a group of VOCers on a bikepacking trip along the Cowichan Valley Trail on Vancouver Island. Unfortunately, we were not able to complete the route due to a medical emergency after someone crashed going down a loose gravel hill. Since then I have always thought about making this route more chill, more fun, and more safe. So when I heard my friends talking about trying out an easy overnight bikepacking trip on the weekend, I jumped on the opportunity and convinced them that this is a beginner-friendly option.

The Cowichan Valley Trail is a network of multi-use trails in Southern Vancouver Island, connecting Nanaimo and Victoria. It was made popular by the Cowichan Valley 8 route on bikepaking.com. In order to make this route chill, fun, and safe overnighter, we needed to make some changes. First, no highway, so no coming down from Nanaimo. Next, no cycling to the Tsawassen ferry terminal either, which usually take half a day, thankfully the new bike bus from TransLink had made this possible. Finally, not wanting the stress of getting turned away by BC Parks, we found another private campsite on Facebook. 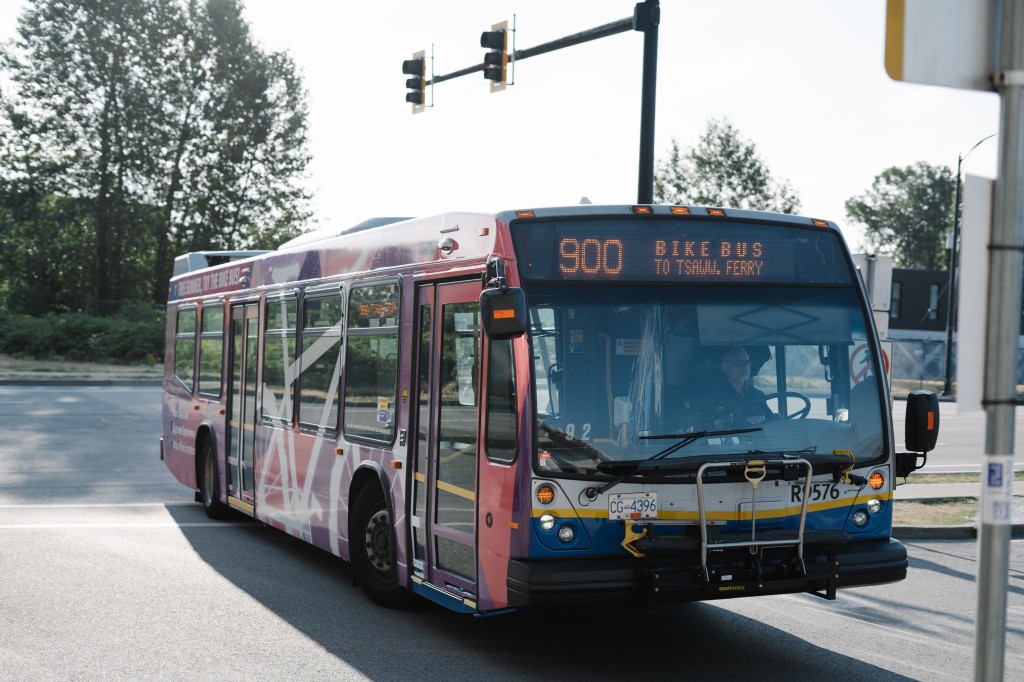 At 7 am, I met the group of 5 women in STEM (Cara, Cecile, Elvira, Ruth, and Mary) at the Bridgeport bus exchange in Richmond. We arrived a whole hour early to make sure we get enough spots on the new bike bus. The bike bus is a new pilot program from Translink that features a modified bus that takes 9 bikes between Bridgeport and Tsawassen ferry terminal every hour. Slowly, other bikepackers also began to arrive at the bus stop. When the line became longer than 9, we had some difficult conversations with the latecomers. 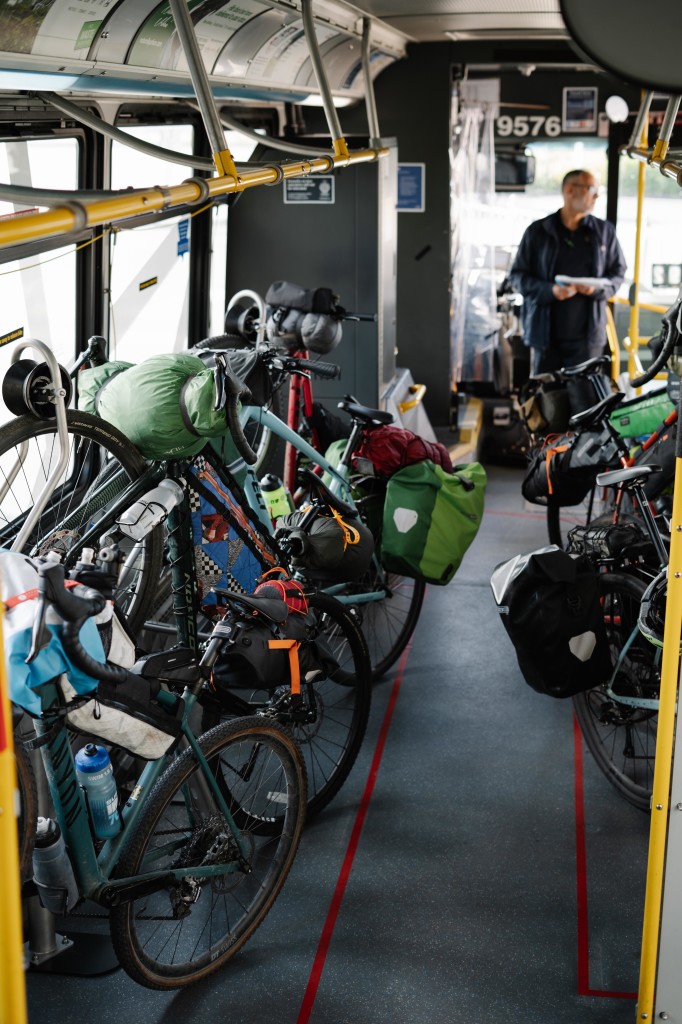 Inside the bike bus

An hour later, the bike bus arrives and it was glorious. We were so excited to be able to experience this new marvel of public transportation. The bus reduced the 3 hours journey down to only 30 minutes, dropping us at the terminal right when we need to board the ferry. Being a proud member of Expo Line Memes for Translink Oriented Teens, I encouraged everyone to leave positive feedback for the bus, hoping that they will make this pilot permanent. 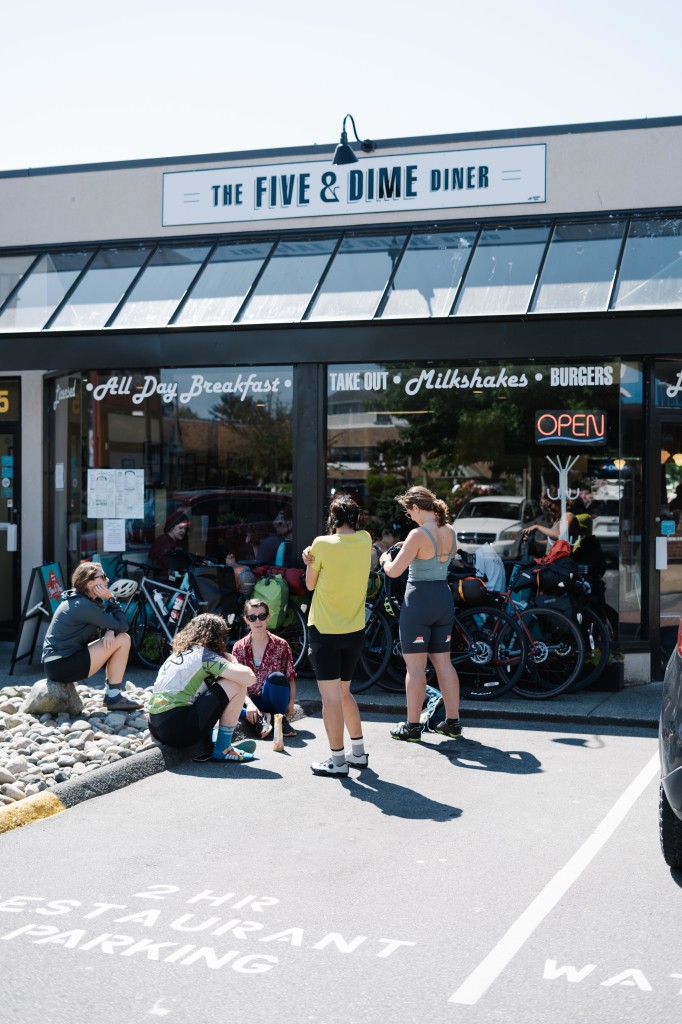 Athletes waiting for their breakfast potatoes

Greeted by beautiful sunny weather in Swartz Bay, we casually made our way south on Lochside Regional Trail toward Victoria. After a quick tourist stop for the parliament building and ice cream, we headed west on the Galloping Goose Trail. So far, it had been a chill ride going along the coast and through farmlands on some smooth pavements with very little elevation. 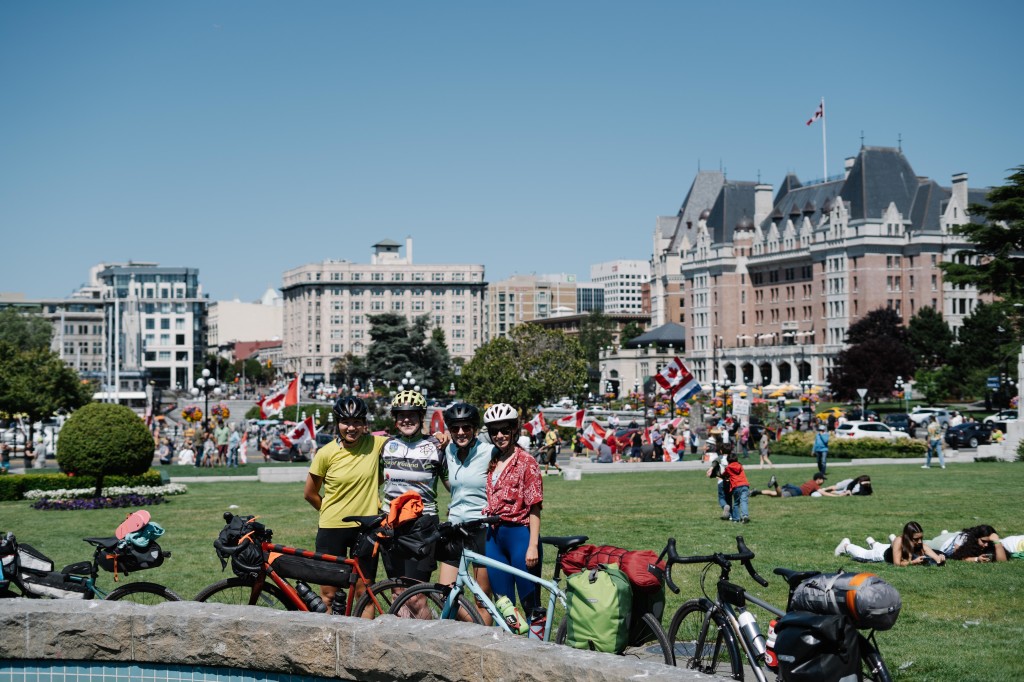 We got a welcome party in Victoria

Then, I made one of the biggest mistakes in my trip-leading career. Followed my bike computer, I warned everyone to be prepared for some steep hills ahead. After climbing a hill and descending to the other side, I saw the sign “Goldstream Provincial Park”. It was at this moment that I knew I messed up. When I told the girls that I have accidentally led us over the wrong hill, they all laughed thinking I was joking. But then their smile quickly changed as I tell them we have to climb back to the other side to return to the route. 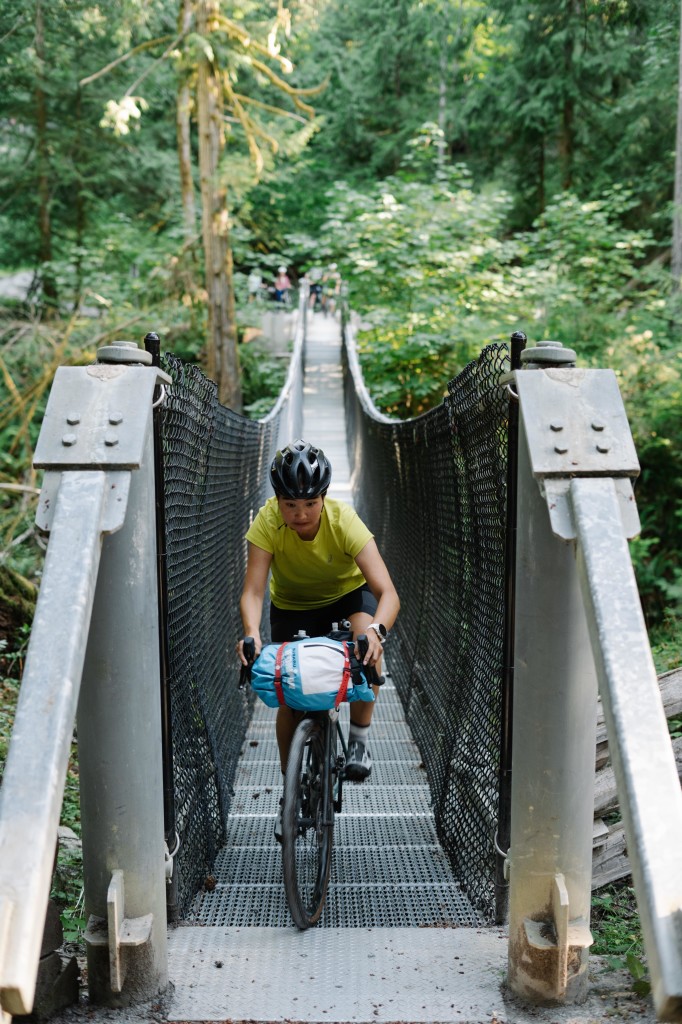 6 pm, we arrived at the Sooke Hills Wilderness Trail and got our first bit of gravel. Less than 100m in, Mary crashed. While she quickly got back up on her bike, the incident reminded us to be careful cycling on loose gravel. The trail teased us with some windy gravel roads, lush forest, and a lovely suspension bridge, before hitting us with a straight 400m climb. The trail went through Victoria’s water supply area, so there were many signs telling us to stay on track. Some of us got off to push our bikes while Elvira sprinted for the top. After the relentless hills, we reached Goldstream Heights, where we had a great view of the ocean and downtown Victoria. As the sun began to set, we came across our crash site last year. Elvira and I spent a moment reflecting on and sharing the experience we went through together on the night of the accident. 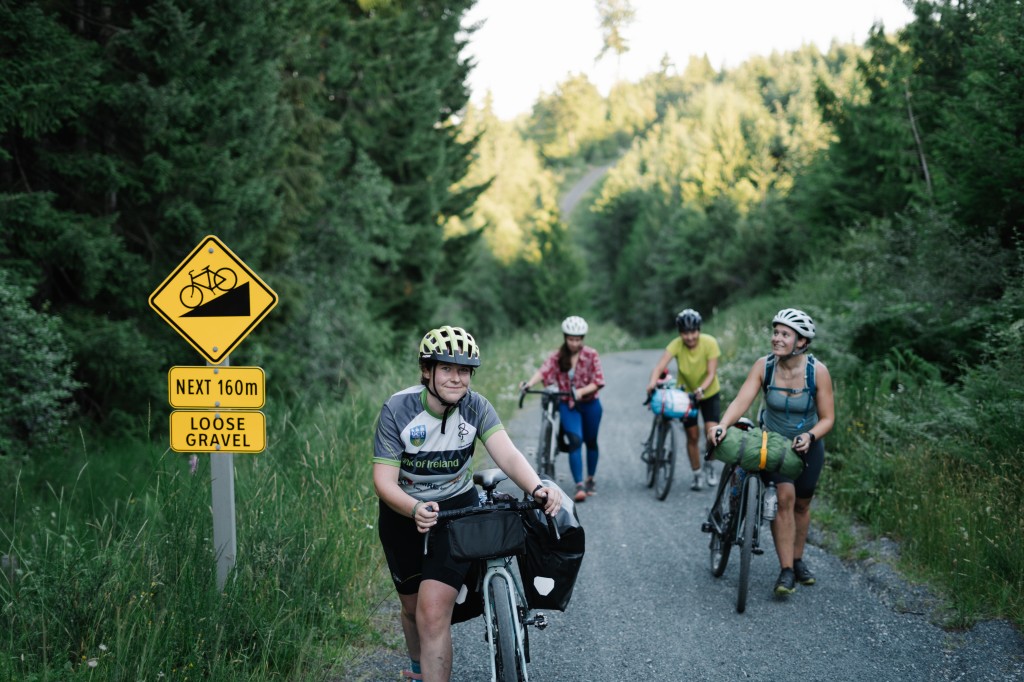 No one is running up this hill

For the descent from the top, I gave the girls two choices, go on the road down Gold Stream Heights Drive, or continue on the gravel trail down the Cowichan Valley Trail. Since it was already 8 pm and the sun was on the horizon, everyone opted to take the road. It was perhaps the most beautiful descent I have ever experienced. The breeze was chill, the road was smooth, Lake Shawnigan was glistening in the distance, and the entire sky glows a warm orange. It was so mesmerizing we all forgot to stop and take pictures. Once at the bottom, we spent a few minutes absorbing what we had just witnessed into memory. Finally at the top

Once we were back onto the trail, I pulled some oddly specific instructions from the campsite hosts on how to find them. We were supposed to look for a bridge, a big rock, and a piece of paper on a tree. The instructions felt like a guide to a secret treasure but we eventually found the turn-off point onto an overgrown single track. 10 minutes in, Cara spotted a black bear and her cubs ahead of our track. It was 9 pm and turning around was not an option, we decided to press forward. With bear sprays in our hands, we began shouting as we walked toward the bears. Thankfully, they yielded and moved over to the side of the track as we passed through. 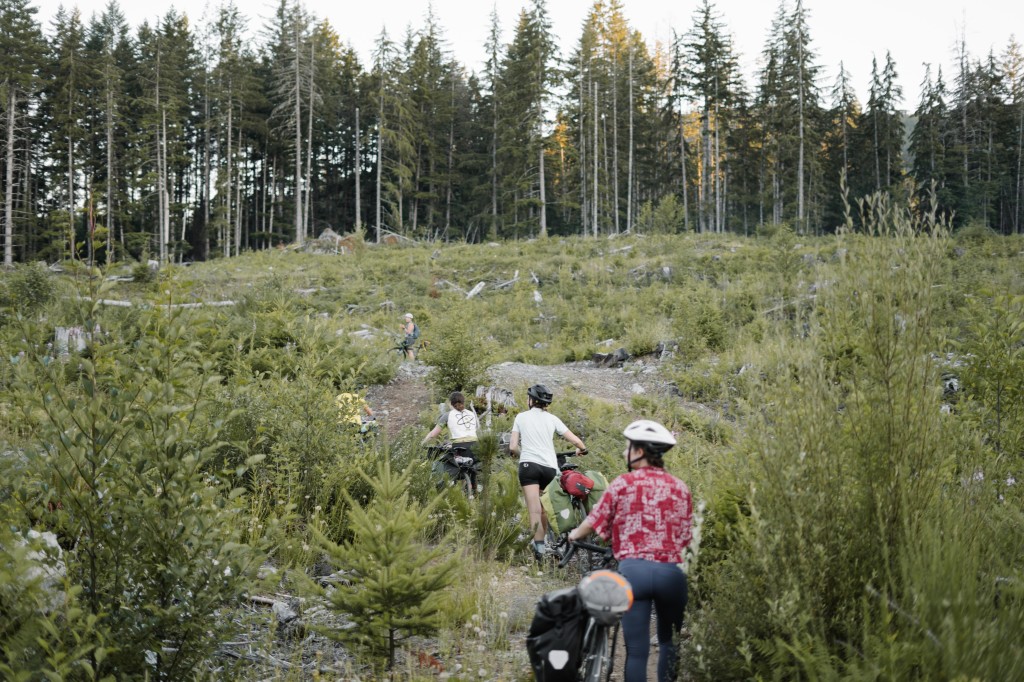 Cara shouting about some black bears

As we got further into the trail, we noticed a few shotgun shells on the ground and some private property signs. We thought to ourselves, “what are they gonna do? Shoot us?” Then came a sign that said, “trespasser will be shot”. We were definitely getting horror movie vibes, but we pressed on anyway.

Finally, as the sun set, we arrived at the sign for the farm. After walking around and finding no one but some horses, we settled in around a fire circle. A bit later the hosts, Conny and Gary came out on a buggy to welcome us and bring us some firewood. They warned us about the bears. Turned out that was what those shotgun shells were for. 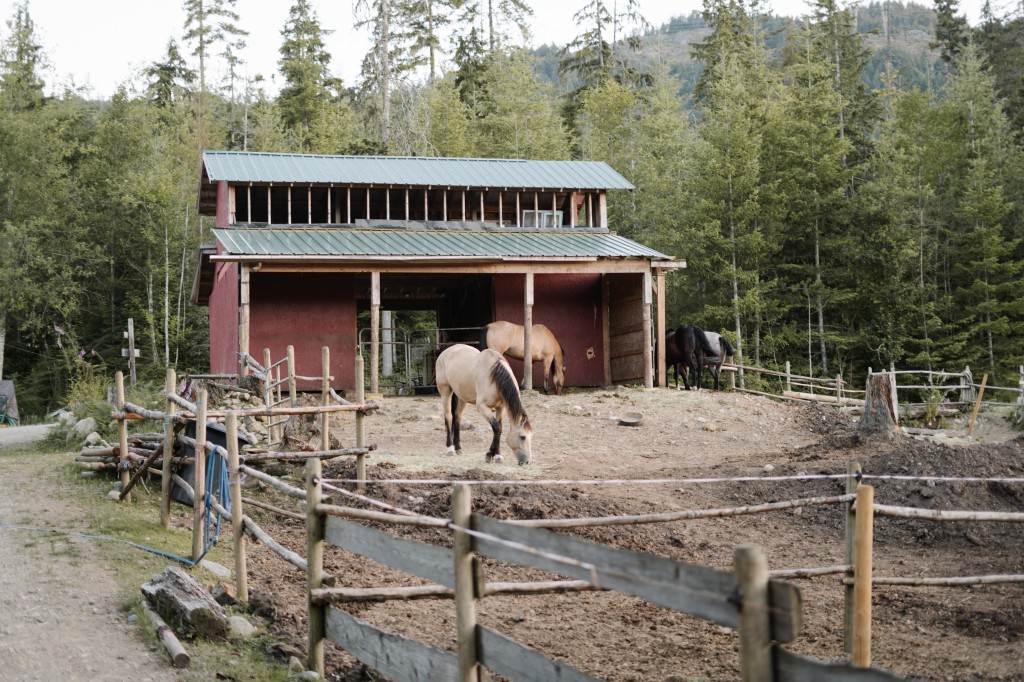 At the campsite, Cara and I were tasked with getting water while the rest prepare our tents and dinner. Following the instructions from Conny, we rode toward the water tank with 20 bottles stashed on our bodies and bikes. Suddenly, two extremely aggressive dogs ran out and started to bark at us. We tried to back up but they kept following, so we stood our ground. Thankfully, Conny and Gary came out again to save us. The water tank wasn’t covered and had stuff floating in, so it was quite questionable. However, besides having some strange smell, none of us got sick from it.

We returned to our campsite following a fantastic smell of dinner, prepared by chef Ruth, who had made us all some chickpea curry on rice. I don’t know if it was because I was starving but dinner was absolutely incredible. For dessert, we sat around our campfire and roasted some marshmallows. We don’t usually have the opportunity to do this due to all the fire restrictions throughout the year in BC. 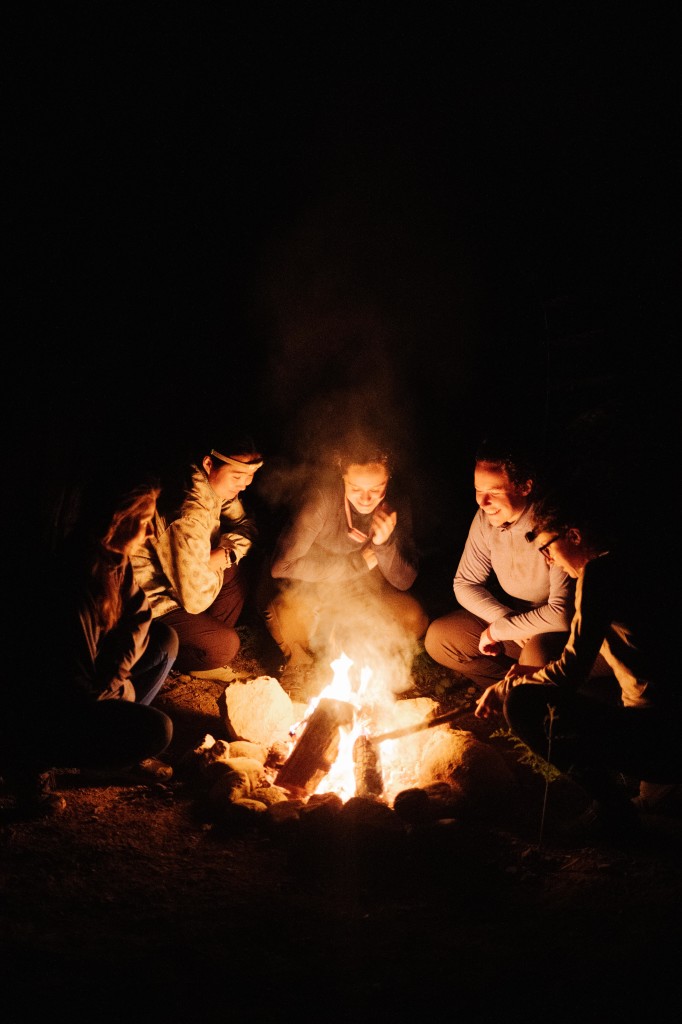 A few weeks before another fire restriction

The next morning, Ruth and I went to get some more water. Frustratingly, the dogs came out again! This time, there was no Conny or Gary, so we just accepted to stay thirsty and backed out. Later, as we were leaving, Gary came out and gave us a tour of the animals. The girls had so much fun petting the pigs that we left an hour behind schedule. The farm was a great alternative to staying at a provincial campground. I would definitely come back here for another bikepacking trip. Elvira was a vegan for 6 hours after this

Cycling north on the Cowichan Valley Trail toward the Kinsol trestle, we came across many other cyclists and hikers. The trail was completely empty the day before. The gravel here was also more fine and flat, making a more pleasant riding experience. 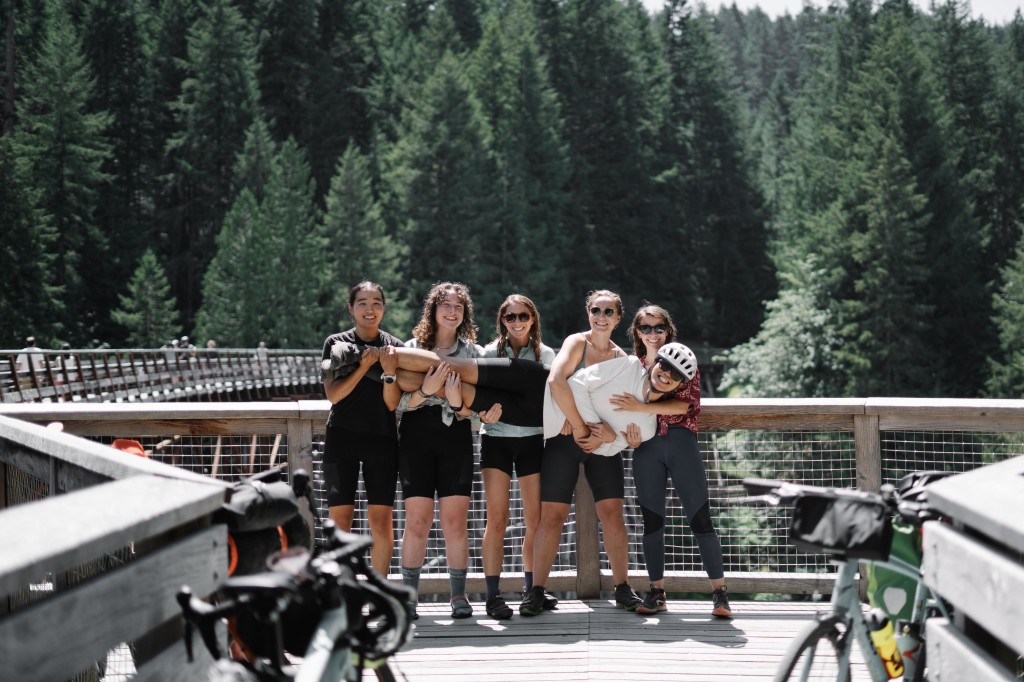 Group photo at the Kinsol Trestle

While we were along Lake Shawnigan, Ruth thought it would be great to stop and go for a swim. This stressed me out a little bit as we were already behind schedule for the ferry. At the beach, Cara commented that it felt like the Italian Riviera, while Ruth said it was more like the Portuguese Camino. I have never been to Europe so I wouldn’t know. A quick dip in Lake Shawnigan

After rushing everyone out of the water, I had to reemphasize that we had a ferry to catch. We sprinted toward Mill Bay at 30km/h and actually ended up right on time. It’s not an Island bike trip without some ferry chasing. At the terminal, the steward suggested that all the cyclists on the ferry should group together and split a ticket book for almost a 50% discount. He was so funny and friendly. Somebody make this man the CEO of BC Ferries. On the ferry back from Swartz bay, we got to see a whale, thanks to Elvira’s whale spotting knowledge. As the ferry approaches Tsawassen, we realized that most of the cyclists onboard would also be going for the bike bus, so we plotted to get ahead. When the ferry arrived, all of us rushed to the bus exchange. While getting settled on the bike bus, some other cyclists who didn’t make it got visibly upset with us. We told ourselves that it wasn’t our fault to blame but inadequate cycling infrastructure. I hope that Translink will make the bike bus program permanent and increase the trip frequency.

That said, the trip wouldn’t have been possible without Translink and BC Ferries. I am grateful to be living somewhere that has access to the great outdoors without having to drive. This 134 km loop makes an incredible route for cyclists who wants to try out bikepacking for the first time. It starts and ends in Swartz Bay ferry terminal, making it transit accessible from Vancouver. There are many scenic and interesting stops along the route, such as Victoria, Goldstream Heights, Lake Shawnigan, Kinsol Trestle, and Brentwood Bay. It follows multiple established cycling trails, featuring a variety of road surfaces of paved, gravel, and single track, which can all be tackled on a road bike with large tires. With many different lodging and camping options along the way, one can easily complete this route over a single night.

One Response to Back on Cowichan Valley Trail