Got on the road at 7:30ish and made it to the rangers station in Marblemount by around 10 where I borrowed a bear canister and bought an extra fuel can. I then drove about an hour on Washington’s scenic highway 20 before making it to the trailhead to start hiking around 11:20. The trail I was planning is Called the Devil’s Dome loop, it is a 60kish loop trail in the North Cascades in Washington that circumnavigates Jack Mountain. The easternmost 40k are spent in the Pasayten Wilderness on the Jackita Ridge and Devil’s Ridge trails, the remaining 20k are spent in the Ross Lake National Recreation area on the East Bank Trail.

In order to do this loop in the counterclockwise direction, I started off east on the East Bank Trail. This meant I would be starting my hike in the more rugged and less maintained trails of the Pasayten Wilderness which have a lot of elevation change, and ending my hike in the flatter trail along Ross Lake in the Ross Lake National Recreation area. The first 5k or so didn’t have too much elevation gain or loss, although it was very hot despite being right next to Ruby Creek. I was also lucky enough to stumble upon some wildlife: both a Salamander and a snake! 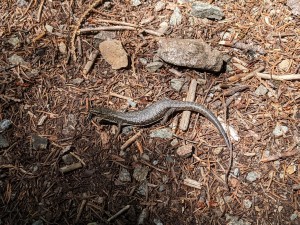 Salamander? At least I think it’s a salamander 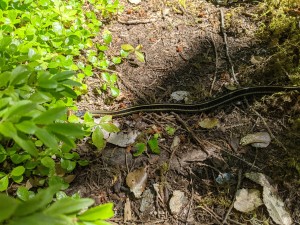 After about another 5k and 1000m of ascent, the trail flattens out to go through vast and sprawling meadows with terrific views of Crater Mountain and plenty of wildflowers to admire. Continuing on a little bit farther the trail dips before rising again into another meadow where there is an emergency shelter and many places to camp. 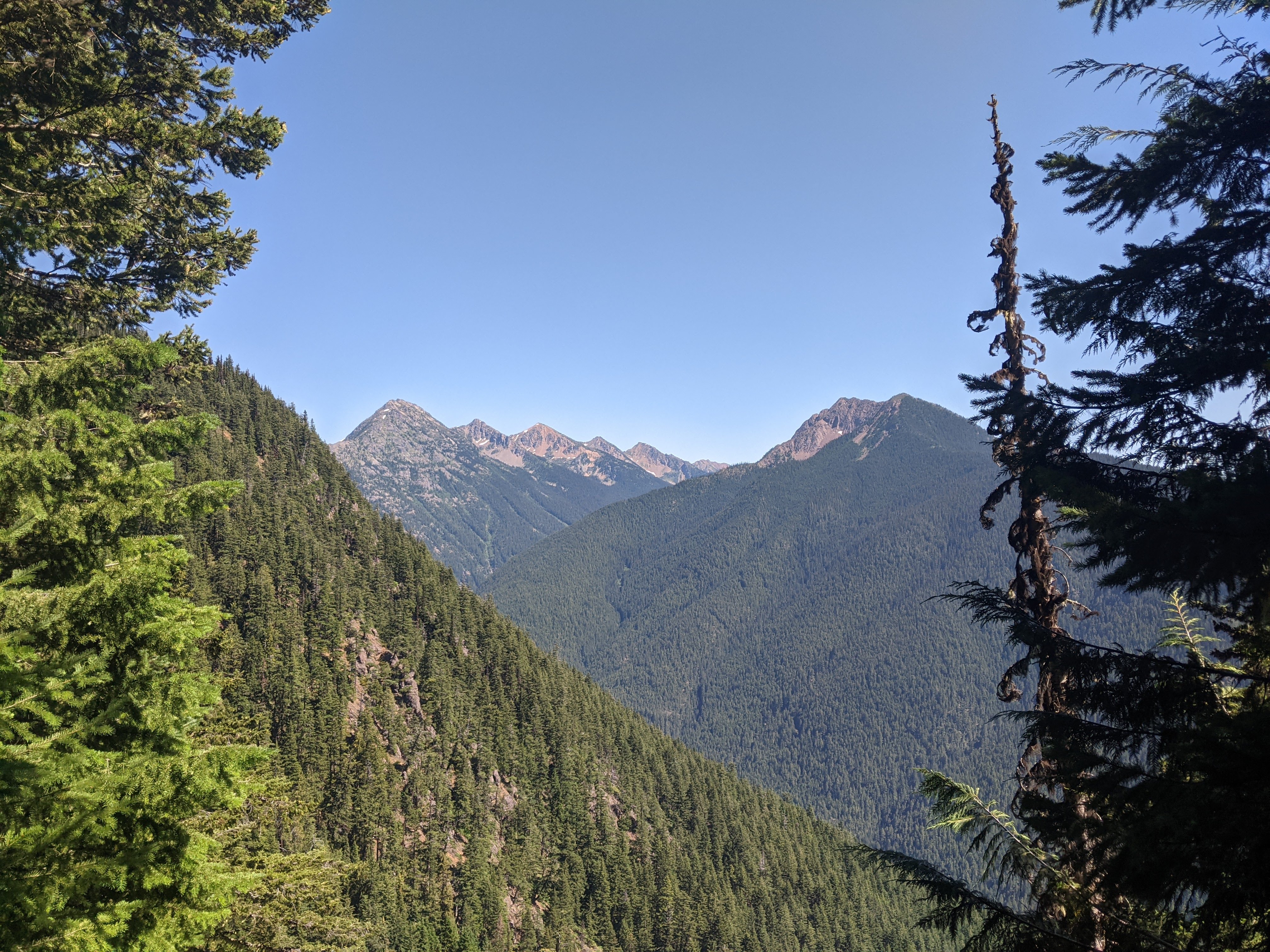 Looking east into the Pasayten Wilderness from the trail 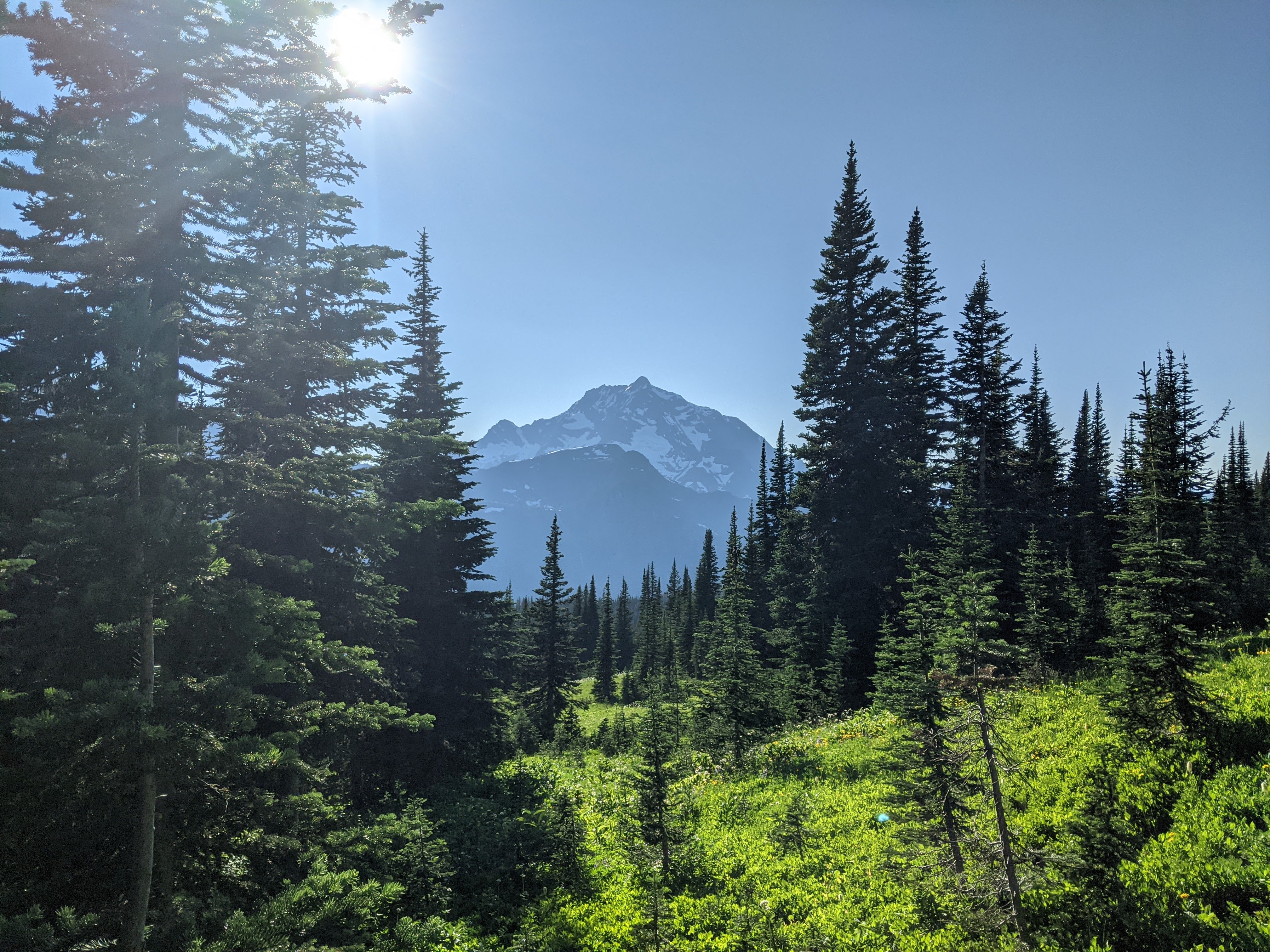 Since this section of the trail is in the Pasayten Wilderness (which is not part of a National Park) instead of the Ross Lake National Recreation Area (part of North Cascades National Park) there are no official campsites, outhouses, or fire rings. Although, there were plenty of previously used camping spots all along the trail. I decided to have my dinner here and fill up on water at the closeby stream before heading up a little farther to camp up on Jackita Ridge, where there would be no water source. Unfortunately, I think the mosquitos sucked just about as many calories out of me as I took in – they were pretty brutal.

I walked another mile or so on the trial before heading off trail and hiking a few hundred more meters up the Ridge. Once I stopped moving and got my tent set up, the mosquitos returned with a vengeance. I have no idea where they were coming from since I didn’t see any standing water, and I was on top of a dry ridge at 2000+ meters elevation with only a few trees, but they were certainly coming from somewhere. Despite the wind blowing very strongly, the despicable insects would just take shelter on the leeward side of my body or tent, I counted 25+ that I killed after entering my tent just once. 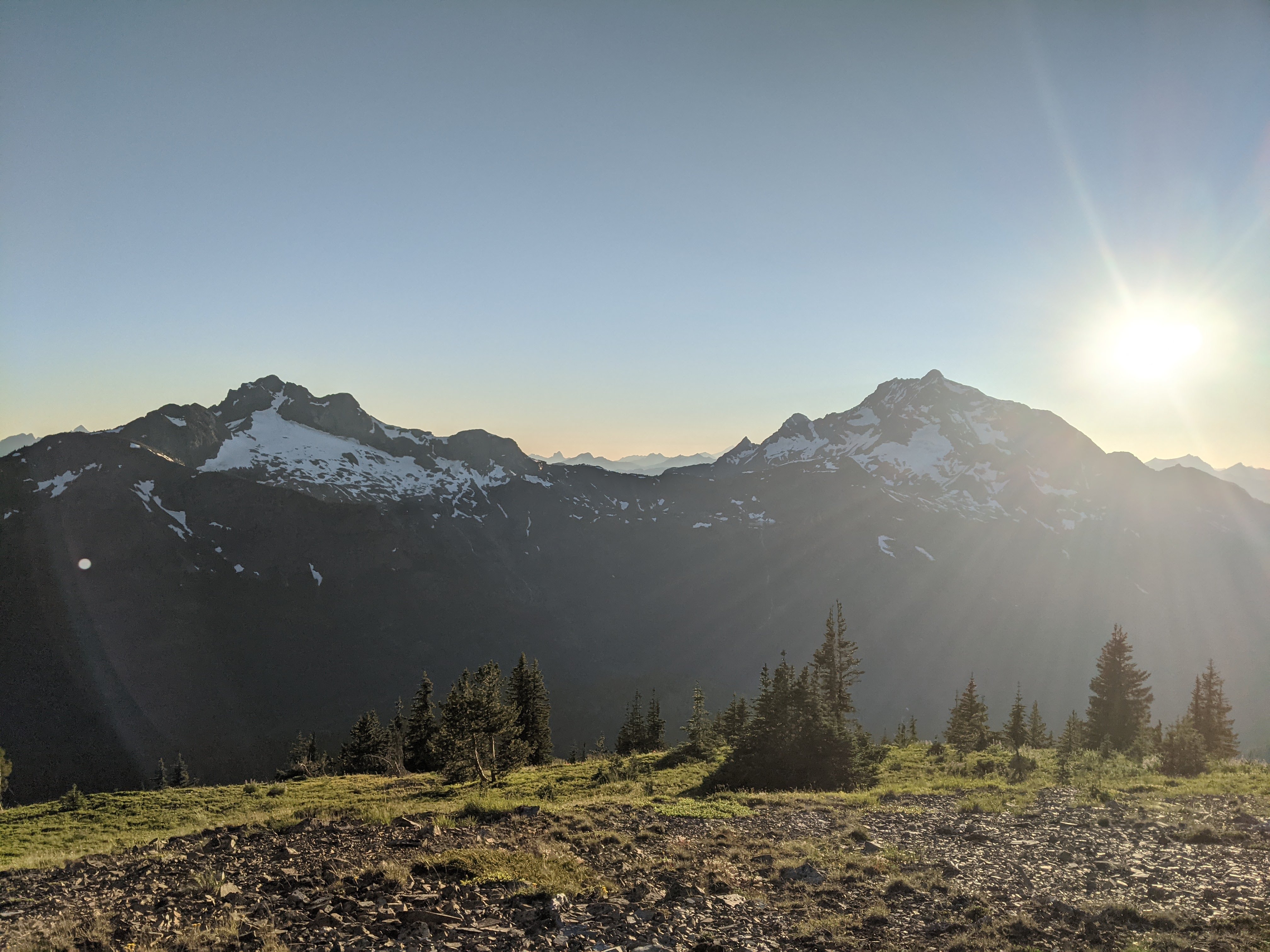 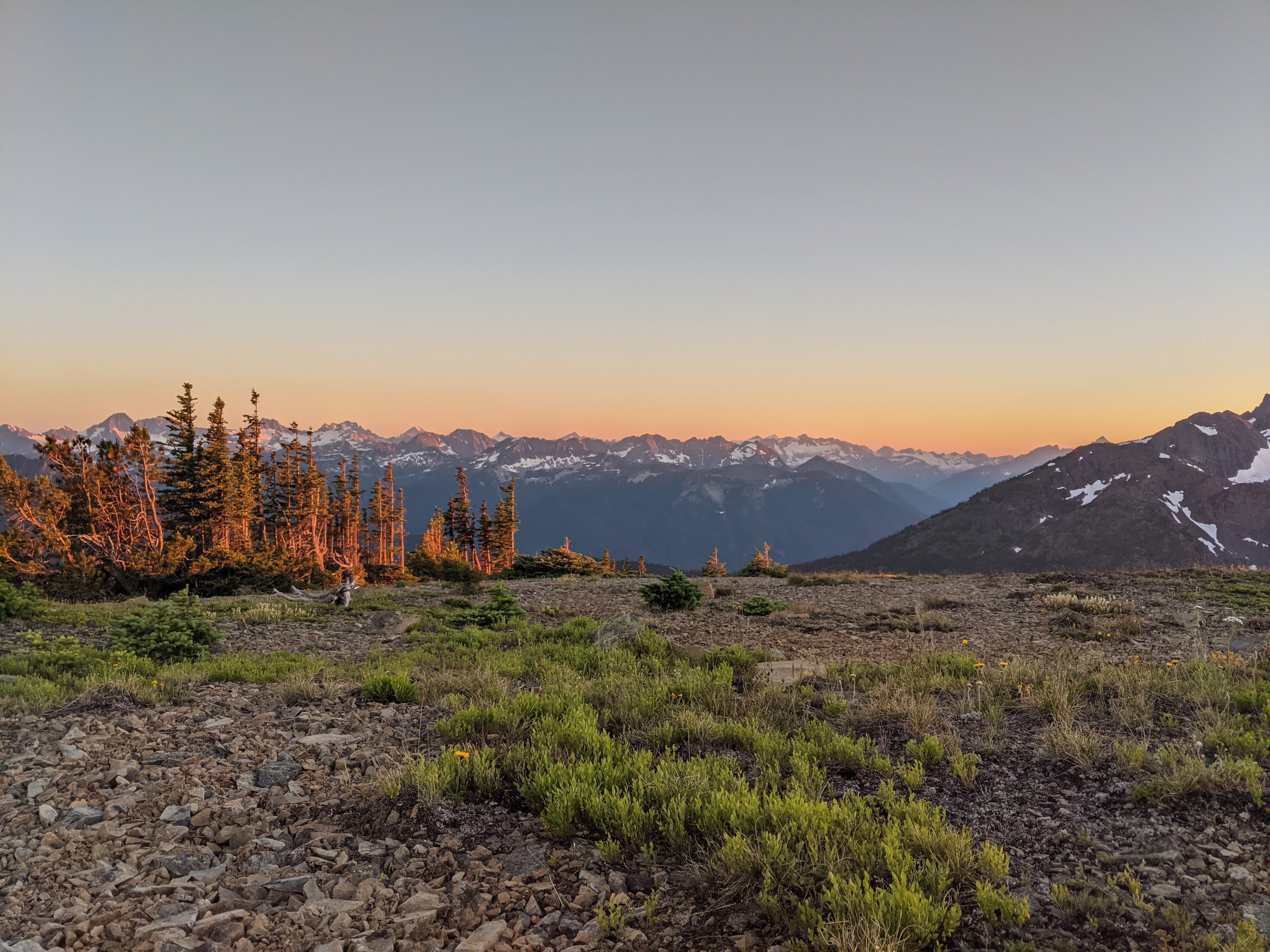 A look southeast from my camping spot during golden hour

The goal of my jaunt up to Jackita Ridge as opposed to staying at a lower camp – to catch the sunset from a great spot – was well worth it despite being witnessed entirely from within my tent. I woke up to the sunrise and alpenglow on Jack Mountain as I regrettably left and packed up. By around 7 am my small posse of mosquitos and I were back on the trail, making our way downhill along the western side of Jackita Ridge. There were gorgeous views of Crater Mountain and Jack Mountain, and the temperature was pleasantly cool since the sun had yet to peak the ridge. After about 1.5-2ish miles I found a nice creek flowing through an Idyllic meadow. I spent a good bit of time here soaking in the morning sunshine, filling up on water, and eating my breakfast.

The next part of the trial was probably the most beautiful yet – cool glacial rivers, colorful wildflowers, and towering glaciated peaks. The only drawback was how steep the trail was, whether it was going down or up, it was always steep. This is how the trail was for the first 40k or so of the 60k loop. Wildflower meadow and mountains (not sure which ones)

A large section of this trial was dry for the second half of this 15k day. I had expected to find water at Devil’s pass, about 6k from my camping spot, as it was mentioned there should be a couple of tarns that had water year-round. Unfortunately, either the tarns had dried up or I didn’t look hard enough, but I was unable to find water here so I had to ration a little bit for the remainder of the day. I was heating up some snow on the last small patch that hadn’t melted yet just before my camp spot for the night when a kind lady walked over to inform me of a fast-flowing stream less than a mile down the trail from where I would be camping.

I hiked a little bit further to the high point of this loop, and my campsite for my second night, which is on top of Devil’s Dome. set up my tent after a snack, then went down to fill up on water. By the time I got back the mosquitos were getting bad again despite not being much of a bother that day, it was also ridiculously hot because of the continued heat wave. Since today was one of my shorter days I had some time to kill which I regrettably had to spend lying down in my tent, sweating my ass off hoping for a measly breeze while listening to the mosquitos buzzing outside of my tent. I was mentally preparing myself for another night hiding in my tent, although thankfully, around 9ish, the mosquitos completely disappeared. 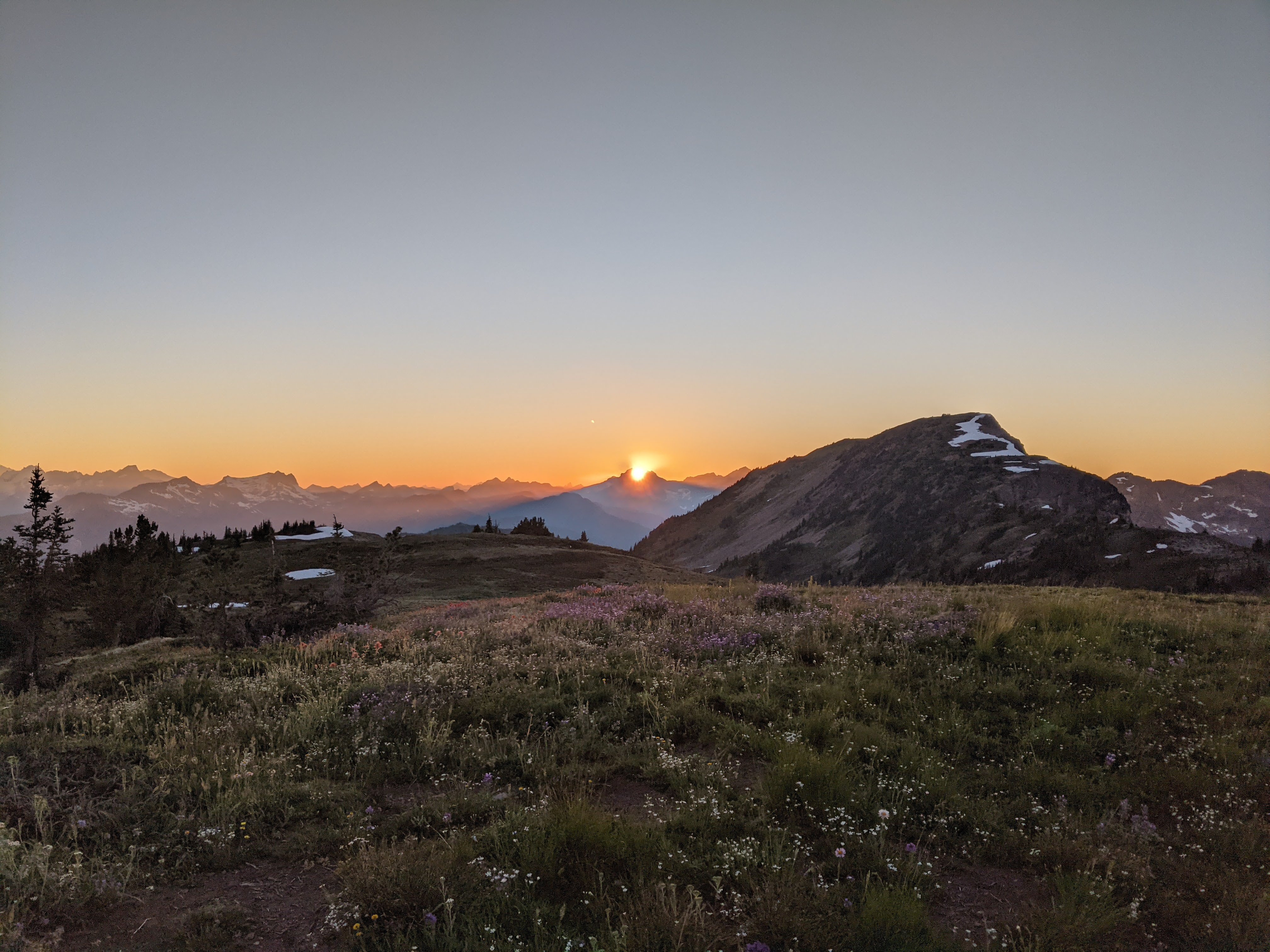 Sunset looking west taken right next to my tent

I decided to make a late second dinner and was appreciating the silence, stillness, and solitude while admiring the alluring dusky mountains. This is one of those moments that I know I won’t forget for some time.

I got up pretty early Sunday morning and decided to forgo my warm oatmeal for a cliff bar since I wanted to get moving quickly. The hike out was relatively uneventful. For the first 10k, the trail is entirely downhill where it descends about 1600 meters through some really brushy, overgrown trail covered in blowdowns. I reached the junction with the Ross lake trail at about 8:20, where I fueled up and got some sunscreen on. The remaining 20km is along a mostly flat and really well-maintained trail through the Ross Lake National Recreation area. There are some really pretty views of the lake, some trickling brooks to cross, and lots of big evergreen trees to admire. 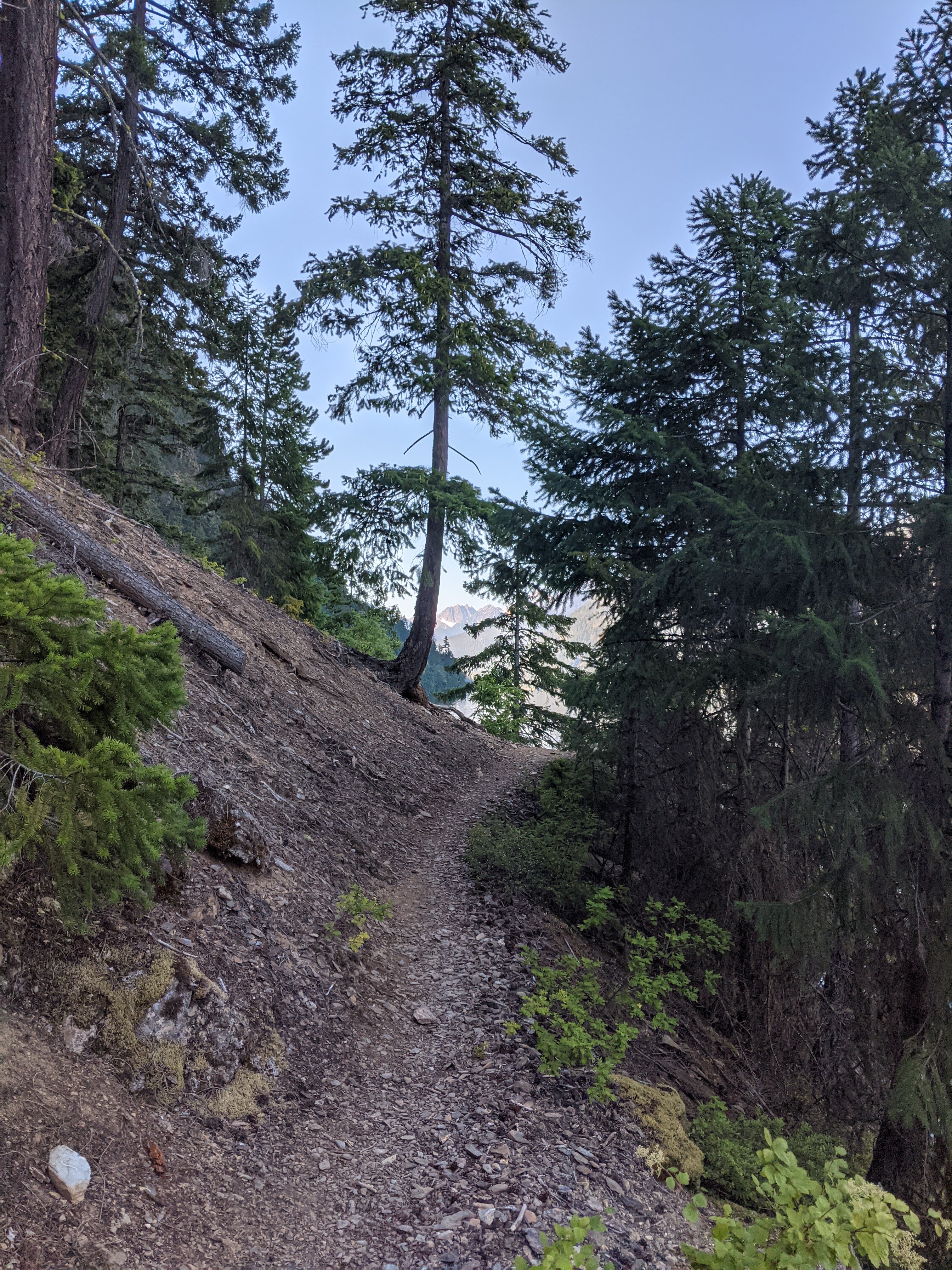 About 4.3km from the trailhead there is a 1k jaunt that heads down to Ross Lake, which I of course had to take. I went for a nice swim, sunbathed, and managed to finish my book before hiking the final few kilometers back to the trailhead where I started this trek a couple of days ago. 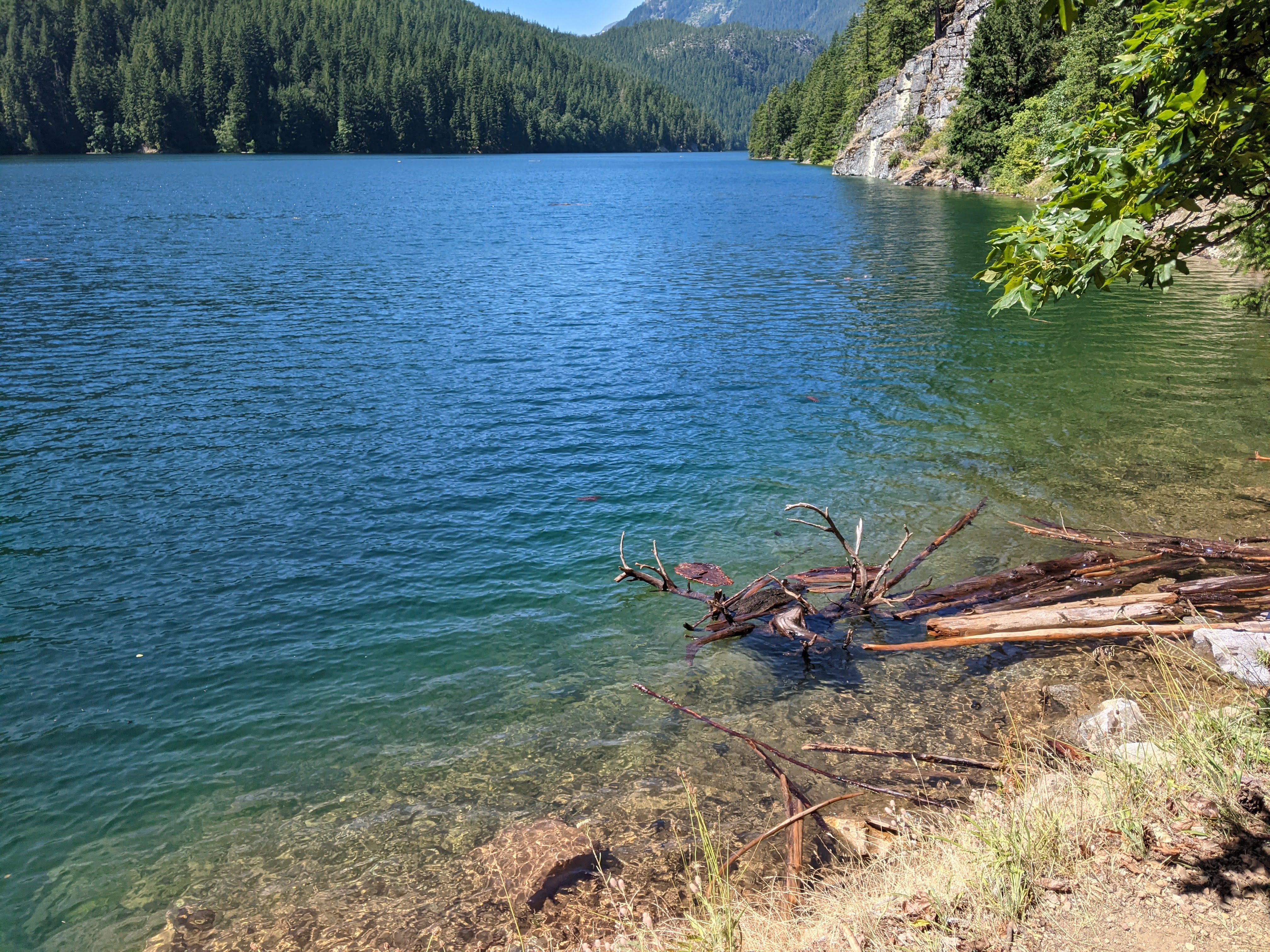 Somehow the past couple of times I’d been in Washington I’d managed to forget the obligatory Trader Joe’s pit stop. So, this time, in an attempt to wait out the border traffic I stocked up on Dark Chocolate Peanutbutter Cups at the TJ’s in Bellingham before driving the remaining way back to Vancouver.