Posted on September 28, 2022 by Anthony Carbone

It all started with 105 Hikes In and Around Southwestern British Columbia by Stephen Hui. I borrowed it from the library in a sleep deprived haze of procrastination.

And there it was. Hike #10: 4/5 quality, double black difficulty, 17 km round trip, AND accessible by bus – it was exactly what the doctor ordered for the weekend. None other than North Shore’s very own Crown Mountain.

Hui’s route suggestion resonated with me. Arrive at the bottom of Grouse by bus, take the B.C. Mountaineering Club (BCMC) Trail up to the Peak Chalet (instead of the crowded monotonous Grouse Grind), check out the happenings around Grouse (and the ski runs pre-snow), a pleasant trek along the Alpine Trail, a solid descent into Crown Pass, and a final ascent/scramble to summit Crown Mountain, returning much the same way.

Having arrived in Vancouver only a few weeks ago as an exchange student, I really liked the idea of this accessible yet challenging hike in the North Shore Mountains. In those few weeks I also came to love the VOC’s vibe, and decided to post a trip to see if anyone was interested in joining me.

This wasn’t actually my first trip I posted, the week prior I posted a hike to Slhanay and the Chief, which drummed up the interest of a staggering one person (shout out to Param Mody!) and a few of my non-VOC friends. I did learn though that it was super important to convey accessibility (promise a car) and get the post up early enough for people to join. Despite acting on these lessons this time around, I was still expecting only a few people to join in.

To my utter bewilderment, 27 people expressed a keen interest in joining! Some of these people I knew, most I didn’t. So blatantly ignoring the fact this hike was possibly blowing out of proportion, we settled the travel plans, and set the go time at 8:30am from the bottom of Grouse.

Living on-campus, I was joined by the fellow on-campus tribe at the bus stop at 5:50am, with nothing but Crown Mountain on our minds. 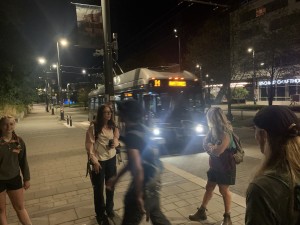 Our chariot arriving at 6:07am. 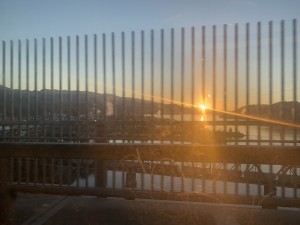 We were fortunate enough to witness sunrise upon crossing the Iron Workers Memorial Bridge.

We arrived at the base of Grouse Mountain shortly after 8am, so the caffeine-addicts got their daily fix at the Starbucks, while the rest of us made sure our water bottles were filled, and waited for the others to arrive.

Once the others arrived, I counted 17 people, not a bad turnout indeed. So we began our ascent a tad early at 8:25am from the trailhead gate and took our turn up the BCMC trail. The consistent significant incline made for sporadic water stops, though the group made good pace finishing the BCMC section by 9:40am (1hr 15 mins). 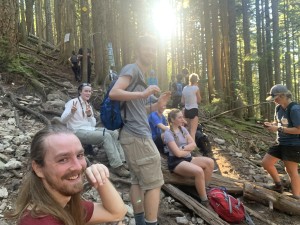 A few delightful sights greeted us, the Peak Chalet with it’s view of Vancouver, a 2010 Winter Olympic Torch, and another VOCer and local Annika Eng (who turned out to be our greatest asset as a guide, thanks Annika!) bringing our tribal count to 18. We went on to admire the Grizzly Bears for a solid while, and finally got back to business, heading towards the Alpine Trail around 10:30am. 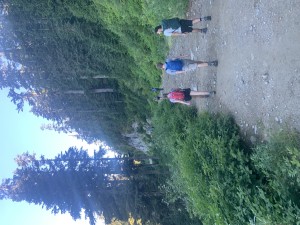 Leaving Grouse for the Alpine Trail.

Rather gentle wide paths soon gave way to tighter less gentle trails, and sooner or later we found ourselves descending in to Crown Pass. This descent was a slippery one, scrambling down muddy/rocky chutes, some aided by chains. It seemed like the rain two days prior had not dried out in the shade, but we managed just fine. Coral Choi making her way down like a boss.

Once finishing our descent, we were met sharply with the reminder that there was still a way to go, the ascent to Crown Mountain awaited. After a water break we ascended, encountering some scrambling in the boulder fields, being rewarded with ever-improving views of Vancouver. Halfway up Crown Mountain, with the views of Vancouver merely teasing us. 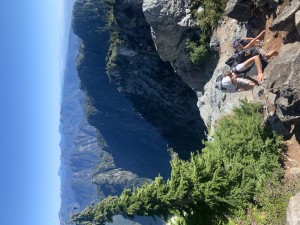 Reaching the ridge line of Crown Mountain – almost there.

A few more scrambles went by (and a little traffic jam with fellow members of the public) and we were there, Crown Mountain, just after 1:30pm. Luca Besso celebrating his win. And what a view to celebrate it with. 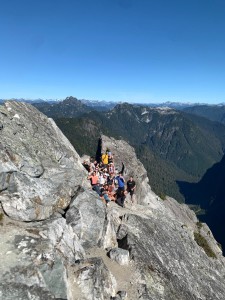 After lunch was had, view appreciated, and photos taken, we started our descent back in to Crown Pass, proceeded by the ascent up the muddy rocks (a bit easier after the mud dried in the heat). We took the Ridge Trail on the way back for something different, but it was largely the same as the Alpine Trail on the way in. 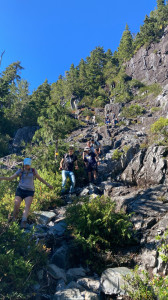 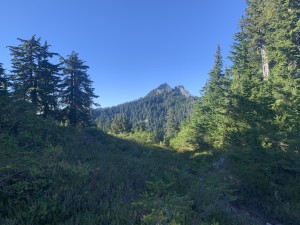 Now our friend, Crown Mountain, seen from the Ridge Trail.

Once we arrived back at the Peak Chalet atop Grouse Mountain, some people opted for the Gondola down, whilst some of us continued down the BCMC to finish off the day around 6pm.

But the day wasn’t over, for we were hanging out for a meal. So sights were set on the Local in Kits, and to the joy of the many new-to-Vancouver hikers that remained, we travelled via the SeaBus, a first for many of them. In our exhausted state, we were simply over the moon by this mode of transport, all remaining hikers honouring the vessel in their own special way. One going as far as assembling this moving Haiku:

Our hands caked with the Earth’s soil,

I need the SeaBus.

A meal and drink at the Local, and one last hoorah to our achievement concluded the night around 10pm.

Thanks to everyone that made it out and got around the energy. Loved every minute of it.

“You can always reinvent the Ferris Wheel.” – Max

“Pain is temporary, but so are memories.” – Johan

“I love chains and chains love me.” – Lucca

“I’m the judge and the defendant!” – Noah

“My legs are cramped.” – Mehdi

“The hike was good, but the SeaBus was better.” – Ayva