The Harrison Hut is hard to work on for a variety of reasons: the grizzlies, geological instability, logging, locked gates, and mostly, a lot of regulations. No doubt the regulators will tell us that their regulations have been very wise, as nobody has been killed by grizzlies, geological instability, or loggers, or at least if they were, nobody told me. We are allowed to do two trips per year to maintain the trail and the hut, as long as we don’t actually have any fun. Meager hot springs would be fun, so don’t even think of going there.

There was a lot of pent-up demand for this trip and Haley, our trip organizer, did a lot of work, including driving to Squamish early to get the keys to the gates. The permits (all five pages) said that we were allowed only four cars, and somehow Haley decided that meant 12 people. We had a lot of work to do so we wanted tough keen people and I knew I wasn’t tough so I was not among The Chosen. Then she expanded the trip to 16 people, and still I was not among The Chosen. So I decided I didn’t really want to go, anyway. Then she expanded the trip to four carloads of 5 people each, and suddenly I was among The Chosen. I got to ride in the VIP car with the President, the Past President (Haley), the Treasurer, and our driver was the legendary Jeff Mottershed.

The Work: We had about 6 kms of trail to maintain, but Jeff had already been up there previously with his chain saw and had removed trees across the trail. The trail marker team was to adjust trail markers so we could see them, so they weren’t on dead trees lying on the ground, and so on. They did a brilliant job and managed to totally destroy a hammer. Others of the trail crew were out there trimming blueberry bushes and the occasional devil’s club. When we got up to the hut a bunch of marmot-proofers stacked a great many rocks around the hut to keep the marmots from eating through the plywood floor. People kept asking if we had accidentally trapped the marmots in the “basement” but we knew they were in their summer residence, not in the basement. Sunday morning Jeff assembled the multitude and explained solemnly how we had to move the outhouse, we weren’t to fall into the poop in the old outhouse hole, how marmots like to eat poop and urine-soaked plywood so we were to do an exceptional job of marmot-proofing the outhouse. This was done. We didn’t need to cut firewood because Jeff had already done that on a previous trip. A lot of “spring cleaning” got done, like hauling down half full cans of paint, a residential grade door, and other construction debris. Finally we got to the crux move of the trip. Jeff had built a bridge across Barr Creek, and the next year he had reinforced it, but it had been wiped out by snow load or maybe a bear crossing it. There was a sign warning people to not overload the bridge but bears don’t read signs. Jeff’s #3 bridge is steel and is so heavy it took two helicopter flights to install it. The crux move was to remove the old bridge. How do you cut up an old aluminum bridge? With Jeff’s chainsaw, producing lovely aluminum sawdust. The crew was competing for the privilege of carrying down pieces of bridge, and the assorted junk made a nice addition to Jeff’s vehicle. 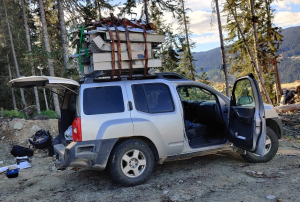 The crew was very keen and worked very hard, but what did I accomplish? Not much. I polished the brass plaque which said that the hut is a memorial to Julian Harrison. I found a piece of string to hold the door open, so that the sun would shine into the hut. I tested the solar light. I demonstrated the Coleman white gas stove still works OK. Two years ago the club was replacing the white gas stoves with propane stoves, but now it seems they are going back to white gas. I tested the new outhouse hole. While going up the steep trail near the hut I asked myself why I keep doing this stuff, because three years ago I decided I was just going to do hot springs, car camping, and eating pumpkin pie. But the hut looked so beautiful in the light of the full moon that to me it made the whole trip worth while. 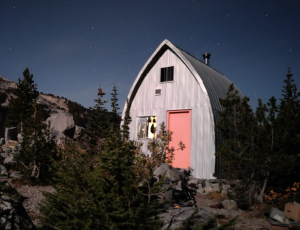 Besides, the best trip of my life was to the Harrison Hut.  You can read all about it at