A Rip Up To Phelix

I attempted to jot down a few notes during the last night at Phelix, the are as follows…
-furst dday, early am at breka
-we did not run with axes pr chainsaws during this trip
-the community of voc…

Now I can’t quite remember what the ominous dot-dot-dot was supposed to mean, but I do think the key take away front notes (unfortunately comparable to anything I attempt to transcribe from my Archaeology class) is that I was tired, really freakin tired.

During the Pre-Trip AJ had asked who would be interested in going up on Friday, she didn’t have class, co-lead Joe didn’t either, Tristan was game. Being a mature and responsible student, I weighed stoke versus importance of attending classes. On Friday I sat in the dark outside of Ritz, waiting for the grey Subaru to whisk me off for what was to be my first real VOC outing.

Side note- Is VOC said V-O-C or voc (Rhymes with rock)? Secondly is this a super Jerry question??

We chatted our way through to Pemberton where we were to meet someone providing us with a second chainsaw, and from there up the FSR. Rush blaring from the bluetooth speaker AJ navigated a road that reminded me of a first years complexion. We were prepared to deal with a landslide a few turns up the way, we did this in record time by driving over a few small non consequential rocks and onto the trailhead.

After a short hike in we reached the lake, and I’d like to think it was the beauty and not my less than ideal lung capacity that left me breathless. Phelix is home to some seriously gorgeous terrain 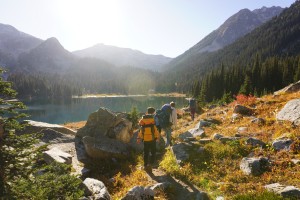 With quick deliberation we set about getting the list done, if we got more done, we’d have time to for a scramble before the second group arrived. With that common goal in mind, we took turns putting screws in wood, and answered the age old question “How many VOCers does it take to fix a toilet seat?” The answer’s 4. Joe and AJ called in seniority and set about having a good time chopping wood, as Tristan and I checked the state of the wood pile at the far side of the lake. We got our first bit of practice on the action that would define the next day, shlepping wood. 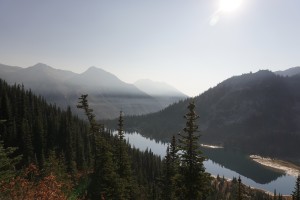 South-East through the valley (Alex Beauchemin)

As we sat and ate dinners that consisted largely of mac and cheese, the plan for the next day to climb Shadowfax was concocted. and we went to bed excited for the adventure to come.

We left around 0715, mostly due to my last minute bathroom break, and as I met with the group standing and waiting in the dewy air, I realized AJ has a drill sergeant like quality when it comes to timings, so the TP and hand sani stayed in the pocket as we threw ourselves through the bushes to the border of the alpine. 30 minutes, we’d reached the boulder field and in another 30 minutes we’d summited, the three execs set themselves perched snacking happily. Karma had brought a pause to my climbing year, as I slipped and trimmed a few millimeters of skin from the finger tips of my right hand. So I taped up and on our respective rock mattresses, we napped, and to be totally honest, sitting half asleep on a mountain named for Gandalf’s horse with good people was one of my happiest moments.

As we packed up AJ so kindly suggested I write the Trip Report; being a first year with high stoke, and the eyes of a sizeable portion of the exec team on me, I stammered yes, so ultimately you have her to thank for this rambling anecdote. We set down, they jumped in the lake; myself having a frankly pathetic aversion to cold water, watched. We chopped wood, as the first group arrived, after some delay the second did, the third would come some hours later, a faulty alarm, and a tired student, fair enough for being a little late. 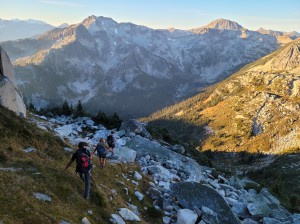 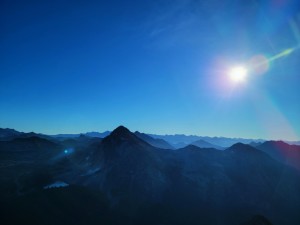 East, the hints of smoke creeping through the mountains

With the crew all together we carried wood, bonded, listened to “Out for a Rip,” and had axe handling classes courtesy of Laura. Bonding became the main priority as the evening went on and the hole for wood started to grow claustrophobic. We bonded over mountains (Who’d have guessed, the outdoors club likes the outdoors), those bonds were quickly broken as we ranked desserts (Chocolate Cake – The best, and an easy classic). And not satiated with my alpine nap, I snuck off early, and can only imagine the chaos that continued. 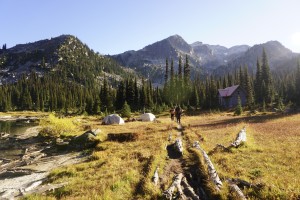 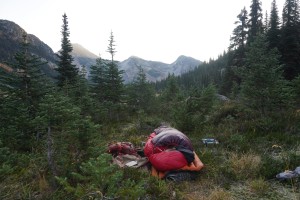 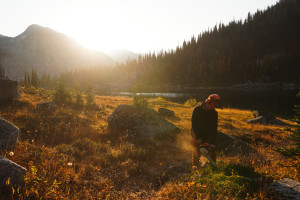 The next morning we woke up, schlepped and stacked until the whole hole was full (Say that five times fast) To celebrate, with an AJ timing half the crew bolted up to the Alpine lake they’d swam in the day before, I led the rest of us at a more relaxed pace for a quick dip and look around. Before we made it back to the hut for 12 and a steady down hike. 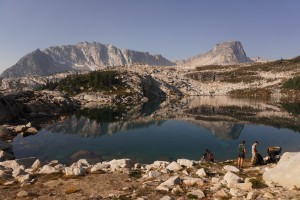 With images of burgers and beer (primarily the latter) we arrived at the cars, cleaned up the saws, and headed off, except for Kiera, whose suv dubbed Velma, had acquired a flat, no matter, VOCers are competent folk and on her donut, we all made it down safely!

Ultimately the Hike Worked, and the Work Hiked. See ya in the Winter Phelix
-Noah Wyse

4 Responses to A Rip Up To Phelix