A Winning Hand in Desert Solitaire

I noticed that there haven’t been many trip reports posted lately, and I felt like writing a bit so here’s something. Sorry it’s not relevant to B.C. but hopefully I can send some warm vibes to people for whom t-shirt weather is a distant memory…

I spent a good part of the last day of 2022 lost in the desert outside of Tucson, Arizona. Maybe that’s not the most accurate phrasing, as I knew exactly where I was in terms of navigation and never strayed far from the road. But there are other ways to be lost. 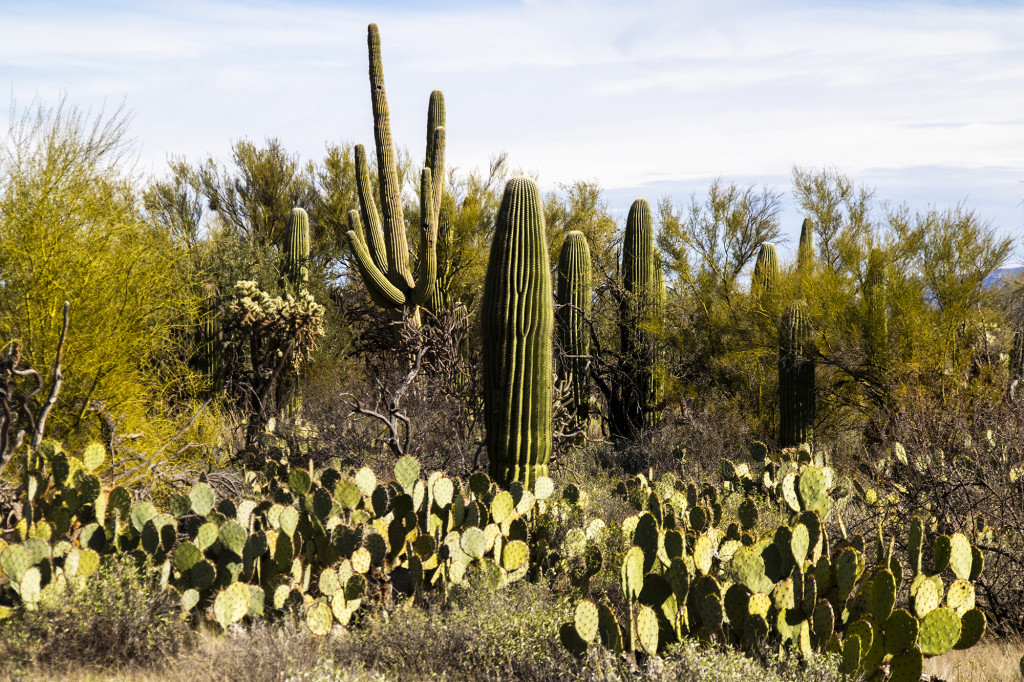 With mostly sunny skies and temperatures in the low 20s (70ish degrees in Freedom Units) I set out into the Sonoran Desert in search of a freak of nature. To be less dramatic, I was basically looking for a weird cactus. The basins and hillsides stretching from Tucson to Phoenix are covered in saguaro cacti, which despite being a very cool and protected species are not rare in the least. However, every once in a great while – said to be one in a million odds – something goes wrong when a saguaro grows up. Instead of continuing to grow in the classic radiating symmetrical pattern, as depicted in various westerns and Looney Tunes, the rare saguaro will start to get real weird with it. These mutants take on a wave-like, deformed appearance, and are known as cristate, or crested, saguaro. No one can say for sure why this happens, but explanations range from genetics to lightning strikes to hard freezes. What can be said for sure is that these are a real treat to encounter in the wild, at least for certain botany dorks. 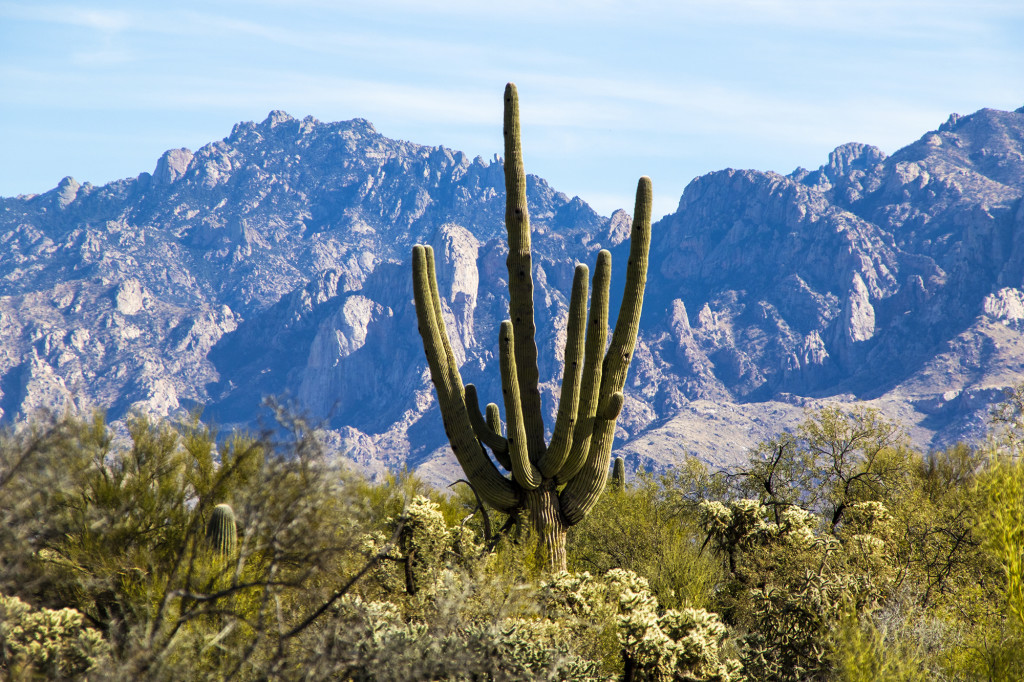 This is what a normal saguaro cactus generally looks like.

I mistakenly went into this adventure thinking it would be an easy success to close out the year. A year ago a friend had posted about this mutant on facebook and I had acquired some beta from him, including coordinates. There was a bit of a discrepancy though. He described it as being only a hundred yards or so out the back parking lot of a random church, yet the GPS location put it about a mile away in a blank patch of desert. I knew he was out climbing in Joshua Tree that day, thus an immediate clarification wasn’t forthcoming. How hard could it be to find one cactus in a million with such a distinctive look? I decided to start with the coordinates as my buddy’s waypoints are usually pretty reliable. Nope. 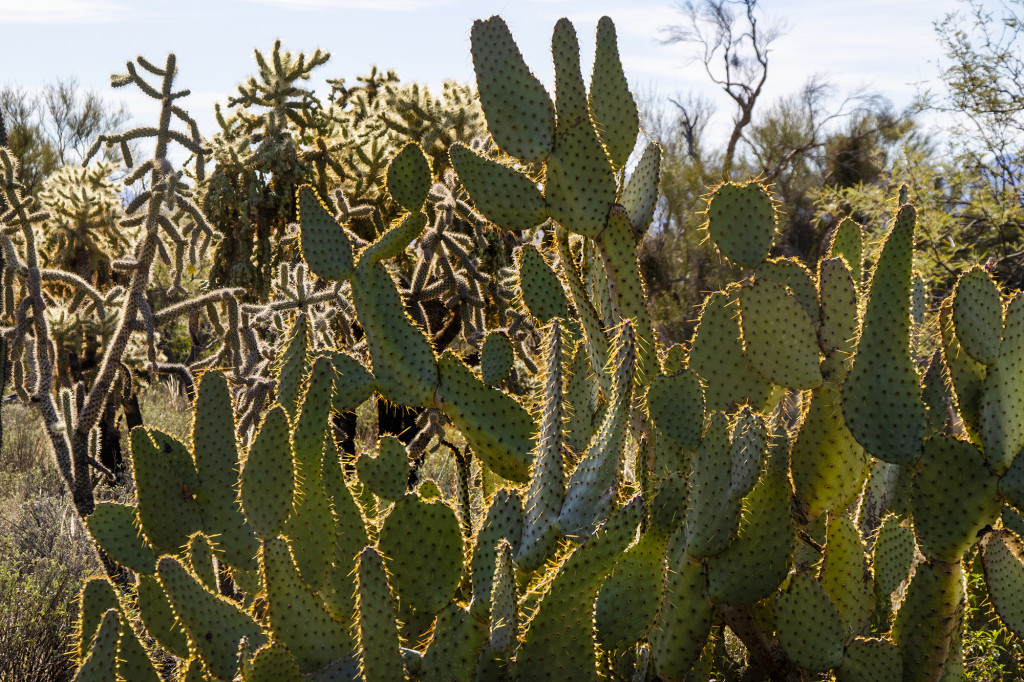 Some beautiful lighting behind a magnificent prickly pear cactus 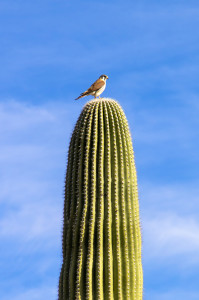 At least the bushwacking through the desert was lovely to start. Usually when people think of the desert they envision a barren wasteland, but the Sonoran Desert shatters that stereotype. This place is alive and thriving, with the pastel greens of the cacti mixing with the yellows of the grasses and blue skies, where roadrunners, coyotes, javelina, snakes, lizards, and wildcats pass through silently. I passed through as well, only stopping to remove the occasional cholla cactus spines from my ankles. In the distance, suddenly, I saw the classic crest of a mutant saguaro. Excited, I carefully navigated my way toward it before realizing this was not the cactus I was looking for. Maybe these are more common then one in a million after all, and few people care enough to get an accurate census. Anyway, I had searched all around the coordinates and only found a different and somewhat less exciting crested saguaro. At this point I realized this would not be the simple 15 minute excursion I had envisioned. 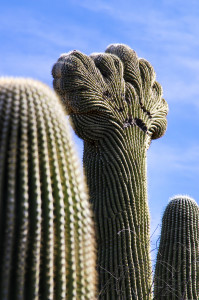 There was one crested saguaro, but not the one I sought

No worries – I’m leaving all of those behind in 2022. This had become a more intriguing challenge, looking for the needle in the haystack on just a vague clue and bad coordinates. I pushed on further into the open desert, following dry washes and the occasional dirt road. The new plan was to scan the space between the coordinates and the church. Between the way out and back I could get at least two different search transects, and presumably this thing would be tall enough to be seen at a distance. However, it was nowhere to be found. My appreciation of just being out in the desert slowly started to turn to impatience. I briefly encountered a group of people at a distance, but with their dog aggressively barking they turned around before I could ask if they had seen any oddly-behaving cacti lately. Things got a bit more promising when I met a horse-riding woman and her daughter. She seemed to know what I was talking about, but told me I was going in the wrong direction. Apparently the cactus was back where I had been, increasing the odds that the coordinates were actually correct and I had just missed it. She noted that the one she was thinking of was well hidden by an ironwood tree and that she would be in that area soon if I needed further help looking. So I set out back to that location, following a different search path just in case. Surprisingly I did run into her again, but it quickly became clear that she was only referring to the one I had already found. So despite the help I was now back at square one.

I had parked off the road to get closer to the coordinates, but now it looked like I needed to get to this church. As I approached the car I heard a rustling in the bush nearby, and saw a brownish blur. At first I assumed it was just a coyote, but then I noticed a pair of tufted ears and a catlike face staring at me. This was a bobcat! Seemingly wary of me, it moved away quickly while I of course attempted to get a good photo while wondering if my last act of the year (or ever) would be getting in a fight with a wildcat, ironically the mascot of my original alma mater. After this encounter I quickly returned to the vehicle and restarted the search out of the church parking lot. This proved fruitless with such a vague description, along with the worry about wandering around into potentially private property in a rural part of a gun-friendly state. This whole thing had now gone on for hours longer than anticipated and I had another hike I wanted to do, along with some partying later that night. For all I knew, the thing could have died within the last year and I was searching for a ghost in the arid wilderness. 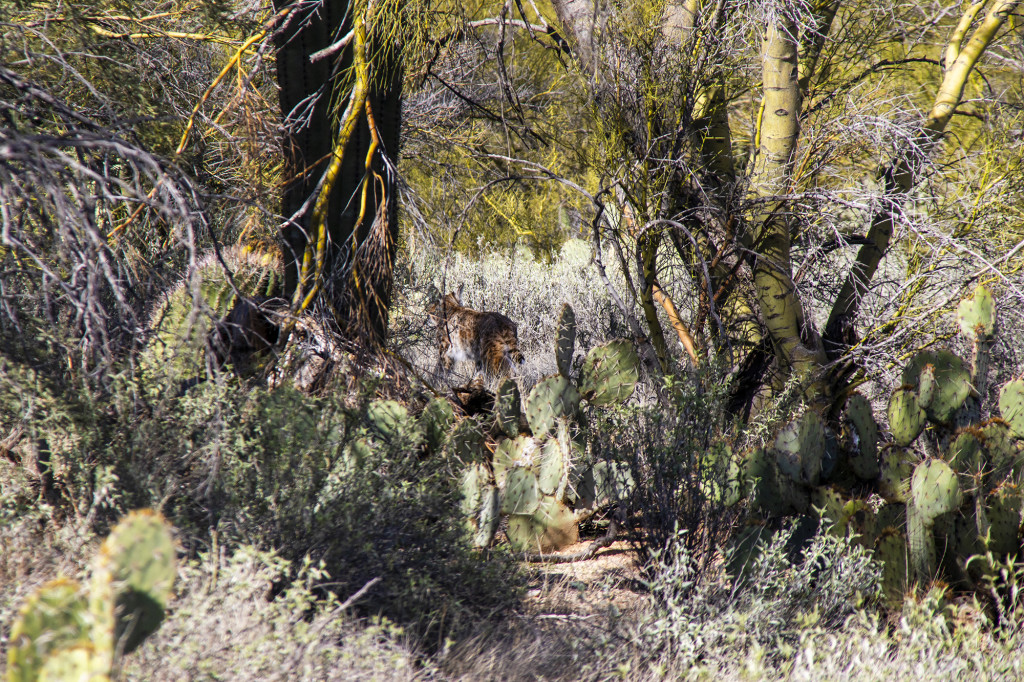 Can you find the cat?

At that point I bailed and hiked up to Wasson Peak, the highest point in the Tucson Mountains, to catch the last sunset of the year. But that damn cactus was still on my mind, even as later on we drunkenly set off fireworks imported by some random dude from Tennessee and welcomed the new year.

Looking south from Wasson Peak in the Tucson Mountains 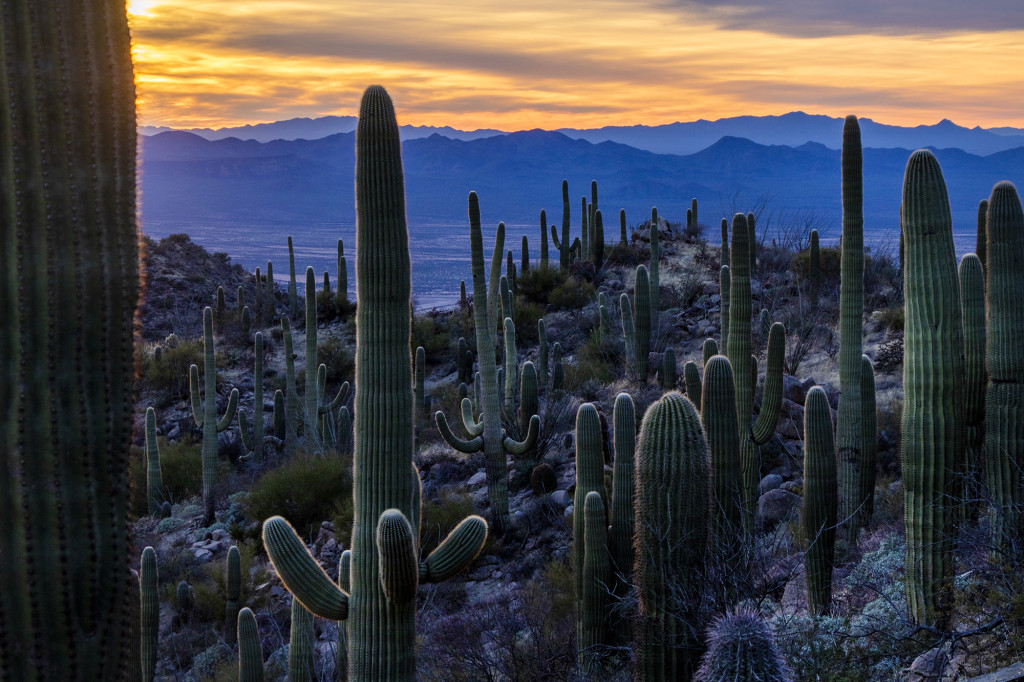 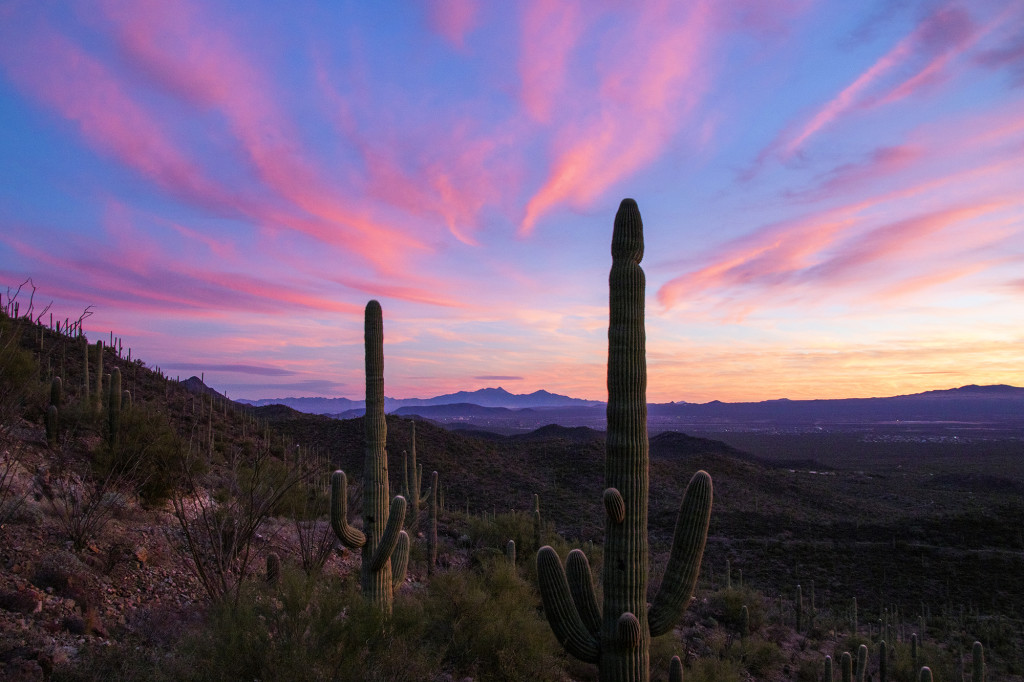 The last sunset of the year was pretty good

After some New Year’s Day wandering around in the rain in Tucson, as well as a long hangover nap, I gave it a halfhearted second attempt. However, upon arriving at the church lot I noticed a truck circling suspiciously. Could this be some sort of security about to tell me to stop being weird in the desert? They drove around the church a couple of times, and hesitated as they drove by my car – almost as if they were about to get out and say something. I didn’t like the vibes at all, so called the search off. This was a good thing, as soon the sky opened up into a full hail storm. It also gave me time to get a response from my friend later that night. He sent a screenshot of the map location as recorded by his phone, which was decidedly different from the coordinates that were provided. I was a little peeved, especially as he had earlier bailed on climbing with me on this trip, but I needed all the help I could get. 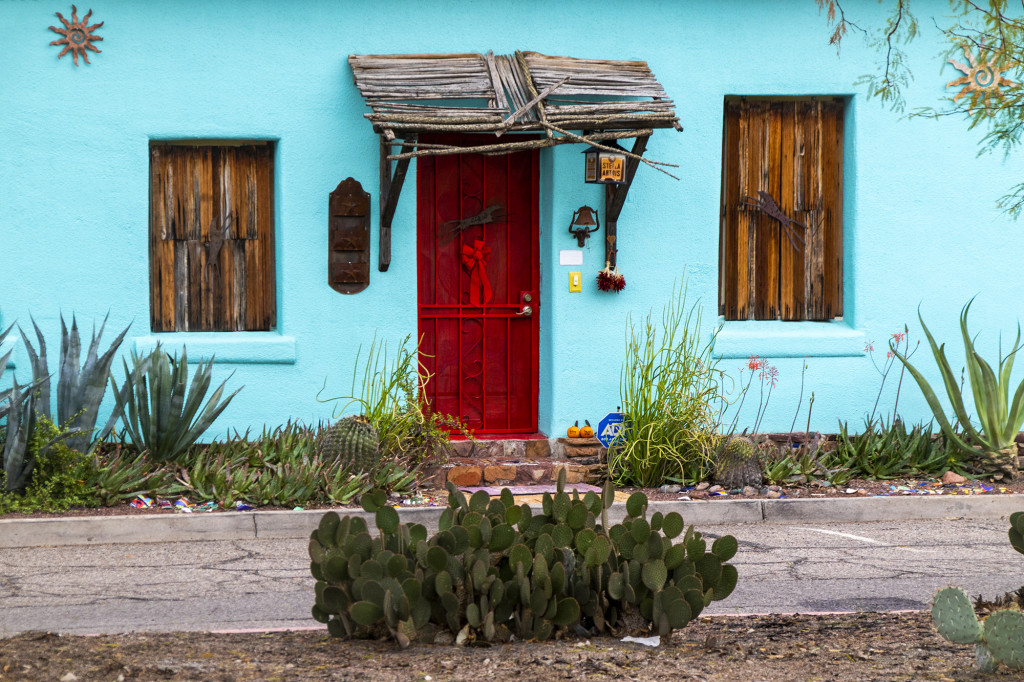 Armed with this new beta, I gave it one more try in the morning before driving out of Arizona. With overcast skies and a background of mist-covered peaks, I finally spied this very special saguaro in the distance. It was literally a five minute walk from the parking lot of course, just in the opposite direction I had searched. But here it was. One in a million. 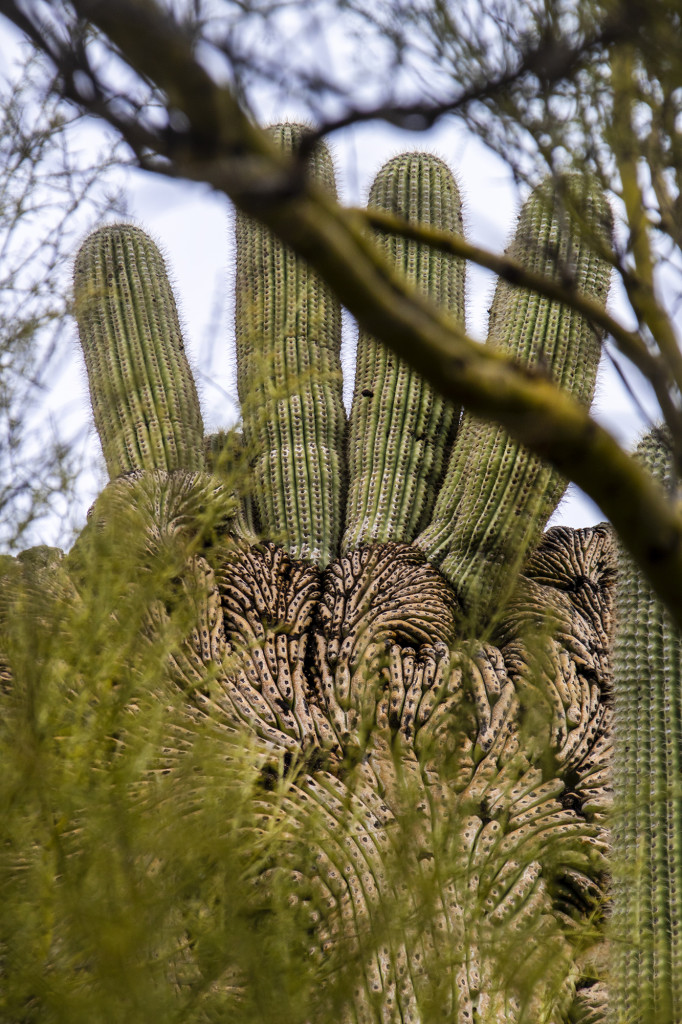 Of the half dozen or so crested saguaros I’ve encountered, this one is by far the most spectacular. Most of the time the mutated crest sits at the very top (hence the name), but this particular cactus has normal arms popping out above and reaching to the sky. Like it wanted to be weird but in a very aesthetically pleasing way. The texture of the curving cristate meeting the normal saguaro appendages was super fun to photograph, though I think my friends captured it better last year. More than anything I’m grateful to be one of a very few to encounter this wonderful freak of nature living in the outskirts of Tucson. 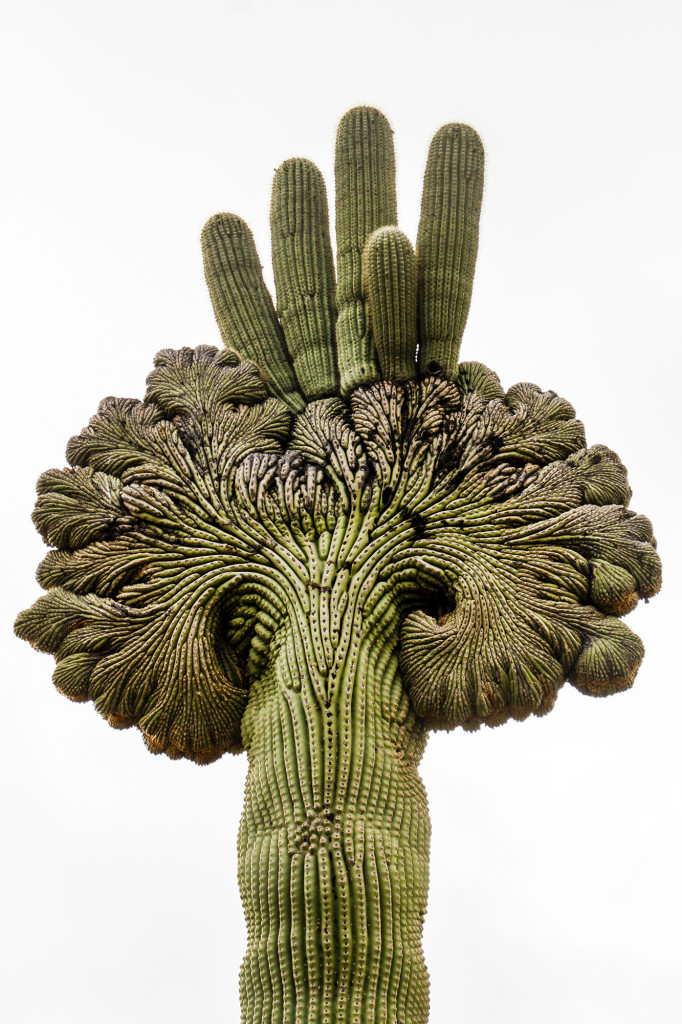 So, was there a point to this search, or to writing up this meandering narrative? Frankly, no. Sometimes it’s just fun to get caught up in a quest for something few people have even heard of or care about. But maybe this is about the journey being just as important as the destination, or something cliche like that. Maybe it’s about noticing beauty in nonconformity. Or finding help, even if misguided, in unlikely places. Or possibly even about how tenacity and a not small amount of stubbornness can be just as important as actually knowing what you’re doing. Perhaps sometimes you search for something far and wide only to find it was right there in front of you the whole time, if you’d only known where, and how, to look.

Nah, it’s just fun to do dumb stuff in the desert. 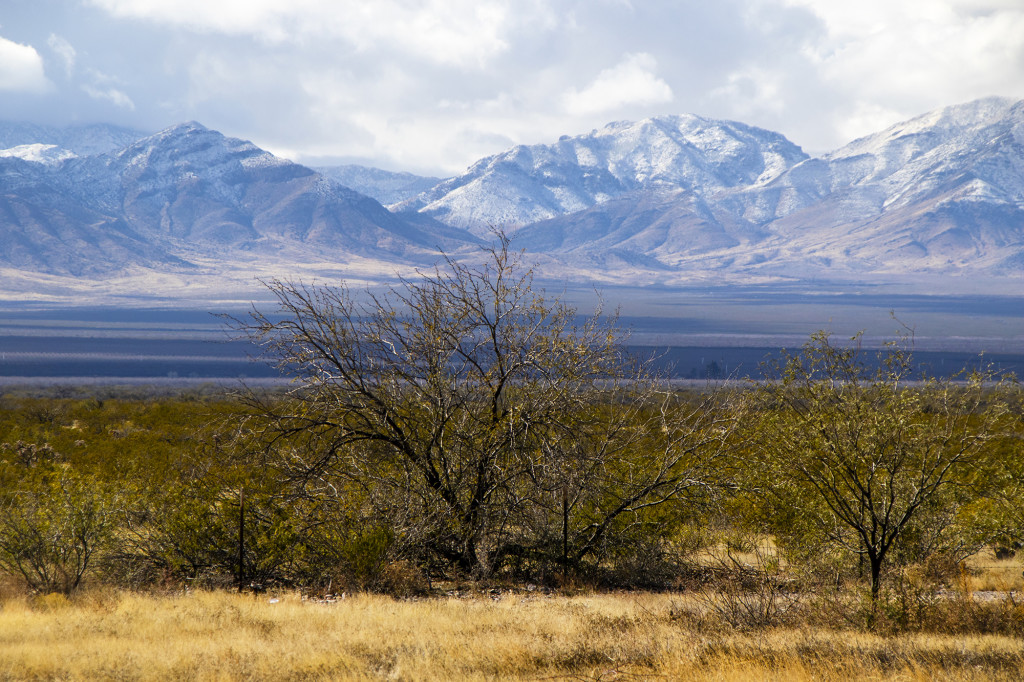 Bonus pic: rare snow in the desert on my drive out of Arizona

P.S. Happy New Year to everyone reading this! Hope to see you on many adventures in the future.

4 Responses to A Winning Hand in Desert Solitaire