A visit with the Judge

By Vincent Hanlon and Birgit Rogalla

Mt. Judge Howay is quite the presence—a double summit that can be seen throughout the North Shore mountains, which people talk about with a combination of foreboding and admiration. Given the lovely, droughty fall, we went to the N end of Stave Lake on the first weekend of October for a visit.

We decided to take the more romantic route to meet the Judge—bikes and a canoe, rather than the bushwhack and extra long logging road slog recently described in a Facebook post. So we borrowed the VOC canoe and loaded it with two bikes, crampons, rope, a small rack, etc. etc. at the Stave Lake Dirt Church early on Friday morning, then paddled up the lake. The view was very nice—the 1600 m wall that is the N face of Robie Reid is especially impressive—but 3 hours of canoeing on a big lake at the start of a long trip is a mental challenge and Birgit soon declared canoeing wasn’t for her. Vincent was suspicious that this meant the canoeing was, by default, for him, but those sorts of allegations are best kept to oneself. At the N end of the lake we could have landed at a ramp on the E side, before the drowned forest, but we decided to cut down some logging road distance and canoe farther up the delta to an old causeway through green meadows dotted with old stumps. Because water levels were so low, it was difficult to find the correct route through the delta and we ended up wading through the water, dragging the canoe up over some dams of branches and logs.

We were looking forward to the next bit, which was to be the gentlest part of the trip — biking through the valley greenery to the river ford. A few minutes of bliss(ful ignorance) were followed by three flat tires between the two of us… We used our one spare tube but then were disappointed to discover that the glue in the patch kit was all dried out, so we stashed our bikes and marched up the logging road on foot. This was the prettiest area of the trip—the Stave River and its tributaries are lovely, and the cliffy valley sides are very impressive. This trip is usually done in September to allow for low enough water to cross the river. After a few attempts into deeper pools (Birgit would have had to swim), we crossed the river thigh deep (for Vincent) from a gravel bar covered in elk poo and cougar(?) tracks. On the other side, we walked downstream along the riverbank for a few minutes and then picked up the excellent flagged route that (we think) a VOCer put in five or ten years ago. 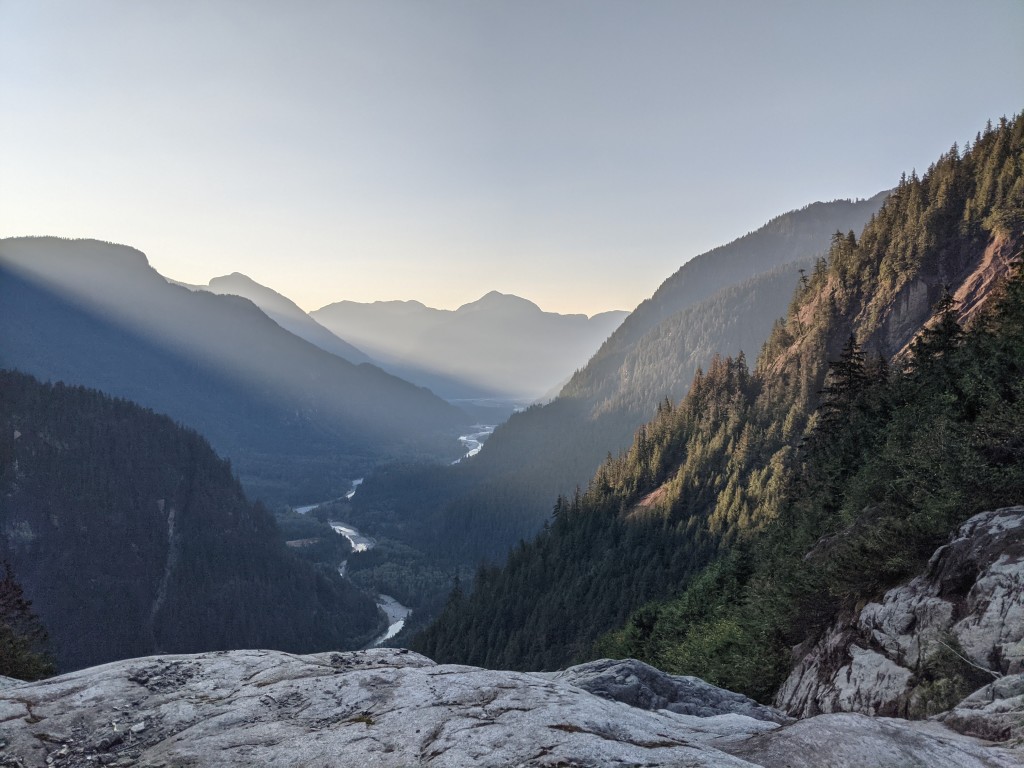 The bushwhack to the alpine on Judge Howay is mostly not too bad. Once you leave the river shrubberies, the open old growth down low is easy travel. Higher up, there are some steep and even exposed sections in the forest, but the bush doesn’t really intensify until the “water platform”, which is a slabby creekbed above a waterfall with a nice view of the valley. Past the water platform, thicker bush, avalanche-destroyed forest, and some short sections of truly awful alder/maple/blueberry/copperbush slide path took more time than expected until we broke into the “alpine” at 750 m or so (3 hours from the river). Some reports call this the hanging valley, because the mountain is called the Judge, but really it’s more of an avalanche path than a valley. Avalanches and rockfall have scoured away any vegetation, which is why treeline is so low. It’s also fairly steep, so it was not all that easy to find a campsite. Short autumn days meant that it was already dusk when we arrived after 9ish hours of travel, but in the end we found a flat boulder to sleep on, just big enough for two.

The next day we made for the summit. It’s a 1500 m slog through lots of gross loose rock, and to be honest the valley is kind of ugly. There’s nowhere you would say to yourself, “gee I’d really like to spend more time here!” Near the bottom there are routefinding difficulties getting through an exposed band of slabby cliffs, which we navigated as per old trip reports by scrambling up some wet slabs on climbers’ left, followed by more wet and/or gravelly slabs. Then there’s a long section of simple uphill slogging, which is alright, until the route turns rightwards into a gully choked with horrendous loose boulders and a few sad snow patches. This was quite unpleasant, especially where it was steeper, because it was far too easy to send person-crushing boulders down. The slabs low down and the top of gully are both difficult scrambling with exposure, and although we didn’t use a rope it was obvious why it might be a good idea.

Nearer the summit we put on crampons and kicked steps up a snowpatch (sad glacier?) to the high col at ~2200 m just N of the summit (at 2262 m). Unfortunately, the step across to the last rock scramble before the summit was blocked by a large moat. We built a T slot and Birgit belayed Vincent over to have a look at it, but there was no way to step onto the rock from the snow. Lowering into the moat and then climbing out wasn’t an option because the rock lower in the moat was steep, wet, relatively featureless slab that neither of us could have climbed. One option we considered was to hang in the moat as high up as possible and then pendulum back and forth to hopefully grab onto the rock, but given the angles it wasn’t clear whether we’d pop out of the moat and pendulum across the steep snow, which would mean loading the T slot in an unexpected direction, which would be very bad. So we admired the view from the col, turned around, and scrambled back to camp (10.5 hours). 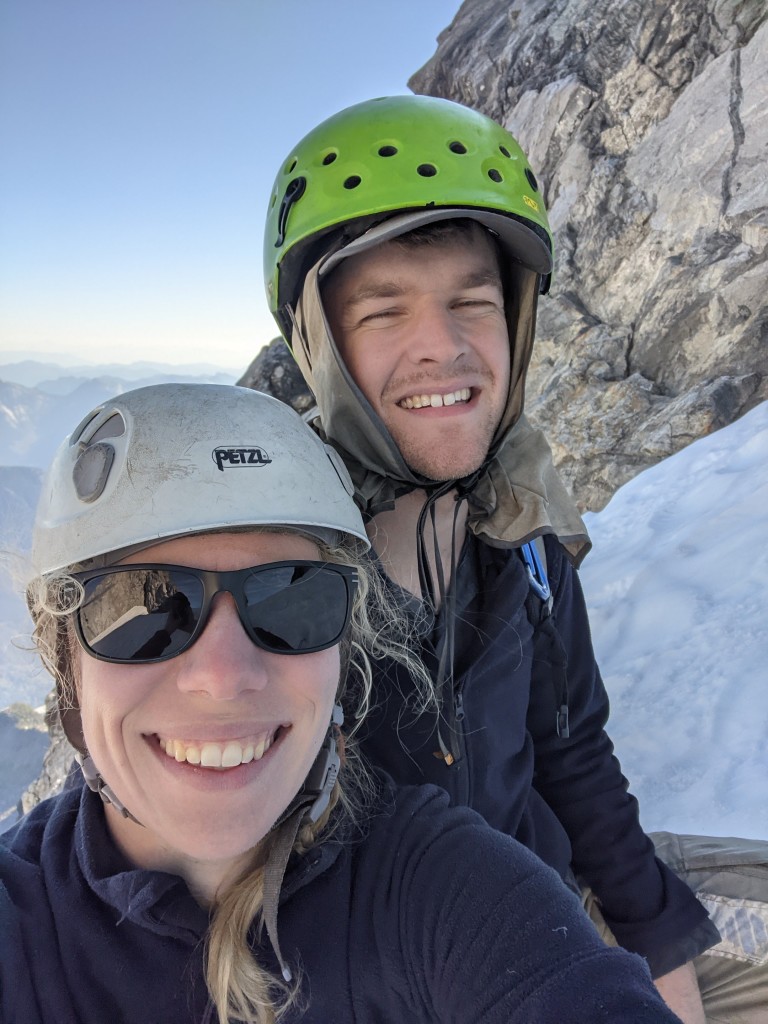 No regrets turning around. PC Birgit 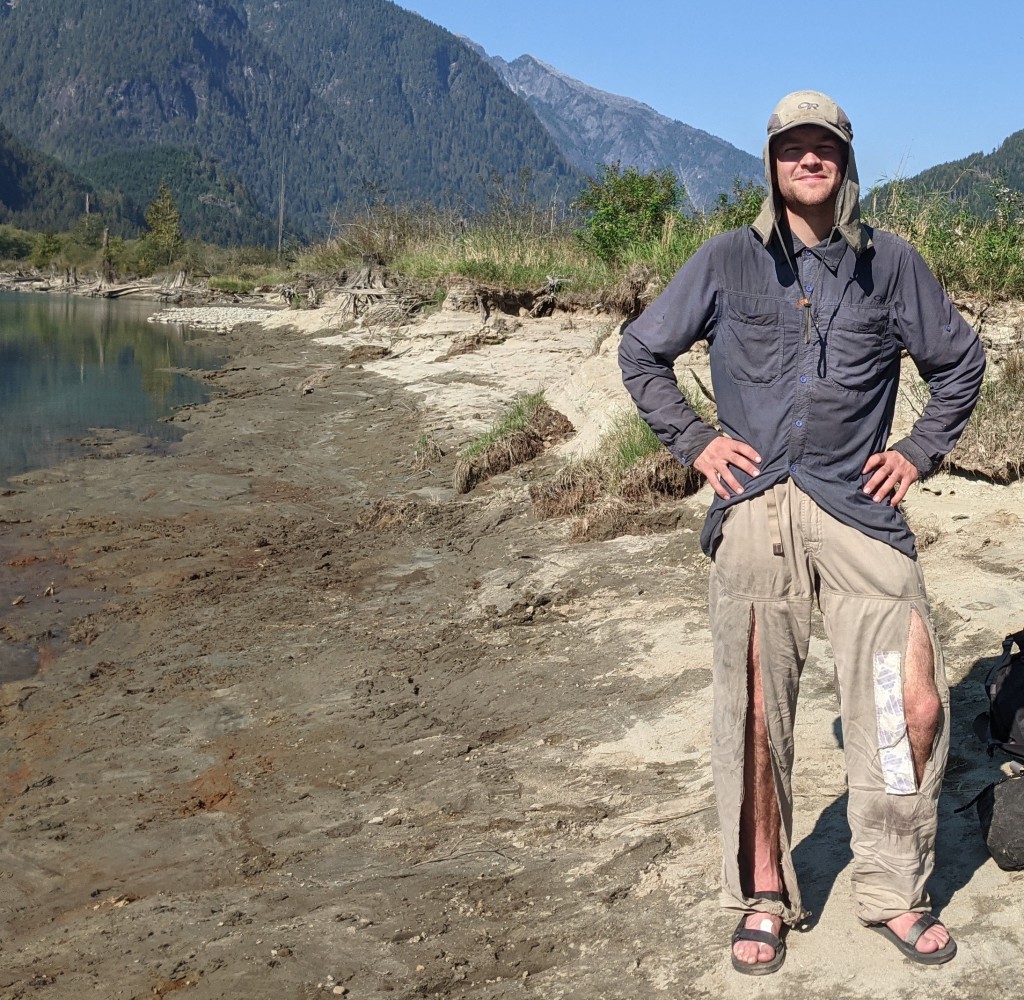 The next day we were very happy to get out of the rocky, avalanchy wasteland around our camp and bushwhacked quickly down to the river. We marched back down the road pushing the bikes, and then and loaded up the canoe. Earlier, with a bird’s-eye view from the water platform, we thought we had identified the main channel of the river into the lake, but this turned out to be choked with logs. It was a little sketchy bumping over the logs and around them in the current, and we were lucky not to capsize (goodbye bikes!). Probably this would be easy at higher water. It turns out the one passable channel was not the deepest one, and even some skiffs with shallow draft are able to navigate it—if they can find it. Canoeing out was a pleasant rest for the sore feet and sunny, overall uneventful, except that several motorboats did their best to swamp us with their wakes, waving cheerily as they passed, and a boat pulling a wakeboarder nearly ran us over. Arriving back at the car we had a little taste of a kind of personal hell—the Dirt Church swarming with ATVs, lifted trucks, speedboats, drones, and dirtbikes, hazy with dust and the sharp smoke of a nearby forest fire, pounding music, and people camped (for some odd reason) in the middle of it all in the featureless mud. 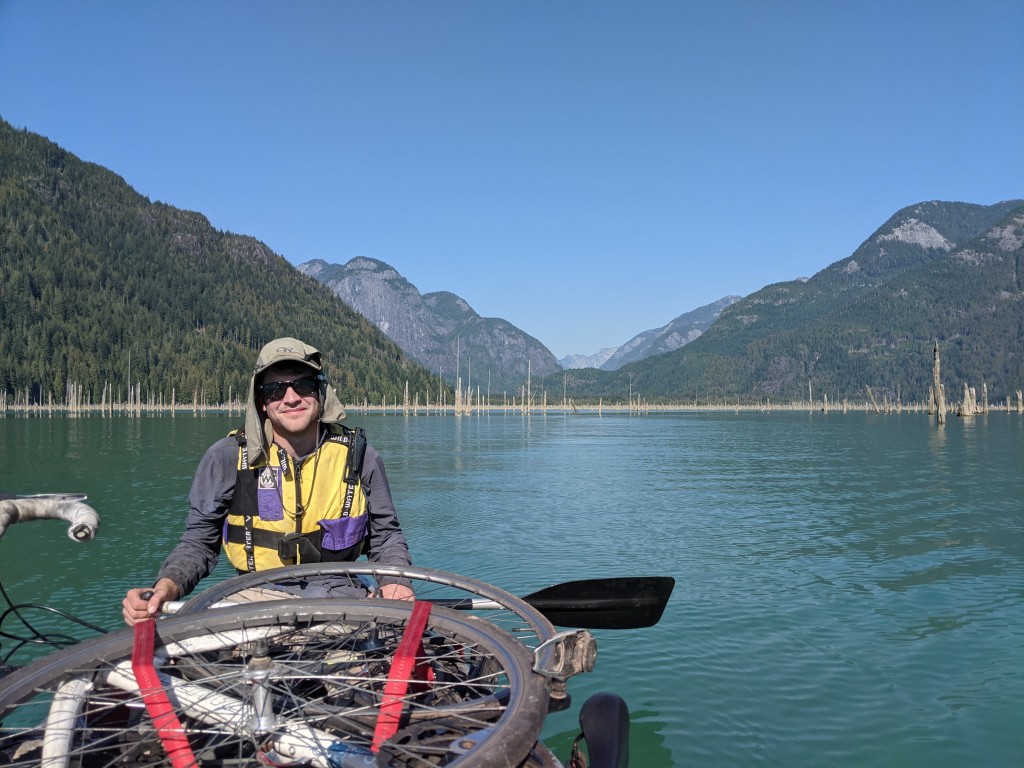 In retrospect, the route up Mt. Judge Howay isn’t really worth the trouble. The peak is notable because it’s visible from a whole bunch of nearby mountains and it’s quite beautiful from afar, but its reputation as a desirable summit isn’t justified by the scenery that we encountered once we left the river valley (or the quality of the rock—ugh). Maybe it gained its reputation because the terrain is difficult, the scramble is more hazardous than usual, and previous parties had to make several attempts. There’s a kind of glory that accumulates this way. Maybe the route was more pleasant in years past, when more of the choss was covered by snow, or maybe it’s better much earlier in the year (but then it would be hard to cross the river). Either way, we both decided pretty quickly we don’t feel like going back.

One Response to A visit with the Judge