Isabella wanted some sparkly snow so I figured Hollyburn was the place to go; not much driving, and I could check if the “Aggressive Squirrel” poster was still up. For squirrel, see https://www.ubc-voc.com/2022/09/18/hollyburn-sept-17. We left Vancouver at 8:30, which was my first mistake. We should have left at 7:30. We toured the Cypress parking lot and found an angry man who told us that we weren’t allowed to drive there because it was closed for construction, but if we chose to park we would need to pay to park. We explained that we were just planning to visit the toilets and then we were going to the Hollyburn parking lot and we wouldn’t trouble him any more and he became our friend. We saw my first-ever electric battery powered bus; maybe VOC should buy one.

At Hollyburn we noted the signs saying how much to pay ($32 to use the XC ski trails) but the ticket office was closed. We found a small place where we could park for free, near the trail where you don’t need a ticket to go up it. The Hollyburn toilets were a great disappointment; it seems that the Authorities had demolished the toilets and provided two skimpy grey plastic outhouses. I would not have demolished the toilets just before the start of the ski season. The trail was perfect; well trampled by the weekend crowd, with about half a metre of rather nice sparkly snow on a base of gravel and shrubberies. Isabella carried snowshoes which were handy for scaring off dogs. I carried micro spikes. We decided to turn around at 1:00 to beat the scary traffic on the Lions Gate Bridge. My GPS said that we had about another 20 minutes to go before the summit. I put on my micro spikes on the way down and they were wonderful. The weather was also wonderful. Due to some “Global Warming” effect I needed only my orange t-shirt for warmth. I ate a lot of tasty low-calorie snow on the way down. Yes, the “Aggressive Squirrel” poster was still up, but we didn’t see the squirrel. Down at the parking lot again, there were a couple of small kids playing on a sled, and somebody on skis was doing “Pizza”. Pretty quiet on a Monday. 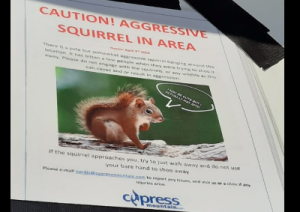 Conclusions: Start early; days are short, but the driving is also short. Avoid weekends if possible. XC skiing is expensive and you don’t even get to ride a chairlift. Even parking is expensive.