I awoke Monday morning expecting to open my eyes to my dorm room, and laptop computer sitting mere inches away from my face, out of pure habit. It’s amazing how difficult it is to shake five years of habit. Merick probably thought something similar, briefly, before opening his eyes to realize that he wasn’t going to work. And I certainly wasn’t going to class on this chilly moonlit Pemberton morning. Papillon the cat beat us out the door, but we were soon saying goodbye to Sam’s cozy house and family and on our way down the winding sea-to-sky, after attempting one last time to convince Sam to join us in our highly responsible social norm defying quest to ski the Tetrahedrons for the week.

We barely squeezed on to the 9:20am ferry to the Sunshine coast. And only made it on due to Merick’s quick decision to take advantage of an inadvertent “shortcut” which appeared between the cement barriers separating the highway from the ferry loading lanes. No one seemed to notice that we pulled in in reverse, and we were soon on the boat to Gibsons. I found myself hauling around an entire grocery basket overflowing with food at the local grocery store. Our previous brainstorming session for four days of meals had somehow gone out the window. Mental lists are weak compared to the temptations of the cheese and veggie aisles. I had no idea how we would ever carry it all, never mind eat it all. But we were working with the philosophy that plenty of good food was at least as important as good powder, and when lacking one you might as well stock up extra in the other department. I pondered the small round of brie I held in my hand, put it back and grabbed the round the size of a full grown snowman’s head. Much better. 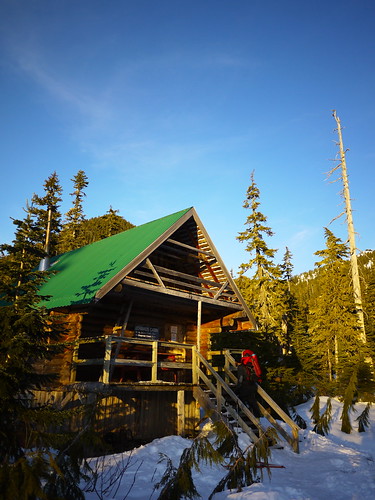 The FSR to Tetrahedron provincial park was an ice rink and we were glad to have the chains with us. Arriving at the parking lot, we spread our gear out and repacked our packs, still damp from the weekend’s skiing at Phelix, to accommodate all that food. By 2:00pm we were skiing up through coastal forests of hemlock, cedar, fir, and spruce. We met the last of the weekend warriors trickling down the trail a while later, and soon had the park to ourselves. Enjoying the peaceful evening ski in, awash in orange evening sunlight, we didn’t stop at the Edwards Lake cabin, but continued on up to the Steele hut.

The sun dipped below the horizon just as we crested the ridge, and we arrived at the Steele hut soon after. Still warm from the weekend’s occupants, we re-lit the fire and spread our stuff out in the spacious hut, watching the moon rise from the porch. We felt like ski bums at a five star ski bum resort. My jacket wasn’t hung up beneath a pile of wet gear, and I didn’t lose my hut booties among a pile resembling a page out of an “Eye Spy” book. It was so peaceful we both fell asleep on the benches, but only after our first feast of many. 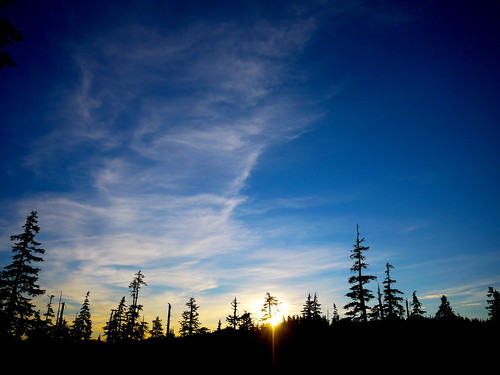 the Sunshine coast lives up to its name Photo: Breanne Johnson 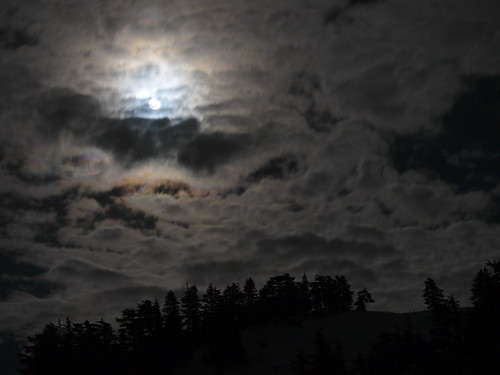 Tuesday morning we awoke to low cloud and skied up Mt Steele to investigate a potential route from there to Tetrahedron peak, a rarely visited peak and the highest on the Sunshine Coast. We were surprised at how steep the East side of Mt Steele was, and how rugged the west side of Tetrahedron appeared. Instead we skied back down to the hut, finding a patch of powder where we crammed in as many tele turns as possible, packed up our stuff, and headed for the McNair cabin in the far corner of the park. 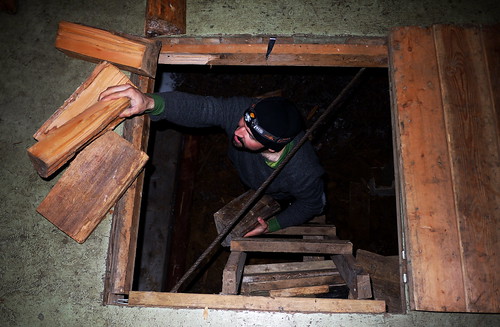 Merick taps into the huge wood supply beneath the cabin Photo: Breanne Johnson

With no sign of anyone having visited the area recently, we followed the markers in the trees. The McNair cabin is far enough away to deter most visitors (about 11km into the park) and sits in a valley above McNair lake. We cleared the porch of a few feet of snow and the log book revealed that we were the first visitors in over two months. 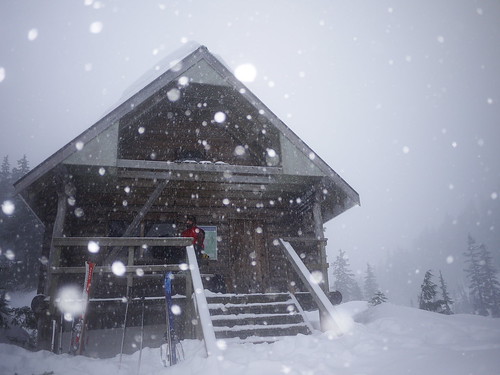 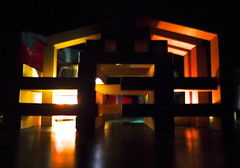 How to entertain yourself for hours building log cabins out of old jenga blocks Photo: Breanne Johnson

The clouds had an attitude of their own on Wednesday. They couldn’t agree where they were off to. But we had scoped out a route up Tetrahedron to at least the cloud line. Who knew what lay beyond but whether it was the peak or the land of Oz, I don’t think Merick or I really cared much. The mountain just provided an excuse to meander upwards through the friendly forest, marvelling at the immense old growth trees, each with a personality of its own in their old age. The younger saplings, all seemingly identical in comparison stared upwards with us in awe. The forest got progressively steeper and our skis skidded out from beneath us on the icy snow surface indented by tree bombs that made it difficult for our skins to grab. Merick continued upwards for a bit longer using his ski crampons while I boot packed after him. Soon enough it became too steep and icy even for him, and we both continued upwards with our skis on our backs.

I found myself wondering if skis thought of this sport as “peopleing” as they rode around on our backs. It started snowing hard and a grouse wandered across the slope above us, as if mocking how difficult we were finding the ascent. He was not the only avian fauna ruling the forest in the snowstorm. Hundreds of birds whisked about from tree to tree. How they fly so quickly through falling snow without goggles boggles my mind. We found ourselves faced by a cliff, and backtracked down and over to a gully, ascended another few hundred feet and dug a bench sheltered behind a tree from the blowing snow for lunch number two. 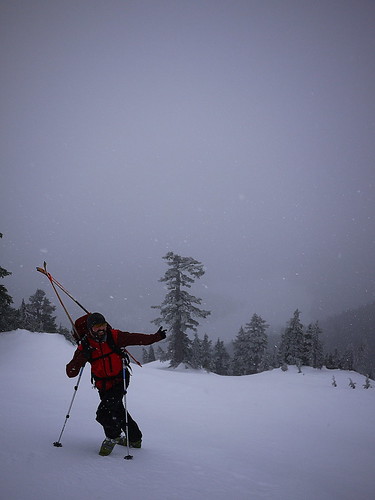 From here we bum slid, skied, kick stepped, and tumbled back down the mountainside. 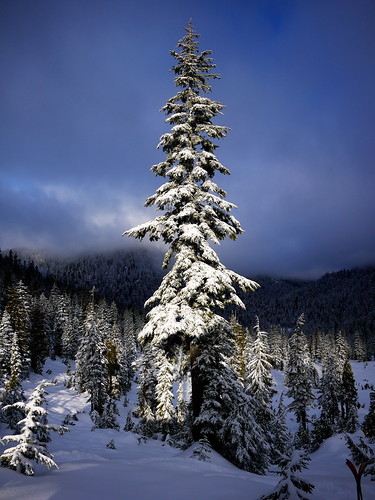 We awoke Thursday morning to just under a foot of fresh snow, and skied partway up Panther peak for a few turns. A glimpse of Rainy mountain in the distance had us plotting a return trip to ski its sleek looking slopes at some point in the future. We skied out with only one slice of bread left in my pack. We had accomplished the feat of eating the huge amount of food we had brought through the simple method of lunch number 1,2,3, and the same with dinner. following a set of three unidentified set of animal tracks almost the entire way, half filled in with snow. They appeared very similar to snowshoers tracks, with a large stride, but were erratic like a pack animal and wandered across and off the trail, making detours and loops. I could only attribute it to a family of the rare coastal breed of bearded sasquatch.

And so ended this mid week’s ramblings of the VOC Ski Early Retirees. Although we hate to be a bad influence, clearly this is the right way to spend the week…