How Christian’s awesome-ness saved my day

Oh dear, what a trip. It wasn’t off to a particularly auspicious start when I was woken ten minutes after the scheduled pick up time by Line calling and wondering where I was! But I hurriedly grabbed my gear and some breakfast and was out the door with enough time for us to make it to Tim Horton’s in Chilliwack at the scheduled time. There we met with Noriko and Ben’s groups, picked up a few more members of our crew and then set off to regroup at the magical heated washrooms along the Coquihalla highway. At the washrooms, we got changed, put on boots, filled packs and I was just going to put on my skins when I realised they weren’t in my bag. Or in the car. Or in anyone else’s bag. I was so sure I’d had them! But somehow in my sleep befuddled state I’d managed to leave them at home. I was just resigning myself to hitch hiking or a day spent waiting at the car when Christian’s amazing-ness saved my day. He gave me his skis and skins and took mine, with the initial plan being to see whether he could keep up with us by side stepping! After a while it appeared that that wasn’t the most efficient method of travel, so someone came up with the idea of strapping branches to the bottom of the skis to create friction. With donations from some kindly nearby trees and a number of voile straps, Christian rigged up some make-shift skins which apparently worked quite well, to the extent that we still couldn’t keep up with him! 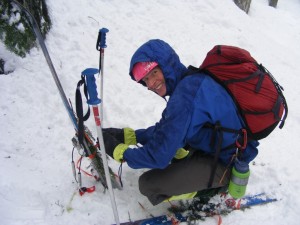 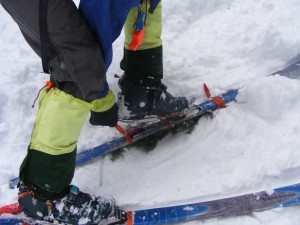 After an hour or so of skinning/branching, we found another VOC group who were just taking their skins off ready to ski down. “What?” we thought, “it’s only 11, we’ve got hours more skiing to do, no way are we turning around now!” Later we realised that they may have been onto something…. But I’m getting ahead of myself. So we said hello and pushed on. A bit further on we came across Ben’s group setting up camp and promised them we’d go track up the good snow before they got there. It wasn’t too long after that that things started to get interesting… We reached the ridge and suddenly the wind increased tenfold. I thought I’d experienced strong winds before, but I’ve never experienced anything like that! We could only communicate if we were huddled close together and yelling at the top of our lungs, and at times the driving ice rain was so cold I couldn’t feel parts of my face. Johannes put a positive spin on it and called it “free exfoliation”, but actually I would have been quite happy to pay not to have it! Christian checked our morale and suggested the possibility of mutiny, but by that point none of us were quite miserable enough to want to be the one to pull the plug, so we pushed on. I sang songs to myself to try and trick myself into thinking that this was actually really fun, but I wasn’t fully convinced. We decided the Flatiron bowl, where we wanted to ski, would be more sheltered than the ridge so we planned to stop for lunch there, but the combination of low blood sugar, fogged up glasses, white out conditions and insane wind swept me off the feet on more than one occasion. Although it did make a nice change to be falling over from something other than my lack of skiing ability! Finally we made it to the bowl. If anything the wind was stronger, visibility was even worse and balance non-existent. We huddled together yelling options at each other when Line asked whether anyone else thought that with high avi conditions, no visibility and wind which was stronger than gravity, maybe this wasn’t such a good idea. With the suggestion made everyone quickly joined in on the mutiny and we turned back to try and find somewhere vaguely sheltered where we could eat something. I was promptly knocked off my feet by a strong gust and huddled on the ground until it was over and I could try and get back up again, by which point I was half covered in windblown snow. Eventually we made it to a spot where the wind was fractionally less insane, and dug a pit so we could practice being penguins while shovelling some food into ourselves. It was nice to be a bit out of the wind, but it still wasn’t exactly what I’d describe as a pleasant spot, so we ate quickly and then pushed on. Finally we reached the other group’s campsite which was out of the wind and stopped for a proper lunch. This was one of the rare occasions where I was quite happy to leave that campsite knowing that I was going home to a nice warm bed while they were staying out for another day!

The skiing picked up from there, although I’ve never really understood the expression “coastal cream cheese” until now. I got a few turns and lots of falls in before we made it back to the cars, where we discovered that the parking lot had turned into a lake. We waded through and made it to the safety of the heated washrooms where we peeled off our soaking layers and steamed up the windows. We discussed leaving Johannes and Christian, who were meant to be camping with the other group for the night and heading out for another day trip tomorrow, but figured we’d better wait and make sure they actually showed up. So we pulled out the ukulele, sang some songs, dried off with the warm hand driers in the washrooms and ate cookies. After it had been dark for a while we began to worry, but they showed up in due time. For some strange reason I can’t comprehend, all the dual daytrippers seemed somewhat less than eager to camp out in the rain and then go battle the wind and driving ice rain the next day in order to ski some more cream cheese, so we ended up being four cars on the way home instead of the intended one!

All in all it’s the closest I’ve been to type 2 fun on a trip, but there was still a lot of type 1 fun and I’m definitely glad I went. And I promise I won’t ever be so disorganised as to sleep in and forget my skins again!

3 Responses to How Christian’s awesome-ness saved my day