Snorkelling at the Duffey

Well we had to begin the day with a somewhat brutal 4am start, with a pick up at 4.45am, but some napping in the car helped me top up on energy somewhat! We reached the car park early (an extra 20 minute nap!) but eventually the Tele-Transporter, Evgenymobile and Pemby-Butt showed up with the rest of the group. We skinned up and set off on our brave adventure up Mt Taylor!

The scenery was stunning, but the sun had yet to put in an appearance. The promise of the fresh, lighter than air snow beneath our feet however gave us wings like the sun never could! We eventually reached the top of our first run – a beautiful, open slope with no trees to crash into! And it was marvellous. 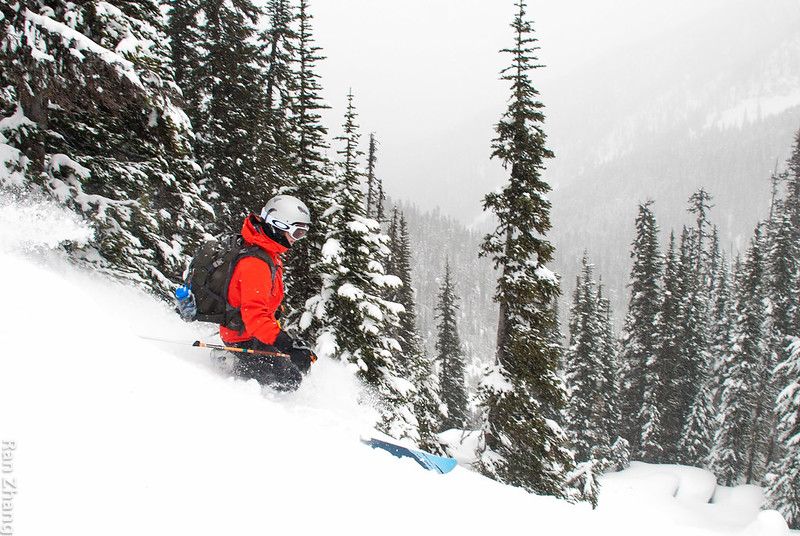 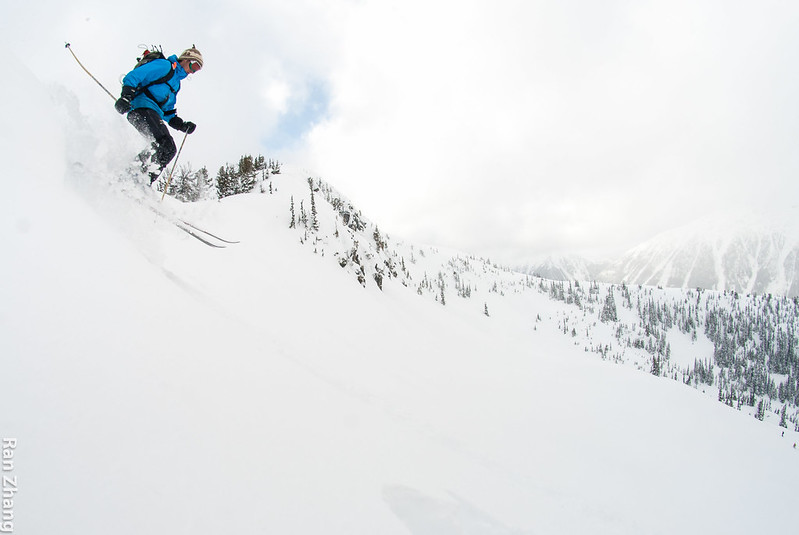 Although the trees in the section after that bit kept me on my toes…. We skied back down to the lake, took a 5min break to put skins back on (for me, for the fast skiers it was significantly more), then skinned up a new slope, where I found some very friendly Whiskey Jacks who were very interested in my bagel. I had one sitting on my hand, one on my poles and one on my boot!

4 runs later on the most unbelievable, fantastic powder, we’d covered about 1600m elevation and I’d gotten more skiing in in one day than all my other back country trips put together! 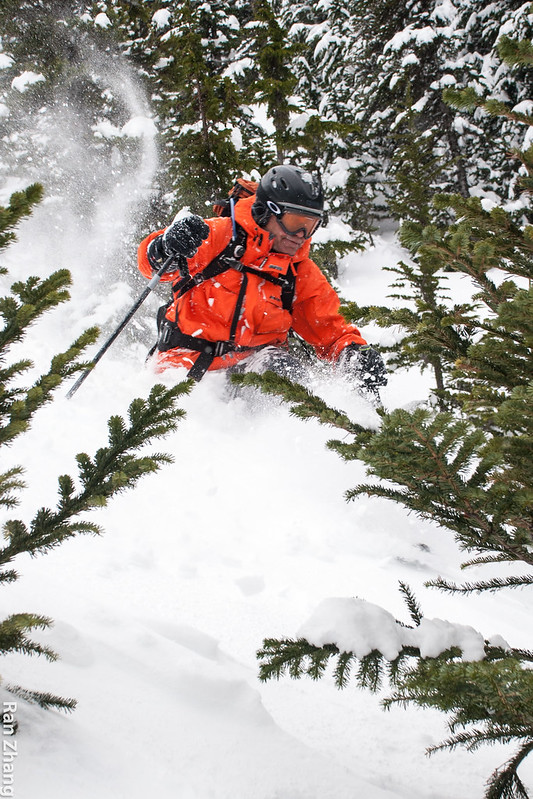 We’d had to do a bit of skirting along ridges to stick to more stable snow and we didn’t make it to Heartstrings because the snow wasn’t stable enough, but it was beautiful and exciting all the same! A few of the more hard-core members decided to head up for another run while those of us who had legs crumbling beneath us decided to make it back to the cars while we still could.

Back at the cars, Sam’s dad Tom said he’d managed to injure himself during the day and so wasn’t going to ski with us the next day. He was going to get Sam to drop him home in Pemberton, and then decided that if he was going home anyway why shouldn’t we all go with him?! Obviously there wasn’t much opposition to this plan (as hard core and keen to tent as we are, we figured it would be rude to turn down such a generous offer), so 15 smelly skiers turned up at Sam’s place, much to his mother’s surprise who was expecting a quiet night at home without the boys, but she quickly recovered her surprise and then offered us freshly cooked homemade pizza! We then took over the kitchen and put all our car camping ingredients together into a fantastic pasta-couscous pot luck, which disappeared as soon as we could get it to the table (or before). After some hilarity looking at the photos from the day while allowing our dinner to digest we agreed on a 6am wakeup and stretched out in the basement for a warm, dry night’s sleep.

Next morning Nick set off the fire alarm to make sure we all got out of bed in time for the maximal amount of skiing (well, he swears it wasn’t him, but he was pretty keen on getting us all up so I’m not convinced….) and Sam’s wonderful parents cooked us an enormous pot of oatmeal and fed us fresh bread for breakfast! The snow falling around the house made us excited for the skiing, although Tom nearly got us when he rang to check road conditions and told us the Duffey was closed, until we remembered it was April 1st.

Well we made it to Mt. Chief Pascall without any troubles and headed out again. And oh the snow! We’d thought it was marvellous the day before,but it was nothing compared to Sunday! Powder so deep and light you’d drown in it. We got to the top of the first run and Ran pulled out a snorkel to prevent this untimely end. 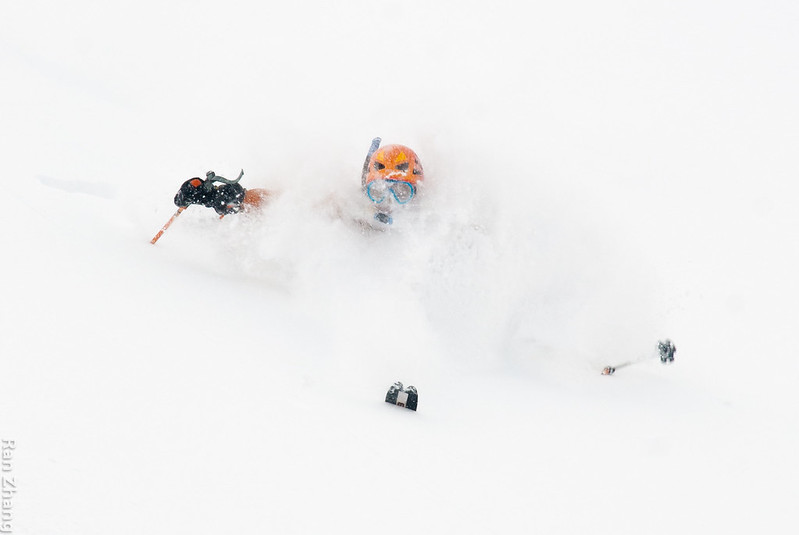 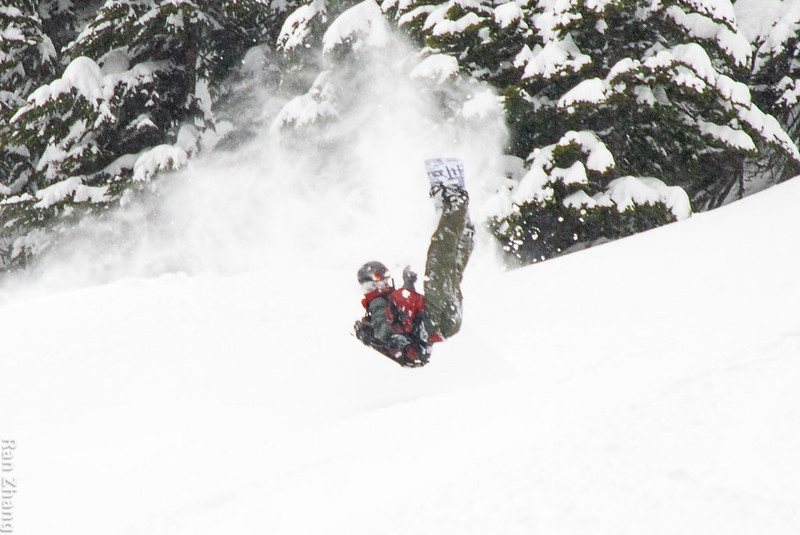 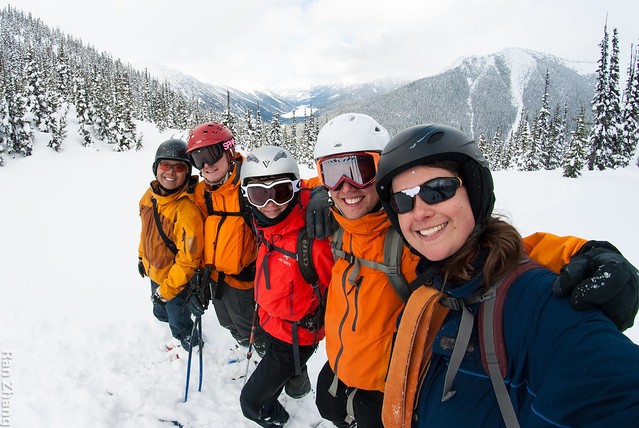 Nick set off in a cloud of powder to take some photos, then Ran showed off some beautiful powdery tele-turns. Inspired, I set off next and promptly fell. Floundering in the powder I managed to get on my feet again, set off once more and promptly fell again. By the time I made it to the bottom of the run I was questioning why exactly everyone thought powder was so wonderful! It was heavy and difficult to turn and awful to get up in! Once I caught up with the others they gave me a few pointers however and on the second run I suddenly understood!!!! This stuff is MARVELLOUS!!! I could ski!!! I made a whole run feeling pro (possibly not looking as pro as I felt however….), didn’t fall over and finally understood why people like skiing through trees. At the bottom I was raring to go for another lap and we headed up again. 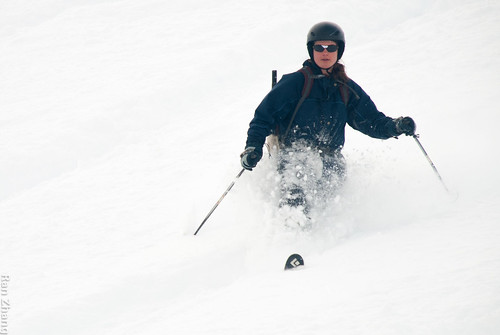 After a couple more runs people had started heading down and as much as I wanted to join those heading back up for another run, I didn’t think my legs would take it and it would seem I made the right decision…. I was so tired I was right back to beginner level, falling at every bump. Poor Alfred, Nora and Bruno who had to ski out with me for the second time, I appreciate your patience! We had fun though, the sun had finally come out and we were trying to remember the lyrics to Barrett’s Privateers. Back at the cars we caught up with a group who’d already headed back and who generously warmed us with rum and we waited for Nick and Sam, who eventually came back triumphant that they’d skied over 2000m in elevation.

All in all I have to say I was pretty stoked with the weekend. When I arrived in September I’d never been off a resort and didn’t even know what telemark was. Well, thanks to many patient teachers, I have come a long way since my first trip to Elfin Lakes where I didn’t have the slightest clue how to turn a corner, and this was the first back country trip where I really felt like I was actually skiing most of the time, not just falling down a mountain while wearing skis!!! I think I’ve been bitten by the tele-bug.

One Response to Snorkelling at the Duffey