Easter Weekend with The Veenstras

Not wanting to spend the weekend in the city and having nothing to do, I ending up join Christian and Line’s trip to Mamquam. It was a good life choice.

I got pick up outside Fairview at the relatively comfortable time 6:30. Pretty soon, we ended up at the end of Skookum creek FSR. As Christian mentioned, the area was being actively logged, and as such, the road was plowed and snow free up to ~750 (?) meters. Essentially, we were able to drive quite high and not have to deal with slide alder.

Our goal for the day was a lake in a hanging valley, bellow the Mamquam ice field. Anyway, we skinned along the logging road for ~3 and ½ hours, it was a bit of a slog. Occasionally, we were able to see the peaks on the mamquam ice field, pyramid peak, and the peaks around Mt. Garibaldi.

Christian had brought along a pair of shears. While Line and I kept skinning, he would race ahead and trim the branches of the slide alder on the road. The result was a distinct lack of bushwhacking. Thanks to his hard work, there were no branches in the face, and forward progress was unhindered.

Shortly after Watersprite creek, the logging road splits into two, one fork going up and one going down. We took the left fork, and dropped ~ 50m of elevation then continued up towards the hanging valley. The right fork (and another set of tracks) went to the top of a ridge and (what we assumed at the time was off route). It turns out that it is possible to traverse along the ridge, drop down to a meadow, then continue up to the hanging valley. 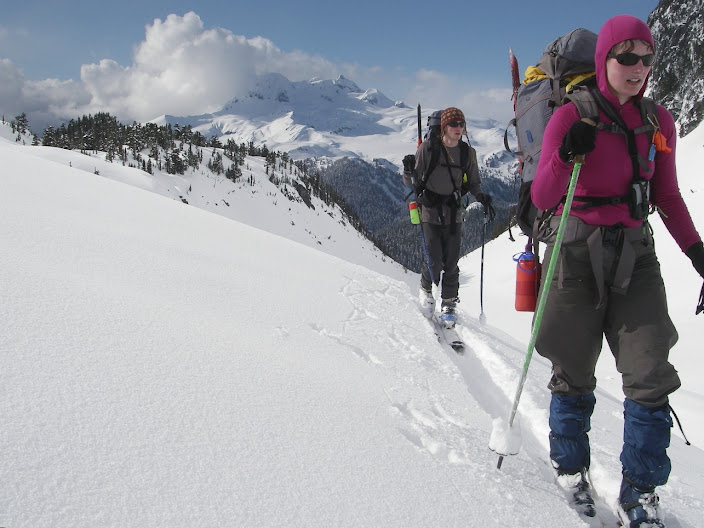 At the hanging valley.

At the end of the road, we reached a clear cut, and started to climb into the forest. Our goal was a saddle between to high points. Soon enough, we ran into the other groups skin track. Once we reached the saddle, we traversed along the ridge while enjoying great views of the Garibaldi group and Darling peak. Once we reached the lake, we considered continuing upward and camping by a second lake. The decision was made easier when wet slides started to come down and cover the ascent route. We set up camp, enjoyed an tasty rice and pea dinner that Line cooked, and went to bed early. 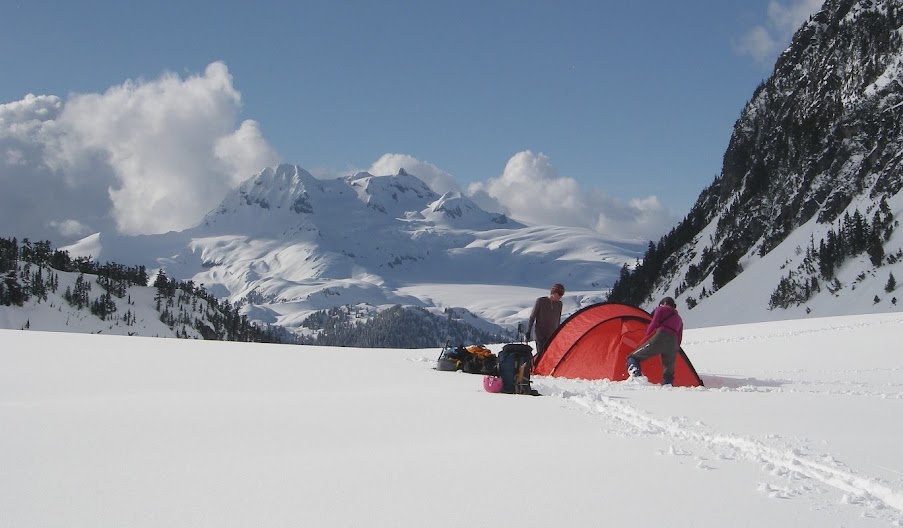 Camp for the two nights

Not wanting to deal with wet slides, we got up at 3 am. It turns out, the weather was not exactly spring like: it was cold and our water froze. Cold breakfast took on another meaning when my breakfast started to freeze on me; I was not impressed. Once we started to skin, the situation quickly changed for the better. Clear skies, a nearly full moon and cold temperatures made for one of the best skinning experiences that I’ve probably ever had. We passed the other group’s camp, and continued up toward the plateau. The cold kept us moving until we reached warm sunshine. 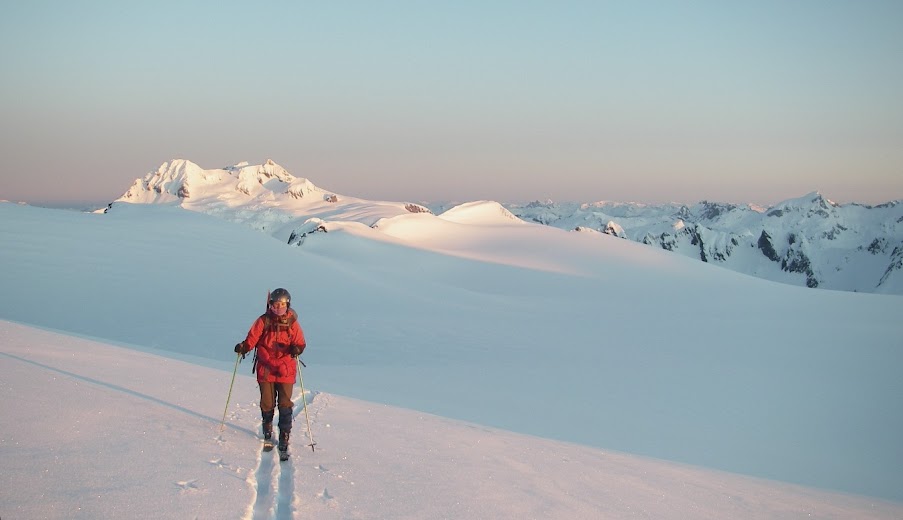 Sunrise on the icefield

Once on the plateau, we contoured around the aptly named Delusion and started up Mamquam. Once at the top views were spectacular: we could see Rainier and Mt. Hood to the south, the Tantalus, Garibaldi, McBride, Sphinx bay, etc. Etc. It was simply exceptional! We skied down Mamquam then climbed Delusion and Darling. The snow was soft and fast- great for skiing. 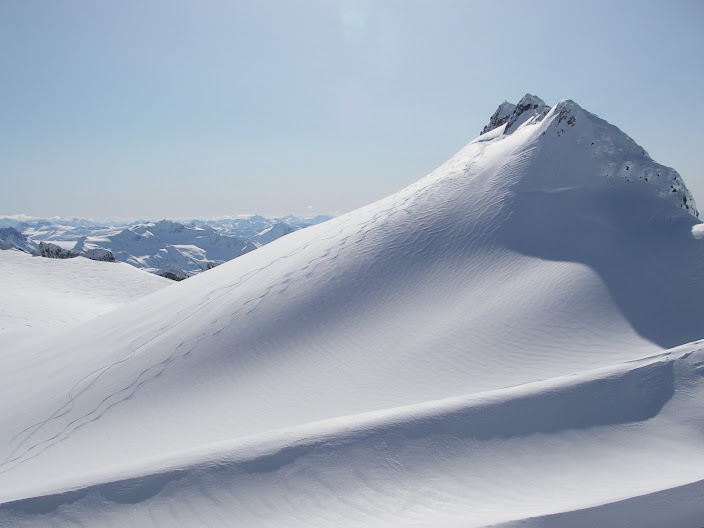 In between Mamquam and Delusion, we met Gerry and Sabine, two people that Christian knew from the BCMC. It was their tracks that we were seeing the previous day. We also saw a large (~8 people) BCMC party coming up between Delusion and Darling.

After skiing down from Darling, we stopped for a break. Christian wanted to climb the last named peak on the ice field: Mirage. I agreed to ski up to the shoulder to see how the climb looked. Line decided to have a nap in the sun. Once up to base of the summit block I decided that I was content to go no higher, so Christian borrowed my ice axe an tried to reach the summit. After several attempts at different routes, he concluded that it really wasn’t possible without a proper rock rack. After that we stripped the skins and skied down the shoulder (my kind of fun). It was even good enough for a second run. 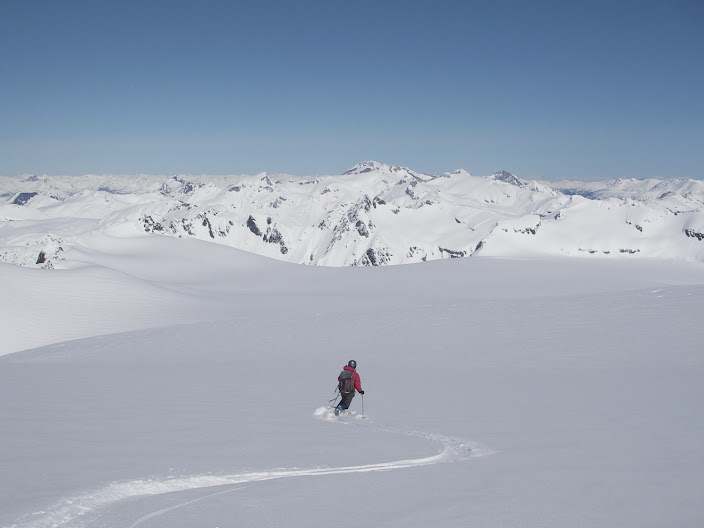 We met Line, skied down and lounged in the sum for the rest of the day. While lounging we watched the large BCMC party faff about on sun drenched slopes. 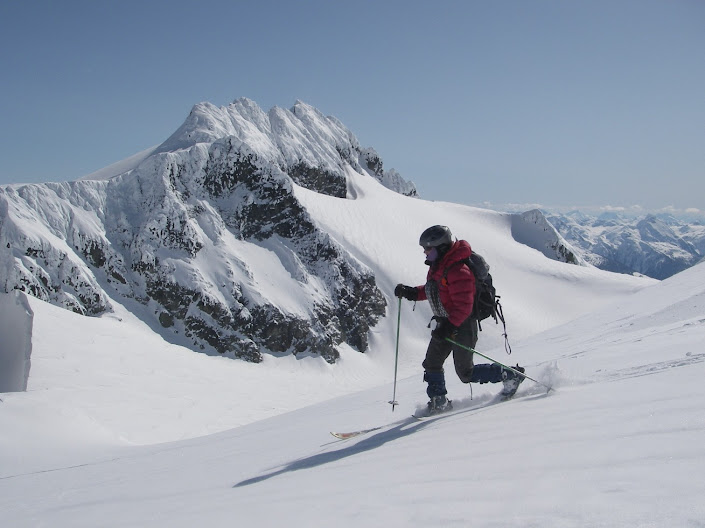 We got up and packed up camp. Skiing down was a serious case of survival skiing: breakable crust and heavy bags made life tough. We worked our way down and were at the car by about 2 ish.

Thanks to the Veenstras for taking me with them.

All photos by Christian Veenstra.