Back in December, Sam McKoy and I, along with 4 others, attempted the North Joffre Creek Horseshoe Traverse. Our weekend of good weather became a Sunday of good weather and we started out from the Duffy Lake Road in rain. Michal wrote the trip report, but I, and the others that I talked to about it, were keen to give it another go later on in the season. Now that we reached April, I hoped that with the deeper snowpack, the alder would be less troublesome, the deadfall buried, and the swamp covered when Sam decided to lead a return trip – the second edition of his Space Odyssey/Another Brick in the Wall series.

Early on Good Friday, Julien Renard and Petra Klupkova rode with me on our way to Pemberton to pick Sam up. The other car was running behind us, so I pulled into a parking space between huge trucks with sleds and grabbed some extra breakfast at Mt Currie Coffee before heading to the trailhead. Before long, Olek Splawinski, Conrad Koziol, Breanne Burkinshaw, and Martin Matej pulled up and we were off! 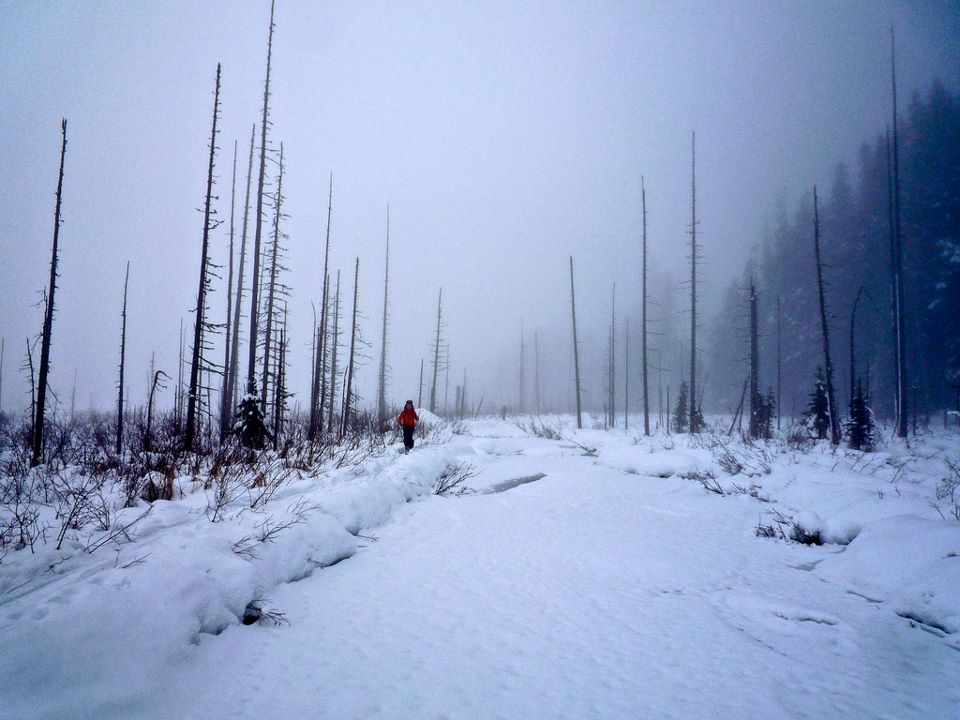 The hike up the road and to the swamp went quickly in the beautiful weather, aided by the additional snow over the cutblock that prevented the post-holing nightmare of December. We crossed the swamp and spaced out as we headed up the avalanche path towards the lake under Cassiope and Saxifrage, where we had lunch in the sun. Another party of two had been leapfrogging us from the trailhead and started breaking trail to the col, but we passed them yet again, past a ubiquitous heli-drop zone and switchbacked up to the ridge to one of the sub-peaks of Cassiope. The view was beautiful, a panorama of Cayoosh,  Lilloet Lake, Mt Currie, and beyond – with one really, really big cloud sitting right above the town of Mt Currie. After Sam ensured that the drop in point off of peak was good-to-go with some vigorous pole-wacking, some of us dropped in and skied the face  and back to the col. The others returned along the up-track and we all skinned back up to head towards the col under Saxifrage. 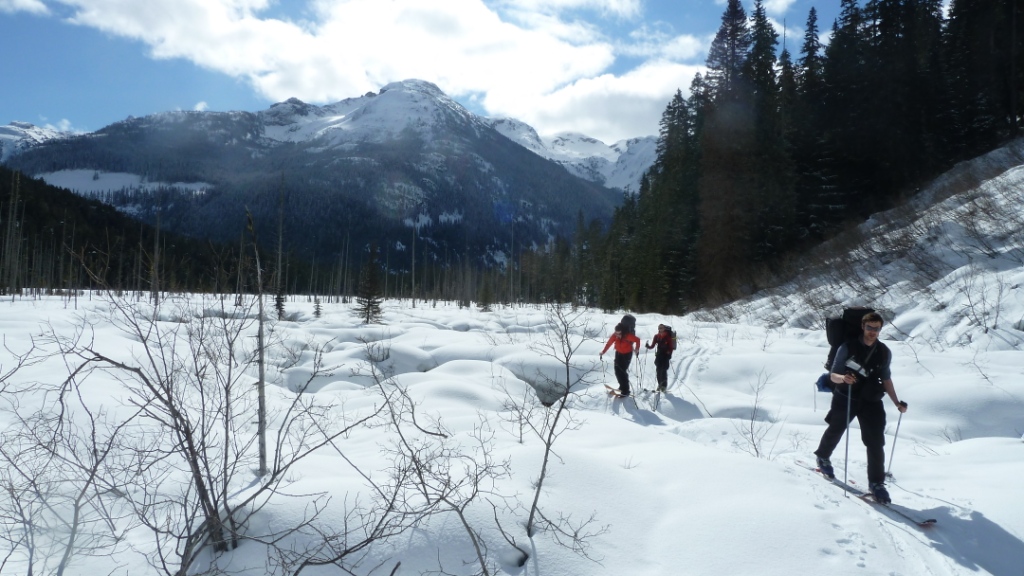 Sometime during this ascent, the massive cloud moved our way and started pelting us with graupel and took away our visibility. Just under Saxifrage, we decided not to climb it, as it was getting later in the afternoon and the visibility was poor. We started skiing down towards the White Lakes, our destination for the night. There was one steep pitch on a small glacier, which caused some worry with sloughing and crevasse-looking windlips below. As our party of eight went down, mountains around us started to emerge from the white and by the time we were at the lakes, the beautiful scenery had completely emerged. We set up camp and started cooking, enjoying the sunset and Martin’s ukelele as the temperature dropped. With Saxifrage above us, we decided that it would be worth an ascent the next morning. 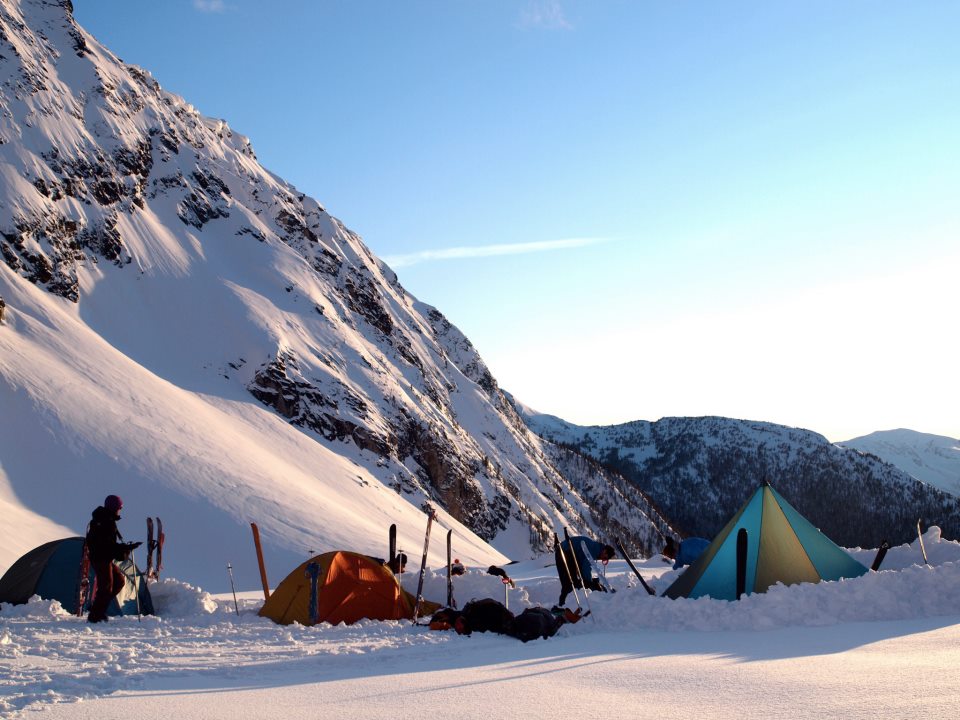 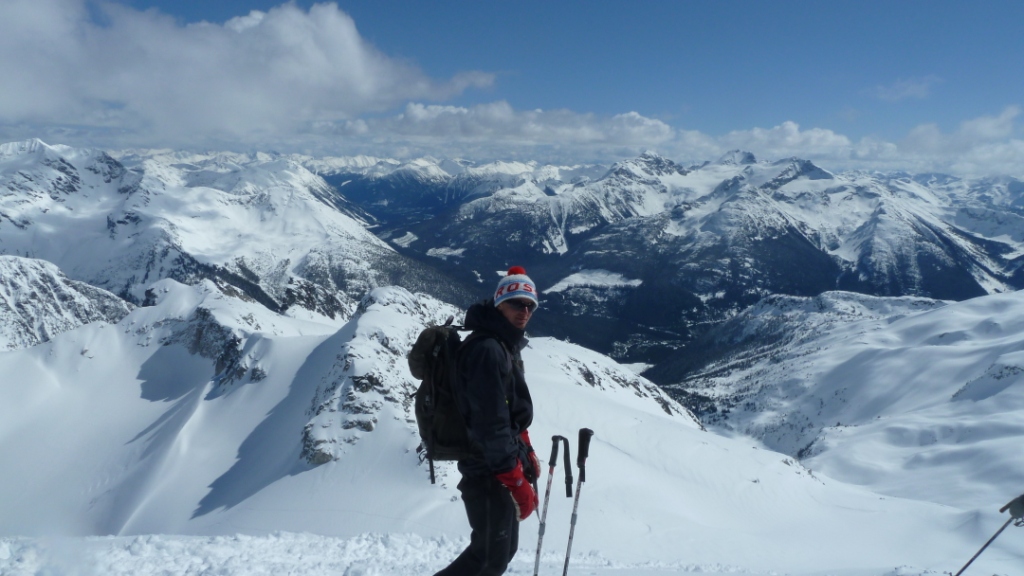 Sam ready to ski off of Saxifrage.

The next morning was casual and allowed for a nice sleep in, well after the sun had risen and its warmth started to tempt us from our sleeping bags. After breakfast, we started up the north side of Saxifrage and soon gained the ridge. Up one peak, down to the saddle, and finally up to the summit and …. people! Martin thought he had spied another group near the summit, where we caught up to them. Sam, Olek, Julien, and I decided to descend the east face, while the others returned the way we came. I was jealous of their powdery descent while skiing down the crusty face. The four of us regrouped and skied back to the camp able to enjoy the slope that had caused so much trouble the day before. We worked on tans, enjoying lunch while the others in our group descended before heading onwards.

The ski up the the Oleg-Olds col was incredibly warm in the late afternoon sun, which just started nearing the horizon as we got to the col. Sam, Oleg, Julien, and Conrad ascended Oleg (almost Olek…..) before we went down on Place Glacier and set up camp. For the second night, my tentmates and I built a snow wall for my circus tent with a weak point – exactly where the wind came from. This time, however, we thought we had been smart and dug it deeper, so I had the ingenious idea to cut what I thought was a staircase down to the entrance. This wind tunnel provided a brisk breeze all for us all night.

The next morning we again had a leisurely breakfast (it’s a holiday, after all) and most of us headed up towards Mount Olds. Sam, Julien, and Oleg opted to bag the summit (the 4th this trip!), while Conrad and I enjoyed two powdery runs before heading back to camp.

Panorama from 8000 ft peak. Saxifrage on left, Place Glacier to the right.

All packed up, we descended off of Place Glacier to a small lake at the head of Joffre Glacier, where we had lunch and refilled our water bottles. Up to this point, we had been relying on John Baldwin’s route from his guidebook, but now we followed his track right up to the insignificant, unnamed 8000 ft peak – the last of the ascent on this traverse. Summiting took a short bootpack up before we started our descent on a icy “pillow line.” Everyone chose their own adventure down this short slope – some sideslipping and others bootpacking.

Our descent was just in time – the blue skies of the past days had clouds moving in as we started our long run down from the alpine and down to the logging road. The warm weather made for heavy snow and some challenging skiing. The logging road was quite clear of alder and made for straightforward escape victoriously to the cars, as Sam and I tried to fashion alder as Easter bunny ears on our backpacks.