After a mass exodus of trip participants due to fear of becoming lost forever in the Lost Valley, four brave souls met at Mt. Currie Coffee at 8 am on June 28th ready for a four day venture into the eastern Cayoosh Range.

We started up the Hurley Silver Mine road after parking 1.5 km away at Blowdown due to rumours of car bashings at the Hurley Silver Mine pullout. The logging road quickly became overrun with alders, but we emerged a few hours later into alpine meadows blanketed with yellow and dotted with Indian Paintbrush.  Heading northwest towards the Barkley Valley, we scrambled Elliott S3 as the first few drops of rain began. Glissading down into the Barkley Valley we set up camp by a lake at the southeast end of the valley. The rain and wind picked up so the four of us sat huddled under Jeremy’s tarp and began the first of what was to become many games of Contact. 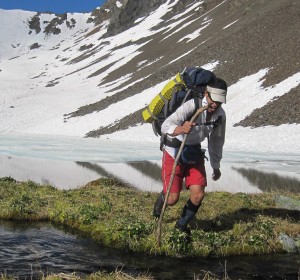 The forecasted bluebird sky made its appearance on Saturday morning as we continued deeper into the Barkley Valley and north up to Twin Lakes. We hiked through pristine wetlands, over avalanche debris and along an ATV trail until it ended just below Twin Lakes. Dumping our gear at north Twin Lake, we scrambled our way up Crystal Peak via its eastern ridge. 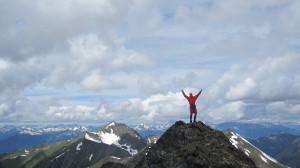 Felix made a second trip to our lunch spot along Crystal’s east ridge to retrieve his precious naan bread before we headed down into the Lost Valley. The entrance was filled with choss covered slab and forced us into semi-controlled scree slides onto the snow slopes below. We glissaded into the valley and camped by a lake spotted from the summit of Crystal. After a swim in the lake bordered by snow and fed by a waterfall, we spent the evening consumed by our surroundings and of course, games of Contact. 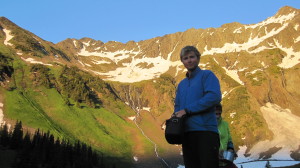 Sam in a Lost Valley sunset 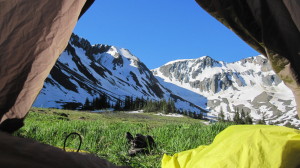 Morning in the Lost Valley

On Sunday we could be found making our way up Lost Peak. We wound around the flanks of Nraiteskel scrambling over boulder fields until we came to a magical creek that flowed around and under boulders. After passing another lake, which I vowed to swim in upon our return, we made our way up the actual mountain. It was a nice scramble up large, solid boulders and made for some fun hopping and manoeuvring. As we never climbed Found, Lost’s neighbour, I guess we’re lost forever! We descended via snow fields to the east of our up route. 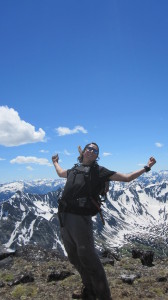 The lake beckoned with even more fervour on our descent so we lounged around and swam for as long as we could muster. We decided to return to our camp through the valley as opposed to skirting around the boulder fields on the northern edge of the valley. Stinging legs from bushwhacking in shorts called for another jump in the frigid waterfall lake.

On Canada Day we awoke to yet another bluebird sky and spent a glorious morning in the alpine heading out of the Lost Valley and scrambling up an unnamed peak which we dubbed Pista Vista. Welcome to the summit of Pista Vista

The original plan was to do a small loop in the Lost Valley and then head back out via the Hurley Silver Mine logging road again. After looking at the contour map, however, we decided it would be much more exciting to make a complete loop and head back out through the Melvin Valley and hitchhike back to Blowdown to get the car. According to a glance at a bivouac map, there was a trail down the Melvin Valley that met up with the Cayoosh River and the highway. For the first hour after leaving the meadows and into the forested valley floor there was no sign of a trail. Eventually I hear a yell of “cut log!” and many whoops ahead of me. The trail did indeed exist, but it turned out to be like one of the fleeting shadows that appeared occasionally on this clear day. The smallness of the trail combined with extensive avalanche debris made it extremely difficult to follow. The 5 km down the Melvin Valley became a mixture of straight bushwhacking, bushwhacking while still on the trail, and a few brief moments of clear trail following. 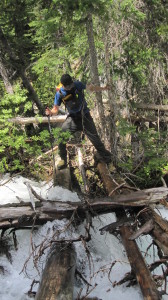 We reached the end of the valley after about 5 hours to find the highway…but with a river in between and no bridge! We scouted around hoping that the logging markings and bit of trail work meant there would be a bridge, but to no avail. The highway crossed the Cayoosh River 1.5 km downstream, but the forest that had to be crossed was incredibly dense new growth. My previous strategy of ploughing through no longer worked and I resorted to a sort of worming action. It was slow slow going. In an hour we had barely gone anywhere so we veered left away from the river and highway and began walking along boulder fields. We started making much better time, but the contour map made it seem like our route could cliff out before the highway crossed the river. It did get quite steep, where an unplanned swim seemed much too plausible, but we rounded one more corner to see the relieving sight of a grey structure across the river! All the bushwhacking reminded me what it would have been like before the days of maps and exploring was truly exploring. The faces of bushwhackers

Jeremy hitchhiked to Blowdown to retrieve the car and we were on the road back to civilization just like that!

Thank you Sam for being our fearless trip organizer!