Following a slightly earlier start than some of us are accustomed to on a Sunday morning, we arrived at Cypress Bowl at around 7:30am. Even at that early hour, the local wildlife – biting mosquitoes – strongly encouraged us to quickly hit the trail. The first few kilometers of clear, smooth “improved trail” allowed us to ease ourselves slowly into the hike, climbing steadily through the firs. A large fallen tree lying right across the path marked the end of the “improved trail” and the start of the ascent to St Mark’s Summit, which was steep and featured numerous roots and rocks, which required the first serious legwork of the morning. Around three hours into the hike, after a steep ascent, we reached St Mark’s Summit and were rewarded with stunning views across Howe Sound to Bowen and Gambier Island and Mt Tetrahedron in the distance. It was a good spot for breakfast, or, for some of us, brunch. 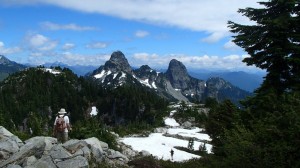 Fed and watered, we pushed on. Between us and the base of West Lion stood the two summits of Mount Unnecessary, which did not live up to its name given the views from the summits and the fact that the trail over them is the only one to the Lions. The trail became slightly harder to follow, bisecting at points only to merge again a short distance in front. It also became more undulating with steep descents and climbs between the two summits. In some places, some kind soul had attached ropes to help the hiker up or down tricky spots.

We reached the base of West Lion at around 2.30pm after a short semi-scramble from the base – a brief warm up for what was to follow. There was quite a crowd at the base: everyone from sunburnt tourists to serious hikers. They were sitting around, soaking up the sun and resting tired legs. Taking up a spot near the base of the scramble, we refueled once more and eyed up the scramble to the summit, around 40m above. 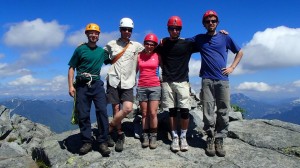 The scramble began with a relatively straightforward, but highly exposed section with vertigo-inducing views downwards. The route then looped around the Lion with a few precarious sections here and there, a few dodgy holds on exposed tree roots and the odd loose rock. Ten to fifteen minutes later, five of us reached the summit. Cameras came out, great shots of Vancouver Island (visible through the clouds), Garibaldi and Skypilot to the north and the docks of North Van to the south were had by all.

The return hike began at around 3:30pm. Our group trailed into Cypress Bowl in dribs and drabs between 6:30pm and 9pm.