The morning of Saturday August 3 found 11 VOC’ers in 3 vehicles driving Highway 99 north to Pemberton, and then northwest along logging roads on the south side of the Lillooet River. The upper reaches of the mountains were hidden in cloud, and after about an hour the vehicles ascended a loose but waterbar-free branch road that switchbacked up the misty hillside. We stopped at the trailhead at a small landing at an elevation of  ~900m and it was here that the team grouped up, while the general plan for the long weekend was announced and the work tools were divvied up.

This new route to the hut is the brainchild of Ben and Christian, and it has required countless hours of map reading and general poking around the bush by several parties to date. These two carried a chainsaw each, along with several kilograms of “chainsaw related stuff”. The rest of the crew chose from a wide array of loppers and hand saws strewn about on the road at the trailhead. Two groups of four formed and pushed ahead along the trail to where the work needed to be done, while Ben, Christian and Yuri trailed at the rear, slowed down by cutting logs and also by their incredibly heavy packs. The clouds were just starting to break up when we started hiking, which made for a pleasant walk through the old high elevation forest. 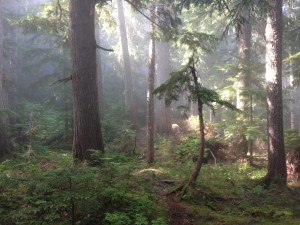 The trail winds its way up to a great viewpoint of Capricorn Creek and the destruction caused by the great Mount Meager landslide that happened almost exactly three years ago. It then enters a very large heli-logged clearcut, which is crossed to the forest on the other side, as the route pushes further and further up the Meager Creek Valley. A second, smaller, heli-logged clearcut is reached and traversed. It was here that the tools were first taken out, and the bush trimmed back along the route. The chainsawers found us and we took some of their bar oil as they seemed to be struggling under the weight they were carrying. A separate party that we passed on the logging road passed us around here, consisting of Fred Touche and two others, heading for the hut. The blueberries were ripe, large and plentiful and proved to be somewhat of a distraction from the trailwork for many members.

We made our way along the route, but as time was getting on we decided to head to the hut, minus Ben, Christian and Yuri who were behind us…somewhere. This section of the route entails walking a portion of a logging road (that provide access to the hotsprings if walked long enough) and entering the forest once more and dropping down to Hotsprings Creek. Some sources call this Pika Creek, such as Matt Gunn’s Scrambles guide. Most of us got our boots wet on this crossing 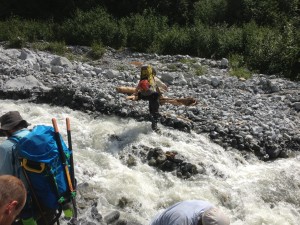 From here there is a lot of sidehilling on steep terrain, and crawling over many downed trees of considerable diameter. There had not been any clearing of the brush here, either. After quite a while, the second creek crossing comes into view. This is Barr Creek. It’s a pretty thrilling crossing as the first half of the log has water pouring over it. 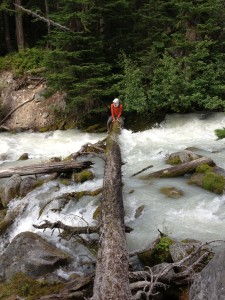 Afterwards, it’s mainly uphill all the way to the Harrison Hut. This was mainly just following flagging tape all the way, while walking along downed logs whenever possible to escape from the blueberry, azalea and devil’s club. After a while the trees thin out, and a moraine comes into view. The route meanders through large boulders and meadows interspersed between the clumps of trees. Finally the hut was in sight, and we arrived at 8:30 or thereabouts. The view to the glaciated mountains was very dramatic. 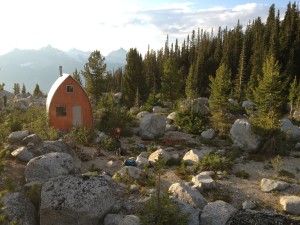 We cooked our dinners and chatted with the 3-person non VOC group who had arrived after us and got ready for bed. By now it was pretty obvious Ben, Christian and Yuri wouldn’t show up to the hut tonight, as was planned.

The next morning we split up into a few parties and worked on various sections of trail. One crew worked on putting trail markers starting from the hut down, until they ran out of markers. The other crews worked on brushing out the underbrush above Barr Creek and also between Barr and Hotsprings Creeks. This was a full day and we were pretty tired when we all showed up back at the hut around 7:30. Ben, Christian and Yuri showed up later as the sun went behind the ridge, and had stashed the chainsaws between the two creeks.

The last day saw us hiking out fairly early from the hut. All of us put in 2 or 3 hours of work time on the way down. Everyone met up at Hotsprings Creek and commenced to hike out together. We arrived at the cars around 6:00. Then there was a funny episode involving Fred Touche at this time. The cars of Ben, Gili and Christian departed in that order. Ben, in front, passed by the two companions of Fred (who was ahead of them carrying one of their packs) and offered them a ride to Fred’s 2wd car that was much further down the road, which was accepted. They passed Fred shortly down the road but didn’t stop to let him know they were on board, thinking Gili’s car, who was a little ways up the road, would pick him up. When Gili passed Fred, Fred asked whether he had seen his two partners. GIli hadn’t, and Fred was worried that maybe they had taken a wrong turn on a spur road or something. When Christian’s vehicle pulled up, everyone piled out and Fred and Christian drove back up along various spur roads for about an hour, looking for Fred’s friends. Meanwhile, they were waiting in his car at the bottom of the hill! Ben, who was also at the bottom wondering where everyone was, drove back up the road and told the congregation where the two purportedly lost hikers were. So then Ben drove up the road to find Christian and Fred. He found them finally, and they returned. Eventually all 4 cars were at the base of the road, ready to cruise back along the mainline to town.

However, less than 10 minutes into the journey one of the creeks we had crossed on the way in was washed out. There were two large diameter culverts that were blocked, and the upstream openings of them were invisible, buried under a mound of debris. I think most of us thought there was no chance of us ever diverting the creek back to its rightful place, through the culverts, but everyone worked hard anyway. Christian’s vehicle towed out logs blocking the culvert while others shoveled out the smaller debris. Slowly the flow going through the culverts increased, and after one critical log was removed with the aid of the chainsaw the flow increased dramatically. The water level going over the road had dropped considerably, and many rocks were thrown into the water to prepare a roadbed for the vehicles to cross one. Eventually after several hours of work, we managed to coax all 4 vehicles across quite readily. It was really impressive what we did, and I’m not sure my photos do it justice. 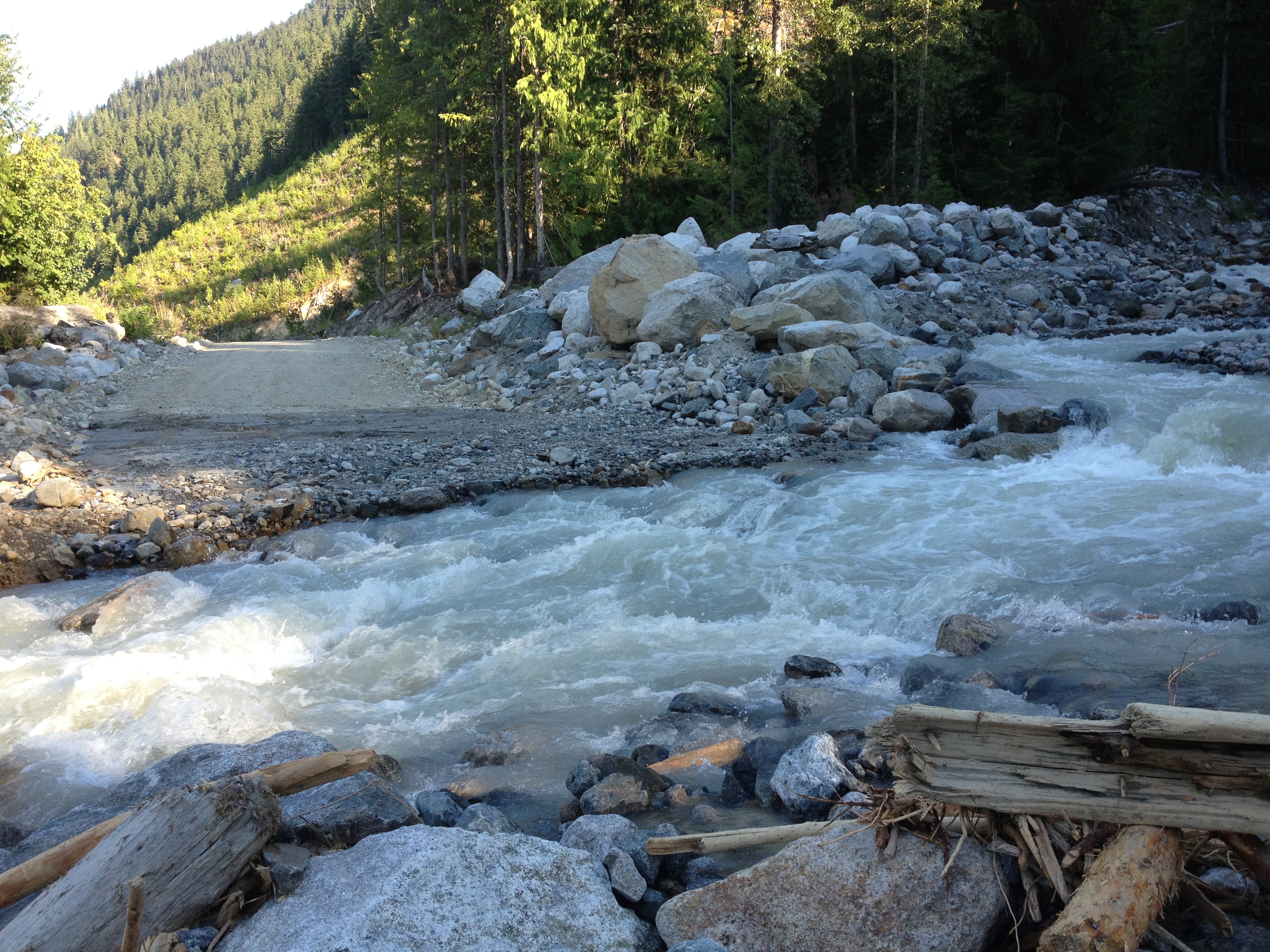 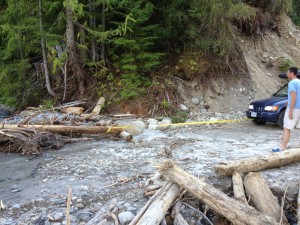 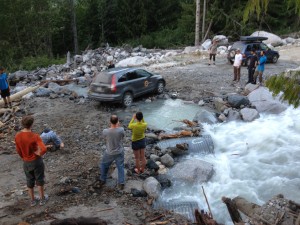 We met in Tim Horton’s in Squamish for food around midnight, and then headed home. It was a great weekend and we had a great group of people. We got a lot done on the route to the Harrison Hut, and the excitement at the end ensured that this would be a trip we wouldn’t soon forget.